This section walks through the different options and considerations for the components required to set up Octopus High Availability in Google Cloud Platform (GCP).

This guide assumes that all of the servers used for your Octopus High Availability instance are hosted in GCP and are running Windows Server.

Octopus High Availability is designed for mission-critical enterprise scenarios and depends heavily on infrastructure and Microsoft components. At a minimum:

IaaS vs PaaS:
If you are planning on using IaaS exclusively in GCP and don't intend to use their PaaS offerings (such as Cloud SQL), then the On-Premises guide might be a better approach for you as management of your virtual machines, Domain Controllers, SQL Database Servers, and load balancers will be your responsibility.

For a highly available Octopus configuration, you need a minimum of two Virtual Machines running Windows Server (ideally 2016+) in GCP.

Each organization has different requirements when it comes to choosing the right Virtual Machine to run Octopus on. Review the range of GCP Compute instance machine families and select the type most suitable for your requirements. If you're still unsure the General purpose machine family is a good option to start with as they are machines designed for common workloads, optimized for cost and flexibility.

Google's Compute Engine also provides machine type recommendations. These are automatically generated based on system metrics over time from your virtual machines. Resizing your instances can allow you to use resources more efficiently.

Due to how Octopus stores the paths to various BLOB data (task logs, artifacts, packages, imports etc.), you cannot run a mix of both Windows Servers, and Octopus Linux containers connected to the same Octopus Deploy instance. A single instance should only be hosted using one method.

Each Octopus Server node stores project, environment, and deployment-related data in a shared Microsoft SQL Server Database. Since this database is shared, it's important that the database server is also highly available. To host the Octopus SQL database in GCP, there are two options to consider:

How the database is made highly available is really up to you; to Octopus, it's just a connection string. We are not experts on SQL Server high availability, so if you have an on-site DBA team, we recommend using them. There are many options for high availability with SQL Server, and Brent Ozar also has a fantastic set of resources on SQL Server Failover Clustering if you are looking for an introduction and practical guide to setting it up.

Octopus High Availability has not been tested with Log Shipping or Database Mirroring, and does not support SQL Server replication. More information

See also the SQL Server Database page, which explains the editions and versions of SQL Server that Octopus supports and explains the requirements for how the database must be configured.

Octopus stores several files that are not suitable to store in the database. These include:

As with the database, you'll tell the Octopus Servers where to store them as a file path within your operating system. The shared storage needs to be accessible by all Octopus nodes. Each of these three types of data can be stored in a different location.

Whichever way you provide the shared storage, there are a few considerations to keep in mind:

Google Cloud offers its own managed file storage option known as Filestore, however it's only accessible via the Network File System (NFS) protocol (v3).

For SMB storage, Google have partenered with NetApp to offer NetApp Cloud Volumes. This is a fully managed, cloud-based solution that runs on a Compute Engine virtual machine and uses a combination of persistent disks (PDs) and Cloud Storage buckets to store your NAS data.

You can see the different file server options Google Cloud has in their File Storage on Compute Engine overview.

To successfully create a NetApp Cloud SMB Volume in Google Cloud, you must have an Active Directory service that can be used to connect to the SMB volume. Please see the creating and managing SMB volumes for further information. It's also worth reviewing the security considerations for SMB access too.

Once you have configured your NetApp Cloud SMB Volume, the best option is to mount the SMB share and then create a symbolic link pointing at a local folder, for example C:\OctopusShared\ for the Artifacts, Packages, TaskLogs, and Imports folders which need to be available to all nodes.

Before installing Octopus, follow the steps below on each Compute engine instance to mount your SMB share.

Once you've completed those steps, install Octopus and then when you've done that on all nodes, run the path command to change the paths to the shared storage:

Changing the path only needs to be done once, and not on each node as the values are stored in the database.

Once you have created a Filestore instance, the best option is to mount the NFS share using the LocalSystem account, and then create a symbolic link pointing at a local folder, for example C:\OctopusShared\ for the Artifacts, Packages, TaskLogs, and Imports folders which need to be available to all nodes.

Before installing Octopus, follow the steps below on each Compute engine instance to mount your NFS share.

Once you've completed those steps, install Octopus and then when you've done that on all nodes, run the path command to change the paths to the shared storage:

Changing the path only needs to be done once, and not on each node as the values are stored in the database.

To distribute traffic to the Octopus web portal on multiple nodes, you need to use a load balancer. Google Cloud provides two options you should consider to distribute HTTP/HTTPS traffic to your Compute Engine instances.

If you are only using Listening Tentacles, we recommend using the HTTP(S) Load Balancer.

However, Polling Tentacles aren't compatible with the HTTP(S) Load Balancer, so instead, we recommend using the Network Load Balancer. It allows you to configure TCP Forwarding rules on a specific port to each compute engine instance, which is one way to route traffic to each individual node as required for Polling Tentacles when running Octopus High Availability.

With Network Load Balancers, you can configure a health check to ensure your Compute engine instances are healthy before traffic is served to them: 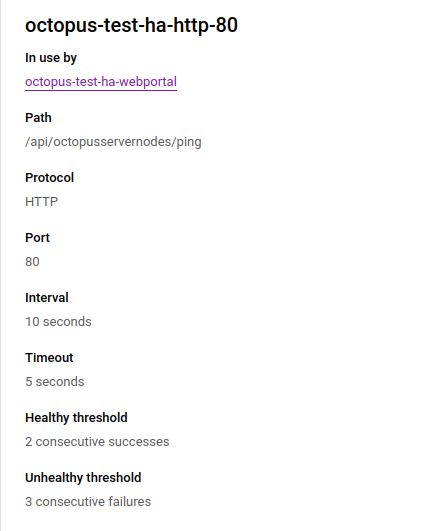 Making a standard HTTP GET request to this URL on your Octopus Server nodes will return:

The Octopus Server node configuration is also returned as JSON in the HTTP response body.

We typically recommend using a round-robin (or similar) approach for sharing traffic between the nodes in your cluster, as the Octopus Web Portal is stateless.

Each node in the cluster keeps a local cache of data including user permissions. There is a known issue that occurs when a users permissions change. The local cache is only invalidated on the node where the change was made. This will be resolved in a future version of Octopus.

To work around this issue, you can configure your load balancer with session persistence. This will ensure user sessions are routed to the same node.

Whilst a Tentacle could poll a load balancer in an Octopus High Availability cluster, there is a risk, depending on your load balancer configuration, that the Tentacle will not poll all servers in a timely manner.

We recommend two options when configuring Polling Tentacles to connect to your Octopus High Availability cluster:

These are discussed further in the next sections.

In this scenario, no load balancer is required. Instead, each Octopus node would be configured to listen on the same port (10943 by default) for inbound traffic. In addition, each node would be able to be reached directly by your Polling Tentacle on a unique address for the node.

For each node in your HA cluster:

The important thing to remember is that each node should be using a unique address and the same port.

It's important to ensure that any firewalls also allow port 80 or 443 for the initial Tentacle registration.

In this scenario, a type of Network Address Translation (NAT) is leveraged by using the same address and unique ports, usually routed through a load balancer or other network device. Each Octopus node would be configured to listen on a different port (starting at 10943 by default) for inbound traffic.

The advantage of using unique ports is that the Polling Tentacle doesn't need to know each node's address, only the port. The address translation is handled by the load balancer. This allows each node to have a private IP address, with no public access from outside your network required.

Imagine a three-node HA cluster. For each one, we expose a different port to listen on using the Octopus.Server configure command:

Next on the load balancer, create Network Address Translation (NAT) rules and point them to each node in your HA Cluster:

If you configured your nodes to use a different listening port, replace 10943-10945 with your port range.

The important thing to remember is that each node should be using the same address and a different port.

There are two options to add Octopus Servers to a Polling Tentacle, via the command-line or via editing the Tentacle.config file directly.

Configuring a Polling Tentacle via the command-line is the preferred option with the command executed once per server; an example command using the default instance can be seen below:

For more information on this command please refer to the Tentacle Poll Server command line options.

Alternatively you can edit Tentacle.config directly to add each Octopus Server (this is interpreted as a JSON array of servers). This method is not recommended as the Tentacle service for each server will need to be restarted to accept incoming connections via this method.

Notice there is an address entry for each Octopus Server in the High Availability configuration.