This section walks through the different options and considerations for the components required when setting up Octopus High Availability for an on-premises install of Octopus Deploy.

The guide assumes that all of the servers are on-premises and are part of an Active Directory domain, as this is the most common configuration. Octopus High Availability can work without the servers being part of an AD domain, but you'll need to vary the instructions accordingly.

While a single server Octopus installation is easy, Octopus High Availability is designed for mission critical enterprise scenarios and depends heavily on infrastructure and Microsoft components. At a minimum:

When running Octopus Deploy Windows Server, the underlying OS can be installed on a bare-metal machine or on a virtual machine (VM) hosted by any popular type-1 hypervisor. Type-2 hypervisors can work for demos and POCs, but because they are typically installed on desktop operating systems, aren't recommended.

Due to how Octopus stores the paths to various BLOB data (task logs, artifacts, packages, etc.), you cannot run a mix of both Windows Servers, and Octopus Linux containers connected to the same Octopus Deploy instance. A single instance should only be hosted using one method.

Each Octopus Server node stores project, environment and deployment-related data in a shared Microsoft SQL Server Database. Since this database is shared, it's important that the database server is also highly available.

How the database is made highly available is really up to you; to Octopus, it's just a connection string. We are not experts on SQL Server high availability, so if you have an on-site DBA team, we recommend using them. There are many options for high availability with SQL Server, and Brent Ozar also has a fantastic set of resources on SQL Server Failover Clustering if you are looking for an introduction and practical guide to setting it up.

Octopus High Availability has not been tested with Log Shipping or Database Mirroring, and does not support SQL Server replication. More information

See also the SQL Server Database page, which explains the editions and versions of SQL Server that Octopus supports and explains the requirements for how the database must be configured.

Since each of the Octopus Server nodes will need access to the database, we recommend creating a special user account in Active Directory with db_owner permission on the Octopus database and using that account as the service account when configuring Octopus.

Octopus stores several files that are not suitable to store in the database. These include:

As with the database, you'll tell the Octopus Servers where to store them as a file path within your operating system. The shared storage needs to be accessible by all Octopus nodes. Each of these three types of data can be stored in a different location.

Whichever way you provide the shared storage, there are a few considerations to keep in mind:

A better alternative is Microsoft DFS or a SAN.

Making a standard HTTP GET request to this URL on your Octopus Server nodes will return:

The Octopus Server node configuration is also returned as JSON in the HTTP response body.

We typically recommend using a round-robin (or similar) approach for sharing traffic between the nodes in your cluster, as the Octopus Web Portal is stateless.

Each node in the cluster keeps a local cache of data including user permissions. There is a known issue that occurs when a users permissions change. The local cache is only invalidated on the node where the change was made. This will be resolved in a future version of Octopus.

To work around this issue, you can configure your load balancer with session persistence. This will ensure user sessions are routed to the same node.

If you don't have a hardware load balancer available, an easy option is the Application Request Routing module for IIS. You can also use Apache or NGINX as a reverse load-balancing proxy. 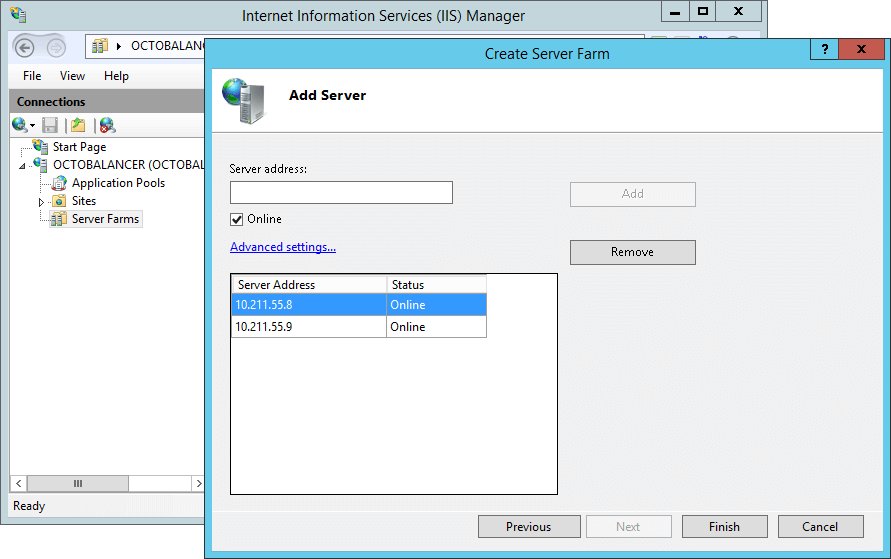 For more information on setting up a reverse proxy with Octopus Deploy we have the following guides:

Whilst a Tentacle could poll a load balancer in an Octopus High Availability cluster, there is a risk, depending on your load balancer configuration, that the Tentacle will not poll all servers in a timely manner.

We recommend two options when configuring Polling Tentacles to connect to your Octopus High Availability cluster:

These are discussed further in the next sections.

In this scenario, no load balancer is required. Instead, each Octopus node would be configured to listen on the same port (10943 by default) for inbound traffic. In addition, each node would be able to be reached directly by your Polling Tentacle on a unique address for the node.

For each node in your HA cluster:

The important thing to remember is that each node should be using a unique address and the same port.

It's important to ensure that any firewalls also allow port 80 or 443 for the initial Tentacle registration.

In this scenario, a type of Network Address Translation (NAT) is leveraged by using the same address and unique ports, usually routed through a load balancer or other network device. Each Octopus node would be configured to listen on a different port (starting at 10943 by default) for inbound traffic.

The advantage of using unique ports is that the Polling Tentacle doesn't need to know each node's address, only the port. The address translation is handled by the load balancer. This allows each node to have a private IP address, with no public access from outside your network required.

Imagine a three-node HA cluster. For each one, we expose a different port to listen on using the Octopus.Server configure command:

Next on the load balancer, create Network Address Translation (NAT) rules and point them to each node in your HA Cluster:

If you configured your nodes to use a different listening port, replace 10943-10945 with your port range.

The important thing to remember is that each node should be using the same address and a different port.

There are two options to add Octopus Servers to a Polling Tentacle, via the command-line or via editing the Tentacle.config file directly.

Configuring a Polling Tentacle via the command-line is the preferred option with the command executed once per server; an example command using the default instance can be seen below:

For more information on this command please refer to the Tentacle Poll Server command line options.

Alternatively you can edit Tentacle.config directly to add each Octopus Server (this is interpreted as a JSON array of servers). This method is not recommended as the Tentacle service for each server will need to be restarted to accept incoming connections via this method.

Notice there is an address entry for each Octopus Server in the High Availability configuration.