Octopus also allows you to run standalone scripts as part of your deployment process. You can run a script on the Octopus Server, on workers or across the deployment targets in roles. You can run scripts contained in a package, or ad-hoc scripts you've saved as part of the step.

You can use all of the features we provide for custom scripts, like variables, passing parameters, publishing output variables, and collecting artifacts.

Choosing where the script will run

The options will vary based on the infrastructure that's available to you. For instance, if you do not have any workers configured you will see the following options:

If you do have workers configured you will see the following options:

If you choose to run the step on a worker, you will also need to select which worker pool Octopus should use for the step.

Choosing the right combination of Target and Roles enables some really interesting scenarios. See below for some common examples:

Bash scripts are not able to be run on the Octopus Server, even if Bash is installed on that server

Choosing where to source the script

You may also select the source of the script, either: 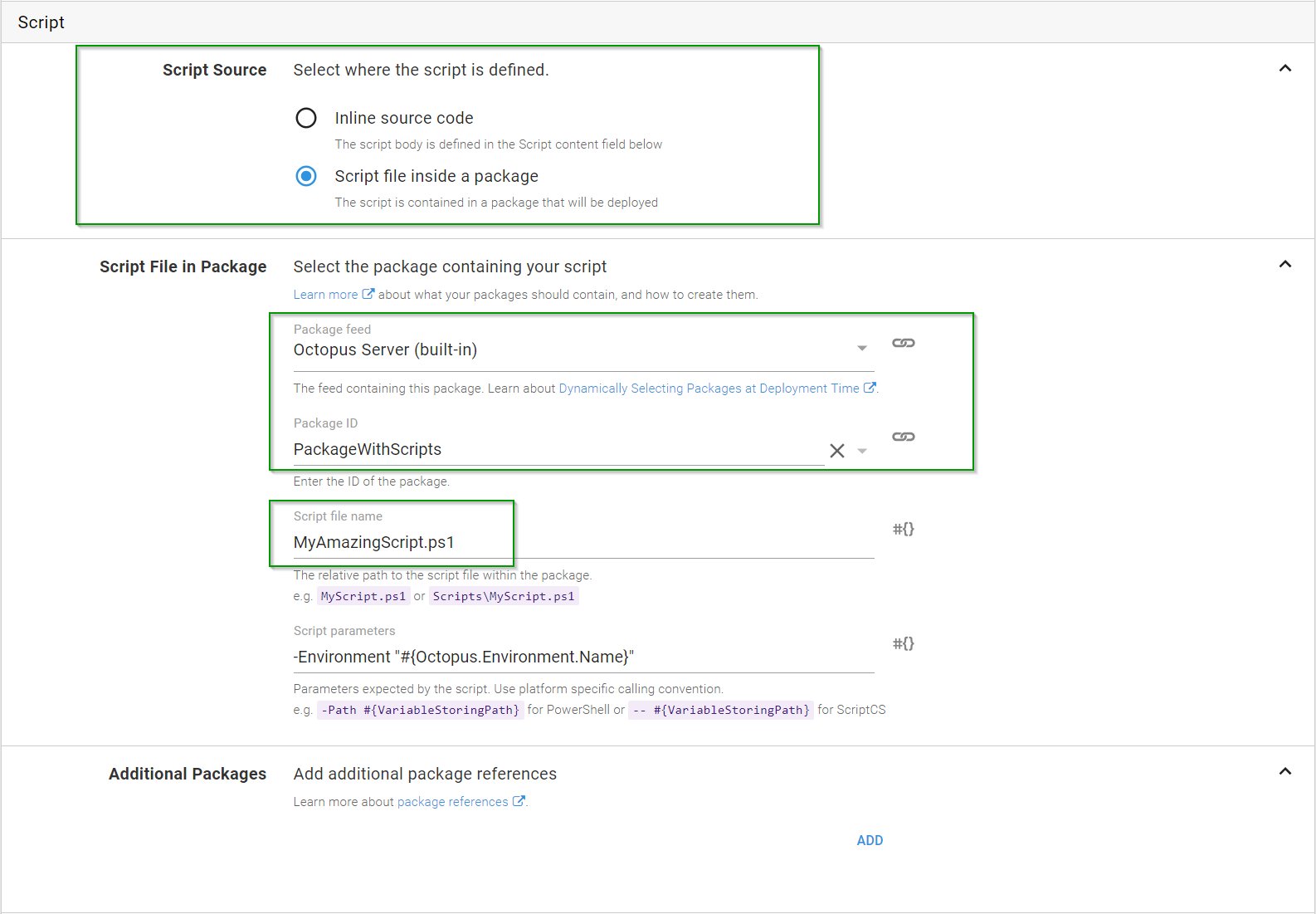 Scripts from packages, versioning and source control
Using scripts from inside a package is a great way to version and source control your scripts. (You can be assured the correct version of your script will be run when deploying each version of your application.) Both methods (ad-hoc versus packaged) have benefits and suit different applications: choose the method best suited to your situation.

When sourcing a script from a file inside a package you cannot choose to run the step before packages are acquired.

When you call external scripts (sourced from a file inside a package) you can pass parameters to your script. This means you can write "vanilla" scripts that are unaware of Octopus, and test them in your local development environment. Read about passing parameters to scripts.

In addition to being able to source the custom script from a package, it is often desirable to reference other packages. Scenarios where this can be useful include: 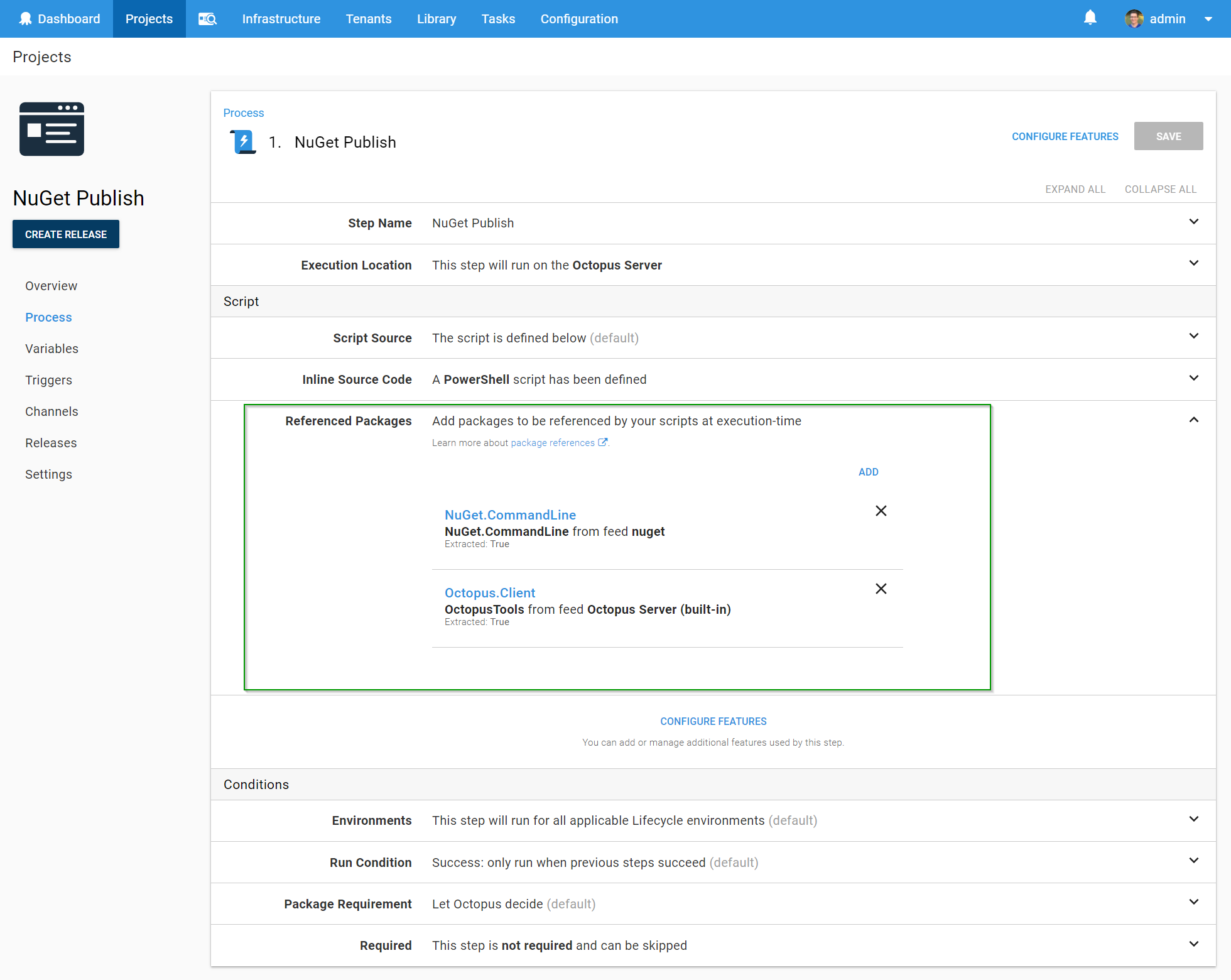 Package references can be added regardless of whether the script is sourced inline or from a package.

When adding a package reference, you must supply:

The ID of the package to be referenced, or a variable-expression.

The feed the package is sourced from, or a variable-expression.

A unique identifier for the package-reference. In general the Package ID is a good choice for the name. The reasons the Package ID may not be suitable as the name include:

Whether the package should be extracted. See below for information on the package file locations. This will not be displayed for certain package-types (i.e. container images). This may also be bound to a variable-expression. 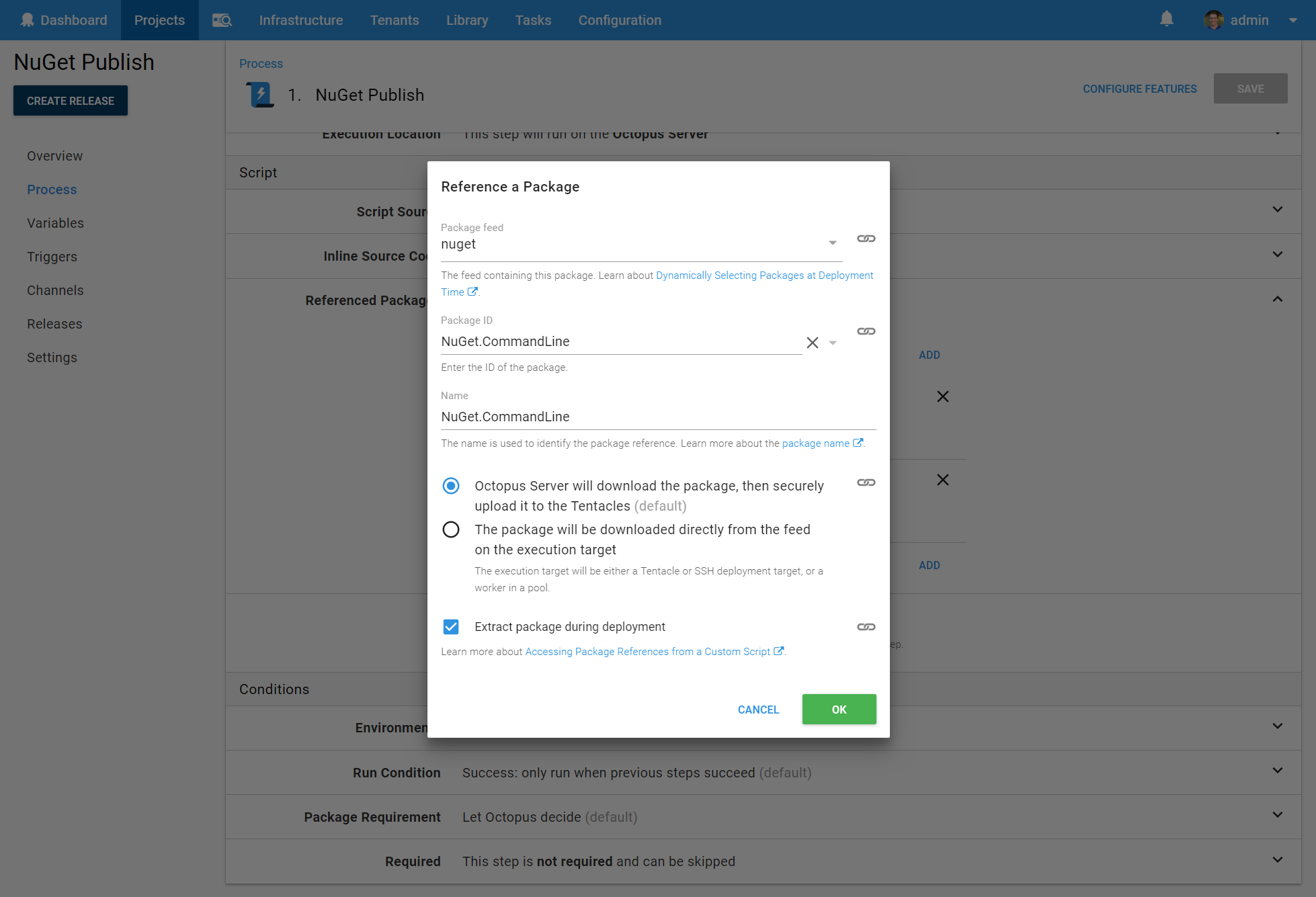 Having added one or more package references, it's reasonable to assume you wish to do something with them in your custom script.

These locations were designed to be convenient for use from custom scripts, as the relative path can be predicted, e.g. ./Acme or ./Acme.zip. If the absolute path is required the variables above may be used.