High-availability groups or clusters have 1 to N nodes, and the nodes are kept in sync by replication. You only need to deploy to the primary node, and replication will apply the changes to all the nodes. Installing a Tentacle on each node will not work as Octopus Deploy will see multiple Tentacles and attempt to deploy to multiple nodes.

SQL PaaS, such as AWS RDS and Azure's SQL, are hosted database servers that don't allow anything to be installed on them.

Don't use the Tentacles on your web or application servers. A recommended security practice is the principle of least privilege. The account used by the website to connect to the database server should have restricted permissions. For example, the website uses stored procedures; the account would only have permissions to execute those stored procedures. Whereas, the account used for deployments needs elevated permissions because that account needs to make schema changes.

Please note: This document only covers the infrastructure side of database deployments. You still need to configure a project in Octopus Deploy to handle the actual deployments.

We recommend using Workers to handle all of your database deployments. Workers have several advantages:

We recommend having separate Worker pools per deployment type.

A worker can be assigned to more than one pool.

To create a new worker pool, go to Infrastructure ➜ Worker Pools and then click on the Add Worker Pool button:

In the modal dialog, add the name of the worker pool you wish to add:

Once you click the Save button, you will be presented with the Worker Pool maintenance screen. Your options are:

When you add a worker to the pool, you are given a choice of listening, polling, and in the case of Linux, SSH:

After you've added a Worker pool, a new option will appear in the deployment process, giving you the option to run once on a Worker, and which Worker pool should be used. 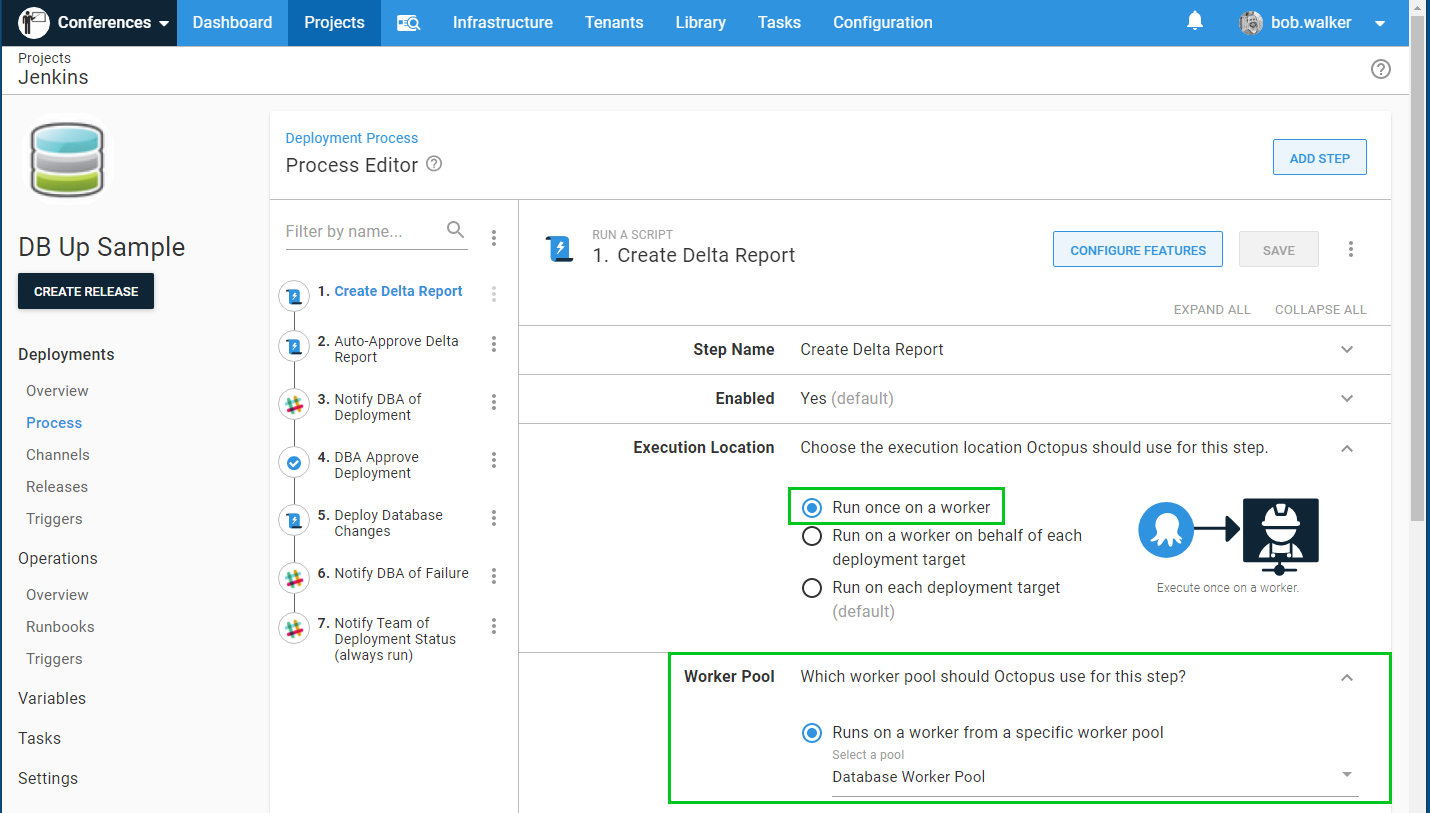 Certain steps do not let you to pick a Worker pool. That list includes Deploy to IIS, Deploy a Windows Service, and Deploy a Package. If you are using a step template that relies on that functionality, you need to use jump boxes.

A common security practice is to leverage Active Directory service accounts. But each environment has its own service account. The account that deploys to Development is prevented from deploying to Test. The account that deploys to Production is prevented from deploying to Development. This is accomplished with integrated security and running the Octopus Tentacle as a specific user account. This approach needs a Worker pool per environment: 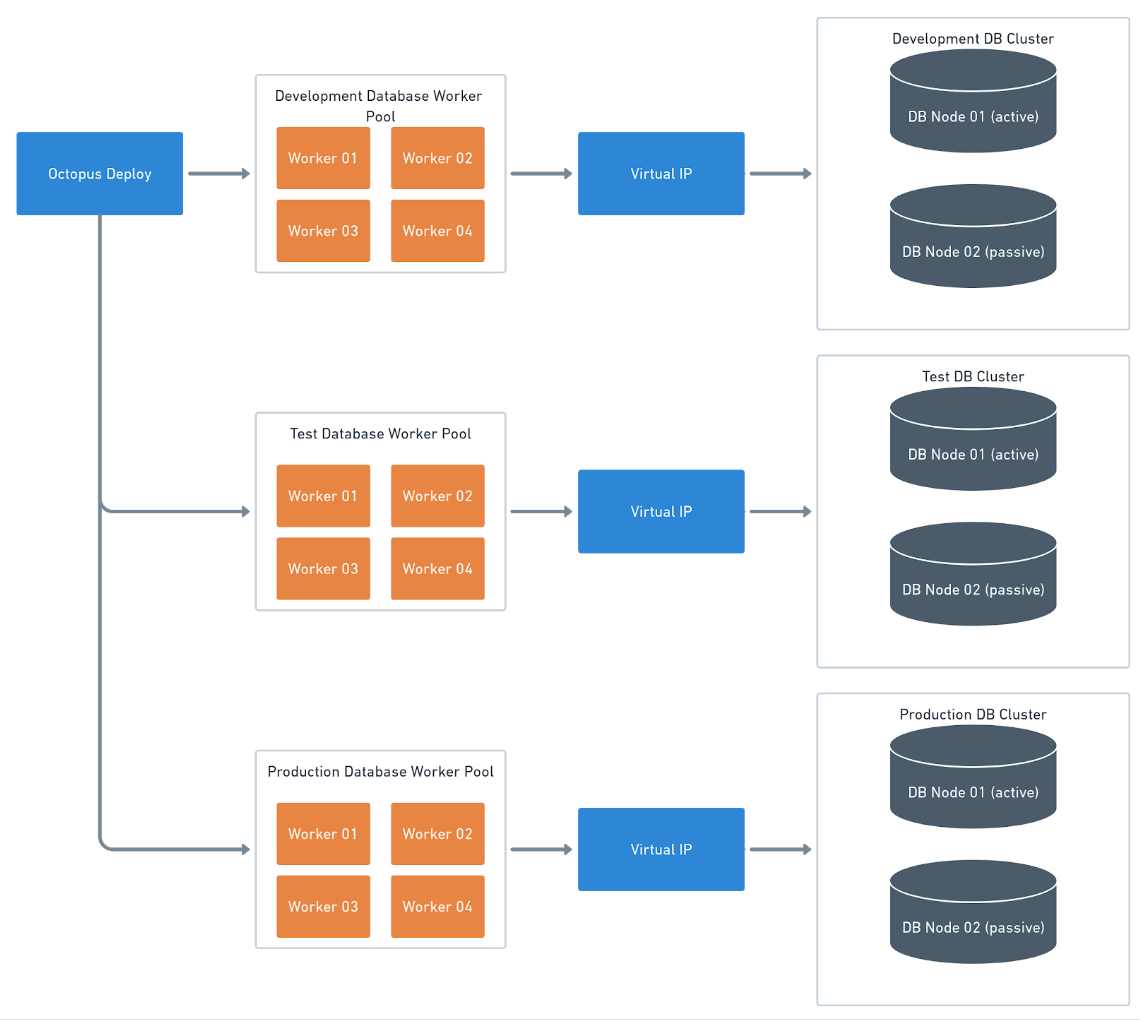 To start, create a dedicated Worker pool for each environment:

In your project variables, or in your variable set, create a new variable. Click the Change Type option and select Worker Pool: 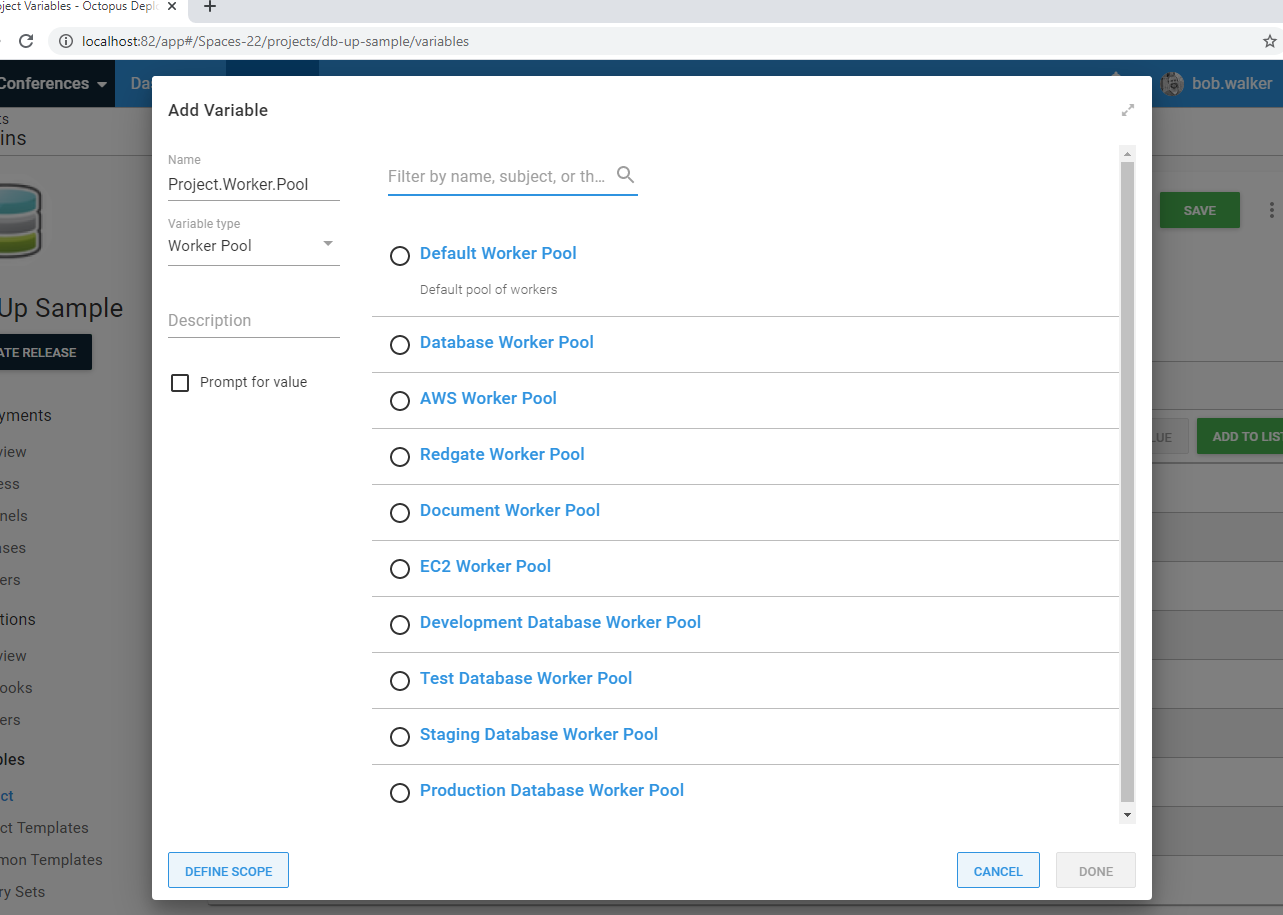 With that option, you can scope Worker pools to specific environments:

In the deployment process, a new option has appeared under Worker pool Runs on a worker from a pool selected via a variable. Update the desired steps to use that variable: 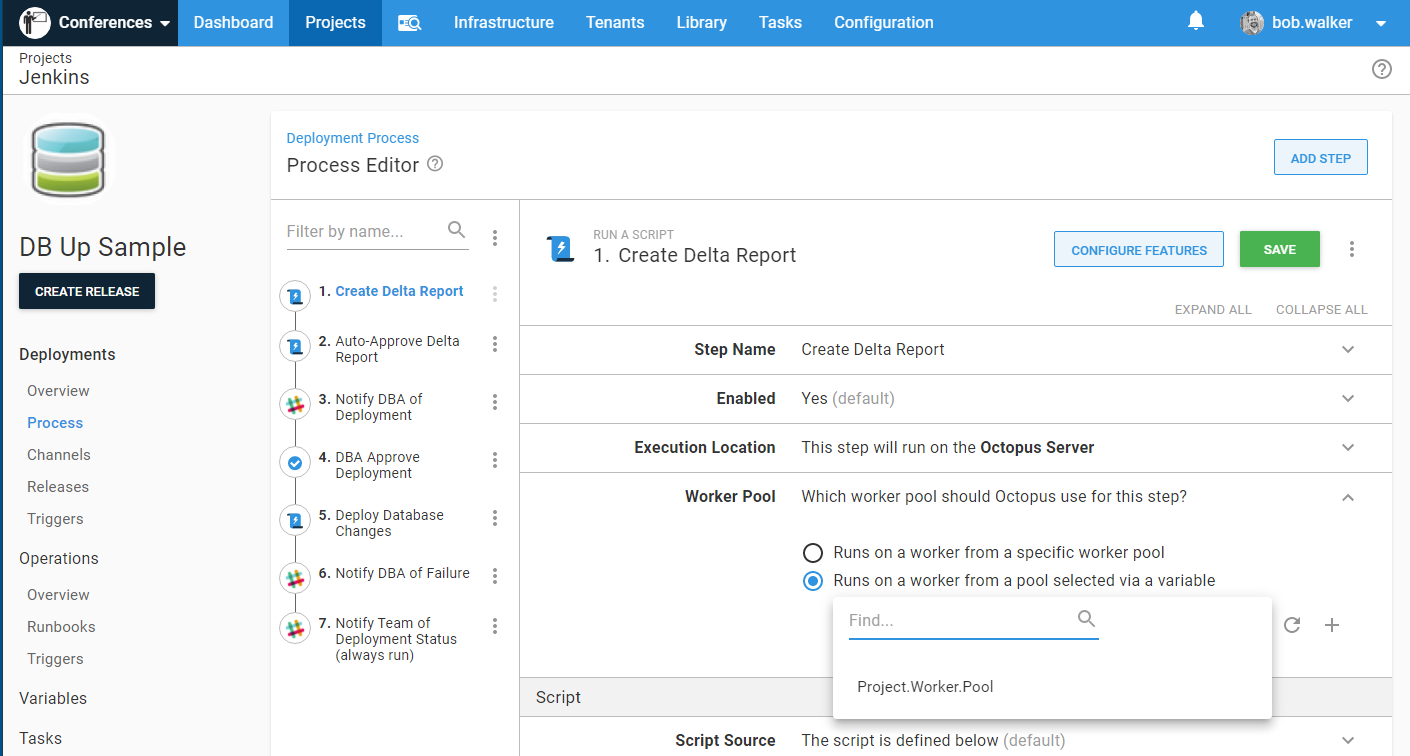 If you are using a version of Octopus Deploy prior to 2020.1, the process is slightly different. To start, create a dedicated Worker pool for each environment:

Cloud region deployment targets do not count against your license.

Create a cloud region for each environment. In this example, a new role called DbWorker was created for these cloud regions. This will help differentiate these new deployment targets. Make a note of the Worker pool for that cloud region, and select the one that matches your environment of choice: 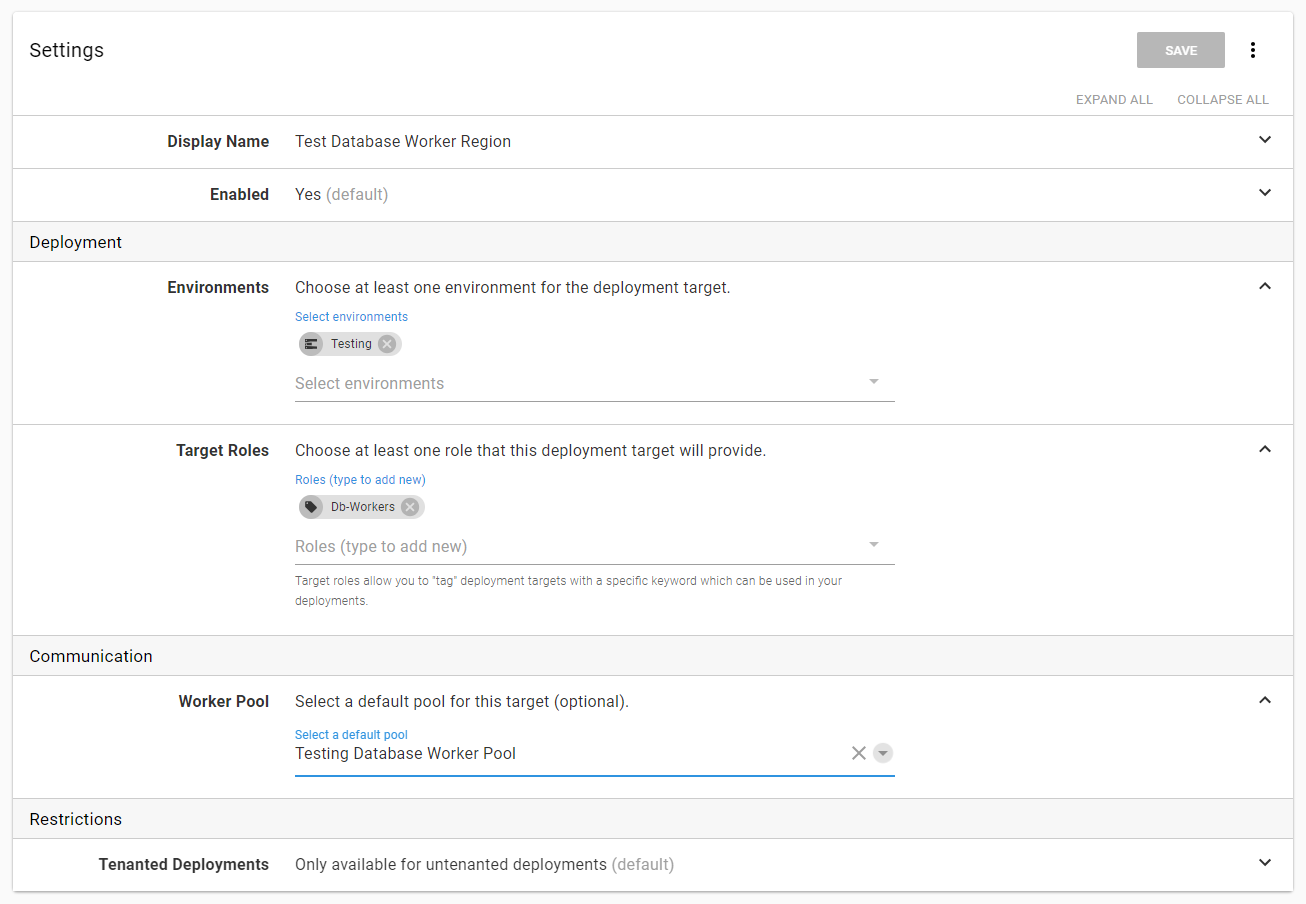 When done, you will have a cloud region per environment: 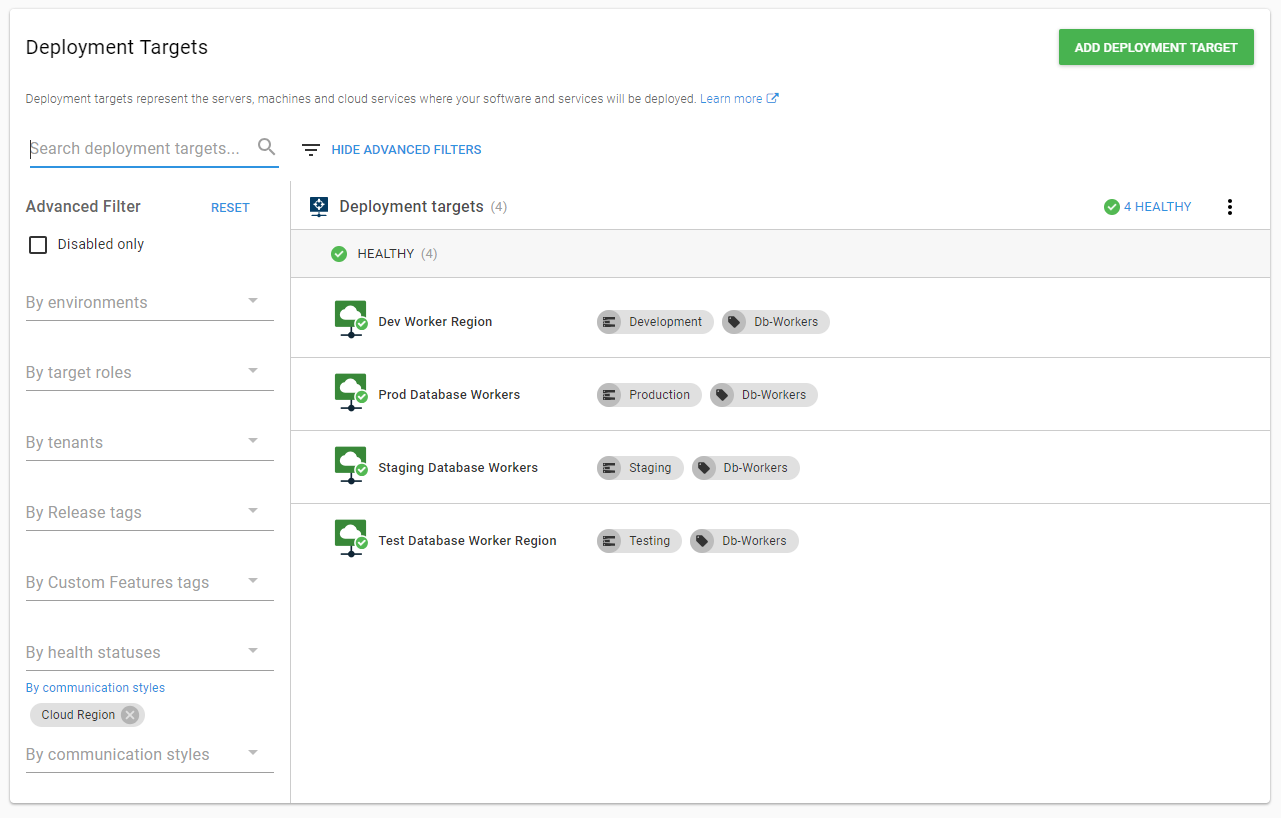 The execution location will now be a target role, which is why the DbWorker role was created. That tells the deployment to use the new cloud region. The cloud region will use the Worker pool: 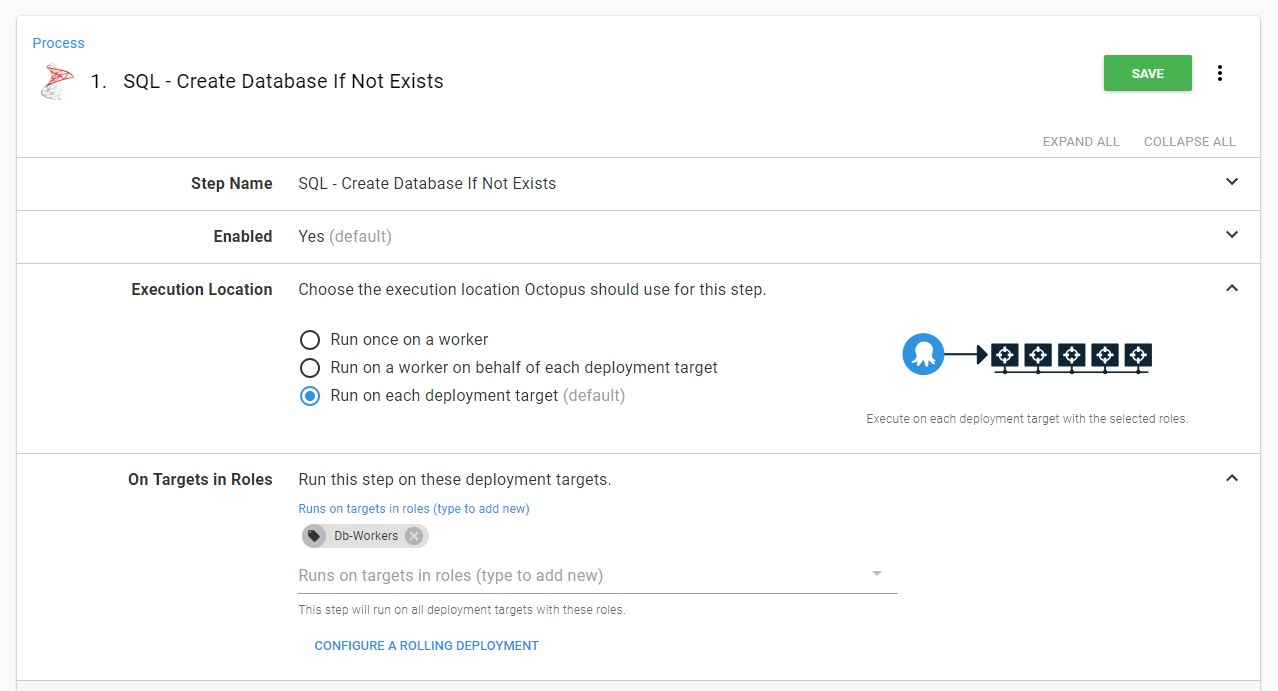 That step needs to be repeated for each step in the process: 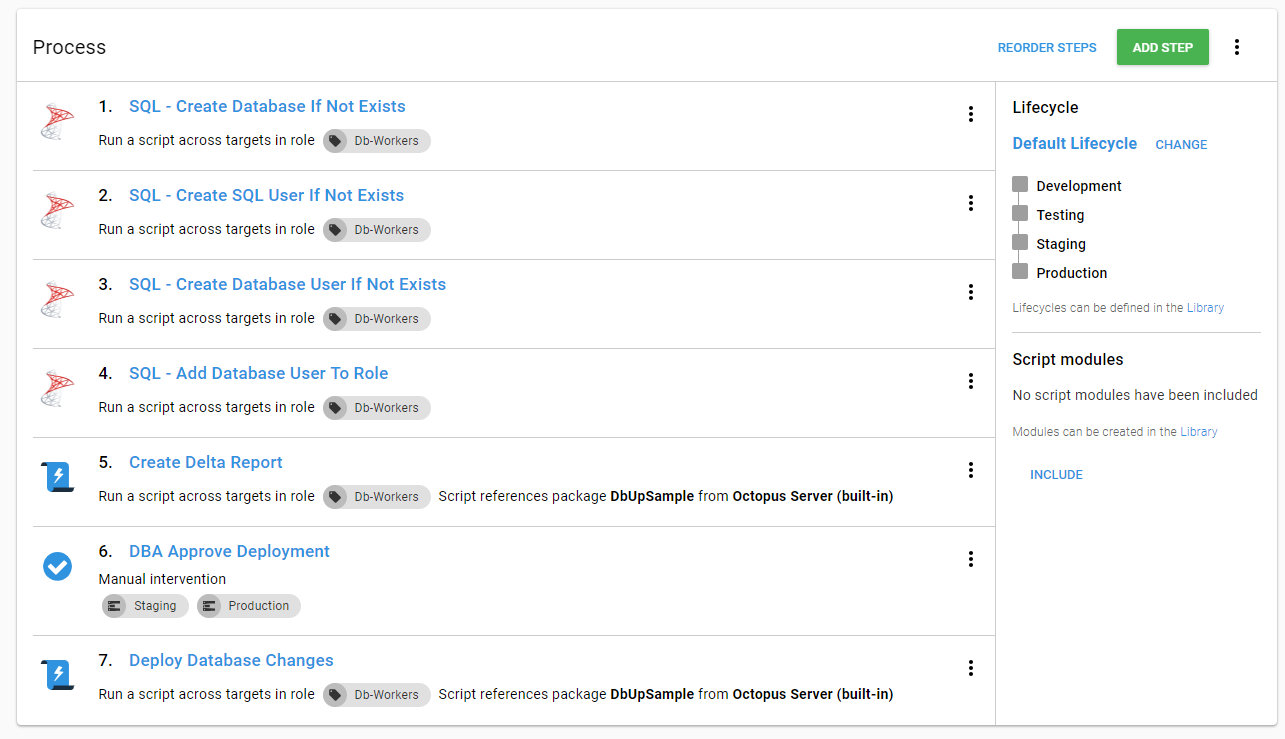 When a release is performed, it will use the environment-specific Worker pool. In the example below, a new release to the Test environment was done using the Test Database Worker Region: 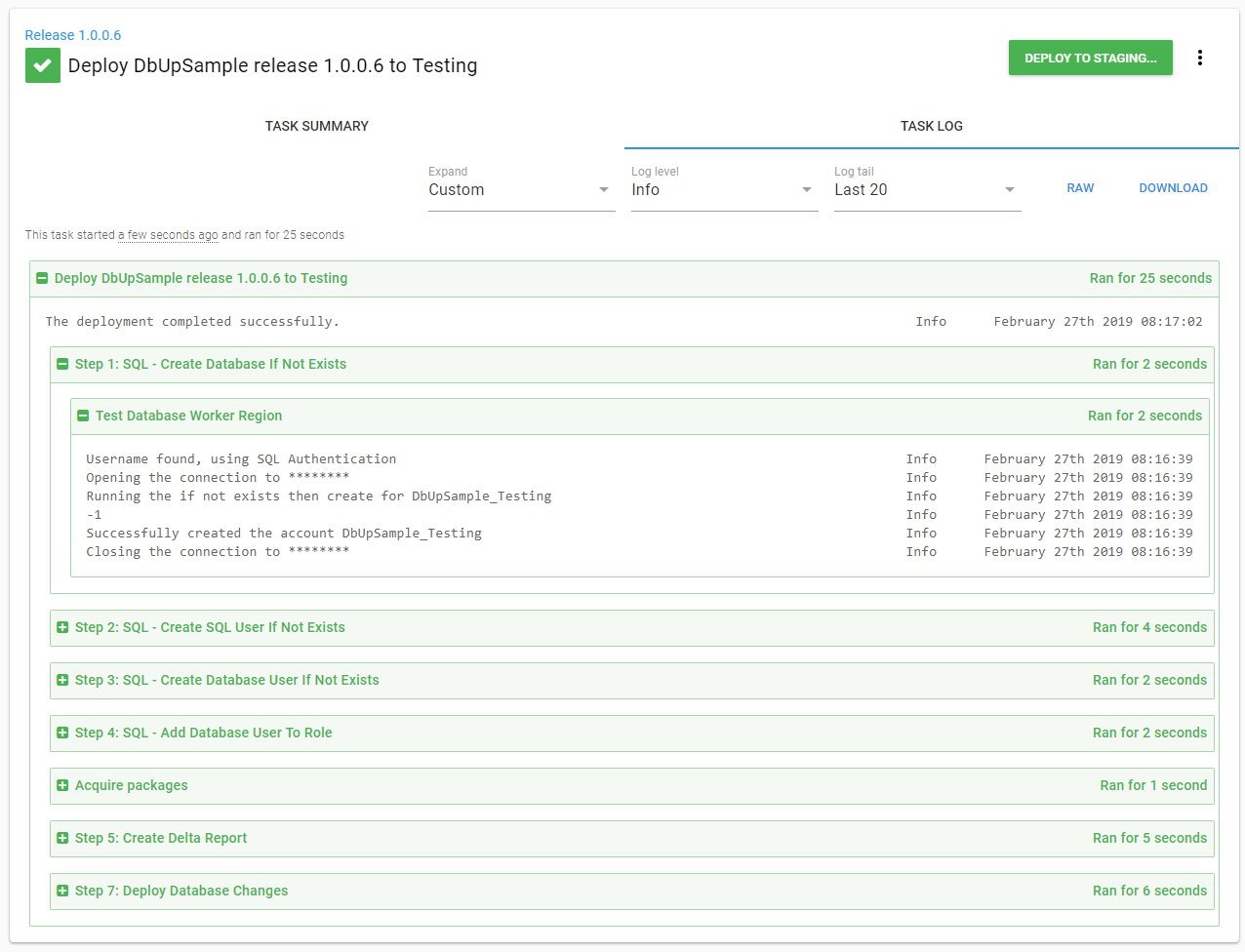 Database deployments with Tentacles on a jump box

If you are using an older version of Octopus Deploy, or your license limits you to one worker, then you need to install Tentacles on a jump box. The jump box sits between Octopus Deploy and the Database Server VIP. The Tentacle is running as a service account with the necessary permissions to make schema changes. The tooling you chose for database deployments is installed on the jump box:

In the event of multiple domains, a jump box is needed per domain. This might be seen where there is a domain in local infrastructure and another domain in a cloud provider such as Azure. As long as port 10933 is open (for a listening Tentacle) or port 443 (for a polling Tentacle) Octopus will be able to communicate to the jump box.

It is possible to install many Tentacles on a single server. Please managing multiple instances for more information. 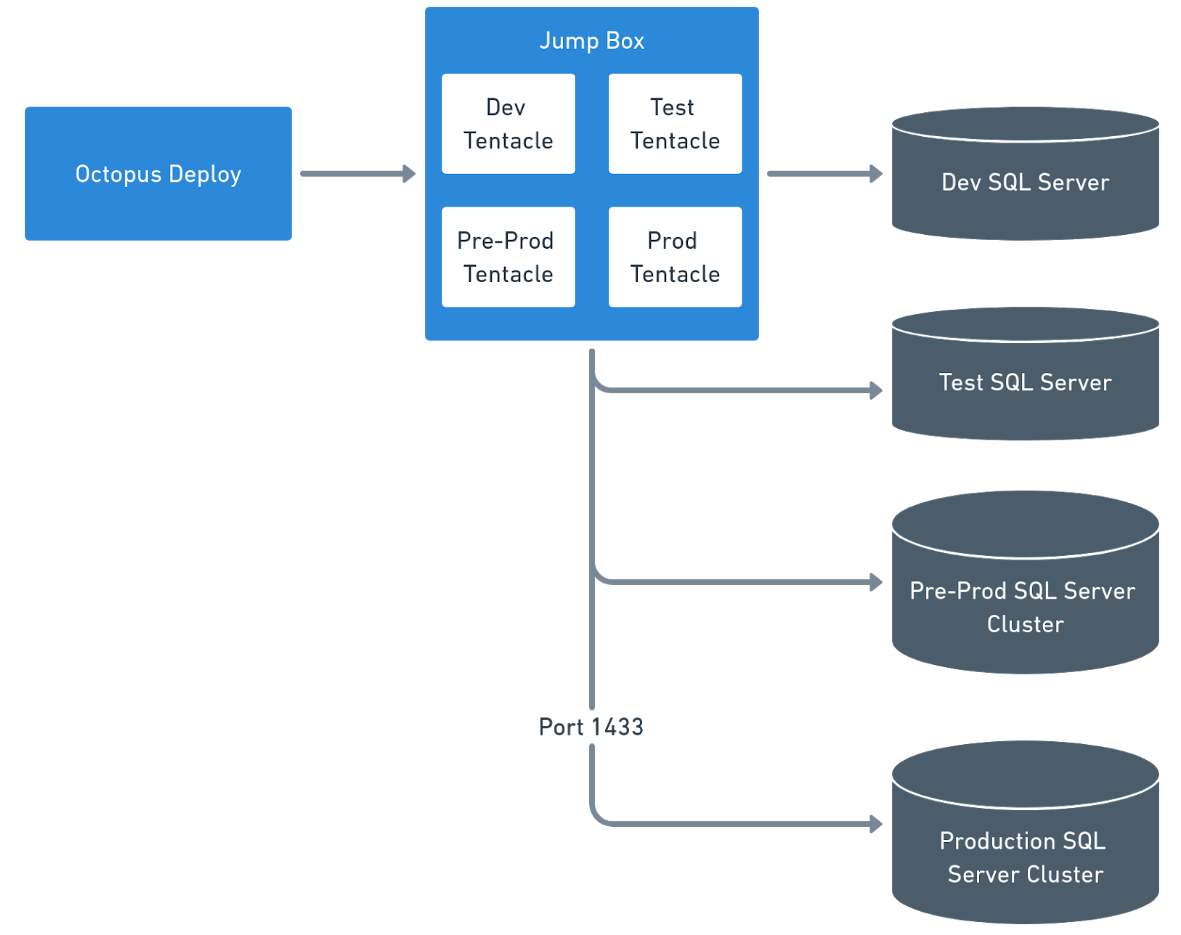