To demonstrate some of the basic functionality provided by the new Docker steps, we will walk through the process of starting two containers that can communicate with each other through their own isolated network. The first container will simply start and run a non exiting process, while the second container will ping the first to demonstrate connectivity. As part of this we will set up an external feed to DockerHub and include a cleanup task to remove existing containers. We will use a Linux machine which has the latest version of Docker installed and has network access to retrieve images from Docker Hub.

Windows Containers on Windows Server
While Docker Containers on Windows Server (not Docker for Windows through Docker Toolbox) are now generally available, this feature appears to still have some issues with key areas such as networking. This is an area that the Docker and Windows team are actively improving. While deploying a Windows Container to a Tentacle target on Windows should work, you may experience issues trying to use custom networks or volumes. We would suggest using Linux targets via SSH for the time being until this feature stabilizes.

If you already have a working Linux machine with Docker Engine installed you can use that once you have configured it as an SSH Target in Octopus.

If not, you will need to configure a host for our sample application. We recommend using Ubuntu Trusty 14.04 LTS or Ubuntu Xenial 16.04 LTS for this sample. 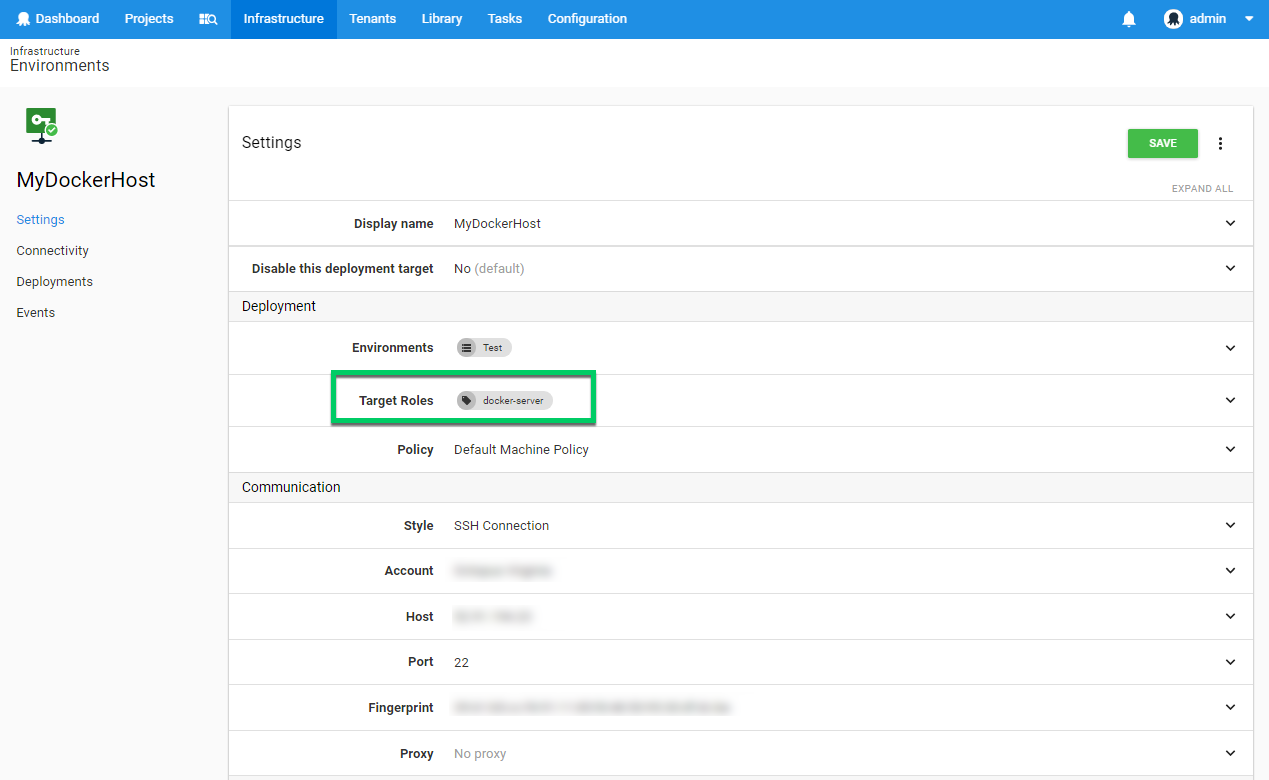 You should now be ready to deploy Docker containers to your Ubuntu machine using Octopus Deploy.

Next we are going to create a connection to the official Docker Hub registry so we can use those images for this demonstration. 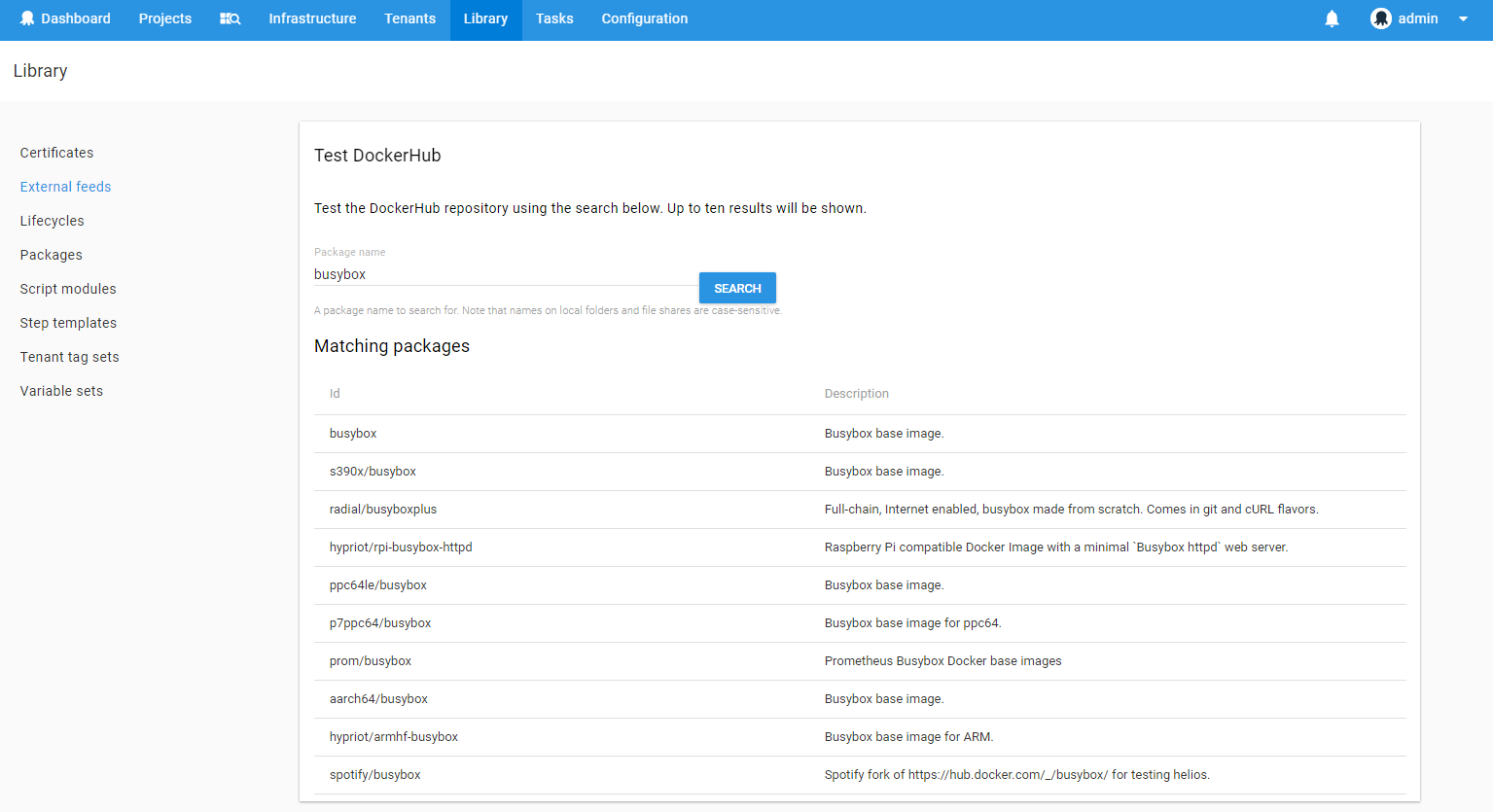 In a newly created project, click Add Step ➜ Create A Docker Network. This step manages parameters that will be passed to the docker network create command.

docker network support
Keep in mind that as the Docker Network Octopus step simply wraps the docker network command, you will need to ensure your installed version of docker-engine supports this command. This was provided as of the 1.9.0 Docker Engine release.

For detailed information about Docker networking and additional arguments you can provide, we suggest reading the Understand Docker container networks and the network create Docker documentation.

From the project process page, add a new step via Add Step ➜ Run A Docker Container. This step helps you configure the parameters that will be passed to the docker run command.

Using output variables from Docker Inspect
Once Octopus creates the network in the previous step, it invokes the docker network inspect command and stores the JSON output in an output variable. This data contains all the information about the network and we will use the network name to signify to the container that it should connect to that network. All the values of the inspect command can be accessed with standard variable substitution syntax.

Container entry point
The command itself is arbitrary, what is important is that we start a process that keeps running to keep the container alive. Since Octopus starts these containers in detached mode, the containers by default are configured to exit when the root process used to run the container exits. This ping command will be treated as the root process and by not stopping, means that the container itself will keep running until we tell it to stop (or the pinging itself fails and terminates). Typically you would be less likely to actually supply this command argument through Octopus as you would probably supply a startup command or entry point in your DockerFile when you create your image. 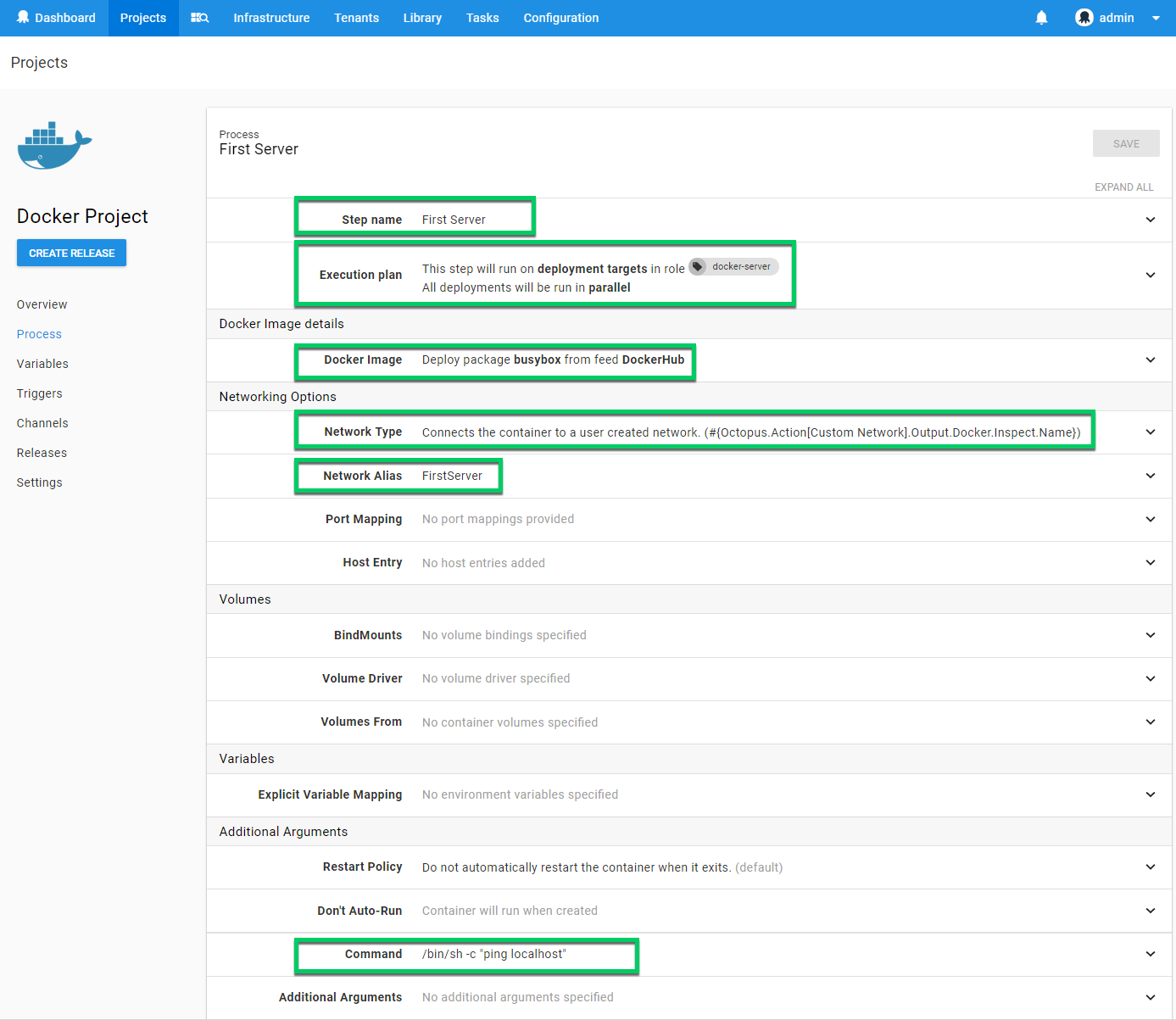 Now we will create a second container, exactly the same as the first using busybox, but this container will connect to the first container to demonstrate how containers can communicate in a docker network.

Some other options include passing through all variables to the container through an environment file or pulling files out of the container, performing variable replacement, and then pushing the files back in using the layered file system, before starting the container up.

We would love to hear about your thoughts and feedback on these options!

Now we need to create a single Project Variable used by the second container to control how many pings to perform before exiting.

Although we could deploy a project as many times as we want with a Docker run step, increasing the number of running containers, you may want to stop containers run from previous deployments before or after creating a new container from the same Image. For this reason we have included the Stop a Docker Resource deployment step. This allows you to configure previous containers or networks to stop (and optionally remove them) before or after any other step in your deployment process. In this case because we are creating a network with a specific subnet, to avoid clashes with networks created as a result of a redeployment we will simply remove everything previously created from this project before the network is created. In your case however, you may want to create multiple stop steps throughout your process before or after each specific container starts. Provide the details as shown below and rearrange to run as the first step of the deployment.

As one final step we will write out to the logs the IP addresses of the containers that were created, as well as show the ping results of the second container from the Docker logs.

Advanced variable parsing and inspection
Note that to access the IP address of the two containers we are using the results of the inspect information that is extracted right after they are created. This also means that if your container configuration changes after they were created, the inspect information may be outdated. In addition since containers can be added to multiple networks, to get the IP address corresponding to the network we have created, we also need to index the network using an inner variable that resolves to the network name.

To see the full results of the inspect command try echoing out the variable just up to the Inspect section (i.e. #{Octopus.Action[First Server].Output.Docker.Inspect} ). This will return a large JSON blob that the variable parser, Octostache, is now able to traverse. 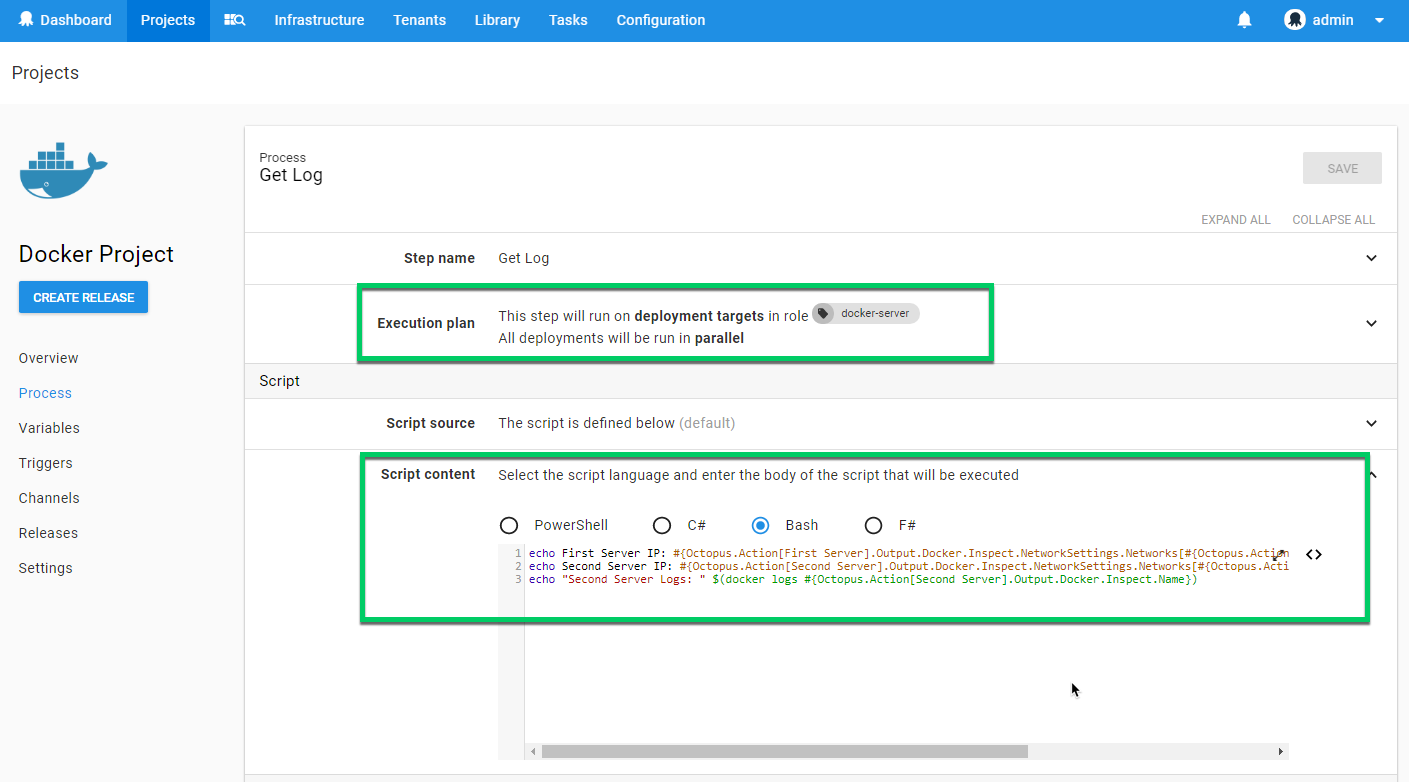 Creating a release of our Docker project

From this point forward, the deployment will follow the same process that you should be comfortable with: Good old Octopus Releases.

Go ahead and create a release of your Docker Project. 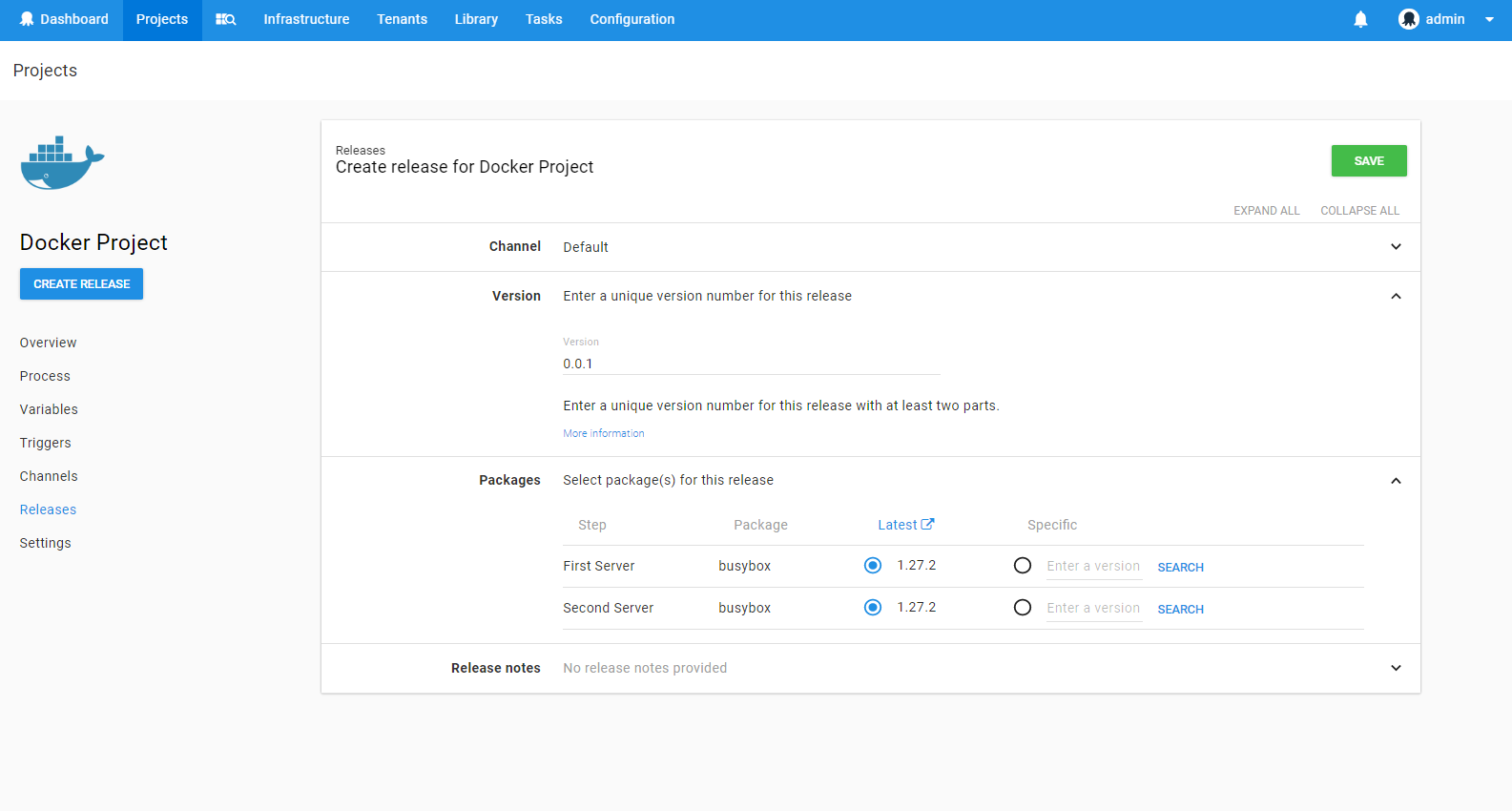 Creating releases based on Docker images
When creating a release, the Octopus Server will query the Docker registry to retrieve the list of tags for the image selected in the run steps. The tags are then parsed to a Semantic Version where tags that cannot be parsed will be excluded. You will be given the option to select the version of the container that will be used in the deployment.

Note that "latest" in Octopus is the "highest" Semantic Version and not the image tagged with "latest".

Deploying a release of our Docker project

Looking at the results of a deployment you will see some logging indicating the work being performed.

Having problems deploying to Docker?
Usually this will come down to problems with the Octopus Account you configured accessing the Docker daemon with messages like this:

Cannot connect to the Docker daemon. Is the docker daemon running on this host?

To identify containers and networks that need to be stopped, all resources created through an Octopus deployment are configured with labels that contain the project Id, release Id, deployment Id and if applicable, tenant Id. When the clean step is then run, the available networks and containers are then filtered based on the parameters supplied in the step configuration. When a container is flagged to be removed first all linked containers will be disconnected from that network. For containers, all relevant containers are first stopped via the docker stop command and then removed. This provides your process time to gracefully end by receiving the SIGTERM signal before being killed.

The Docker equivalent of the "Package Acquisition" phase involves retrieving the images from the registry using the docker pull command on the target itself. This ensures that the target has the latest copy of that image however due to the nature of containers this will incur next to no bandwidth if it is already up to date. If a newer version of an image is retrieved than is available locally, then it is possibly that only a single "layer" of the image needs to be retrieved and so again, the bandwidth usage is minimized. Note that if credentials are required for the registry, then a docker login command is first issued. This will use either the hostname of the registry URI provided, or the Registry Path explicitly provided when setting up the feed. There is currently no "push to target" capability for images in Docker steps.

When creating a network or container, the name and Id as simply echoed to the standard logs. The verbose logs will show the docker version on the target, the full docker command being called and if successful, the results of the inspect command that are passed to an output variable.

In the case of our simple scenario above, the final step should display the IP address of the containers, within the bound of the subnet specified by the configured network, as well as a line from the second container's ping command showing connectivity to the first container.