When you register a deployment target, you must provide at least one environment and one target role. 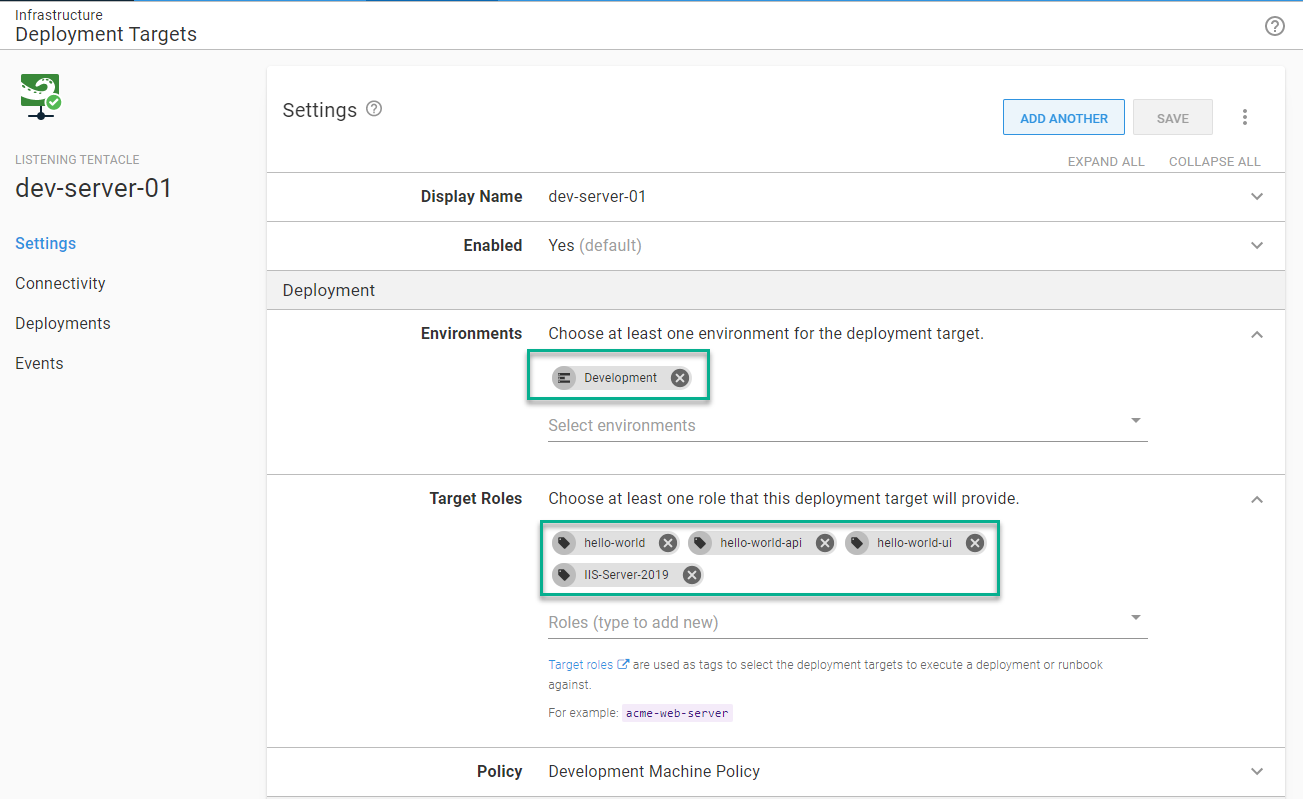 In the deployment process, you assign steps to run on specific roles. 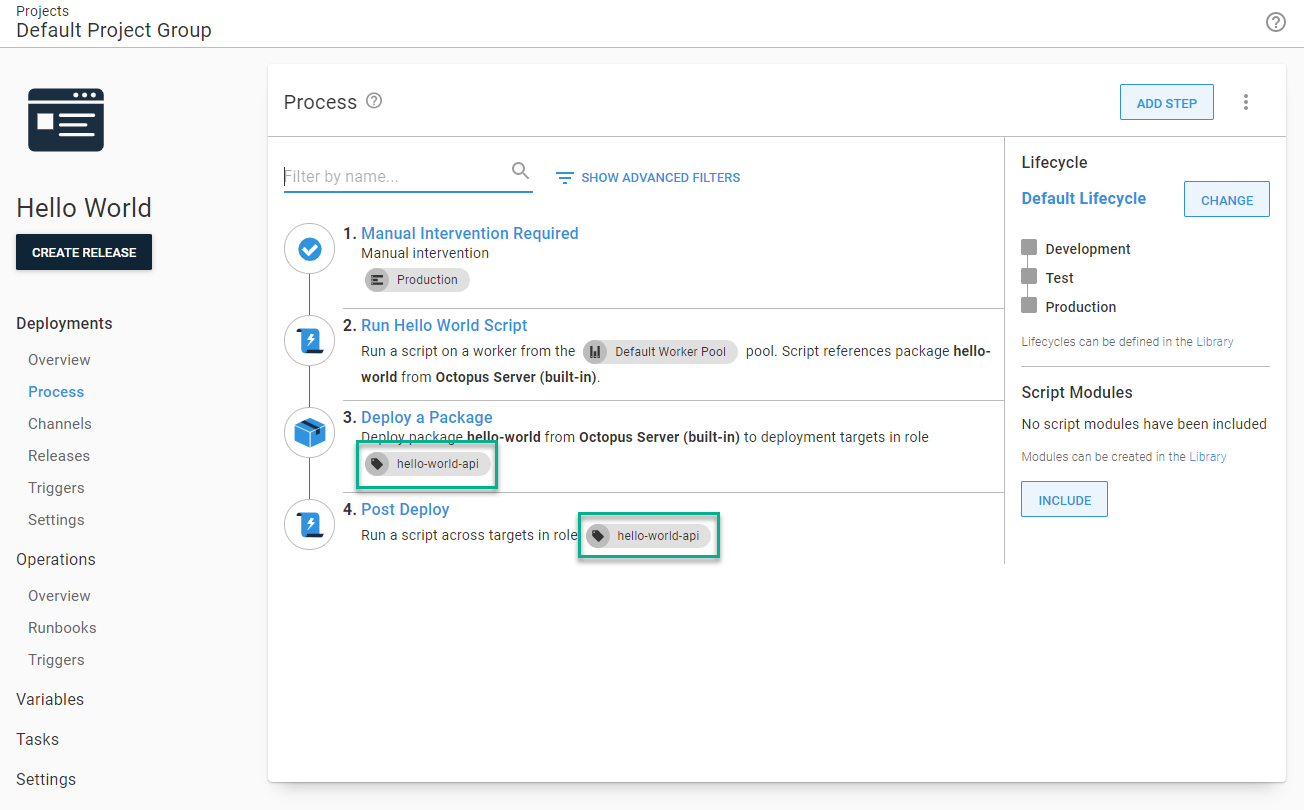 For example, imagine you have three deployment targets in the development environment with the following roles 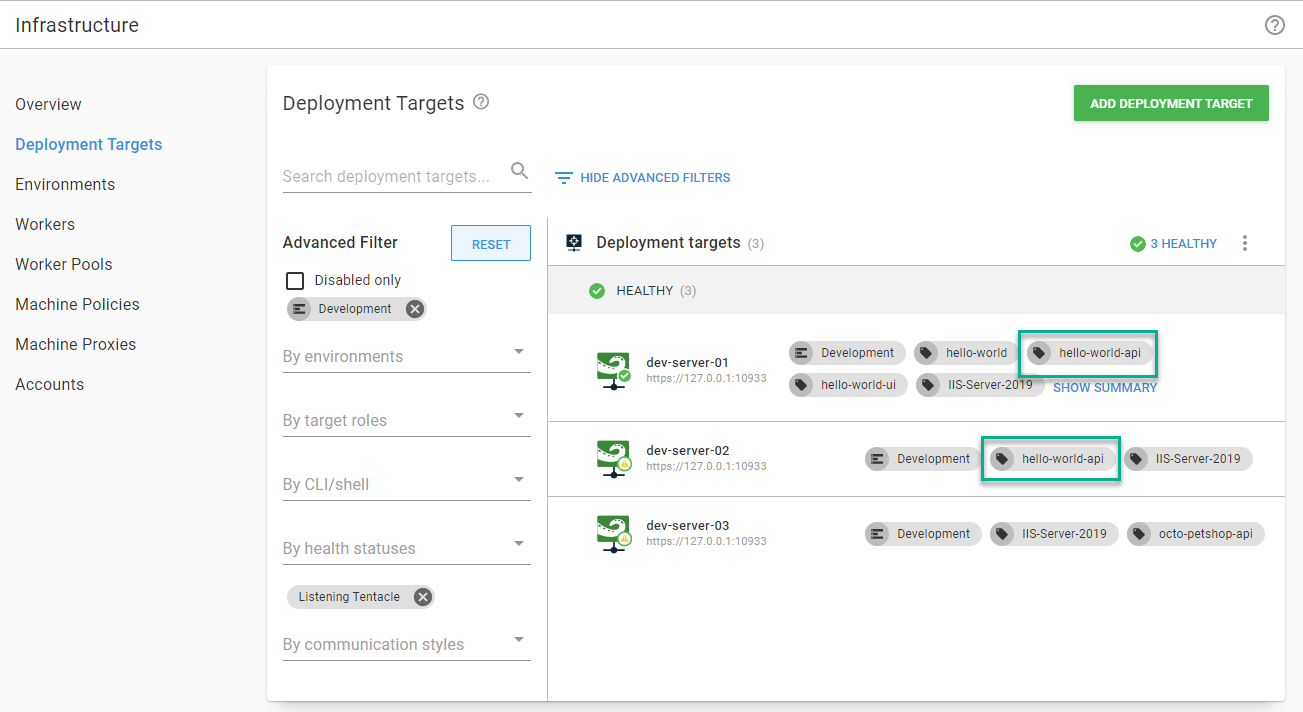 Assigning multiple roles to a deployment step results in an OR statement. For example, adding octo-petshop-api to the deployment process and deploying to development will result in the filtering logic to be:

All servers in the development AND the servers who have the roles hello-world-api OR octo-petshop-api.

For the software developers you can rewrite that sentence as:

Using the example from above, Octopus would select all three servers.

Environments are designed as a macro grouping of deployment targets meant for use across multiple projects, library sets, and more. Below is a list of items where environments are used:

Target roles are designed as a micro grouping of deployment targets meant to deploy a specific project or application component. Below is a list of items where roles are used:

A deployment target can be assigned to 1 to N environments and 1 to N roles.

Adding an environment is a non-trivial task, as it involves adding/updating additional deployment targets, variable scoping, lifecycles accounts, certificates, and more. There is a direct correlation between a high number of environments and poor maintainability, usability, and performance.

Our recommendations for environments are:

Anti-patterns to avoid are:

Using the generic role web-server will pick all the servers in a specific environment. For example, you have 25 servers in production with the role web-server. When you deploy to production, Octopus will pick all 25 servers, but you only want to deploy to 4 of them. There is no automatic way to limit the servers picked without either creating a specific role hello-world-api or creating a new environment.

Generic roles also impact your future flexibility. For example, using web-server for 100 projects would require all targets on all environments to host those same 100 projects. If you were to decide in six months to split up those servers, you'd have to update over 100 projects.

Our recommendations for target roles are:

Add an environment for a business need; a new data center is brought online, you are adding your disaster recovery location into Octopus, or adding the ability for customers to test changes prior to production.

Add a new role to group servers and filter servers within each environment.