A release is a snapshot of the deployment process and the associated assets (packages, scripts, variables) as they existed when the release was created. The release is given a version number, and you can deploy that release as many times as you need to, even if parts of the deployment process have changed since the release was created (those changes will be included in future releases).

When you deploy a release, you are executing the deployment process with all the associated details, as they existed when the release was created.

You can deploy a release as many times as you want to. 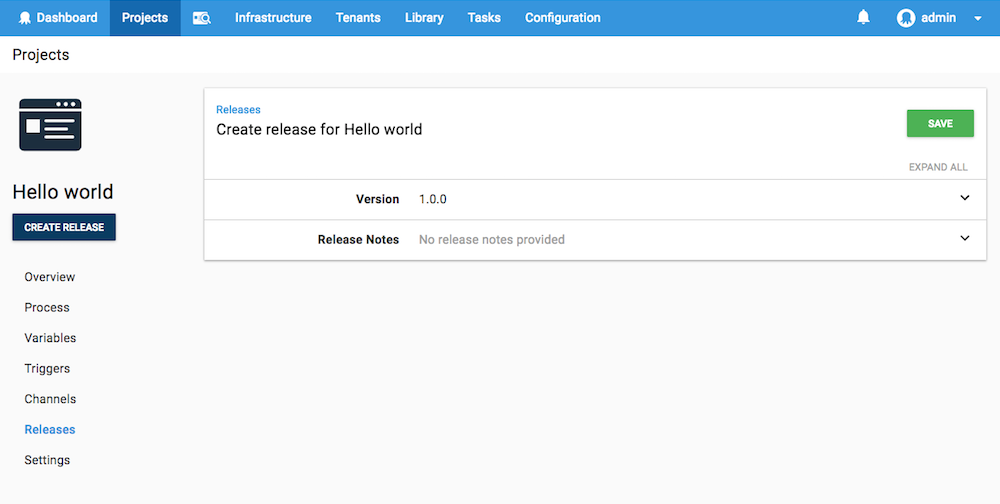 You can fully automate your build and deployment pipeline, so that the releases are generally created automatically. For more information on this topic, see our build server documentation.

By navigating to the project's overview page and selecting Releases, you can see all the releases that have been created for the project. If you want to deploy a release or schedule a deployment, click on the release.

After creating the release, if the lifecycle associated with the project is configured to deploy automatically to its first environment, the release will start to be deployed as soon as the release is created.

Deployments scheduled for the future can be viewed under the Project Overview page, on the Dashboard, and the Tasks section of the Octopus Web Portal.

Scheduling deployments with the Octopus CLI

For everyone using the Octopus CLI, you can use the following option:

Guide failure mode asks for users to intervene when a deployment encounters an error. Learn more about guided failures.

Deploy to a specific subset of deployment target

For each release you create, a snapshot is taken of the project variables. You can review the variables in the Variable Snapshot section of the release page by clicking SHOW SNAPSHOT. This lets you see the variables as they existed when the release was created.