Often, deployment is an afterthought. We build applications, and hit F5 from Visual Studio to test if they work. Eventually, someone has to figure out how to deploy that application into different environments. And depending on the application, that can range from being an easy job to a task of monumental complexity.

There's no quick fix, but hopefully some of the strategies below can help to make deployments easier.

During the course of building an application, we make decisions about frameworks, components, and application architecture as we build (or prepare to build) features. During these times, it's important to also think about how these decisions impact upon deployment. Ask questions like:

Ignoring these issues is a great way to guarantee pain at deployment time.

Automate what you can

Octopus includes a manual deployment step for this reason. You can run a series of automated steps, wait for a human to perform an action, and then continue the automated steps. 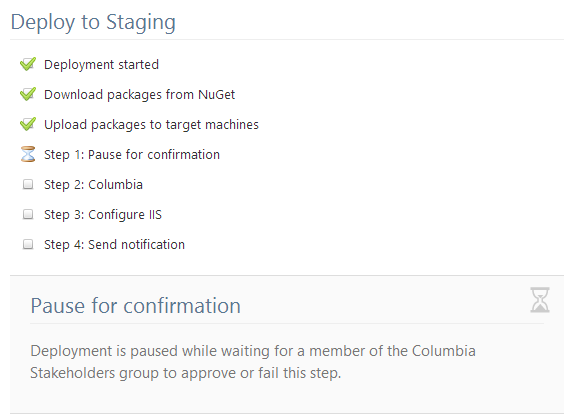 Following conventions, or creating your own where none exist, can be a great way to reduce the amount of work involved in automating deployments. In other words, practice DRY. Some areas you can try to follow conventions around are:

Rather than relying on your deployment tool of choice to perform the bulk of the configuration and deployment work, consider making your application deployment-aware. For example:

Making your application "self-deploying" can have great benefits, and decouples you from your deployment tool.

Don't assume the application is fixed in concrete

We have a component that [[does something that probably isn't a very good idea]]. Does the deployment tool support [[Rube Goldberg feature that works for this very strange use case but wouldn't be very useful for everyone else]]?

Instead of trying to "deploy around" the problem, sometimes a better solution is to reconsider how the application works. If you're faced with a problem and the solution feels overly complicated, don't rule out the possibility of redefining the problem by changing the application?

This isn't always possible, of course, but sometimes it's more possible than you might at first think. Sometimes it just requires talking to the right people.

Aim for just one deployment procedure

Sometimes it's tempting to come up with many different deployment procedures based on the kinds of changes being deployed. For major deployments, do blah. Just changing some content? Robocopy these files. Didn't change the database? Don't do XYZ.

Instead, try to create a single deployment process that can run from start to finish no matter what kinds of changes you've made. If a deployment step doesn't need to happen, the process should be smart enough to not run it, or run it in an idempotent way - that shouldn't be a human's responsibility. It means you've only got one procedure to test, and by running through it consistently it will make the bigger, scarier deployments more reliable.

Automating deployments for large applications can be a hard and time-consuming process. But it's a process that can be made much simpler if applications are designed to be deployed in the first place.

Wizards, dialogs and context menus, or build servers and scripts?

How does Octopus handle rollbacks?