If you adopted some of the technical, cultural, and process capabilities of DevOps, you may wonder whether your hard work is paying off. Adopting practices, learning tools, and building deployment pipelines takes time and effort. Now you need a way to see if this is helping you achieve your goals. You can do this with metrics.

To measure your work system, it needs to have the properties of observability. In Observability Engineering Charity Majors, Liz Fong-Jones, and George Miranda define observability as:

…a measure of how well internal states of a system can be inferred from knowledge of its external outputs.

If a system is observable, you can gauge its health from its outputs. You’re already putting this into practice if you’re monitoring your software. You need to do the same for your process so you can observe and generate ideas for improvements.

The most widely-recognized starting point for measuring DevOps are the DORA metrics, often called the four keys. Then, when you’re ready to take your measurement journey to the next level, you can use the SPACE Framework to design your own measures.

Designing good metrics can be difficult. Your DevOps system consists of individuals in teams creating value, which Jim Benson calls The Collaboration Equation. If you focus too much on a single metric, people might seek to achieve it to the detriment of other important measures. That’s where DORA metrics and the SPACE framework use combination metrics to balance a system’s response to measurement.

Let’s look at the DORA metrics before expanding into the SPACE framework.

What are DORA metrics?

The DevOps Research and Assessment (DORA) metrics are performance metrics linked to DevOps success. The metrics result from extensive DevOps community surveys and identifying the factors that matter most. The DORA team conducts yearly investigations into the state of DevOps and shares their findings in a report. The DORA metrics are:

The DORA metrics should balance each other out. For example, lead time balances against change failure rate. Without change failure rate as a metric, you could achieve a very low lead time for change without accounting for quality. Research finds these metrics predict both software delivery performance and organizational success.

When delivering software, we store source code in a repository like Git. Developers make changes to the code by committing code to the repository. The commit doesn’t immediately change the live product. Before reaching the production environment, changes must progress through a series of stages.

Lead time for changes is the amount of time it takes a commit to get into production.

For the primary application or service you work on, what is your lead time for changes (for example, how long does it take to go from code committed to code successfully running in production)?

All software is subject to failure, whether as a result of a change or due to external factors. Rather than attempting to reduce the number of failures, DORA recommends teams focus on the speed of recovery.

The faster an organization can recover from failures in production, the better the experience for end users.

For the primary application or service you work on, how long does it generally take to restore service when a service incident or a defect that impacts users occurs (for example, unplanned outage or service impairment)?

When measuring recovery times, you can reduce blind spots by looking at a distribution or scatter plot of resolution times. A rare incident with a long time to recover would be hard to spot against a mean or median average if there were many short incidents in the dataset.

A typical DevOps deployment pipeline splits code releases across different environments (Test, Development, and Production). Before progressing to Production, the Test and Development environments verify experiments and new versions. Once a release is ready to go live, it moves into the Production environment and the hands of end users.

Deployment frequency is how often an organization successfully releases to Production.

For the primary application or service you work on, how often does your organization deploy code to Production or release it to end users?

A lower percentage indicates a higher score, and anything 15% or lower is a good result.

For the primary application or service you work on, what percentage of changes to Production or released to users result in degraded service (lead to service impairment or service outage, for example) and need a fix (a hotfix, rollback, fix forward, patch, for example)?

The DORA 2022 report suggests Site Reliability Engineering (SRE) adoption plays an important role in organizational success. SRE is an approach to operations that uses observed learning, cross-functional collaboration, automation and measurement. SRE is a way of adding reliability across a system.

Adopting SRE across a company is a journey, and the report indicates a ‘J-curve’ pattern to seeing results. In the initial adoption phase, there will be few results while teams learn new processes and implement systems. At a certain threshold, SRE yields tangible improvements to reliability as the curve trends upwards. See The J-curve below. 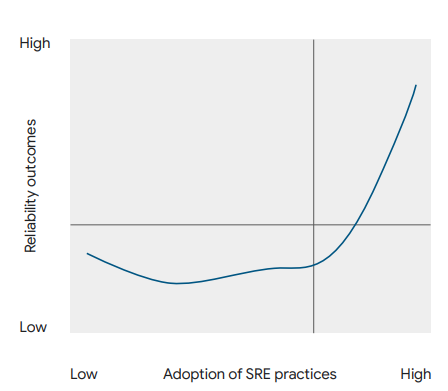 Based on the surveys, the DORA report classifies each company on a scale of how well they meet each metric. The performance in each metric classifies companies into one of three categories: Low, Medium, and High. Based on the category, you can identify how well your company performs relative to other DevOps community performers.

Before 2022, there was an extra category named ‘Elite.’ This was, however, removed for the 2022 State of DevOps report as it found only three clusters in the data.

11% of respondents were in the high category, 69% in the medium category, and 19% in the low category. There is a large gap between high and low performers, with high performers having 417x more deployments than low performers.

Respondents who make higher-than-average use of all the above capabilities have 3.8x higher organizational performance

Having above-average use of these capabilities would contribute to higher DORA metrics scores.

To measure developer productivity, teams and leaders (and even individuals) should capture several metrics across multiple dimensions of the framework - at least three are recommended

Use any metric taken at the individual level as an aggregate for analysis of a larger context. That’s because the SPACE framework should not be a developer report card. Rather than focus on the time taken for a developer to review a pull request, the information on review times should be an answer to a broader question.

How can you improve the distribution of code review age to ensure all code reviews are completed sooner, as this improves the flow of work?

Framing the question in the context of the whole team removes the need to assign arbitrary KPIs to developers that have no meaning in isolation.

The table below is an example SPACE framework matrix, with metrics for each category. The metrics you choose can be different, and it’s important to evaluate the broader questions you want to answer about your system.

Metrics are useful in system observability by allowing you to assess the internal health of your system through external indicators. The DORA metrics are a set of performance metrics closely linked to DevOps success. The metrics are:

You can use these metrics together to see how your company performs relative to other successful DevOps companies.

DORA metrics give you a picture of overall DevOps system health. The SPACE framework allows you to look at productivity from an individual and team level and tackle productivity from multiple angles. The areas are:

DORA metrics and the SPACE framework help create ideas as part of your continuous improvement practice and offer insight into your DevOps performance.

These resources will help you find out more about DevOps metrics:

How useful was this page? 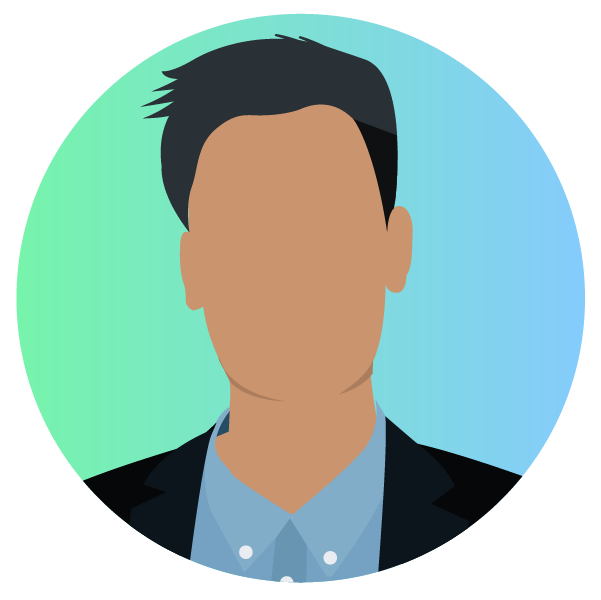 Terence Wong is a software engineer who loves problem-solving and technology.