You may already use Azure DevOps, or you might be planning your next CI/CD pipeline. Octopus Deploy brings best-in-class deployments, release management, and operations runbooks capabilities, giving your team power far beyond what's included with Azure DevOps. This page explains the difference between the two, and why the best engineering teams use them together.

Developers often ask us why they should use Octopus Deploy over Azure DevOps, especially if they already use Azure DevOps for bug tracking, builds, or source control. This page is our attempt to explain the major differences in capabilities, and why you'd want to use both together.

Obviously, we're biased — we really like Octopus Deploy! But we do want this page to be fair and accurate. If you see anything here that you disagree with, let us know and we'll correct it quickly.

The Azure DevOps platform started life as Team Foundation Server (TFS) in 2005 and has gone through a number of renames since, including Visual Studio Online and Visual Studio Team System/Services (VSTS).

When Octopus is compared to Azure DevOps, it's really about comparing Octopus Deploy to the Release Management features of Azure DevOps, as Octopus doesn't attempt to do bug tracking, source control, or builds.

In 2018, Microsoft acquired GitHub, and recently Microsoft's focus seems to be moving to GitHub Actions, with a number of key people involved in Azure DevOps moving over to GitHub. While we expect Azure DevOps to be supported for a long time, it's not clear how the roadmap will evolve or how much Microsoft will continue to invest in it.

Octopus Deploy is an independent software vendor. It was founded in 2011 and is bootstrapped, conservatively managed, and profitable. Octopus Deploy's goal is to build the most powerful and capable solution for release management, deployment, and operations automation. Learn more about our company.

While there are many differences between Octopus Deploy and the pipelines/release management aspects of Azure DevOps, the table below summarizes the key differences.

In our opinion, this can lead to bugs because it is easy to forget to apply a change to each environment. It also encourages bad practices that lead to production deployment failures. 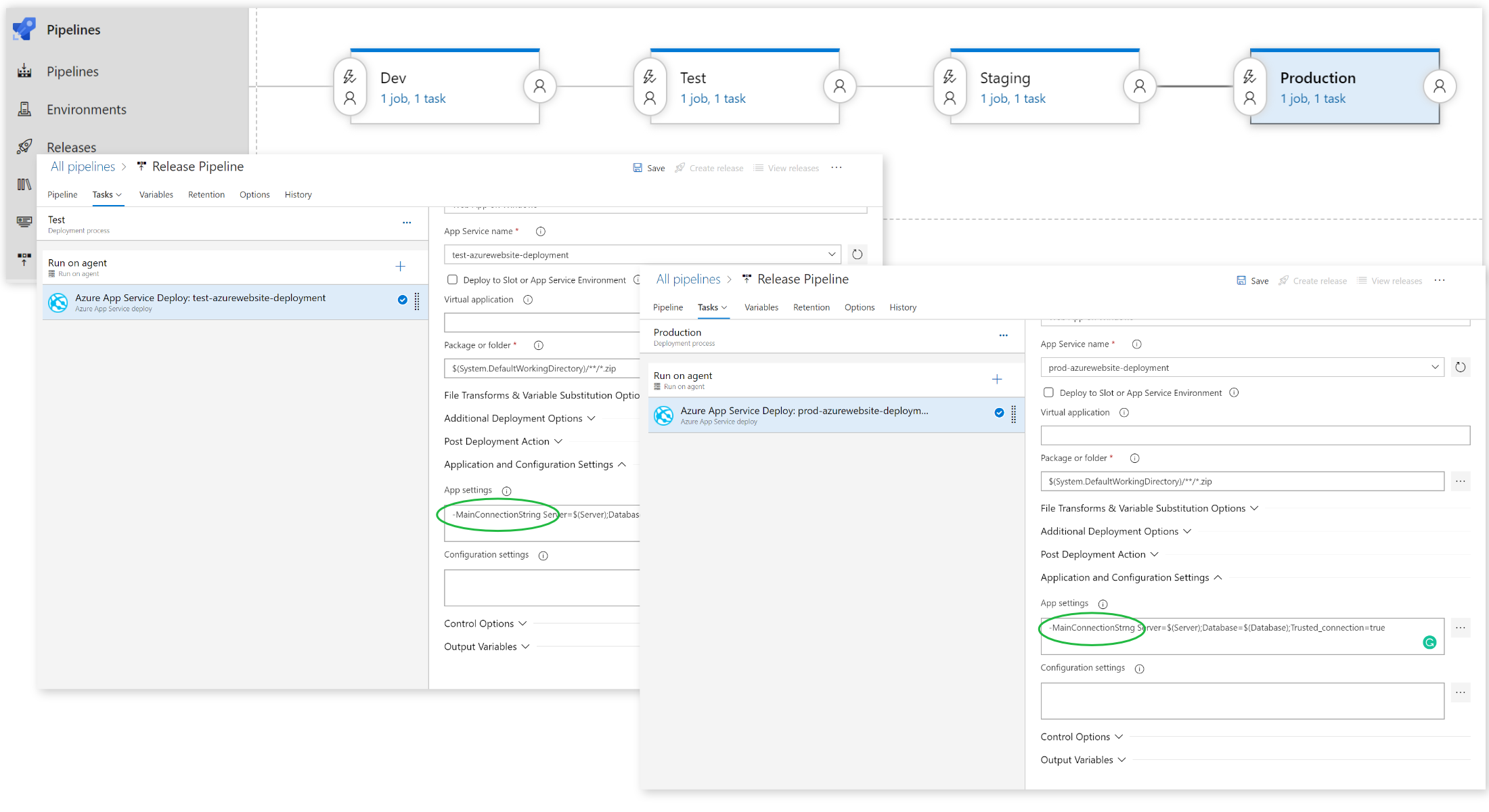 Because each stage in Azure DevOps gets its own set of steps, it's easy for teams to forget to change a setting in each stage, or to make a mistake. Here, the Test stage is set up correctly, so deployments each day to the test environment succeed. But the Production stage has a typo - this will only be picked up at production deployment time.

In Octopus, there's one deployment process per project, and while there are some escape hatches, Octopus pushes you to make your Dev, Test, and Production deployments as similar as possible . This means that when you're finally ready to deploy to production, the same deployment process has already run many times before. 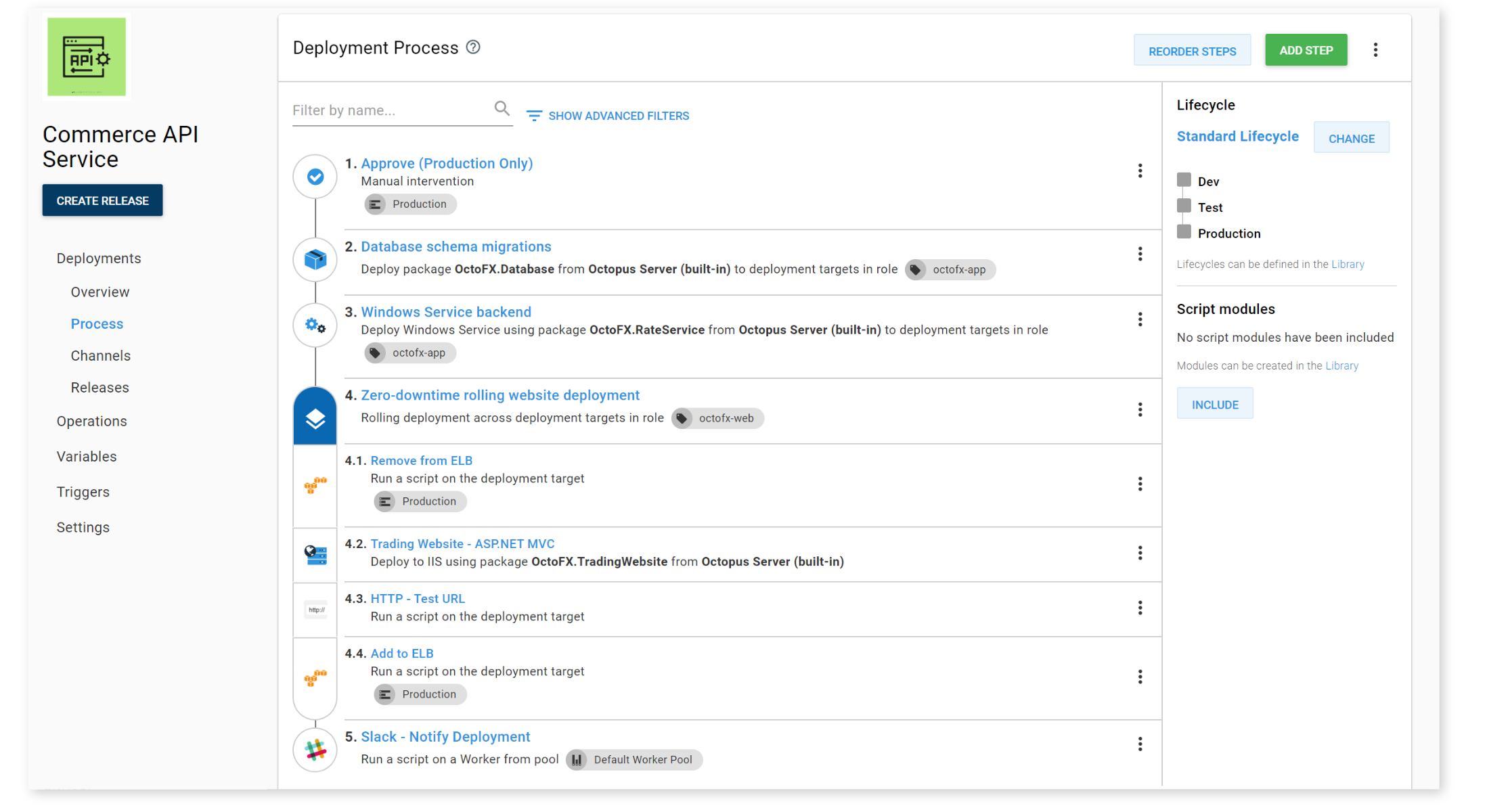 In Octopus you have a single deployment process that runs for all environments for the project. You can make some steps specific to an environment (e.g., approvals being Production-only), but generally, Octopus is opinionated and pushes you to keep them as similar as you can.

Runbooks: automation for Ops too

Whether you use Octopus or Azure DevOps for releases, you'll likely need to tell your release management solution a whole lot of things:

If you're going to set all of this up for deployments, you should be able to use it for other automation tasks too.

In addition to automating deployments, Octopus also provides first-class support for Runbooks, which can be used to automate these routine and emergency operations tasks. Runbooks in Octopus belong to the same project as your deployment process, and they have access to the same environments, variables, certificates, and everything else. It's the closest thing to a complete DevOps automation platform. 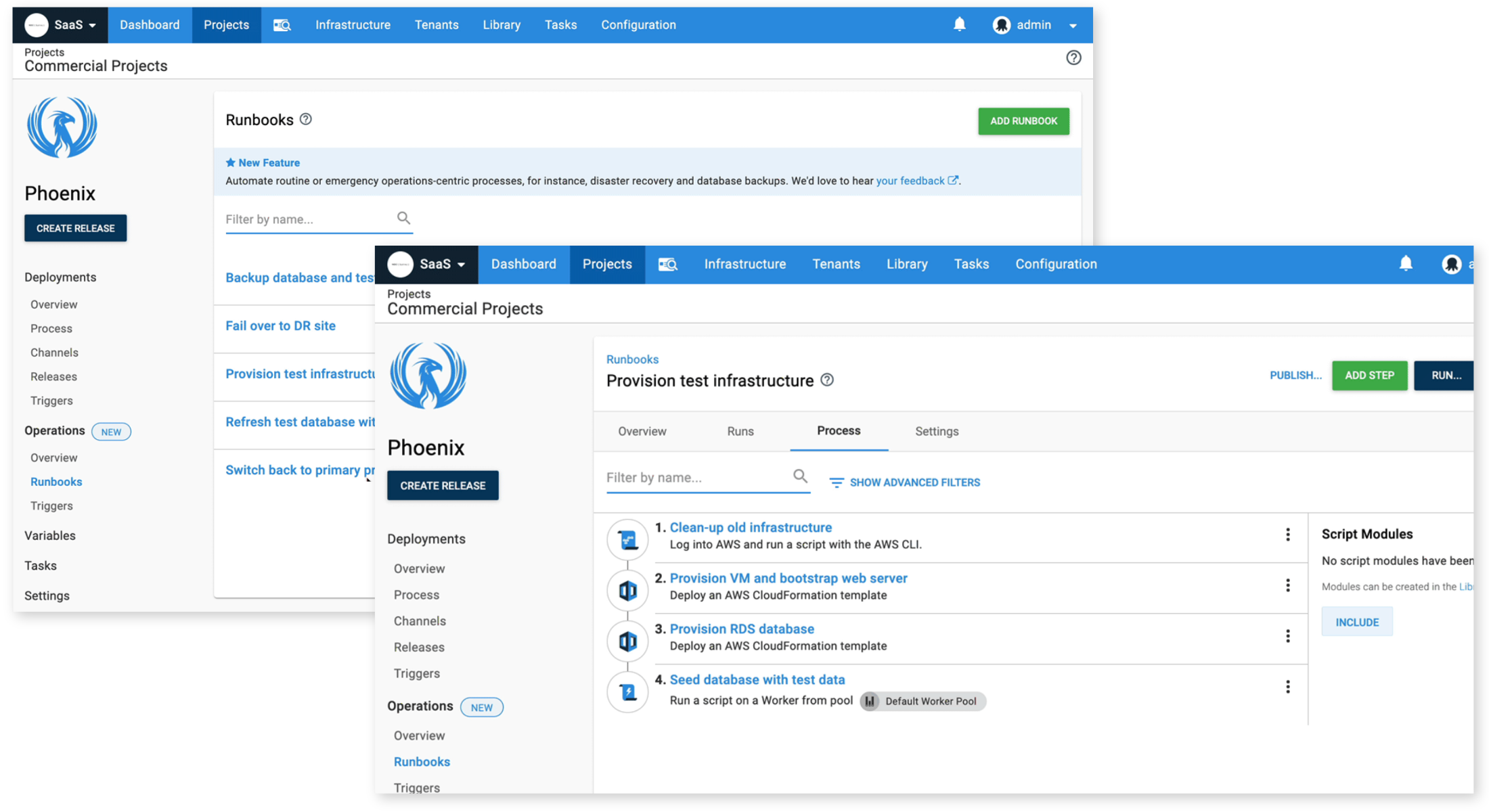 Runbooks in Octopus Deploy can be used to automate routine tasks from the same platform.

Despite the name, Azure DevOps has no ability to automate operations tasks that are not deployments. Microsoft's recommendation is to use Azure Automation, another solution. Nothing is synchronized between them, so you'll end up duplicating all of this configuration, with no source of truth. The silo between Dev and Ops will remain, each using their own automation solution.

Octopus and Azure DevOps Releases use a UI to define the individual steps for deployments. Most developers on a team aren't experts in build/deployment automation, and co-ordinating complex deployments across many machines doesn't lend itself to a scripting language. The UI makes it easy for people - especially those who didn't author the original deployment - to figure out what is going on.

Starting in 2018, Azure DevOps Pipelines added support for writing build/CI pipelines in YAML. In fact, for builds, the UI-driven way of automating builds has been renamed "Classic Pipelines", a signal that YAML is the future.

Whether you like the choice of YAML or not, you'll probably agree Configuration as Code is a good idea. So you might be surprised to learn that Releases in Azure DevOps still use the "Classic" UI-driven solution - there's no YAML support for releases. Microsoft originally indicated it would happen, but so far it hasn't, and it's not on their public roadmap.

It seems as though Releases (and Release Management) in Azure DevOps has been ignored for YAML, in favor of "multi-stage Pipelines" which use YAML. However, multi-stage pipelines assume that the entire pipeline will execute (unless there's a failure) all the way, for every commit. This makes sense if you want every commit to go to production as soon as it's built, but not if you have any kind of approval process (e.g., a QA team), or designated times when deployment is safe.

The summary is, in Azure DevOps, you can use YAML, or you can use release management, but not both. And there's nothing on the roadmap suggesting Release Management will get YAML support.

With Config as Code in Octopus, we provide the full power of Git with the usability of Octopus. This means you can see your deployment process in your Git repo next to your application code and evolve them together. When Config as Code is enabled for a project, you can continue to use the Octopus UI as you always have, or you can edit the text files in your favorite editor.

Our Config as Code solution is different. Importantly, the Octopus UI still works, so you don’t need to learn a whole new language to edit your process. We want you to have a great experience using the Octopus Web Portal so you can configure your Git repository, select your branch, create new branches, commit changes, and more, all from the Octopus UI.

We believe branches are Git's superpower, and we wanted to expose that power. You can switch and create branches, in the Octopus UI, allowing you to make changes to your deployment process on a branch. This effectively allows for a draft mode, as you can then create a release from your branch and test your changes. When combined with features from your Git provider, like pull requests, protected branches, and code-owners, this enables a whole new set of workflows.

Our configuration file format is Octopus Configuration Language (OCL), based on HashiCorp's HCL. We wanted our configuration files to be human readable and to support complex documents like deployment and runbook processes. We like HCL and feel it's the right tool for the job, but we've written our own parser/serializer. This means we're not obligated to follow any direction HashiCorp takes HCL, and there's nothing preventing us from making changes.

If you prefer full control, you can edit the underlying configuration files but this isn't required. The rich two-way sync means you can mix and match your use of the Octopus UI and direct editing. We also built a Visual Studio Code extension so you can edit OCL files with syntax highlighting, code snippets and fast navigation.

If you deploy a copy of your software for every customer that signs up, you might find yourself with dozens, hundreds, or even thousands of deployment pipelines.

Octopus is the only release management & deployment automation solution with first-class multi-tenancy support, letting you manage deployments to a single customer or a group without duplication. With Azure DevOps, you need to duplicate your release definitions for every customer. 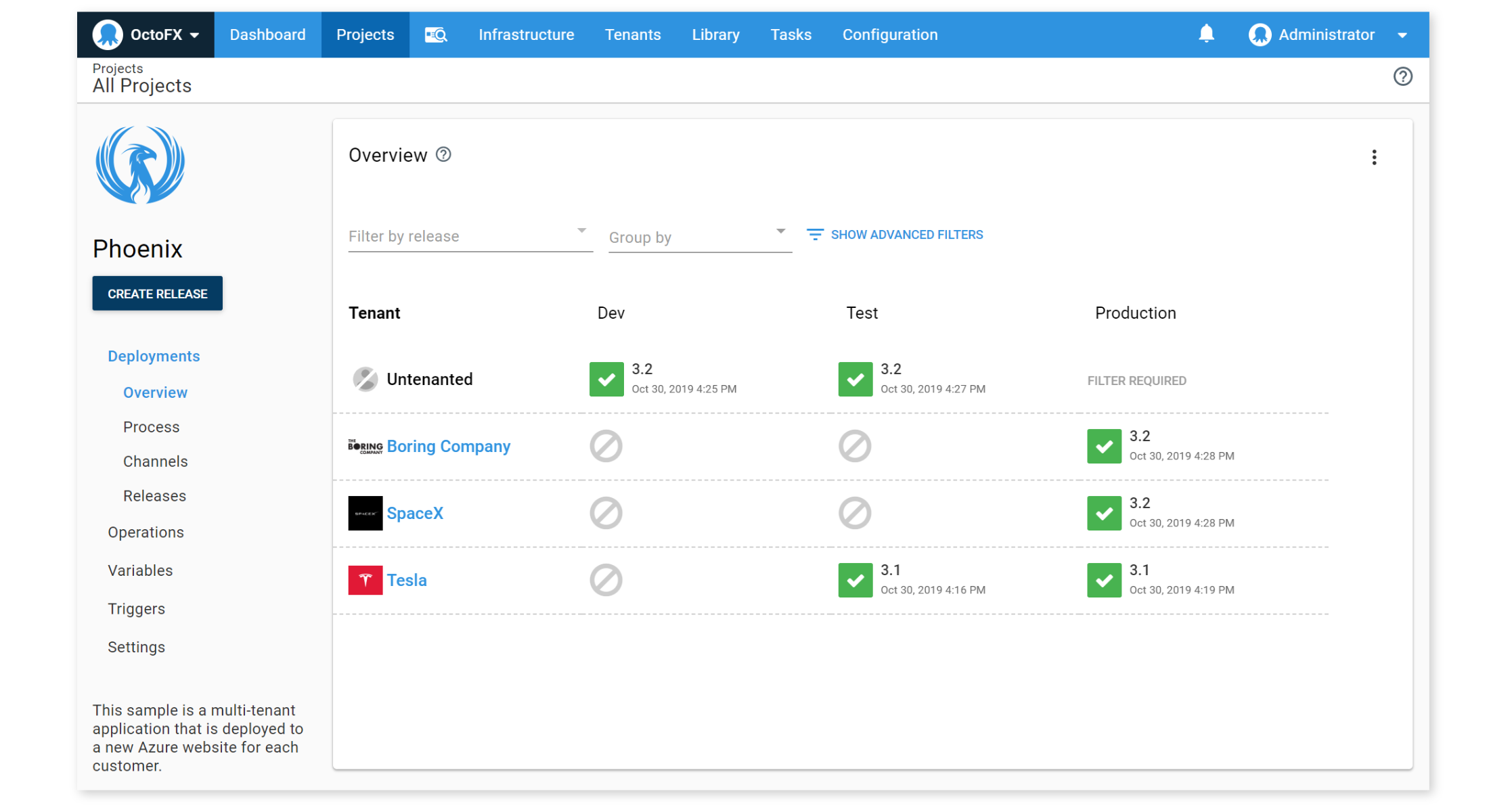 “Octopus Deploy is the most sophisticated release management solution. It is the broadest, and the deepest deployment tool for any kind of application on the Microsoft platform.”

Use Octopus Deploy with Azure DevOps

Octopus with Azure DevOps can be a very powerful combination. With Azure DevOps, you get source control, build/CI, and bug tracking. With Octopus, you get the most powerful release management, deployment and runbook automation capabilities. See the diagram below for an overview of how they work together:

We haven't written the tutorial for the combination you selected yet.

👍 Vote for this tutorial

Generating an end-to-end tutorial for you... 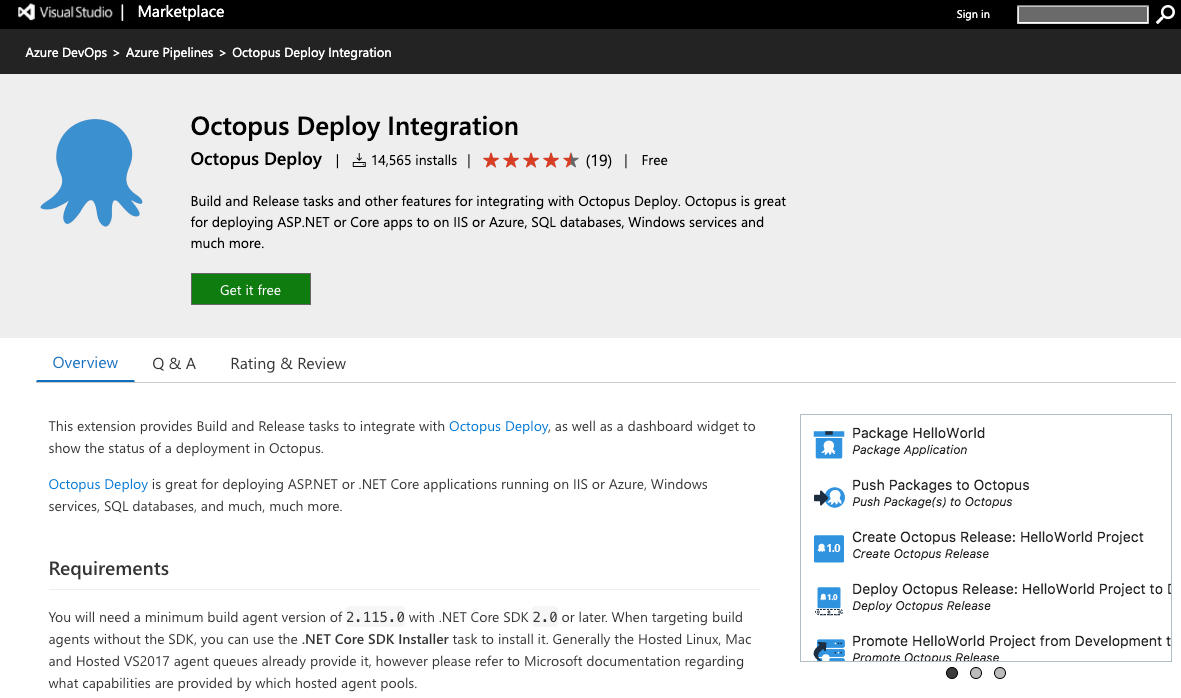 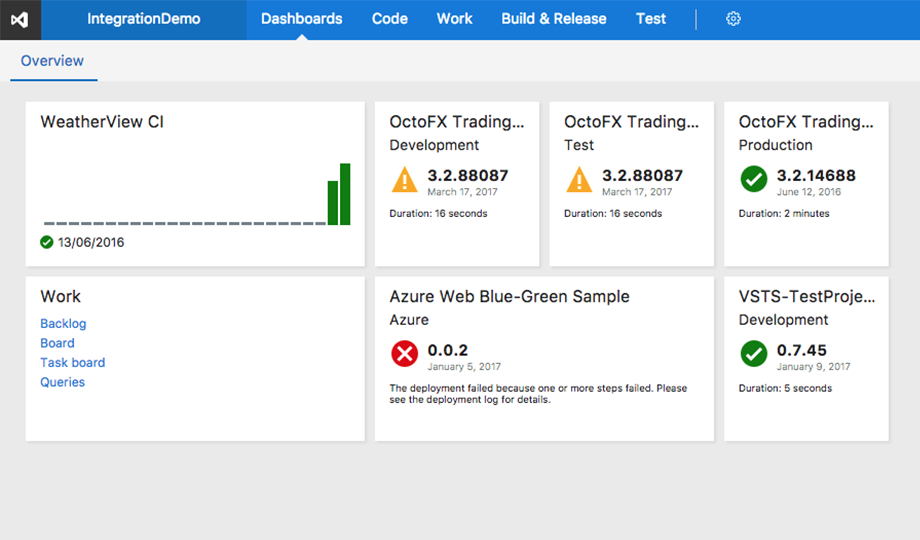 Connect your Azure DevOps dashboard to Octopus, and use our dashboard widget to display the status of your Octopus deployments all from the comfort of your project dashboard. 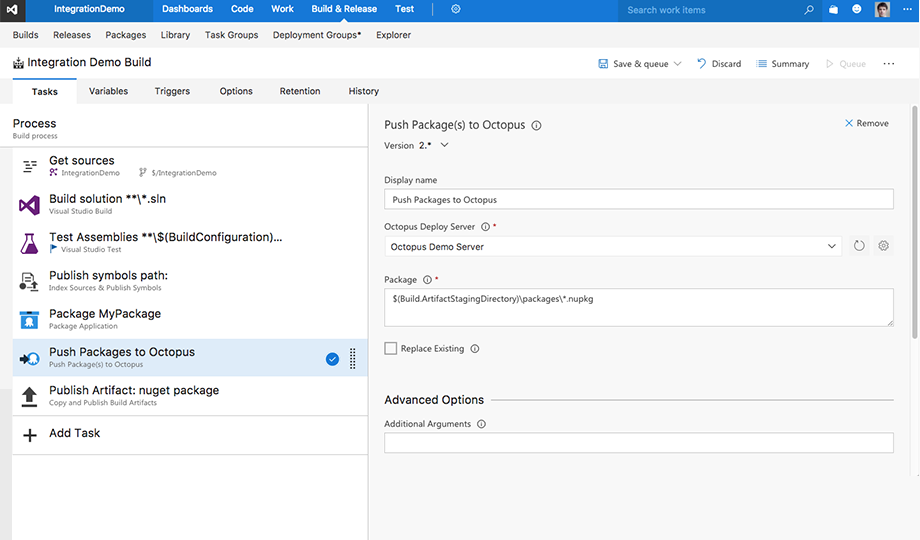 Complete your build, test, and package workflow by using the Push Packages to Octopus task. There is the option to select which Octopus instance to push the package to, replace packages, and add additional arguments. 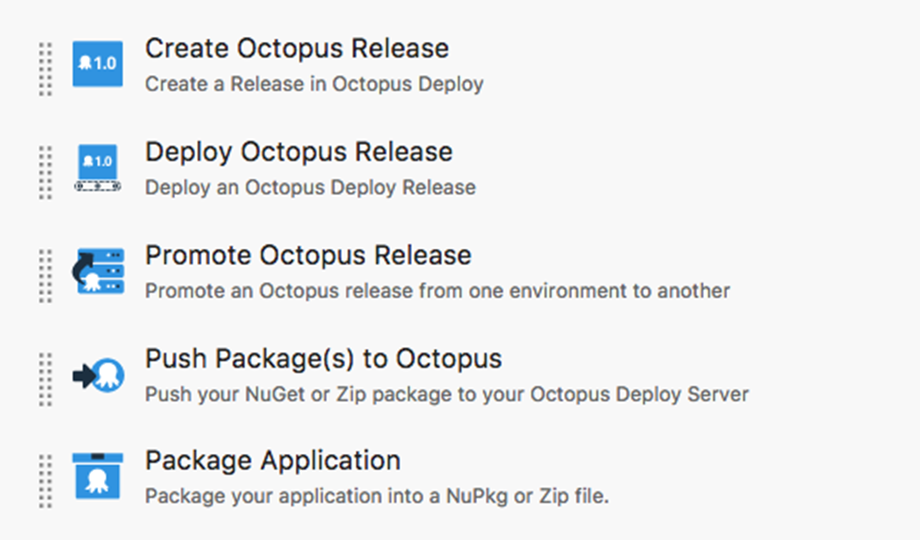 All the tasks you need to perform a deployment in Octopus are available in Azure DevOps. Each task provides a number of options, including which instance to deploy to and options for channels and tenanted deployments. 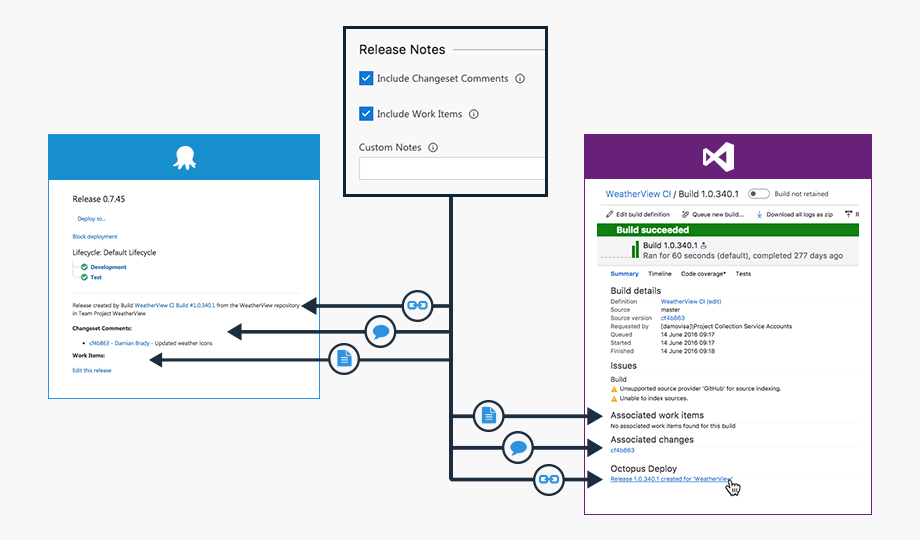 The Octopus tasks can be called either directly from Team Build or from Pipelines within Azure DevOps. This makes it possible to use Azure Pipelines for high-level release approvals, but gets all the benefits of Octopus (multi-tenant deployments, on-premises deployments, etc.) at deployment time.