Lifecycles give you control over the way releases of your software are promoted between your environments. You can also use them to automate deployments and set retention policies.

Lifecycles are managed from the library page by navigating to Library ➜ Lifecyles:

Octopus automatically creates a default lifecycle for you that contains a phase for each environment that you've created in Octopus Deploy. When you deploy your software it passes through the phases of the lifecycle in order.

Lifecycles don't apply to Runbooks. Learn more about the differences between Runbooks and Deployments.

A phase represents a stage in your deployment lifecycle. You deploy to phases in order, and you can choose how releases move between phases. For example, you can configure a lifecycle so that there must be a successful deployment to the Development phase before you can proceed to the Testing phase. You can also have a completely optional phase. This allows you to release to an environment in the next phase without being required to deploy to any in the optional phase.

Phases can also include multiple environments. This can be useful where you have more than one Testing environment.

It's possible to add one or multiple environments to a phase. When a phase has environments added to it, this defines which ones can be deployed to during this phase of the lifecycle.

Any future environments you define will also be deployed to as part of this phase of the Lifecycle.

Retention policies define how long releases are kept for, and how long extracted packages and files are kept on Tentacles. The default for both is to keep all. Learn more about Retention Policies.

If you have a project setup with Automatic Release Creation and set your first phase and environment to automatically deploy, pushing a package to the internal library will trigger both a release, and a deployment to that environment. 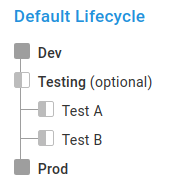 If you want to be able to deploy to any environment at any time, then simply create a single phase which has Phase Progression set to All must complete and includes all your environments.

After you have defined your lifecycles, they become available to your projects. Projects can be deployed to any environment in their lifecycle.

Octopus creates a default lifecycle for you. To view it, navigate to Library ➜ Lifecycles, and it will be in the list named Default Lifecycle:

The default lifecycle handles most cases for small or straightforward configurations.

When you create a new environment, it's automatically included in the default lifecycle. This also means that if you reorder the environments, the order of the phases will also change to match. These conventions can be helpful, but can sometimes lead to performance problems.

We recommend updating the default lifecycle to define the phases you need. This makes configuring and maintaining your Octopus Server easier.

In the next section, we look at configuring the default lifecycle to add your own phases.

Adding a phase to the default lifecyle

You can define your own phases for the default lifecycle. This helps to prevent having too many phases being added automatically. To add a new phase, in the default lifecycle, Click ADD PHASE. Here, we are creating a phase named Development and adding the Dev environment to the phase:

This phase has the default option to manually deploy to the environment set. The Required to progress and Retention policy are also set to the default values.

Phase names usually match the environment it contains. While this is a good practice, it's not a rule.

You can repeat this process to create extra phases. In this example, we are creating a phase for Testing, Staging, and Production. 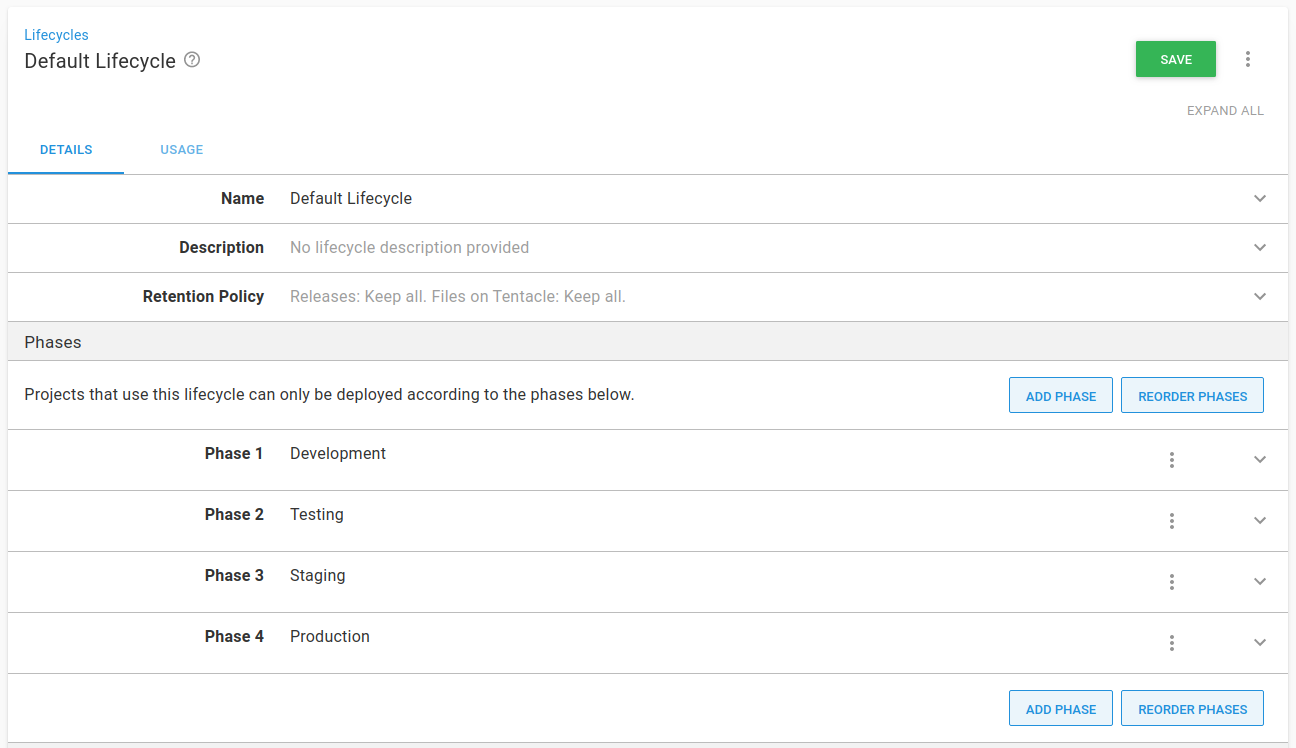 This allows you to explicitly configure the default lifecycle for deploying your software.

In this section, we cover some lifecycle examples and their included phases.

A hotfix lifecycle is useful when you have a critical bug-fix that needs to be deployed quickly. In this scenario, lower environments such as Development and Testing are skipped.

It's recommended to follow good deployment practices and validate any changes before pushing to production. To match this, a hotfix lifecycle usually has just two phases, Staging and Production. Software with the bug fix is validated in Staging, and then promoted to Production. Your lifecycle may be different to reflect how you decide to handle hotfixes. 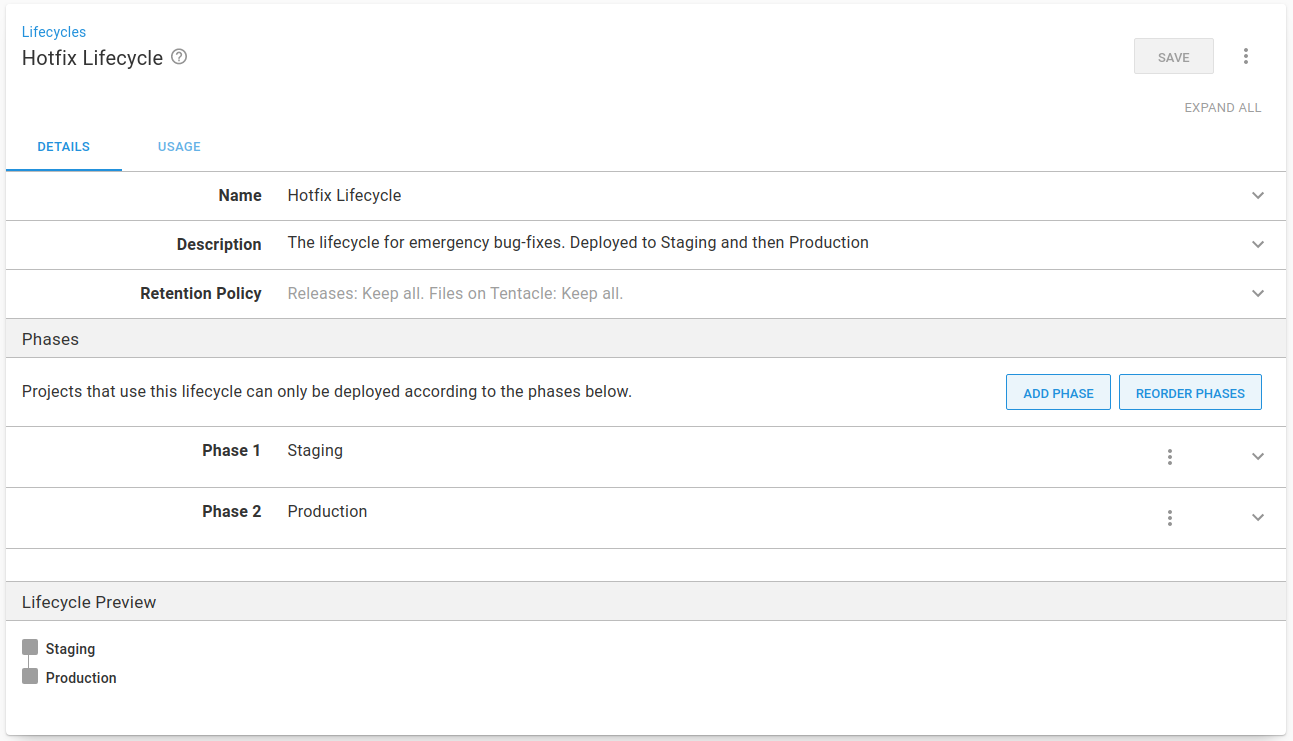 Octopus 2019.10 introduced Runbooks as an alternative to having a maintenance lifecycle. They allow you to automate routine maintenance and emergency operations tasks. 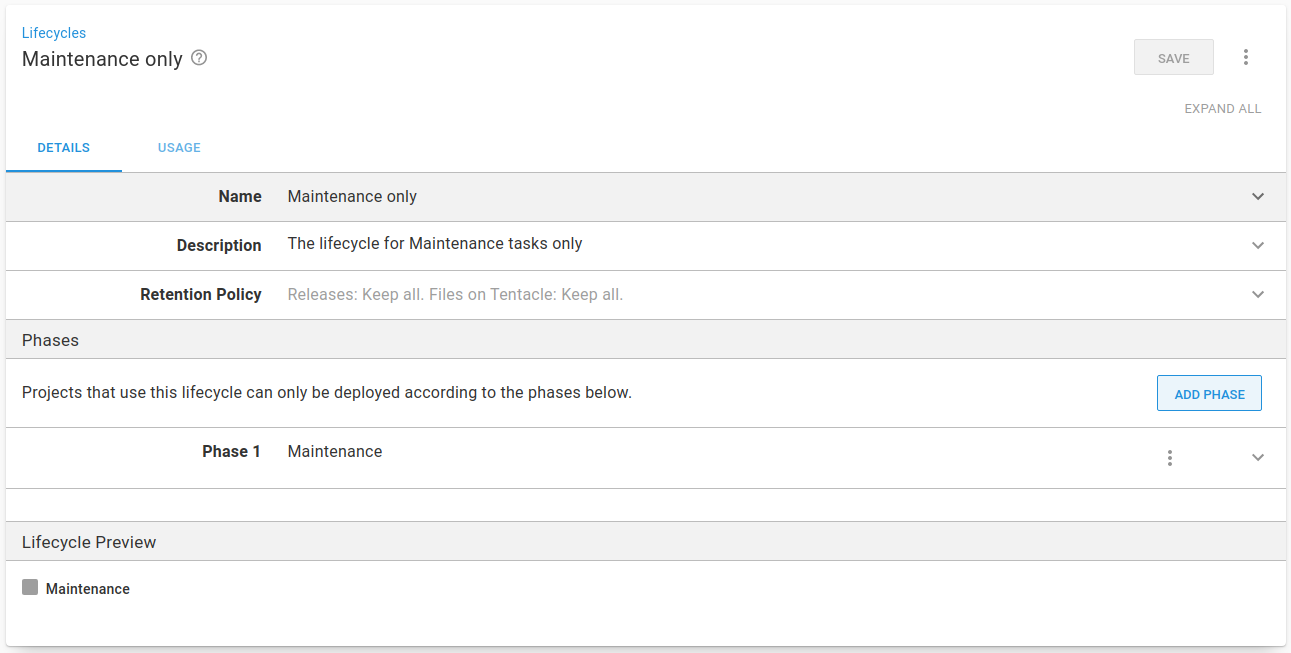 When configuring your lifecycles, here are some tips to consider: