This guide will walk through rolling back a Java application deployed to a Tomcat web server. We will be using the PetClinic Spring Boot example. The PetClinic application consists of two components:

Rolling back the database is out of scope for this guide. This article describes reasons and scenarios in which rolling back a database could result in data loss or incorrect data. This guide assumes that there are no database changes or the changes are backward compatible.

In Tomcat v7, Apache included the ability to do parallel deployments which allows you to deploy multiple versions of the same application to a Tomcat server. If a version number is provided during deployment, Tomcat will combine it with the context path to rename the .war to <contextpath>##<version>.war. Once the new version is in a running state, Tomcat will redirect new sessions to the new version of the application. Existing sessions will continue against the old version until they expire. This functionality is ideally suited for supporting rollback scenarios when deploying to Tomcat.

The rollback strategy described in this guide will not work if the undeployOldVersions feature is enabled on Tomcat.

For this guide, we'll start with an existing deployment process for deploying the PetClinic application: 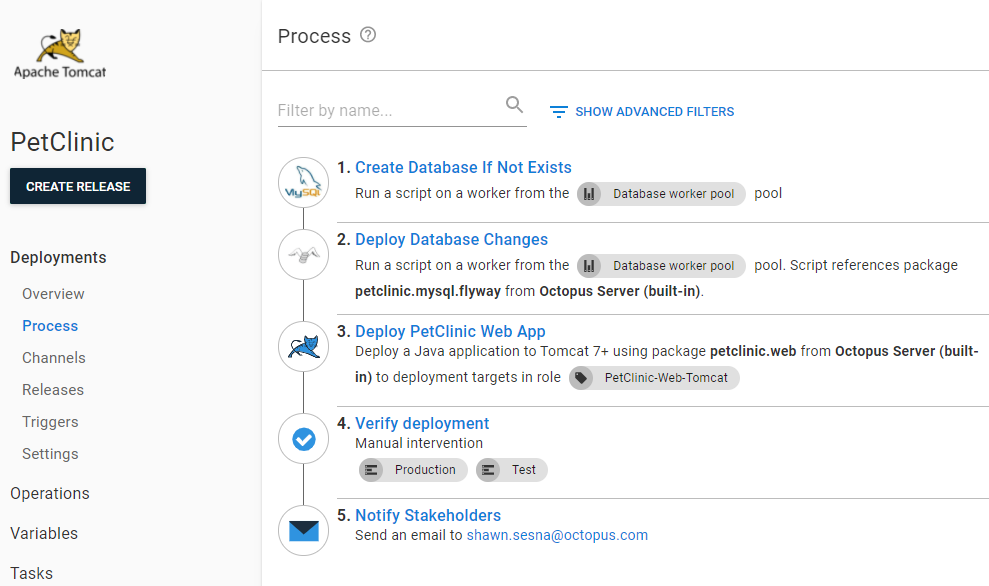 While doing a rollback can be an operational exercise, the most typical reason for a rollback is something is wrong with the release, and you need to back out the changes. A bad release should also be prevented from moving forward.

The updated deployment process for a simple rollback would look like this: 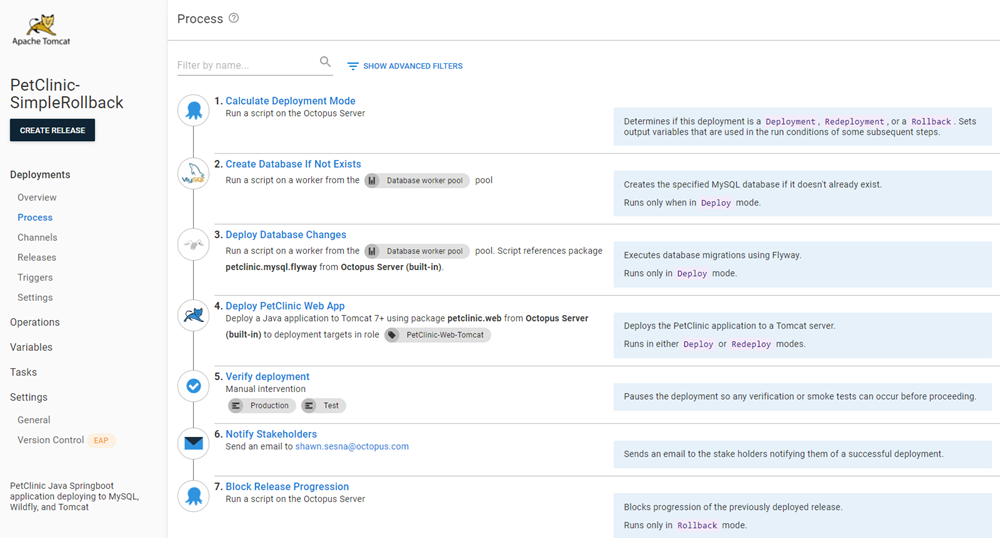 The two database steps, Create Database If Not Exists and Deploy Database Changes should be skipped for a rollback scenario. Rolling back database changes could result in data loss or interrupt testing operations. To skip these steps, we'll use one of the Variable Run Condition output variables from Calculate Depoloyment Mode step:

When looking at the deployment process from the Process tab, there isn't a quick way to determine under which conditions a step will be executed. Using the Notes field for a step is an easy way to provide users information at a glance.

In the simple rollback scenario, the .war file is redeployed, extracted, variable replacement is executed, the .war is repackaged before finally being sent to the Tomcat server webapps location. In cases where the .war is very large, the extraction and repackaging of the .war could take quite some time, making the rollback process lengthy. This is where the parallel deployments feature of Tomcat can benefit us as all the processes have already occurred during the initial deployment of that release. 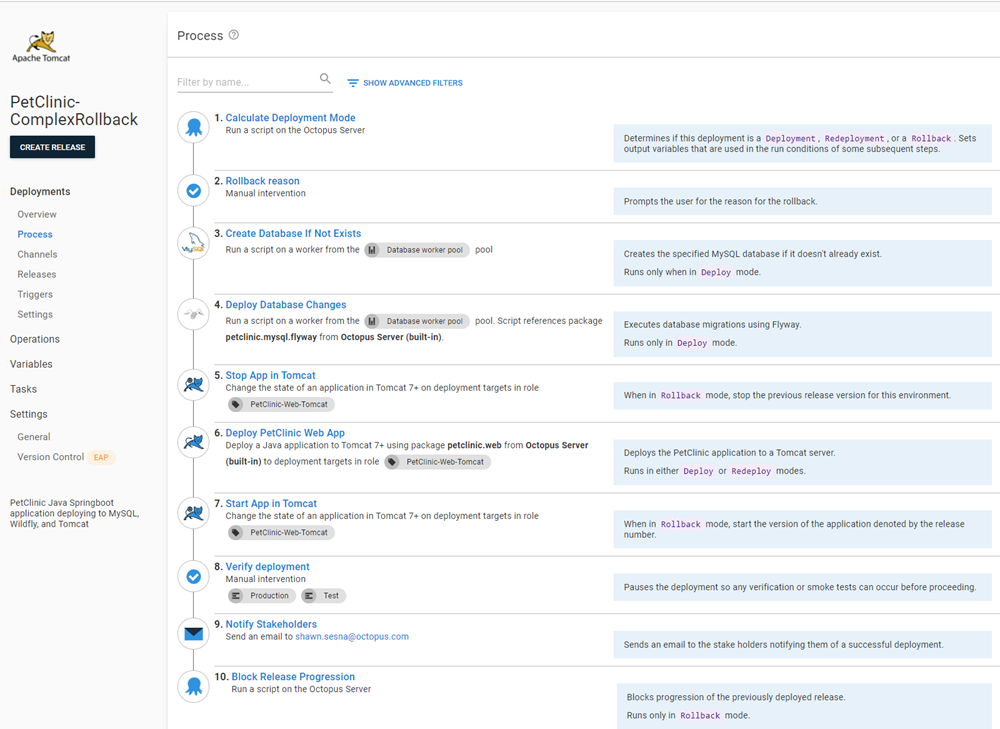 Next, we'll go through the newly added and altered steps:

The Rollback Reason is a Manual Intervention step that prompts the user for the reason they are rolling back. The text entered is stored in an output variable which will be used in the Block Release Progression step further down the process.

Before we deploy a new version of our application, we first must stop the existing one. The Advanced Options section of the Start/Stop App in Tomcat step is where we specify which version of the application we're going to stop. For this guide, the version is identified as the previous release number, which is represented by the following variable.

We also need to choose the option to Stop the application.

To configure our deployment to work with the parallel deployment feature, we need to set the deployment version of our application. This is done in the Advanced Options section of the **Deploy to Tomcat Via Manager*8 step. In the following screenshot, you will see the Octopus variable of #{Octopus.Release.Number} being used for the version number.

The radio button at the bottom gives you the option to have this deployment be in a Running state or a Stopped state; the default is Running.

For this guide, we only want the Deploy step to occur on a Deployment or a Redeployment. The Calculate Deployment Mode step provides us with an output variable called RunOnDeployOrRedeploy that contains the correct statement for a variable run condition for this step. Add the following as the value for the Variable Run Condition on this step.

When executing the rollback, we'll need to start the previous version.

This step is only required during a rollback scenario, so you'll need to add the following to the Variable Run Condition.

The Rollback Reason step captures the reason for the rollback. We can pass the text entered in this step to the Reason field of this step by using the following output variable.

The retention policy of Octopus Deploy will clean up any old versions of the applications in folders controlled by Octopus. However, the <contextpath>##<version>.war files are not controlled by Octopus and will not be cleaned up with a retention policy. To assist in Tomcat maintenance, the Octopus team developed the Undeploy Tomcat Application via Manager step template. This template will remove the application using the specified context path and optional version number.

It is our recommendation that you start with the simple rollback strategy, moving to the complex if you determine that the simple method doesn't suit your needs.