The Octopus Deploy add-on for Bamboo allows packages to be uploaded to an Octopus Server, as well as creating, deploying and promoting releases to your Octopus Deploy environments. The add-on does this by running the Octopus CLI.

The plugin relies on a local copy of the Octopus CLI being available to the build agent. The command line tool can be downloaded from the Octopus Deploy Download page.

Note that while the command line tool package is largely self contained, some Linux distributions require additional libraries to be installed before .NET Core applications will run. These packages are documented at the Get started with .NET Core website.

To verify that the command line tool can be run, execute it from a terminal. When run with no arguments, the Octo executable will display a list of available commands.

Follow the instructions at Installing add-ons to install the Octopus Deploy Bamboo add-on.

A typical workflow for pushing packages and deploying releases

There are a number of typical steps that are required to push a package to Octopus Deploy and deploy a release:

We'll assume that there is already a Bamboo build plan in place that successfully builds an application.

With the application built, we need to add it to an archive that complies with the Octopus Deploy versioning requirements. In this example we will stick to a simple AppName.Major.Minor.Patch SemVer format.

This steps runs the pack command on the command line tool.

If you are building .NET applications on an instance of Bamboo hosted on Windows, you may prefer to use OctoPack to build a package instead of manually packaging the application with the Octopus Deploy: Pack Packages task.

The Package ID field defines the name or ID of the package to be created. In this example we will use the ID myapplication.

The Version number fields defines the version of the package to create. This field is optional, but it is highly recommended that the version be generated from the Bamboo build number. We will set the version to 0.0.${bamboo.buildNumber}.

The Package format options allow you to build either a ZIP or a NUGET file. ZIP is the recommended format.

For a Java application built by Maven, the files will typically be found under the folder ${bamboo.build.working.directory}/target.

For a Java application built by Gradle, the files will typically be found under the folder ${bamboo.build.working.directory}/build/libs.

For a .NET application the files will typically be found under a folder like ${bamboo.build.working.directory}/myapplication/bin/Release/netcoreapp1.1.

The Package include paths field lists the files that are to be packed into the package.

For a Java web application you would typically pack the WAR file, which can be included with the path *.war.

For .NET applications you would typically be packing all application files like executables, config files and DLLs so leave this blank unless you wish to specify a specific set of files.

Selecting the Overwrite existing package option means that any existing local packages will be overwritten. It is useful to select this option because it means that packages can be repacked without error if the Bamboo build plan is rerun. 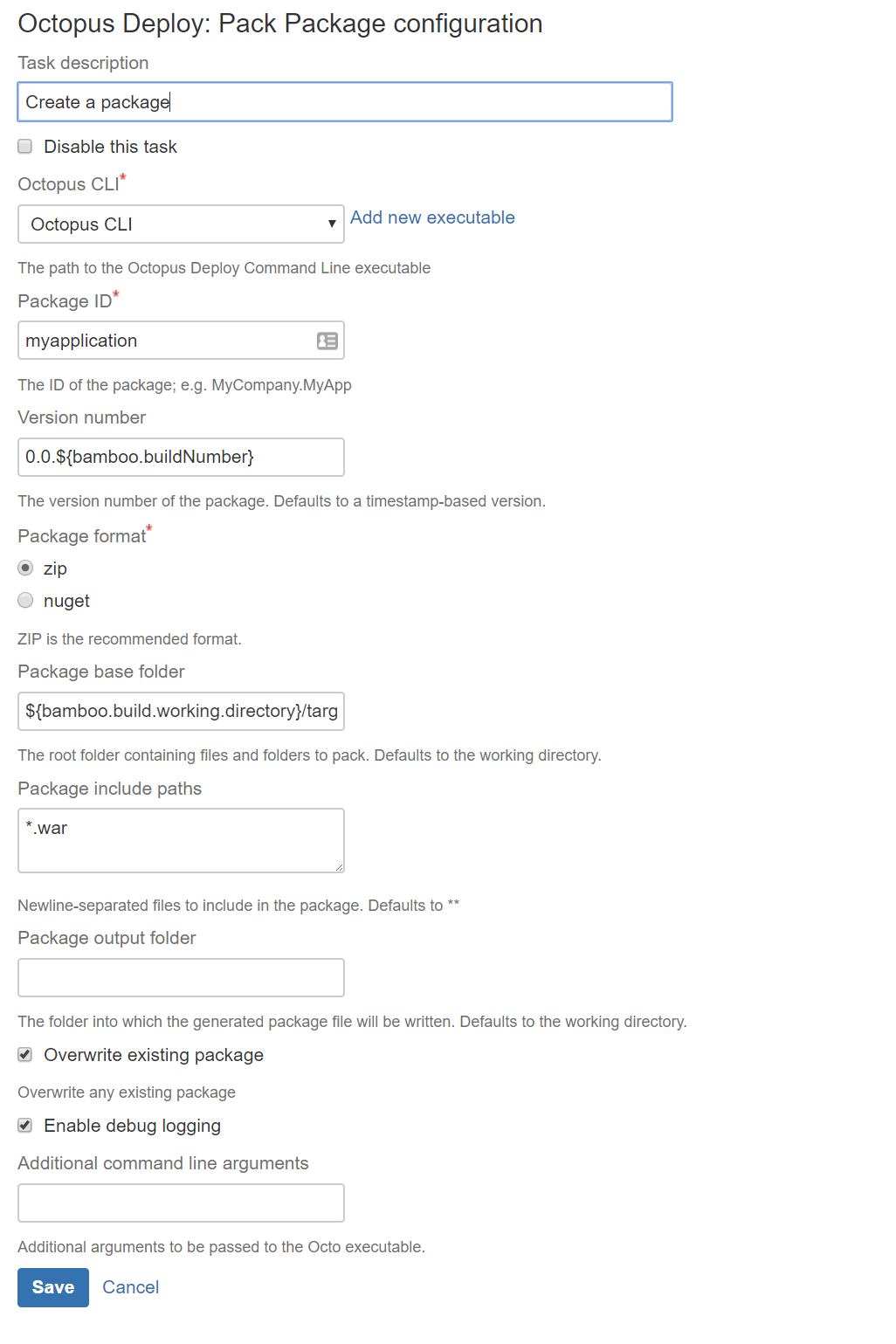 Pushing the package to Octopus Deploy is done with the Octopus Deploy: Push Packages task. In addition to the common configuration fields, this task requires the paths to the packages to be pushed and forcing package uploads.

This step runs the push command on the command line tool.

The Package paths field defines the Ant paths that are used to match packages to be pushed to Octopus Deploy. The Ant path **/*${bamboo.buildNumber}.zip matches the zip file created with during the previous step.

Note that it is recommended that the package paths defined here are specific to the build. While the Ant path **/*.zip does match the package, it also match any old packages that might have been created in previous builds and not cleaned up. This means these less specific paths can result in old packages being uploaded, which is usually not the desired result.

The Overwrite mode option can be used to control what should happen if the package already exists in the repository; the default behavior is to reject the new package being pushed (FailIfExists). You can override this behavior by using either the OverwriteExisting or IgnoreIfExists overwrite mode. 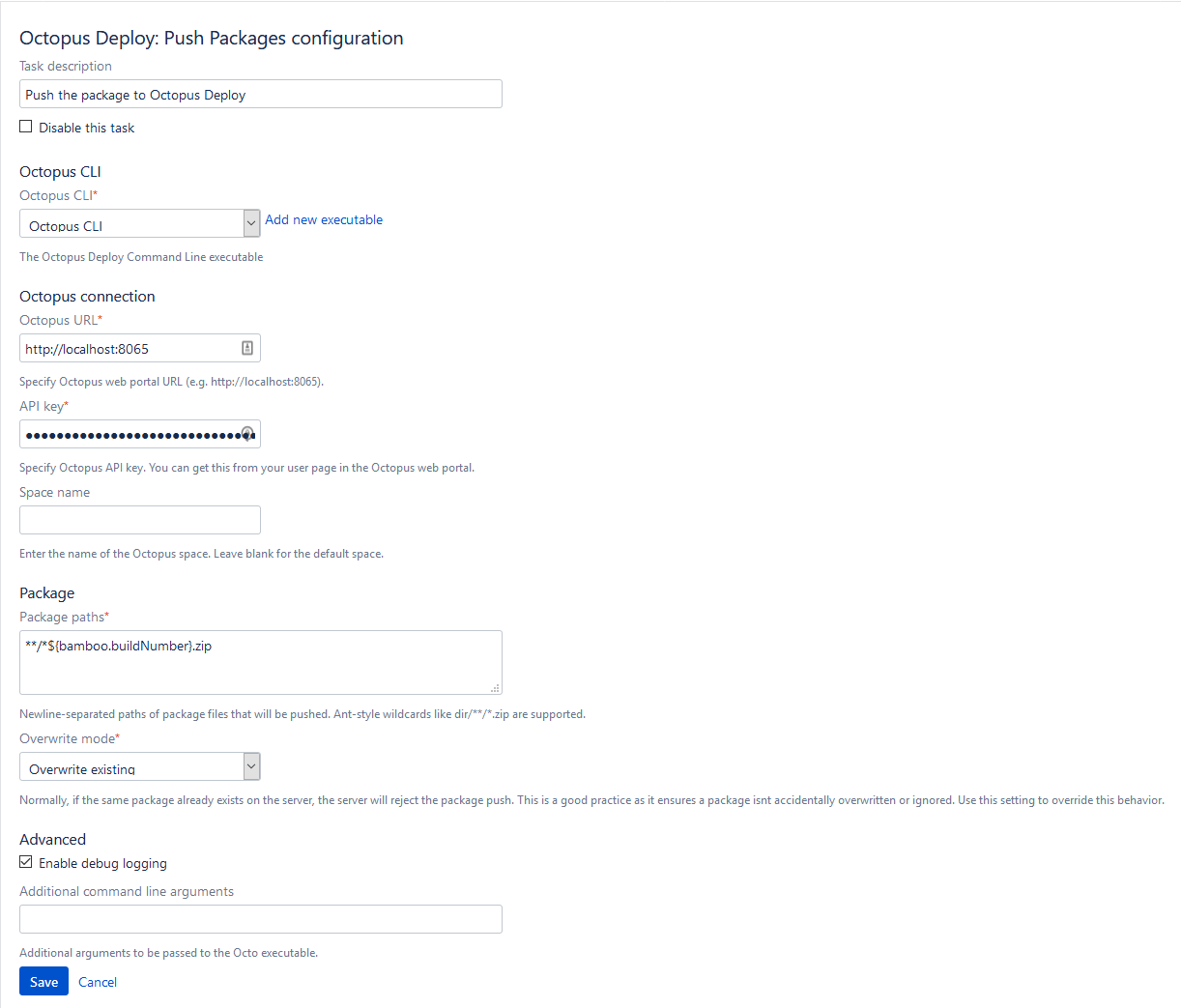 This steps runs the create-release command on the command line tool.

The Project field defines the name of the Octopus Deploy project that the release will be created for.

The Release Number field defines the version number for the release.

Although this field is optional, it is highly recommended that the release number be tied to the Bamboo build number e.g. 0.0.${bamboo.buildNumber}. The reason for this is Bamboo allows you to rebuild old builds, and if the Release number is not defined it will be assigned a default version number in Octopus Deploy. This can lead to a situation where build number 10 in Bamboo is rebuilt, and release number like 0.0.128 is created in Octopus Deploy, which is almost certainly not the desired result.

The Environment(s) field defines the Octopus Deploy environments that the new release is to be deployed to.

The Ignore existing releases option can be selected to skip the create release step if the release version already exists.

Tick this option, as it allows builds to be rebuilt. Otherwise rebuilds will attempt to recreate an existing environment and the step will fail. 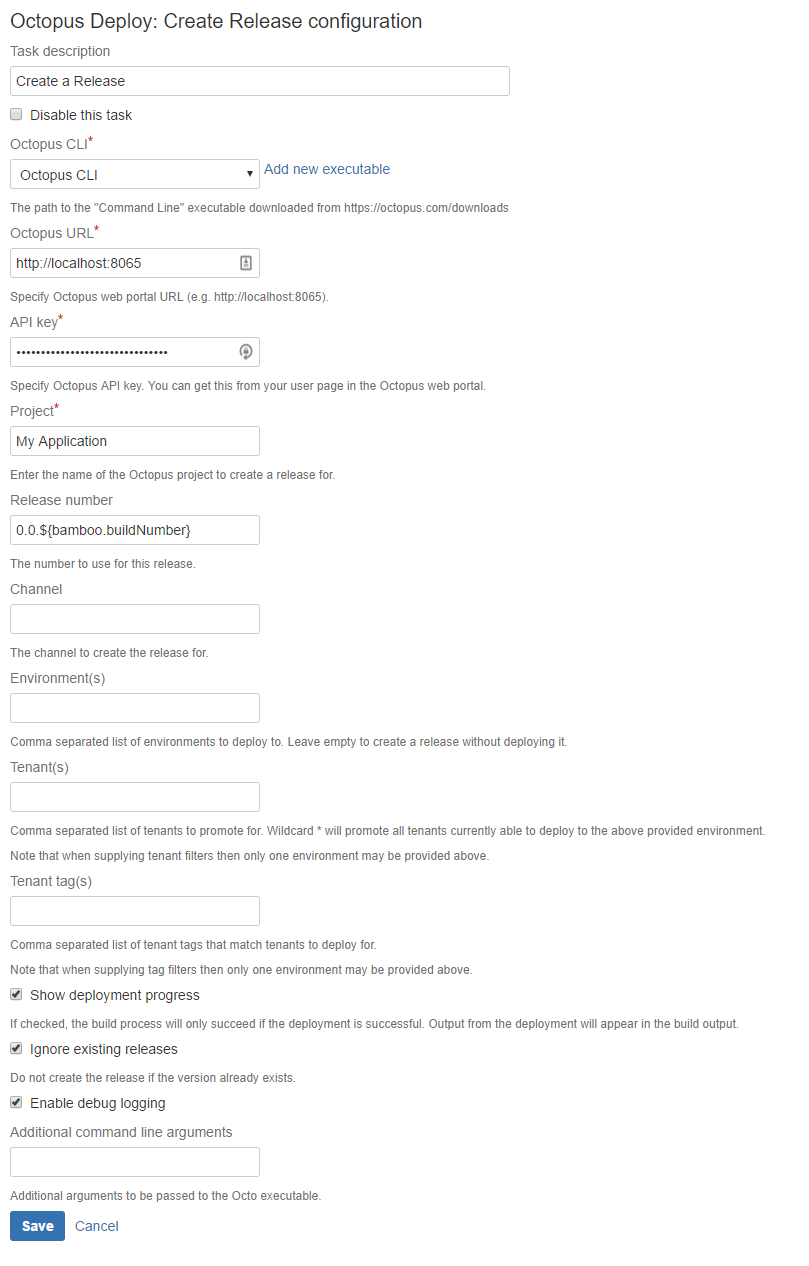 Releases can be deployed with the Octopus Deploy: Deploy Release task. In addition to the common configuration fields, this task requires the Octopus Deploy project to deploy, the environments to deploy to, and the release number to deploy.

This steps runs the deploy-release command on the command line tool.

The Project field defines the name of the Octopus Deploy project that the deployment will be done for.

The Environment(s) field defines the Octopus Deploy environments that the release is to be deployed to.

The Release Number field defines the release version number to deploy. This should match the release number from the create release step i.e. 0.0.${bamboo.buildNumber}. 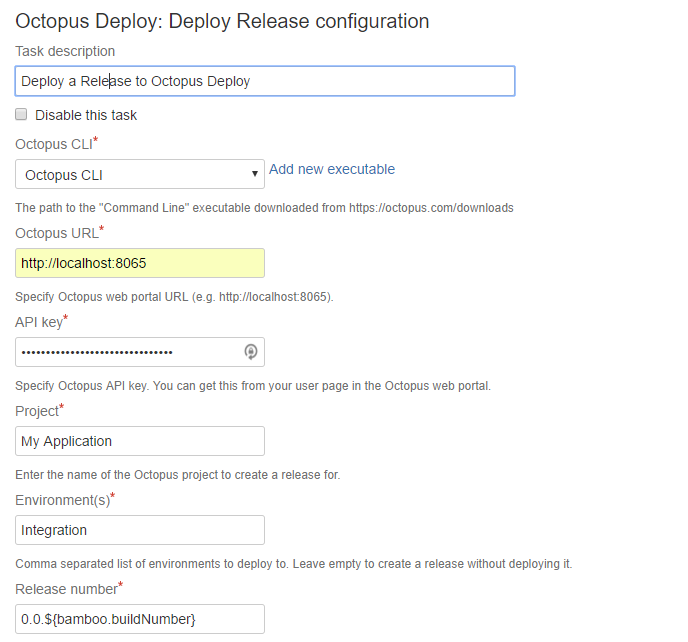 Promote a release (optional, and not recommended)

This steps runs the promote-release command on the command line tool.

Because the promotion from one environment to another is not tied to any particular release number, adding this task to a Bamboo build plan means every time the plan is run (or more importantly rerun), releases will be promoted between environments. This is almost certainly not the desired result, and so it is not recommended that promotions be done as part of a Bamboo build plan.

The Project field defines the name of the Octopus Deploy project that the deployment will be done for.

This Promote from field defines the environment whose release will be promoted to the Promote to environment.

This Promote to field defines the environment whose release will be promoted from the Promote from environment.

All of the Octopus Deploy tasks share a number of common configuration fields.

The Octopus URL field defines the URL of the Octopus Server that the package will be pushed to. This URL must include the scheme http:\\ or https:\\, and also include the port if it is not the default of 80 or 443.

The API key field defines the API key that is used to authenticate with the Octopus Server. See How to create an API key for more information.

The Octopus CLI field references a Bamboo capability that defines the path to the Octopus Deploy Command Line tool. 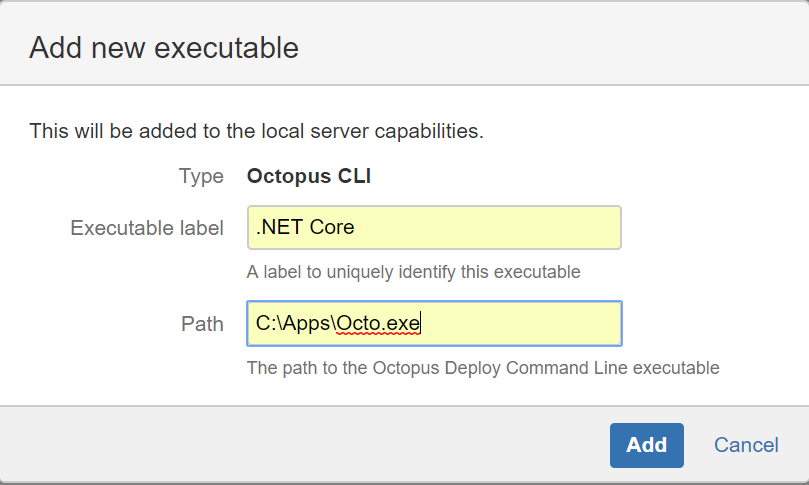 The Enable debug logging option is used to enable detailed logging from the command line tool.

The Octopus Deploy add-on tasks can be used either in Bamboo build or deployment plans. Where you use these tasks is up to you.

If you already have a number of environments set up in Bamboo, it may make sense to create and deploy Octopus Deploy releases from the Bamboo deployment plan. Doing so allows you to retain the familiar Bamboo build and deployment workflow, while having Octopus Deploy do the actual deployment.

The recommended task sequence for a deployment project in Bamboo is this:

These steps will allow packages to be pushed and re-pushed, and new releases to be created, deployed and rolled back to previous releases.

There are some issues to keep in mind when using the Octopus Deploy add-on tasks from a Bamboo deployment project.

The first issue is that the Octopus Deploy: Create Release task is only suitable for creating and optionally deploying new releases, not rolling back to previous releases. Consider these following scenarios:

The second issue is that the Octopus Deploy: Promote Release task may not work as you expect when used with a Bamboo deployment plan. Because the promotion from one environment to another is not dependent on any release versions, every time this step is run it will attempt to promote a release forward in Octopus Deploy, even if the task was run as part of a rollback.

For this reason it is recommended that the promote release task not be used as part of either a Bamboo build or deployment plan.

The Octopus Command Line tool packages for Linux are relatively self contained, but depending on your Linux distribution you may need to install some additional dependencies for the command line tool to run.

For example, in Centos 7 you might see this error:

The solution is to install the packages detailed at the Get started with .NET Core website.

The Bamboo build logs show how the command line tool is run. Look for log messages like this:

This is the command that was run to perform the actual interaction with the Octopus Server, with the exception of the redacted API key. You can take this command and run it manually to help diagnose any issues.

A number of the Bamboo step fields in this document have used Bamboo variables to reference build numbers and local paths.

You can find a list of variables exposed by Bamboo at the Bamboo Variables page.

Error conditions encountered by the add-on have unique error codes, which are listed here.