Using Jenkins and Octopus Deploy together, you can:

Octopus Deploy will take those packages and push them to development, test, and production environments.

Plugins are central to expanding Jenkins' functionality, and a number of plugins are may be needed depending on the projects you are building. Before you start, you'll need to ensure the following plugins are installed and enabled.

If you're building a .NET project:

If you're building a Java project:

Once any of the above plugins are installed, you can then search and install the Octopus Deploy Plugin.

After you have installed the Octopus Deploy plugin. First navigate to Manage Jenkins ➜ Global Tool Configuration to supply the details for the Octopus CLI.

Creating API keys
Learn how to create an API key so the plugin can interact with your Octopus Server.

This is a good time to install the Octopus CLI.

The OctopusDeploy Plugin is a wrapper for the Octopus CLI, the Octopus command line tool for creating and deploying releases, such as /home/your-user-name/.dotnet/tools/dotnet-octo.

You can do either of these:

Then we can let the plugin know where it is installed. 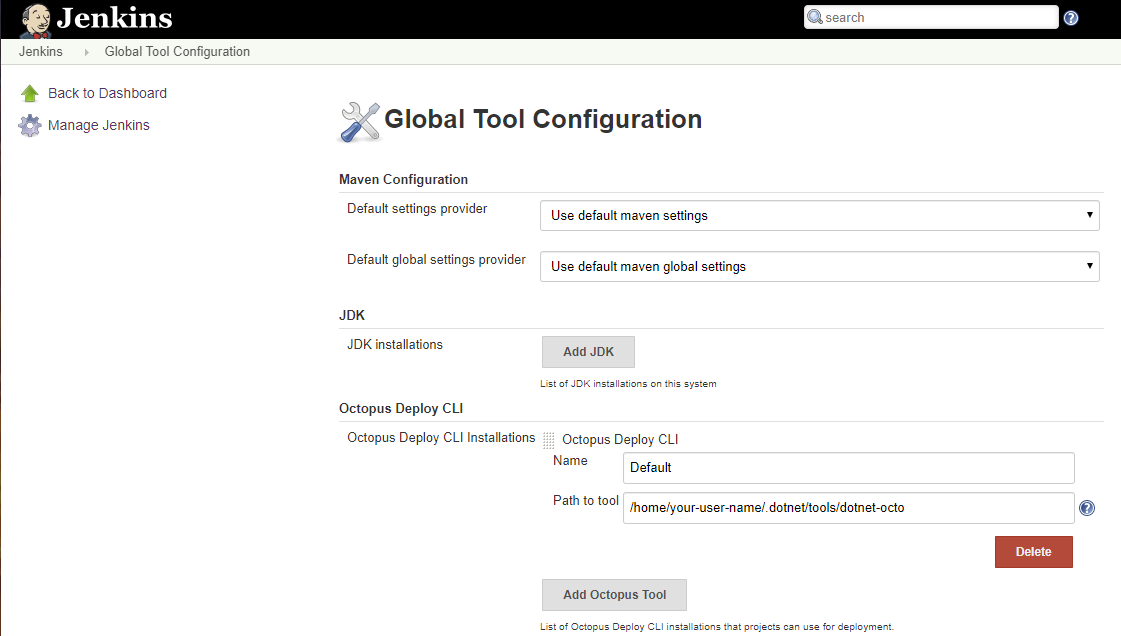 Here you can create the link to your Octopus Server. You can add more than one if your organization uses multiple servers. This is where you supply an API Key, select a Service Account with suitable permission and see how to create an API key for it.

After the Octopus Deploy Plugin is configured, you can configure a Jenkins Freestyle or Pipeline Project.

During our Jenkins job, we will:

Jenkins uses the MSBuild plugin to compile .NET solutions, the Maven Plugin for Java solutions, or a variety of others depending on your tech/language stack.

The Octopus Jenkins plugin comes with these Octopus Build Steps:

You can make use of any combination of these to achieve your deployment objective. They are Build Steps so you can have multiple instances of any of the types, it is a Jenkins limitation to have that with post-build actions.

You can configure your Jenkins project to package your application or other files on disk, without the need of any specification files, e.g. .nuspec.

The two supported formats are zip and nuget. 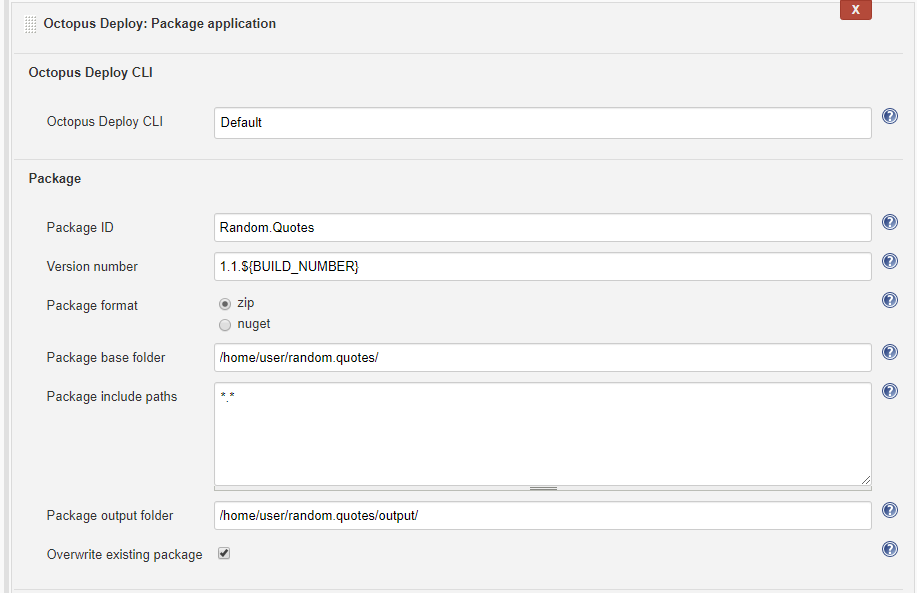 This action works well combined with the next action Push Packages.

Octopus can be used as a NuGet package repository, using this action you can push packages to Octopus.

This action will push all packages that match the Package paths supplied.

Note that the package paths defined here should be full paths, not including any wildcards. 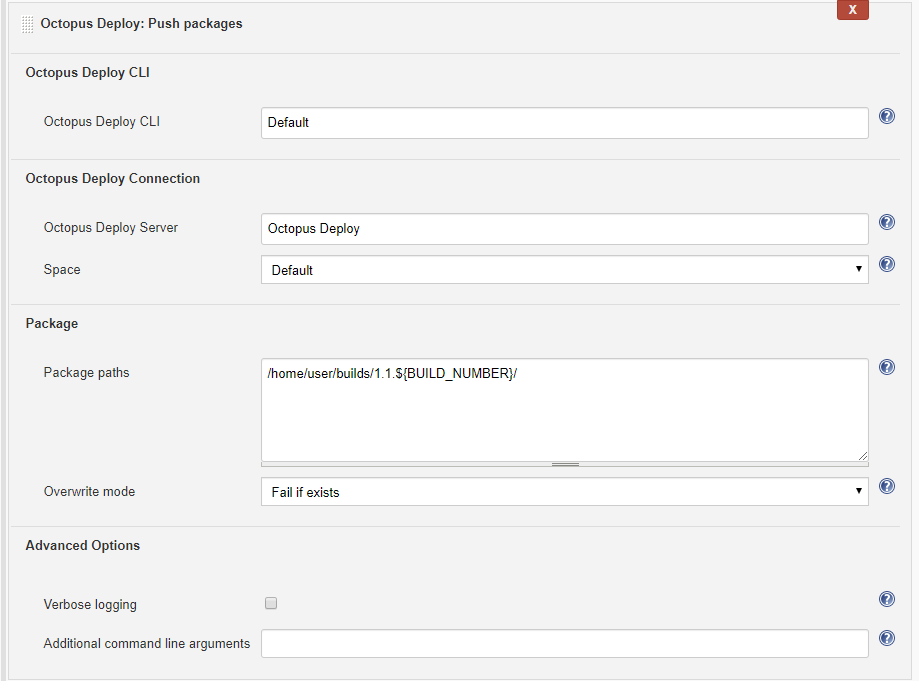 Build information is passed to Octopus as a file using a custom format. The Jenkins plugin also supports this feature. For more information see the Build Information documentation.

This allows you to capture all related details and create clear traceability between build and deployment. 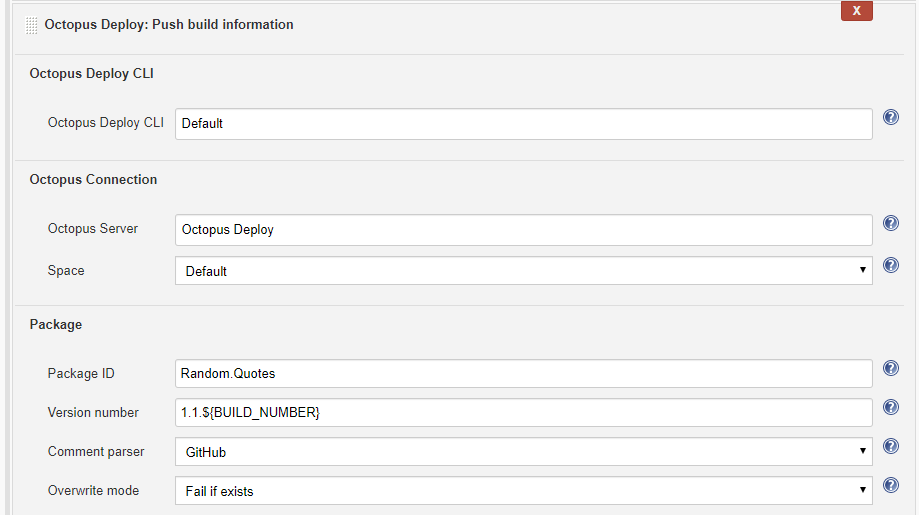 As an example here is what build information looks like when attached to a release: 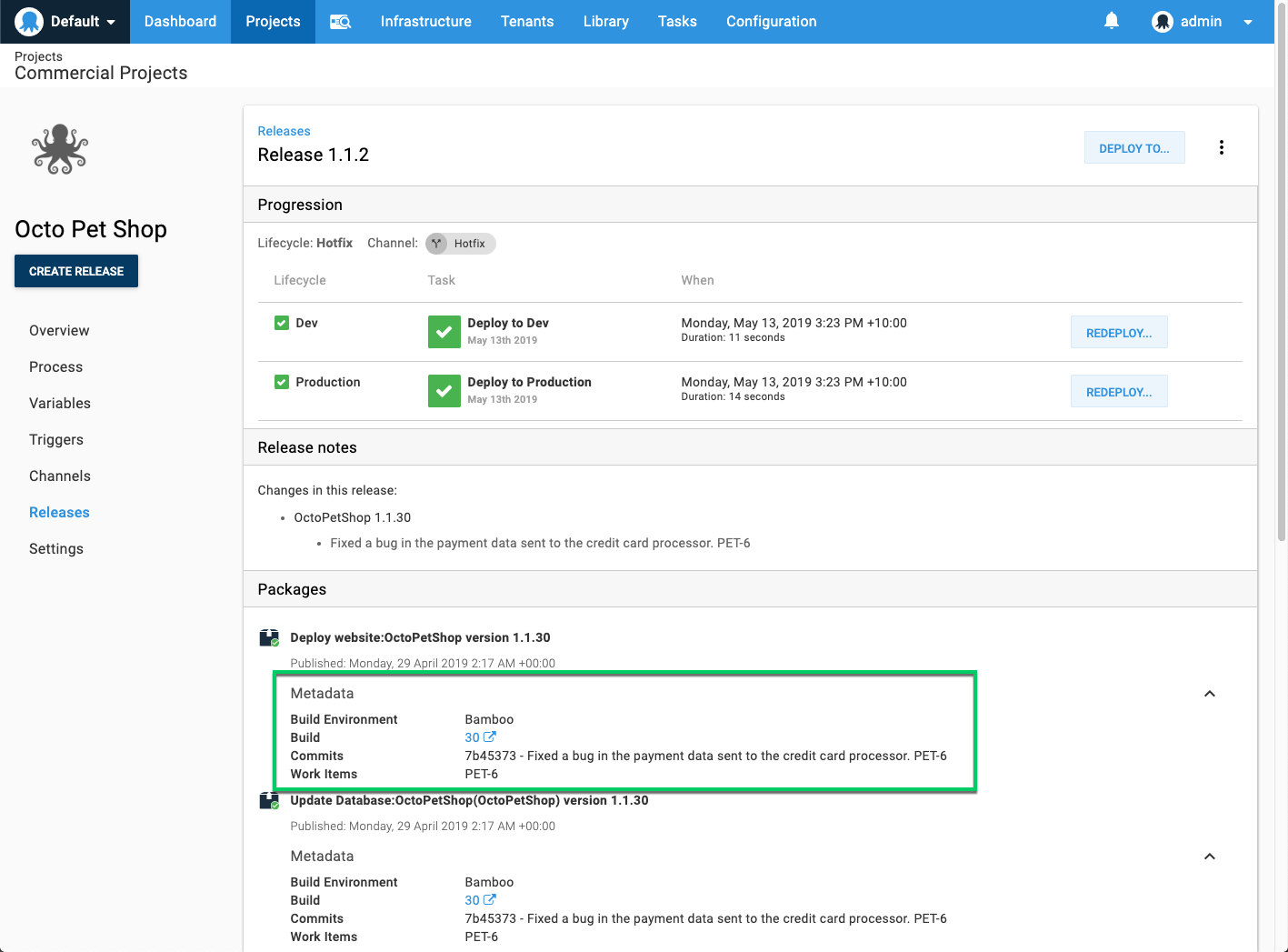 Jenkins is compiling our code and publishing packages to Octopus Deploy. If we wish, we can also have Jenkins automatically create (and optionally, deploy) a release in Octopus along with other supporting actions.

Octopus CLI more information
Learn more about the Octopus CLI and the arguments it accepts.

When this job runs, Jenkins will now not only build and publish packages, it will also create a release in Octopus Deploy.

As an example here, we're relying on the ${BUILD_NUMBER} value generated by Jenkins to use in the Release Version: 1.1.${BUILD_NUMBER}. 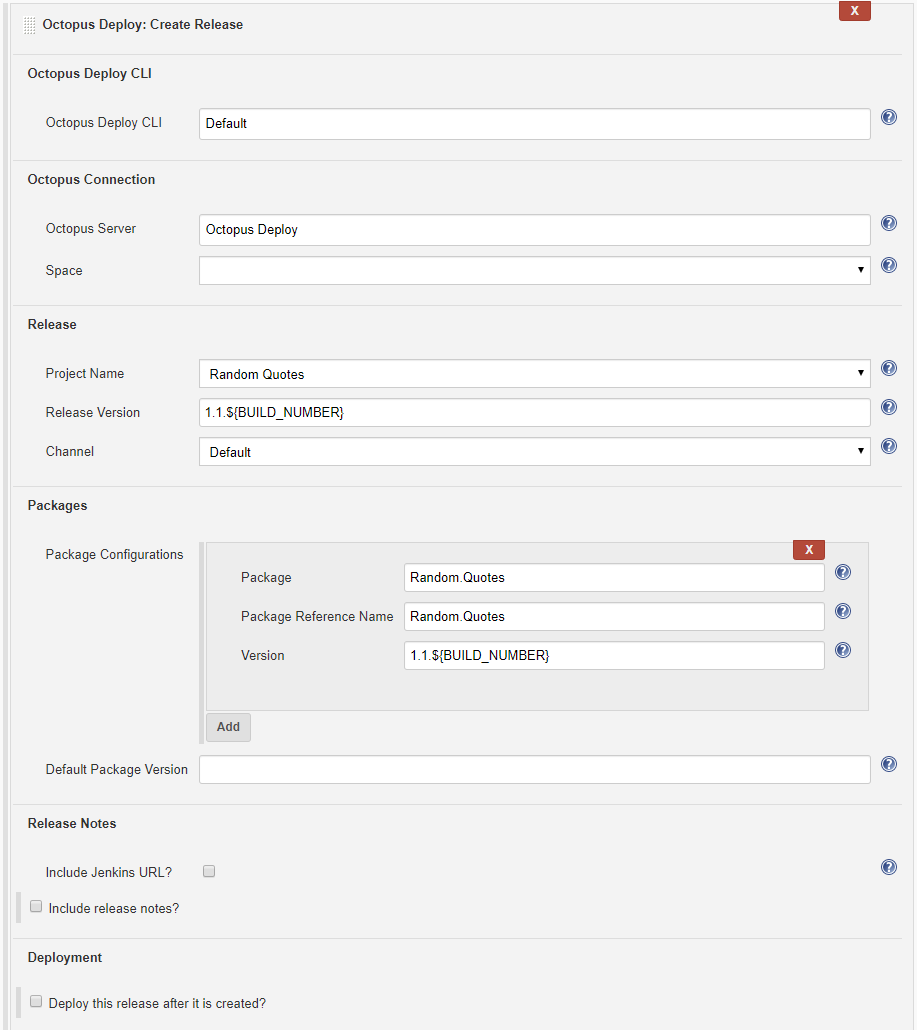 You might like to configure Jenkins to not only create a release, but deploy it to a test environment. This can be done by ticking the Deploy this release after it is created? option.

Alternatively, you can use the Deploy Release action if you need to specify more deployment criteria, for example the channel or other required packages. 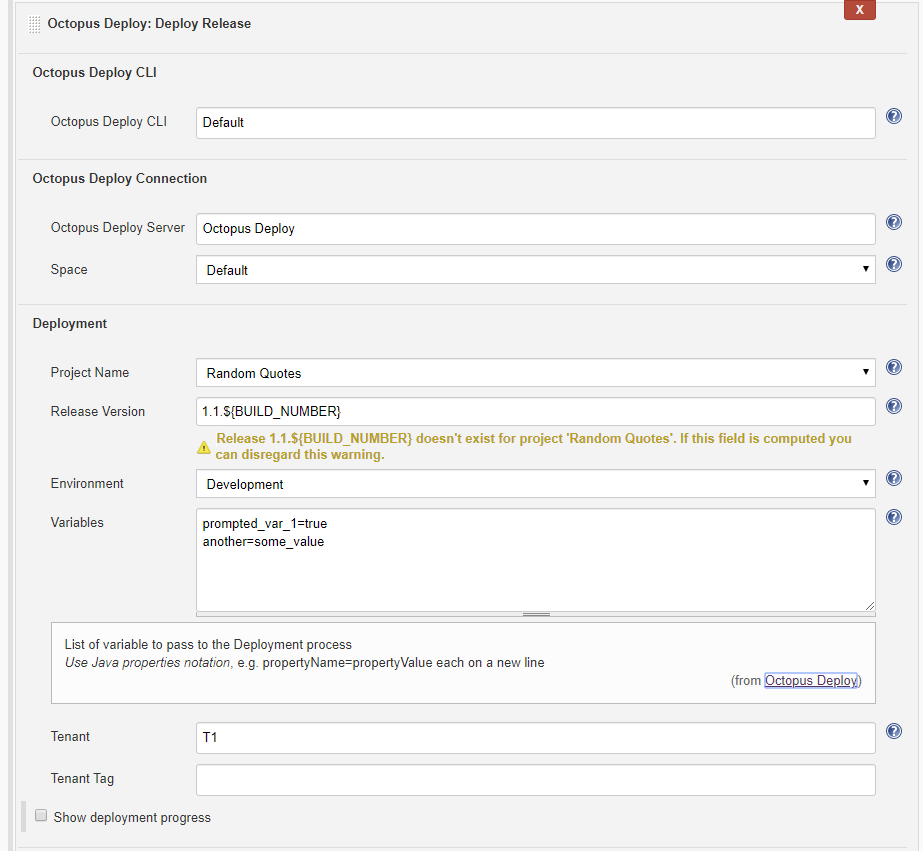 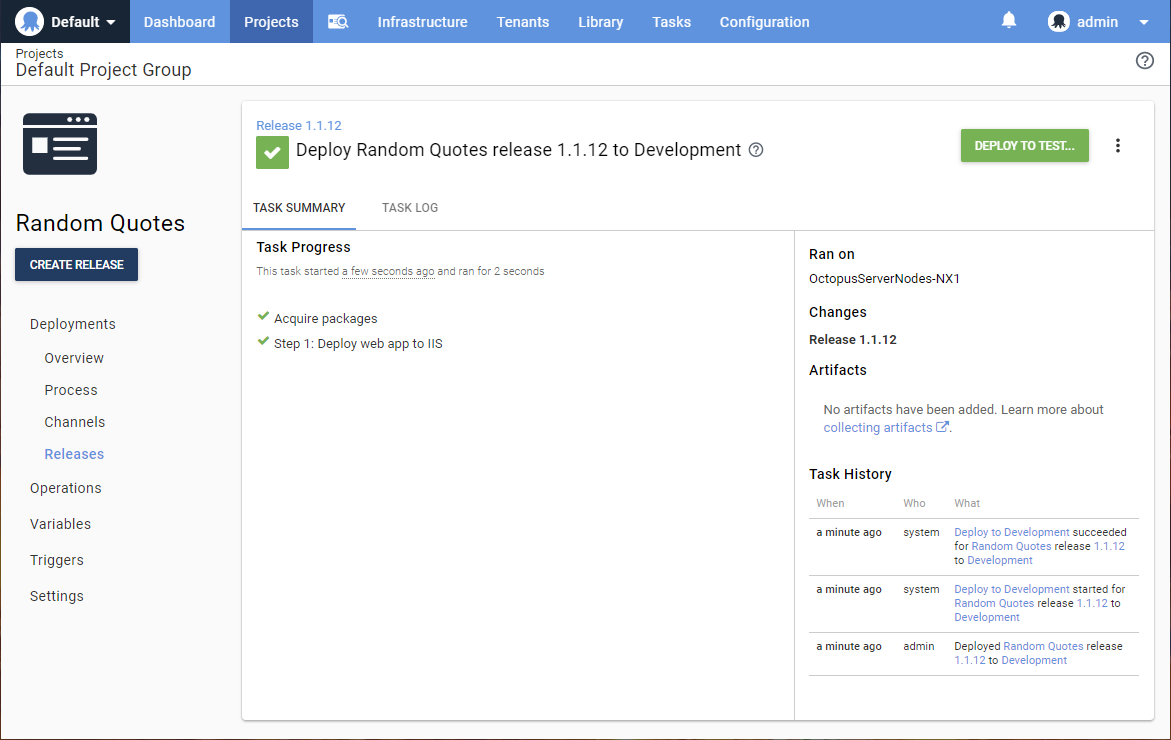 Contributing to the plugin

If you are starting to work on something more detailed please reach out to support@octopus.com to ensure it aligns with what we have going on, and that we are not doubling up efforts.

Have a look at the Octopus-Jenkins-Plugin repository on GitHub. We also have the following developer focused guidelines to get you started working on the plugin.