It's common for companies to integrate Octopus with Active Directory to manage their users and teams. Active Directory is very flexible and can have complex configurations, so we've put together this troubleshooting guide to help people troubleshoot and resolve authentication issues.

This information is provided as a guide to help teams troubleshoot Octopus authentication issues with Active Directory. This, combined with a solid working knowledge of your infrastructure and some perseverance, should help resolve most issues.

Before troubleshooting Active Directory within Octopus Deploy, it is critical to understand how that integration works.

The code will use the method LoginUser() to authenticate the user's credentials.

Assuming the login is successful, Octopus Deploy will create System.DirectoryServices.AccountManagement.UserPrincipal object to query group membership. Group membership query in this order of operations:

When a cross-domain trust is configured, both GetAuthorizationGroups() and GetGroups() methods will include groups in the trusted domains of the user. Octopus Deploy relies on what those methods return to determine group membership. We've found the vast majority of the time; Active Directory issues are a misconfiguration within Active Directory itself. We've provided scripts below where you can take Octopus Deploy out of the equation and test your configuration directly. 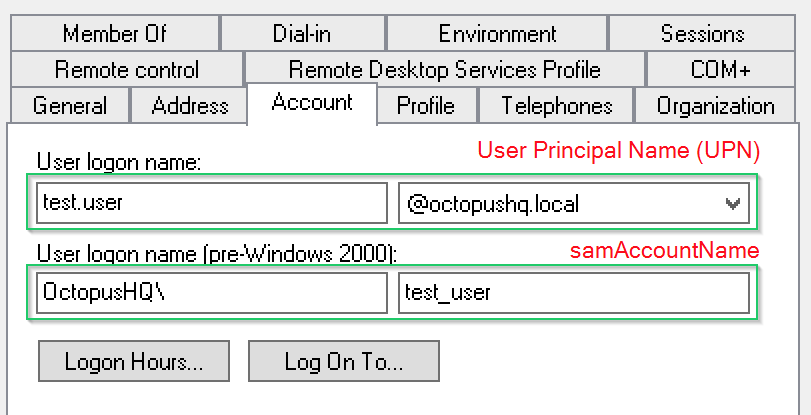 These values can be used by Octopus to uniquely identify which Octopus User Account should be associated with each Active Directory User.

Most errors we've seen are due to a lack of permissions or various active directory configuration issues. Additionally, errors are generally found when trying to retrieve a user's groups. The following are some examples.

The best way we've found to troubleshoot Active Directory issues is by taking Octopus Deploy out of the equation and running the PowerShell script below. This script duplicates the exact logic we use to retrieve a user's groups from Active Directory. The benefit of this script is that you can try different settings and get immediate feedback, whereas it's much slower and disruptive to do the same with the Octopus Server service.

Run the scripts on the same VM hosting Octopus Deploy. If you are running the Octopus Deploy Windows Service as a specific Active Directory account, then run those scripts as that account. Running the script on your work computer under your account can result in inaccurate results.

If specifying a container.

See the following documentation page for further information on configuring Octopus to use a specific Active Directory contianer.

Similarly, the following script duplicates the logic we use to search for groups (when you're trying to find one to add to a Team).

Octopus only uses Security Groups for controlling access permissions. When searching for groups to add to an Octopus team, Distribution Groups will be filtered out.

If problems persist, we suggest turning on active directory diagnostic logging and then executing the PowerShell script above to test changes based on the results. We've found the best way to get actionable details out of the logs is to set the following registry settings on the the server running active directory directory services (i.e. you relevant domain controller).

It's recommended that you backup any registry entries before making changes.

Full credit to this StackOverflow answer for the tip. http://serverfault.com/a/454362

The diagnostic logs can be viewed in the Event Viewer. 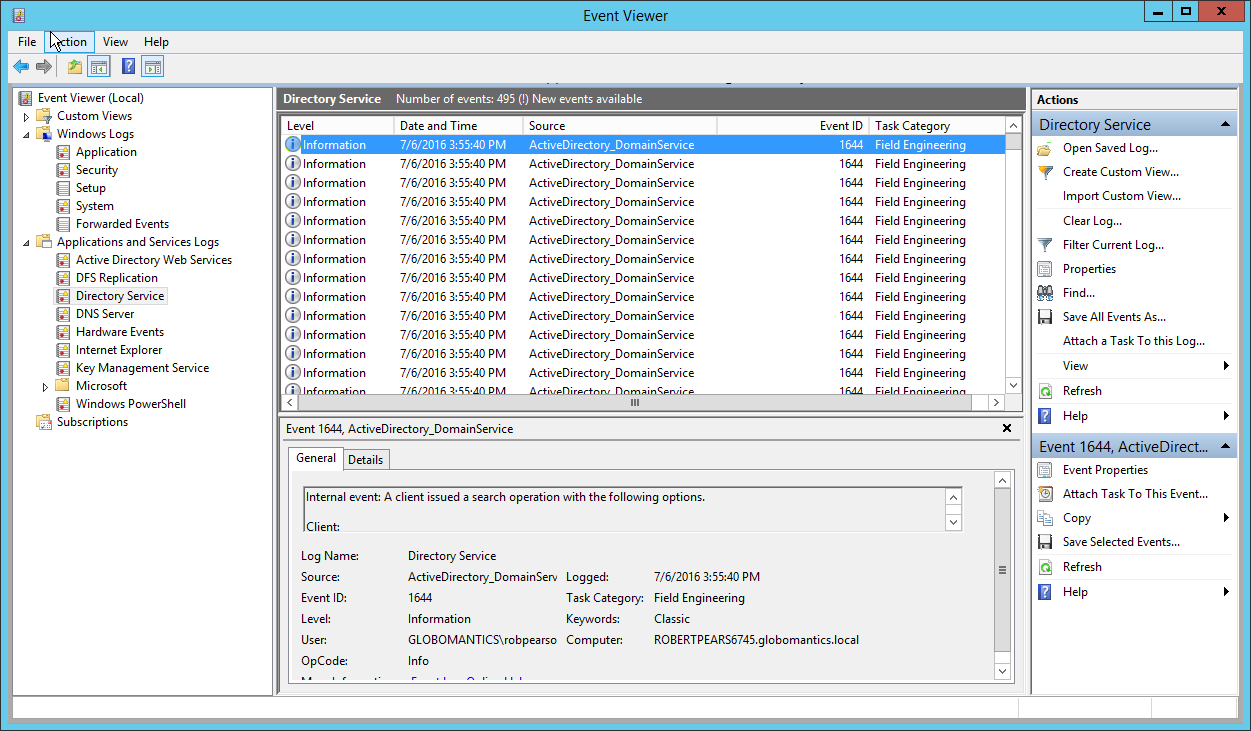 Remember to reset the registry values once you're finished troubleshooting.

Read-Only domain controllers are not supported

If there are any development teams willing to investigate RODCs further, our AD/Directory Services authentication provider is open source (if you are using Octopus 3.5+), so please feel free to checkout the current implementation if you wish to "roll your own" AD provider that includes support for RODCs and share with the Octopus community. ​:smiley:​

Run as a different user not working

If you are signed into your Windows AD account and wish to sign in as a different AD user to Octopus, you need to do so via forms-based authentication and login with a fully qualified domain username (eg. domain\user). You cannot right-click and launch your browser as a different AD user.

If forms-based authentication has previously been disabled, you may re-enable it again by running the following command:

In scenarios where you have to cross domain boundaries, issues can easily arise due to service account permissions. One such issue can occur when you have users who are members of groups from multiple domains. In this scenario, you may find that Octopus can only determine the groups in the same domain as the user itself and as such the user won't be treated as though they are in all of the correct teams.

The cause of this relates to the permissions for the user the Octopus Server is running as. Specifically, it is missing the "Read member of" permission in the domain(s) of the groups it isn't able to retrieve. This can include the domain the service account itself is in (e.g. Domain Users don't get "Read member of" by default).

Integrated authentication across domains not working

Octopus Server 2020.1.x has a known issue with users signing in across domains. The underlying cause relates to server moving from .NET Framework (HttpListener) to .NET Core (HttpSys). For more information about the issue, see this GitHub issue. For confguration guidelines and troubleshooting integrated authentication, see our Active Directory authentication guide.

For users on a different domain to the domain the Octopus Server is a member of, the workaround is to use forms authentication instead of the Sign in with a domain account button. As of 2020.1.7 the server will detect this issue when users attempt to sign in across domains, and it will provide guidance to those users who are impacted.