Triggers are per-project settings that execute an action in response to an event. For this example we will create an automatic deployment trigger so that machines in the TradingWebServer role are automatically kept up to date with the latest releases for OctoFX.  Triggers can be found by selecting the Triggers menu item on the project screen. 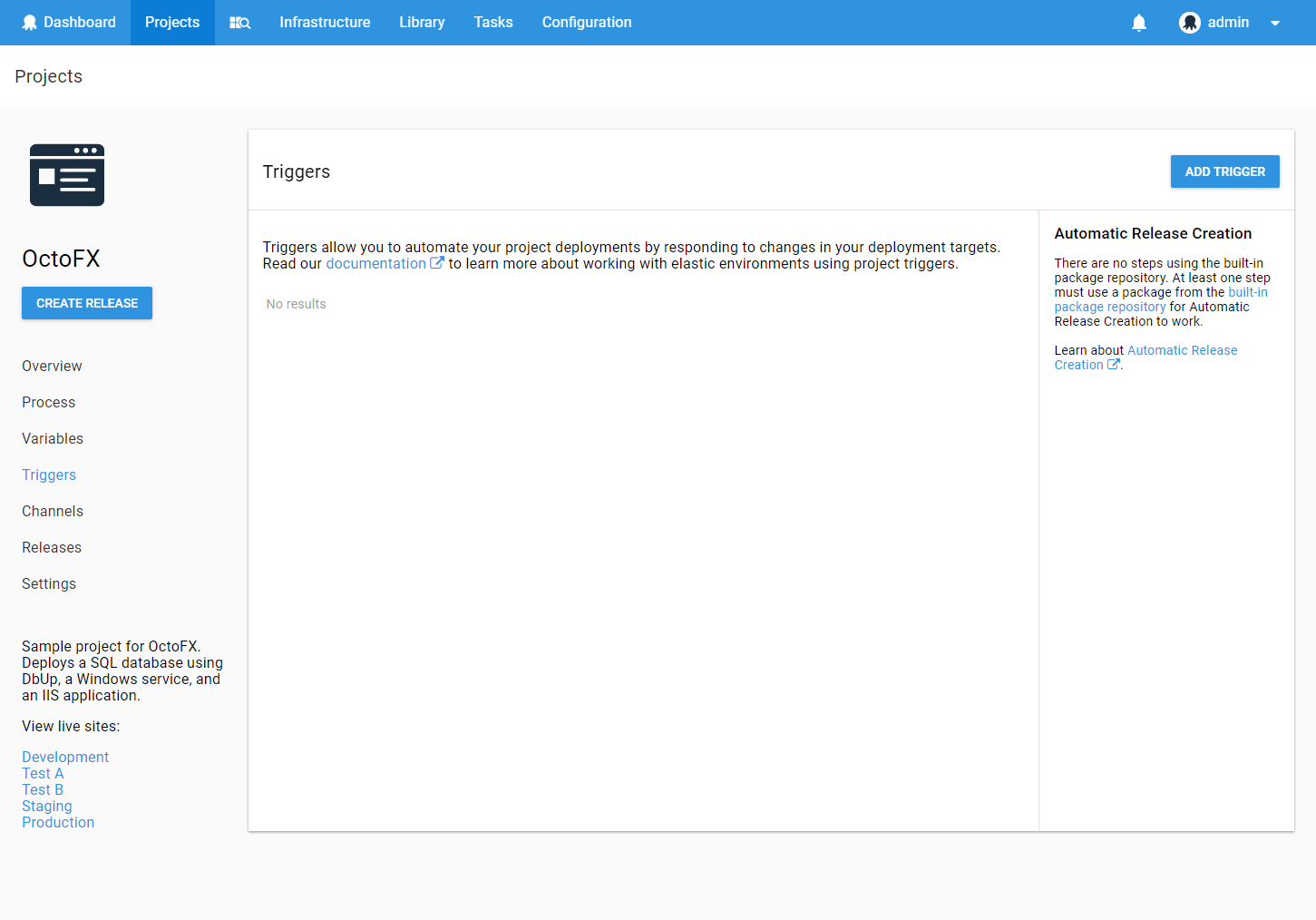 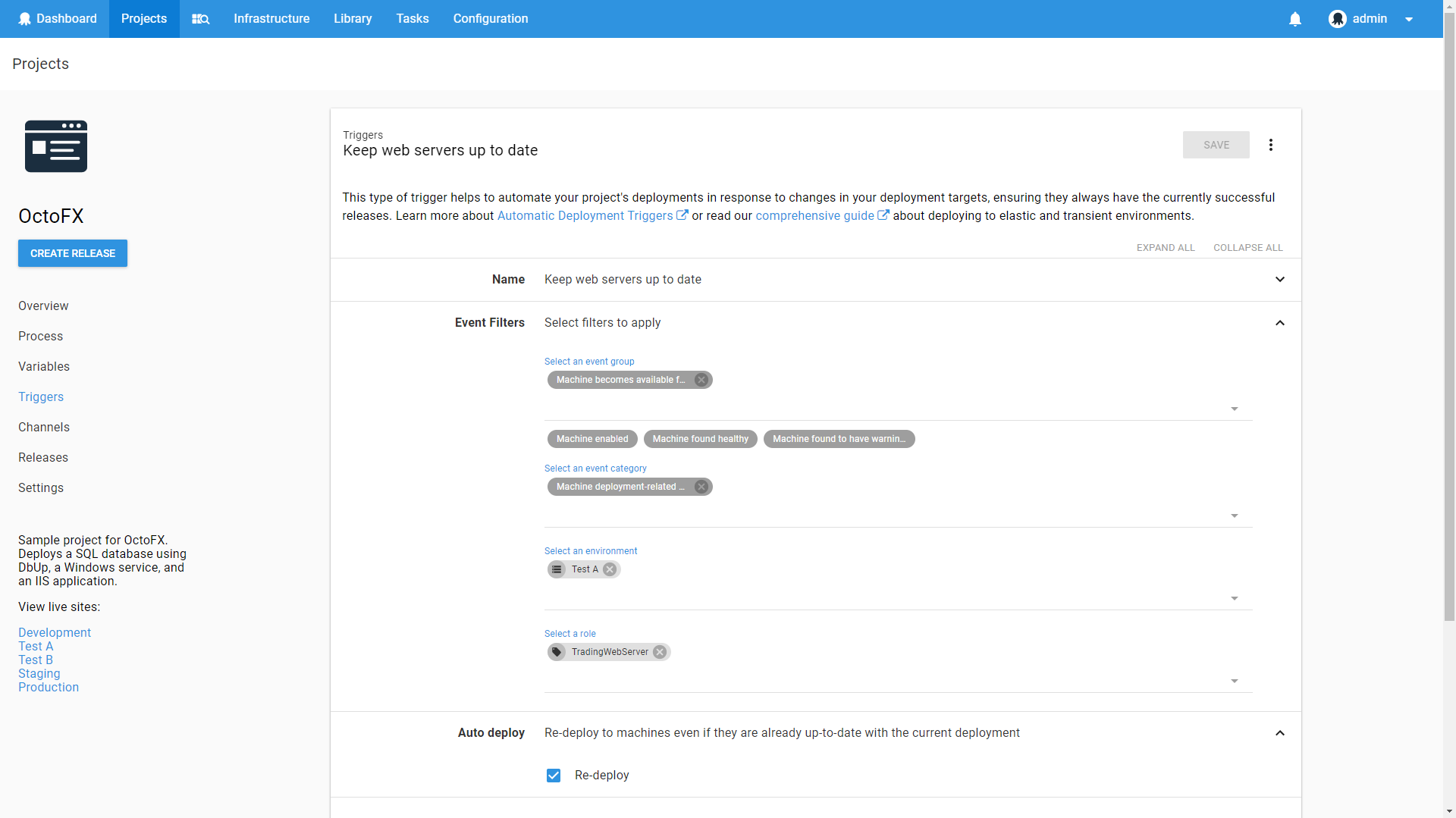 Once the trigger has been created, it will ensure that any deployment targets matching the trigger criteria will be kept up to date with the latest release of the project.

To test the trigger, we will disable a deployment target, deploy to that target's environment and then re-enable the target.  Octopus should automatically deploy the release to the target when it is re-enabled. 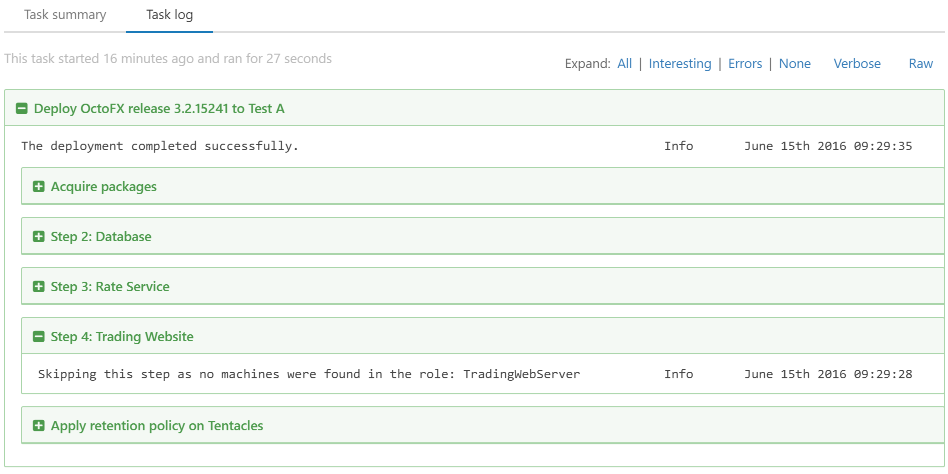 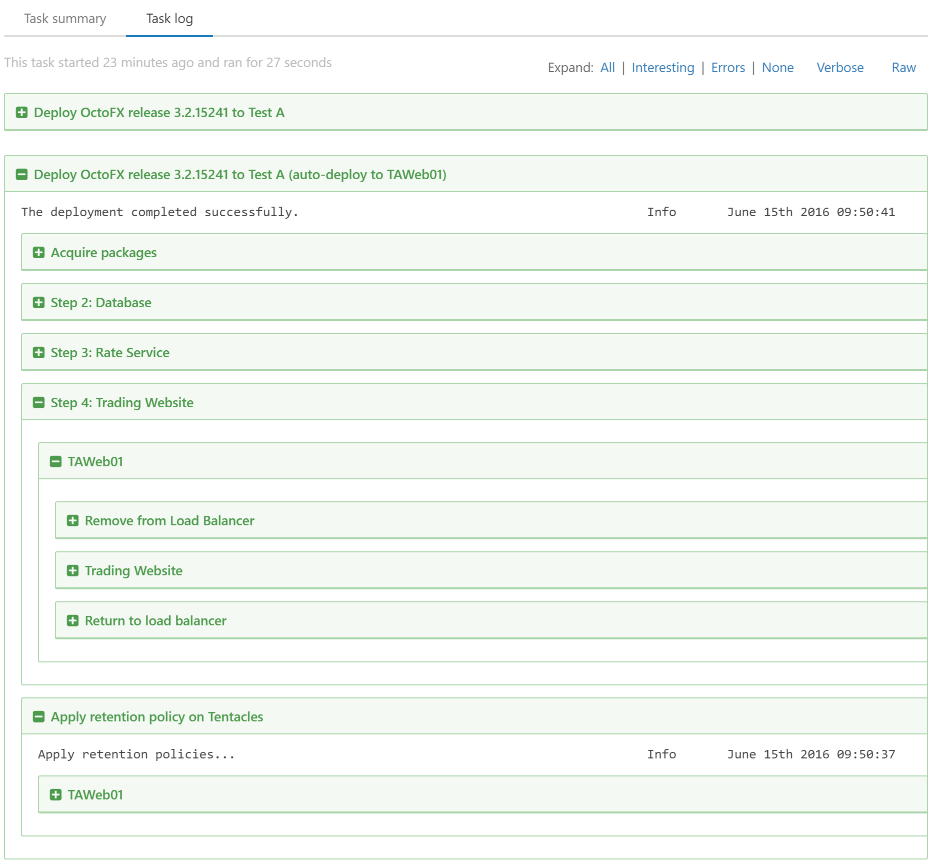 Automatic deployments attempts to calculate the release to use for a project and environment (using the current and successful release that has been deployed, as shown in your Project Overview dashboard).  In some cases the calculated release may not be the release that should be automatically deployed, or Octopus may not be able to find a deployment for an environment (maybe you have a release, but have not yet deployed it anywhere).  It is possible to explicitly set the release that should be automatically deployed by overriding the automatic-deployment-release. Overrides can be configured using the Octopus CLI or through Octopus.Client.  Overrides define a release for a project when deploying to an environment (this can, for example, be useful for cloud-testing-automation when standing up new cloud infrastructure).  For multi-tenanted deployments, overrides may be configured for each environment/tenant combination.

Octopus will attempt to automatically deploy the current releases for the environments that are appropriate for a machine. The current release is the one that was most recently successfully deployed as shown on the project dashboard. If a release is deployed and it fails, the previous successful release will continue to be automatically deployed. Octopus will not attempt automatic deployments for a project/environment/tenant while a release is being deployed to that project/environment/tenant. Once the deployment finishes, Octopus will deploy to any machines that require the deployment.

Troubleshoot automatic deployment by viewing the auto deploy logs from the diagnostics page in the configuration section or viewing the Audit log.

Why isn't my trigger working?
The verbose logs usually contain the reason why a project trigger didn't take any action. For example:

Auto-deploy: Machine 'Local' does not need to run release '2.6.6' for project 'My Project' and tenant <none> because it already exists on the machine or is pending deployment.

With machines now being kept up to date automatically you may be interested in cleaning up environments to automatically remove machines when they are terminated.