Correctly versioning the packages you deploy with Octopus Deploy is important so the right version gets deployed at the right time. With Azure DevOps and Team Foundation Server (TFS), specifying a package version isn't always straightforward.

This guide shows you how best to version your builds and packages in Azure DevOps and TFS, whether you're using OctoPack, or the Octopus Extension in the Visual Studio Marketplace.

In Team Build (the build system in Azure DevOps and TFS), build numbers may be in a format that doesn't represent a valid SemVer number.

For example, Microsoft's Build Number format documentation gives an example: $(TeamProject)_$(BuildDefinitionName)_$(SourceBranchName)_$(Date:yyyyMMdd)$(Rev:.r) will result in a version number like Fabrikam_CIBuild_main_20090805.2.

While this is a valid Team Build build number, it can cause issues when trying to pack the build output into a NuGet package or zip file for Octopus.

Packages used by Octopus must conform to SemVer 1.0 or 2.0 depending on the version of Octopus you're using.

The link above explains versioning in detail, but in its simplest form it means two things:

As you can see, a package version of Fabrikam_CIBuild_main_20090805.2 won't be valid will cause issues!

Our recommended build number format is: x.y.$(BuildID) where x and y are integers. You can change them when you want to bump a version. This format will produce a three-part version number like 1.2.350. 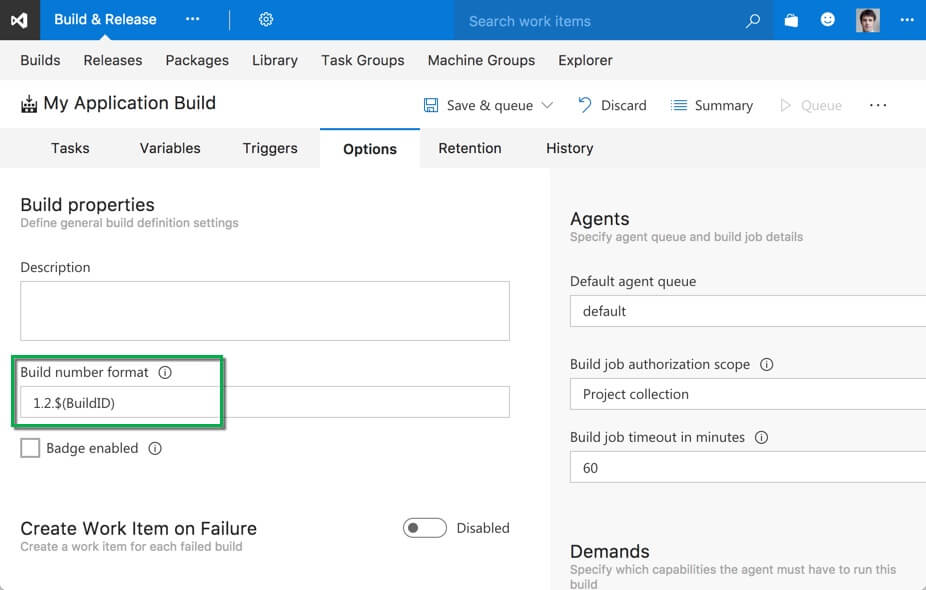 If you have a build for a separate branch, it's a good idea to add the version tag. For example: x.y.$(BuildID)-feature-1 will produce a version number like 1.2.350-feature1. Even better, you can use the $(Build.SourceBranchName) variable to set it to the branch name.

The only downside of this numbering format is the $(BuildID) variable always increases, and does so at the Project Collection level. That means it doesn't reset when you increment your major and minor versions, and if you have multiple builds in your Collection, numbers will be skipped.

Other extensions such as gitversion can also be used to easily get SemVer compliant build numbers.

There are two standard ways to package your build output in Team Build. The first is to use OctoPack, and the second is to use the build tasks in the Octopus marketplace extension.

You can mix and match these two methods. For example, you might prefer to use OctoPack and the /p:RunOctoPack MS Build argument, but then use the Push and Create Release tasks from the extension.

Unless told otherwise, OctoPack will attempt to set the package version itself. You can see exactly how it tries to find a version on this documentation page.

More often than not, the version number will come from the [assembly: AssemblyVersion] attribute found in the AssemblyInfo.cs file (usually in the Properties folder of your project).

Setting the AssemblyVersion number to x.y.* will fix the two most common problems here. A version like 1.0.* will result in an always-increasing version number.

One problem remains - particularly for web projects. If you only change content files, triggering a new build won't update the version number because Team Build realizes no compilable code has changed. OctoPack won't get a new version number!

You can use the additional MSBuild arguments for OctoPack to give yourself more control over the packaging process.

If you're using the new Octopus Deploy extension from the Visual Studio Marketplace, you'll have access to a new Package Application build task.

This task does not provide you with a default version number - this is something you have to set yourself. Clearly it wouldn't be feasible to change this value every time you do a build, so we recommend you make use of the build variables that Team Build provides.

Build and Release variables can be found in the Microsoft Documentation, but the more useful ones include:

There are two options we recommend for specifying a version number to the Package Application task.

We recommend the second option for a few reasons.

First, it's very easy to match the build to the package because they'll have the same number, and secondly, if you have multiple pack steps, you only need to change a single version number.

Specifying the files to pack and push

One of the frequent causes of issues when using the Octopus build tasks is properly specifying the folders to pack and the NuGet package to push. Especially if you're using the hosted build server, it can be hard to figure out where everything ends up when the build is running.

Rather than guessing, it can be helpful to specify these folders specifically. Again, there are some useful build variables you can make use of.

By way of example, here's a nicely-configured set of build, pack, and push steps. 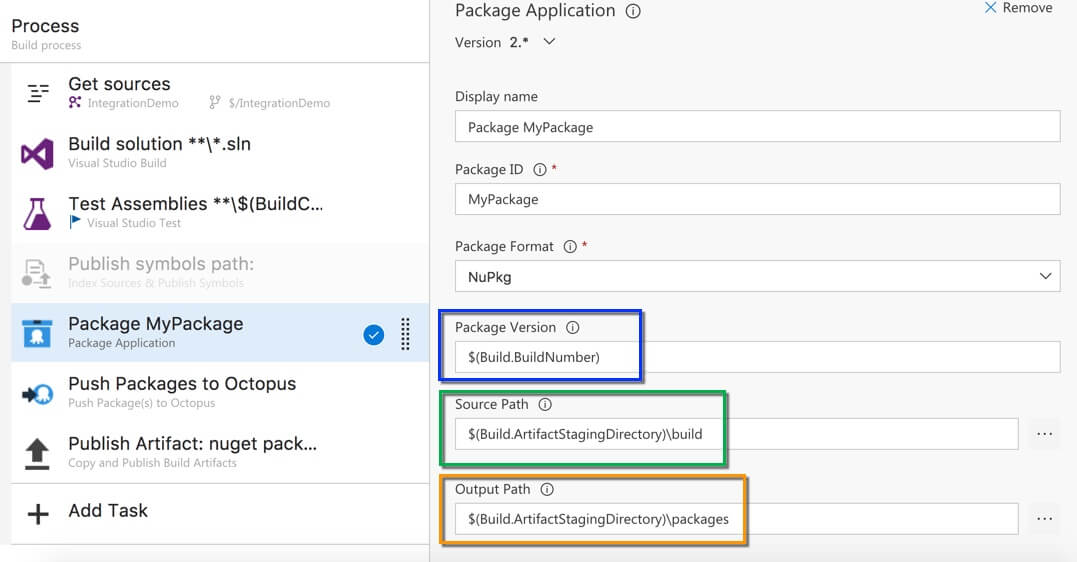