The Jira Service Management (JSM) Integration Early-Access Program (EAP) is available in Octopus
2022.3.12101 or later. Contact us to request access to this feature.

The Octopus Deploy/JSM integration allows users to block the execution of specifically configured deployments unless they have a corresponding approved JSM Change Request (aka issue).

To enable this behavior, both the Octopus Project and Environment you are deploying to must be configured and the JSM configuration is set up before deployments can be managed.

The JSM integration requires Octopus 2022.3.12101 or later and an Octopus license with the JSM Integration feature enabled.

Before you can use the Octopus Deploy/JSM integration, you'll need to:

The instructions in this section will require a JSM Administrator.

The integration will require a user account in JSM. The recommendation is to create a service account specifically for Octopus.

Take note of the password assigned or generated for this user.

For the JSM approval checks to be performed as part of the deployment process, an appropriate Octopus license must be configured in your Octopus instance.

A JSM enabled Octopus license must be requested from Octopus directly, and cannot be managed through the self-service process. To request a license register for the JSM Early Access Program

Once you have received your feature-enabled license, you can install it by navigating to Configuration ➜ License.

An enabled license will include a block similar to below: 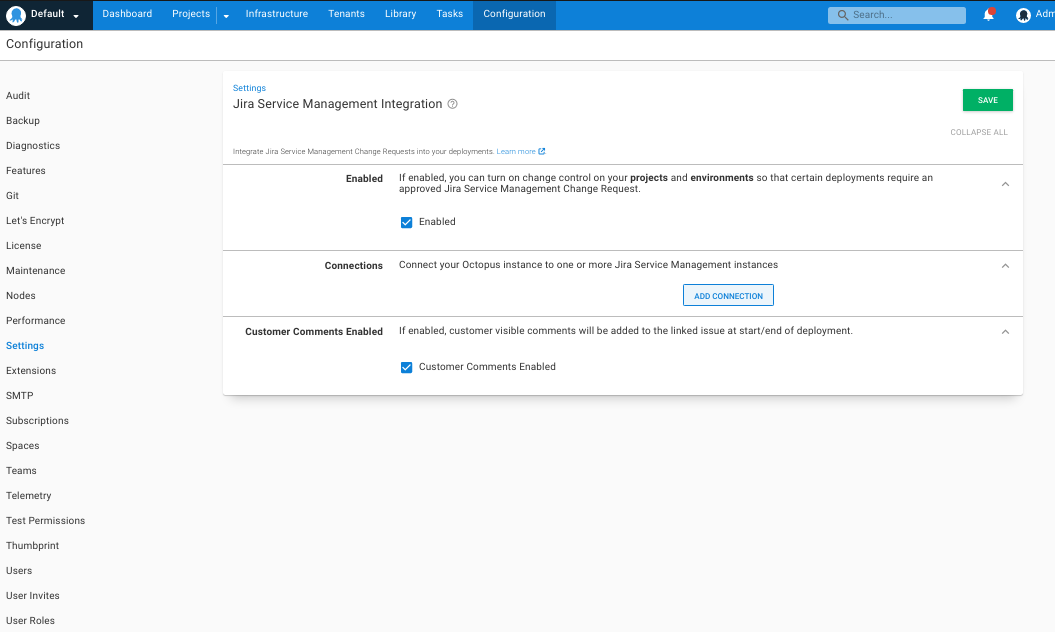 Click on ADD CONNECTION and fill out the details. The JSM Base Url should be the root URL and include the protocol e.g. https:// 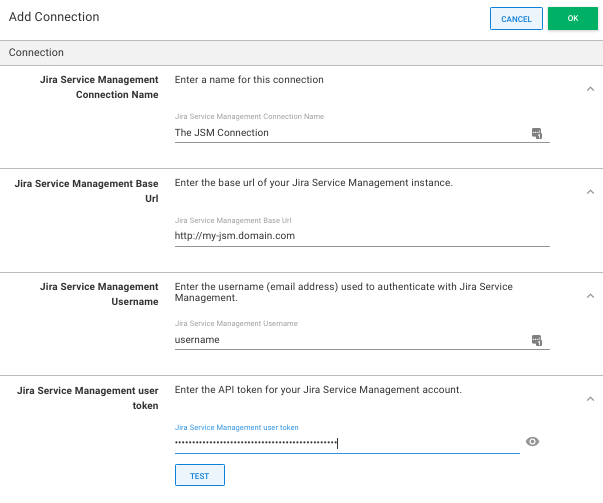 Press TEST to ensure that the connection details are working.

If enabled, this feature will result in a linked change request having one or more Comments added during the deployment lifecycle which record details about the deployment and its execution status. 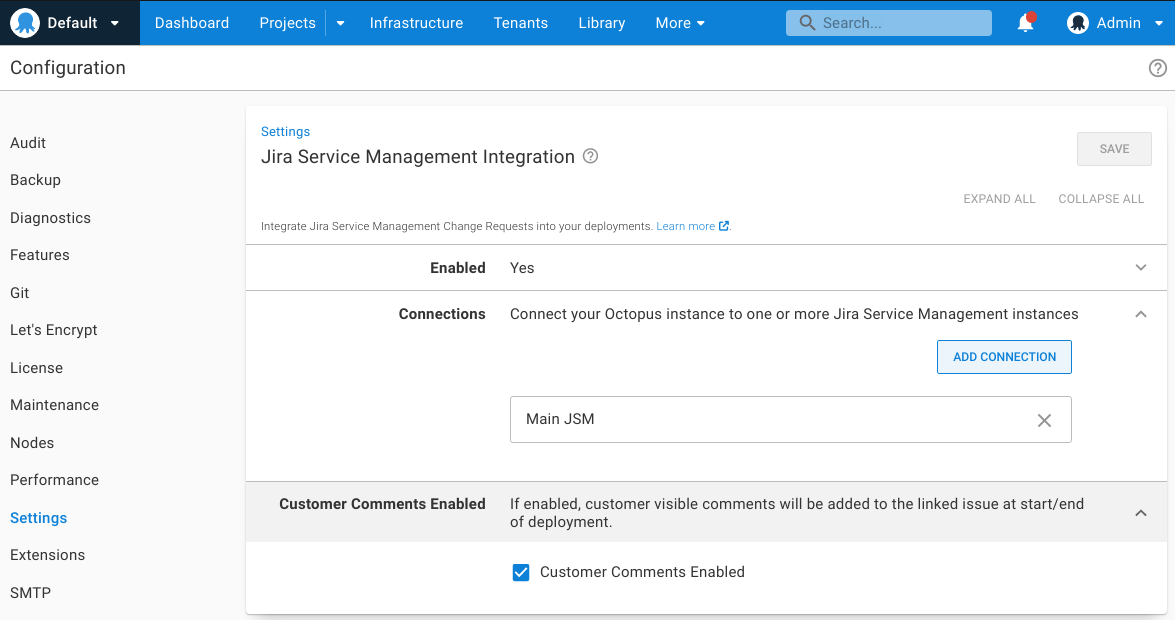 To enforce a deployment to require an approved CR, the Change Controlled setting needs to be enabled in both the project and the environment it is being deployed to.

Setting up projects for CR approval

To enable a project to enforce a requirement for an approved CR: 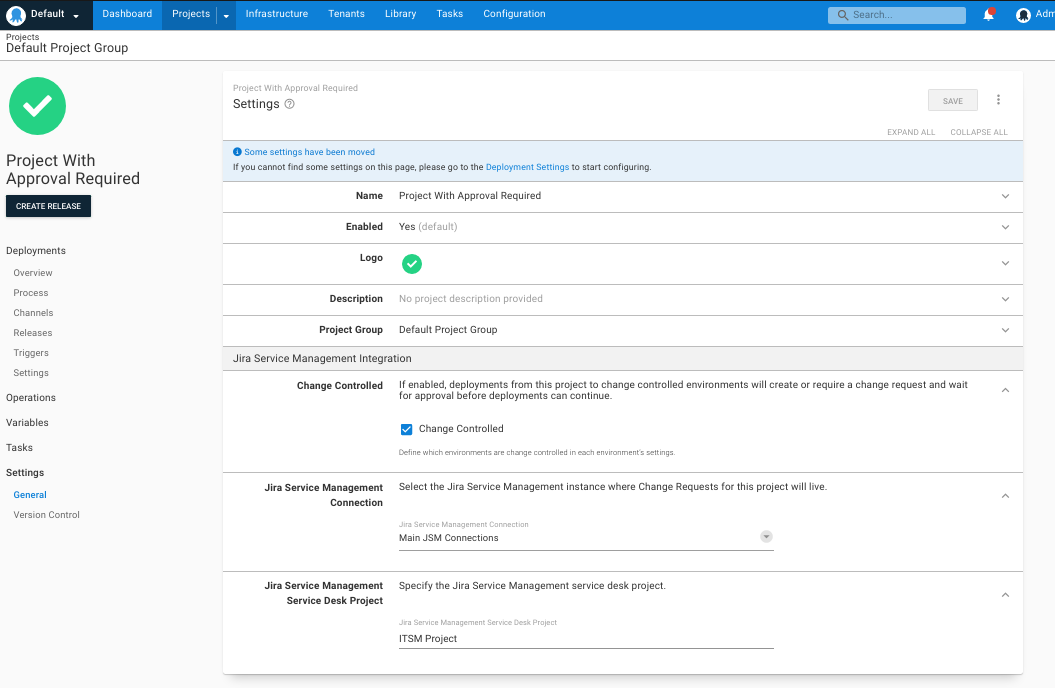 Supplying the CR number to a deployment

If you add a variable to your project named Octopus.JiraServiceManagement.ChangeRequest.Number, then an Issue will not be created, and instead, the supplied number will be used during the approval check. This variable can also be scoped or configured as a Prompted variable.

Setting up environments for CR approval

To enable an environment to enforce a requirement for an approved CR, navigate to { {Infrastructure,Environments}}, edit the environment via the overflow menu and check the Jira Service Management Integration ➜ Change Controlled setting, and then press SAVE.

Deployments where both the project and environment have Change Controlled enabled, will query JSM for an approved Issue before execution can begin.

When a Change Controlled deployment is evaluated for approval, the following checks are performed:

When re-deploying a previous deployment, the same Issue will be used if it is still open. If it is closed the above process will be followed again.

The number of the Issue created or found will appear in the Task Summary tab of the executing Octopus deployment task. Clicking on the CR number in the message will navigate you to the CR in JSM.

Octopus supports matching a CR by setting the Summary of the CR to a well-known format:

The title must match the format exactly, including the double-quotes.

In addition to a change request being approved, a change must also be in its schedule change window in order for the deployment to execute. The change window is controlled by the Planned star and Planned end on the linked Issue.

The following list assumes the linked change is in an approved state.

If at any time a Planned end is exceeded and the linked change request is not approved, the deployment will be terminated.