The recommended way to migrate data to or from an Octopus instance is with the Export/Import Projects feature that was released in Octopus 2021.1. Learn more: Exporting and Importing Projects.

Octopus comes with a data migrator which can help in certain scenarios like moving projects from one Octopus Server to another, and exporting your configuration for auditing in a source control repository.

With the addition of the Export/Import Projects feature, the number of suitable scenarios has been reduced to the following.

In all scenarios, both the source and target Octopus Servers must be running the same version.

The data migration tools are not suitable for every imaginable scenario. In these cases there are better tools for the job:

Sometimes using the data migration tool may look like it could solve a problem, but in fact will make things worse. Here are some scenarios we've seen that are explicitly not supported.

Unfortunately, since the import isn't running all of the same validation checks as the API, using an Export ➜ Modify ➜ Import can modify your data in such a way that is invalid for the API. Some scenarios might work but because at this point you're effectively hand editing your data, this isn't something we support. 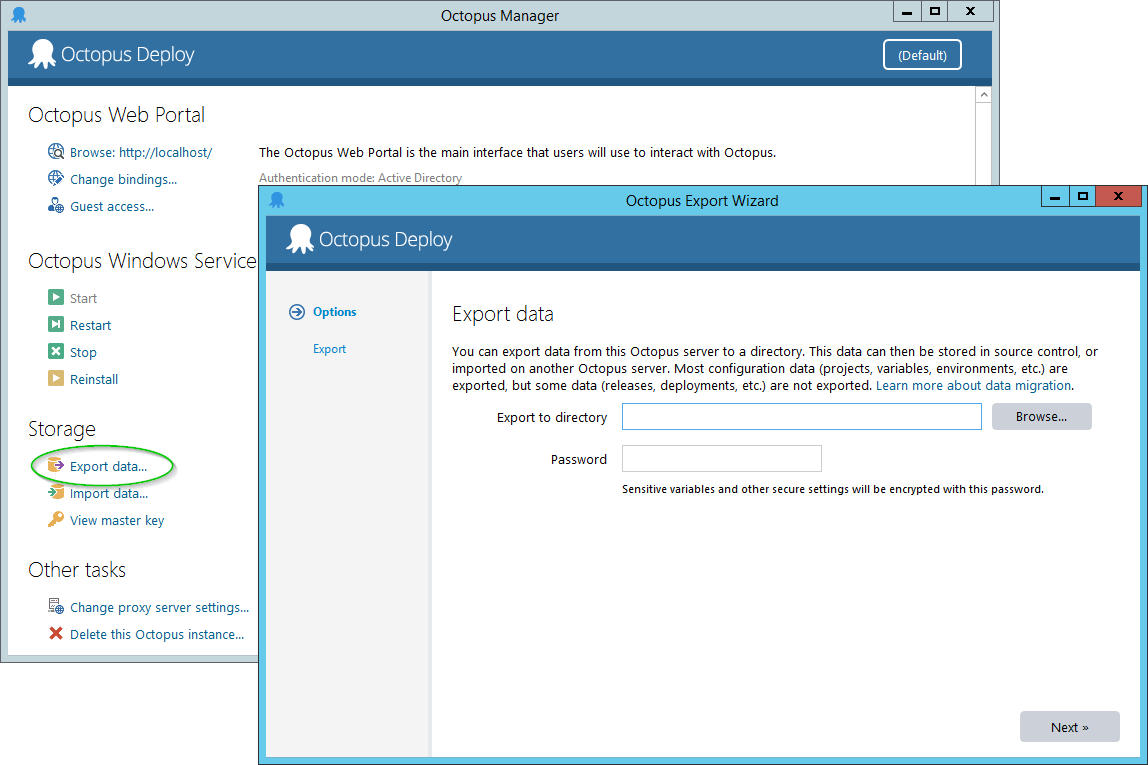 We have tried to make the exported file structure predictable and easy to navigate.

It's a good idea to perform a backup before attempting an import. 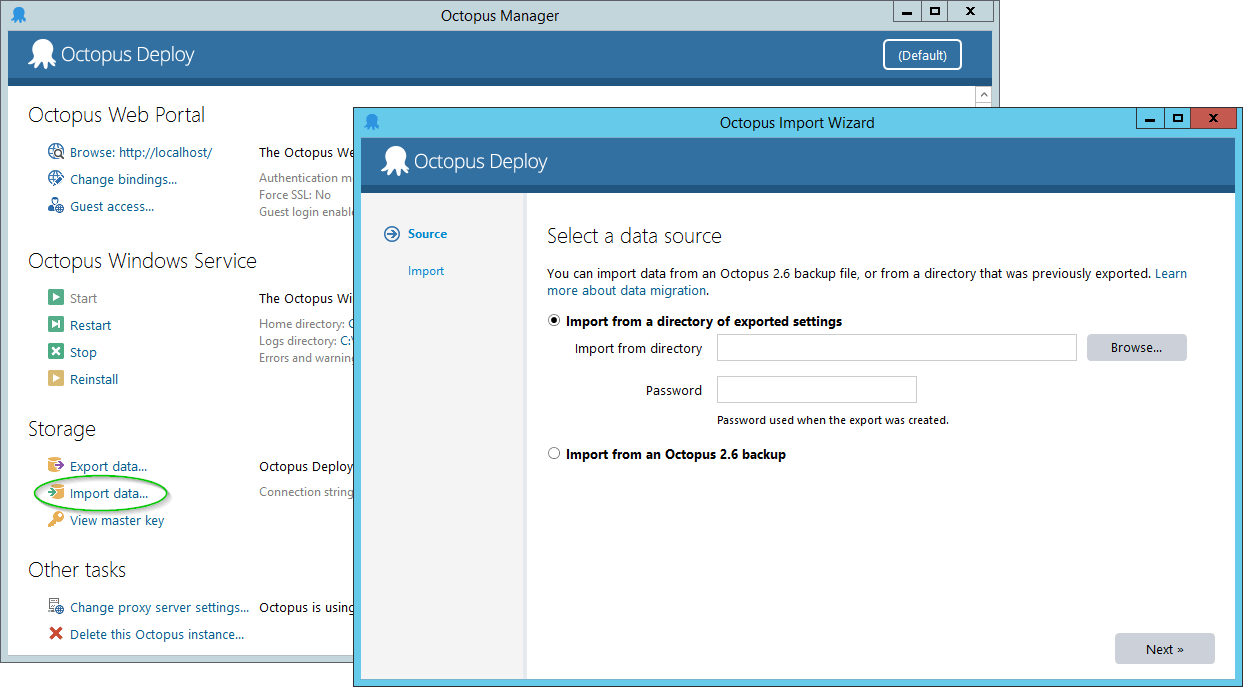 You'll get a chance to preview the changes first, and you can tell the tool to either:

Learn about how conflicts are handled.

All changes are batched into a single SQL transaction; if any problems are discovered during the import, the transaction will be rolled back and nothing will be imported.

How do you handle sensitive values?

When you export data you will be asked to provide a password, and your secrets will be decrypted using the source server's Master Key, then re-encrypted into the exported files using the password you provided as the key.

Now when you import data you will be asked to provide the same password so your secrets can be decrypted from the files and imported into the target server to be re-encypted using its Master Key.

Can I track my Octopus configuration using source control?

Yes, though it is an advanced scenario you will need to take care of yourself. We are looking into other methods for defining your deployment processes as code.

In the meantime this process can be used for advanced auditing of your Octopus configuration:

We've tried to make the JSON as friendly and predictable as possible so that if you commit multiple exports, the only differences that will appear are actual changes that have been made, and comparing the changes will be obvious.

How do you match existing data?

The import process matches on names instead of IDs. If an exported project has the same name as a project in the target server, they are considered as the same project.

How are conflicts handled?

In general, the data being imported is treated as the source of truth, and will wholly overwrite any matching documents.

There is no out-of-the-box way to "merge" deployment steps, or other more granular changes when importing.

Can I manually resolve conflicts?

There is no tooling to help you resolve conflicts in a more granular way. The data migration tooling is optimized for data flowing in a single direction where there is one source of truth.

Why do the exported files contain ID's?

We use the ID's so we can map references between documents into the correct references for the target server. We actually use the names to determine if something already exists. This means you can export from multiple Octopus Servers, combine them together, and then import to a single Octopus Server.

Is there a command-line interface?

Yes! Most of the features are only available via command-line so it is the most common way to perform data migration. Use Octopus.Migrator.exe help to see the full list of commands available. To see an example of the command syntax, you can use the Wizard in the Octopus Server Manager and click the Show script link. 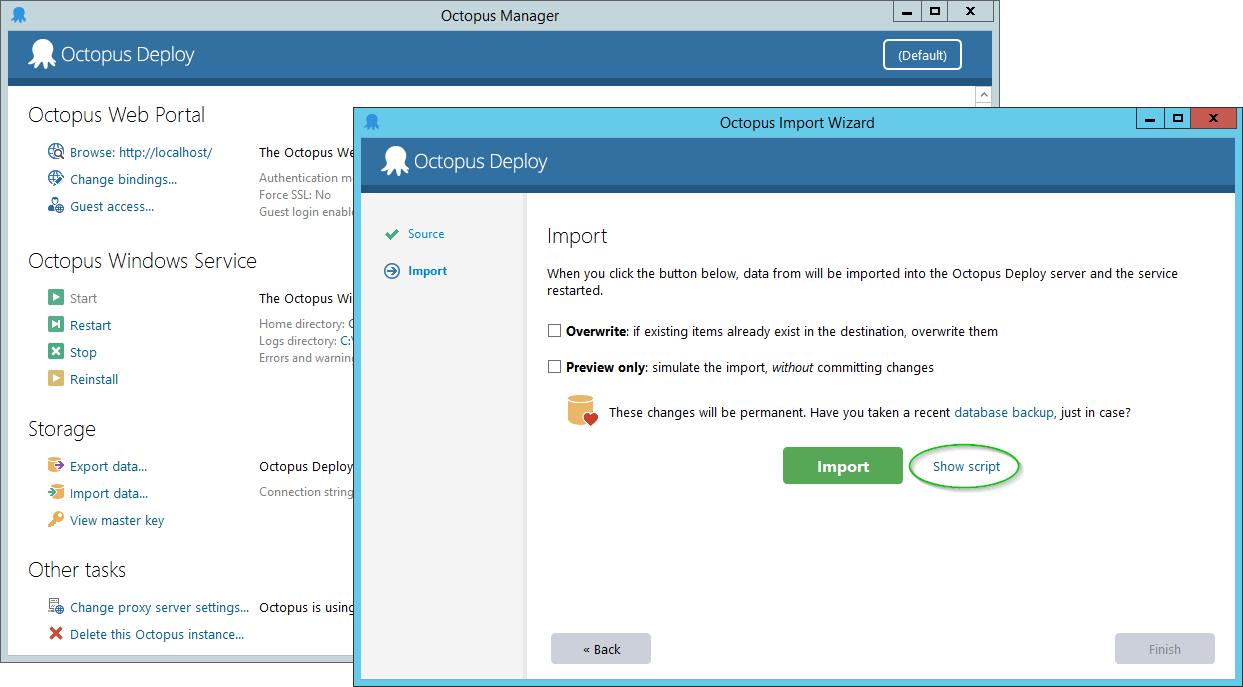