As you deploy your projects, you can assign releases of projects to specific channels. This is useful when you want releases of a project to be treated differently depending on the criteria you've set. Without channels, you could find yourself duplicating projects in order to implement multiple release strategies. This would, of course, leave you trying to manage multiple duplicated projects. Channels lets you use one project, with multiple release strategies.

Channels can be useful in the following scenarios:

When you are implementing a deployment process that uses channels you can scope the following to specific channels:

You can also define versioning rules per channel to ensure that only versions which meet specific criteria are deployed to specific channels.

Every project has a default channel.

Channels are managed from the Project overview page by selecting the specific project you are working with and clicking Channels.

As you add more channels, you'll notice that they are arranged in alphabetical order on the channels page.

Version rules assist in selecting the correct versions of packages for the Channel.  They are only used when creating a release, either manually or via Automatic Release Creation.

Version Rules will work best when you follow Semantic Versioning (SemVer 2.0.0) for your versioning strategy.

Following the standard 2.0.0 SemVer syntax, a pre-release tag is the alpha numeric text that can appear after the standard major.minor.patch pattern immediately following a hyphen. Providing a regex pattern for this field allows the channel to filter packages based on their tag in a very flexible manner. The SemVer build metadata will also be evaluated by the regex pattern. Some examples are.

If adding a pre-release tag to Channels, you will also need to add the tag ^$ to your default channel 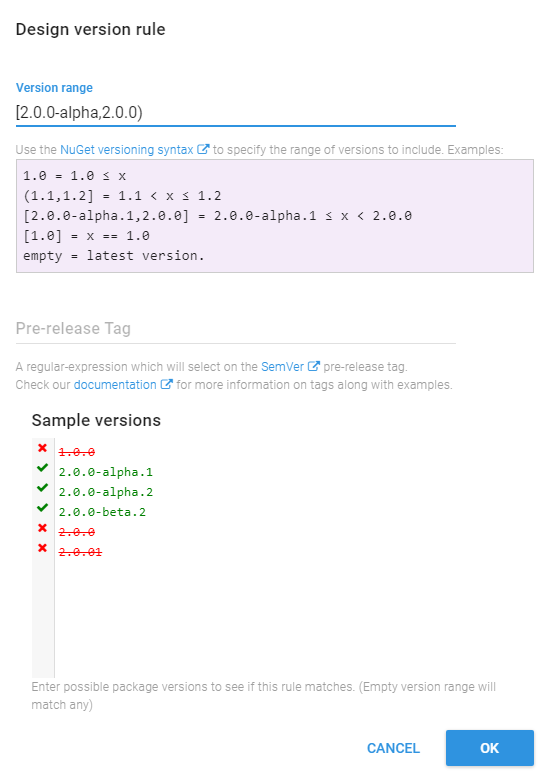 Once a project has more than one Channel, there a number of places they may be used.

Each Channel defines which Lifecycle to use when promoting Releases between Environments. You can choose a Lifecycle for each Channel, or use the default Lifecycle defined by the Project.

Deployment Steps can be restricted to only run on specific Channels. 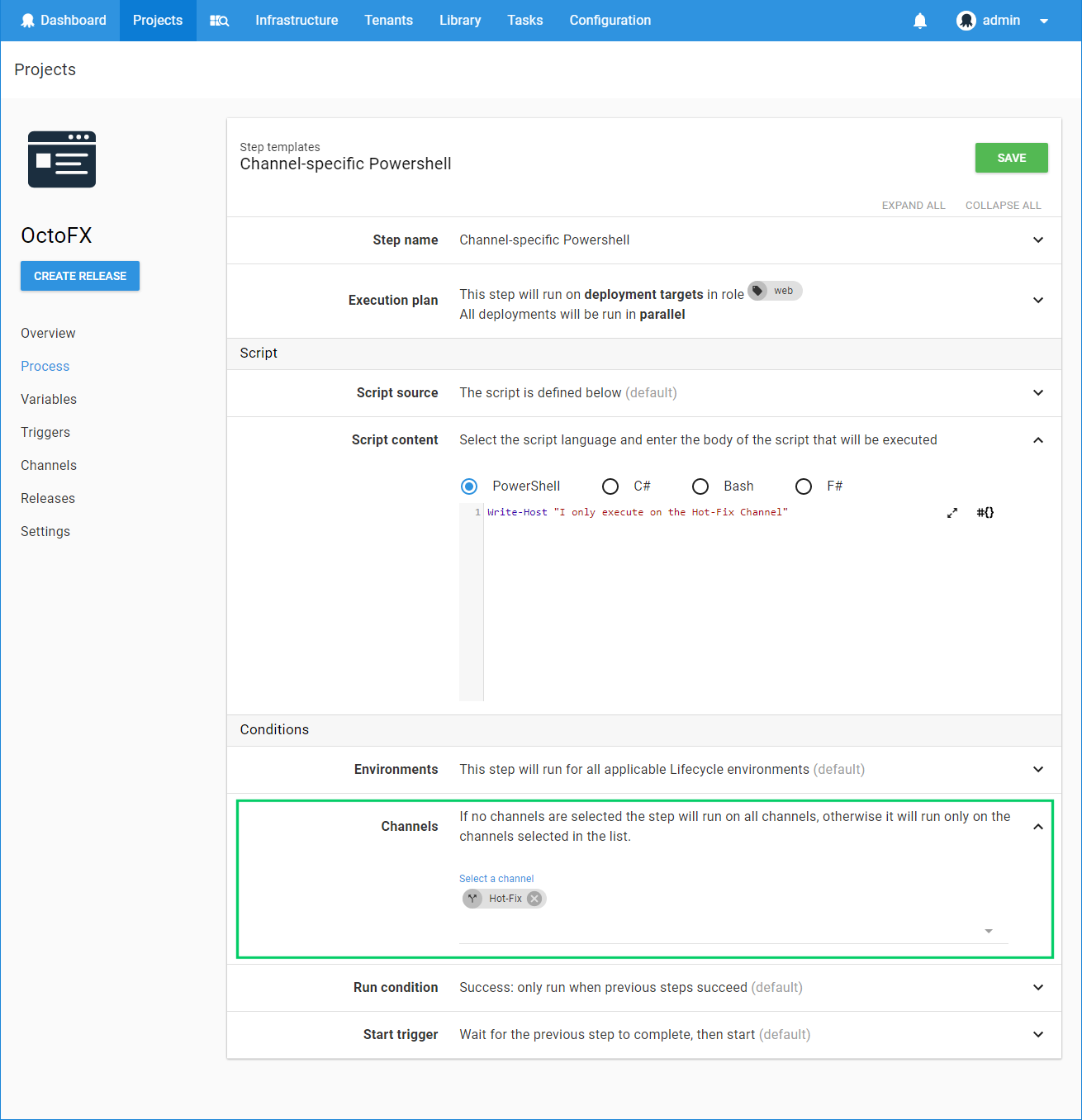 As you release software to different Channels, it's likely that some of the variables in those Channels will need to be different. Variables can be scoped to specific Channels. 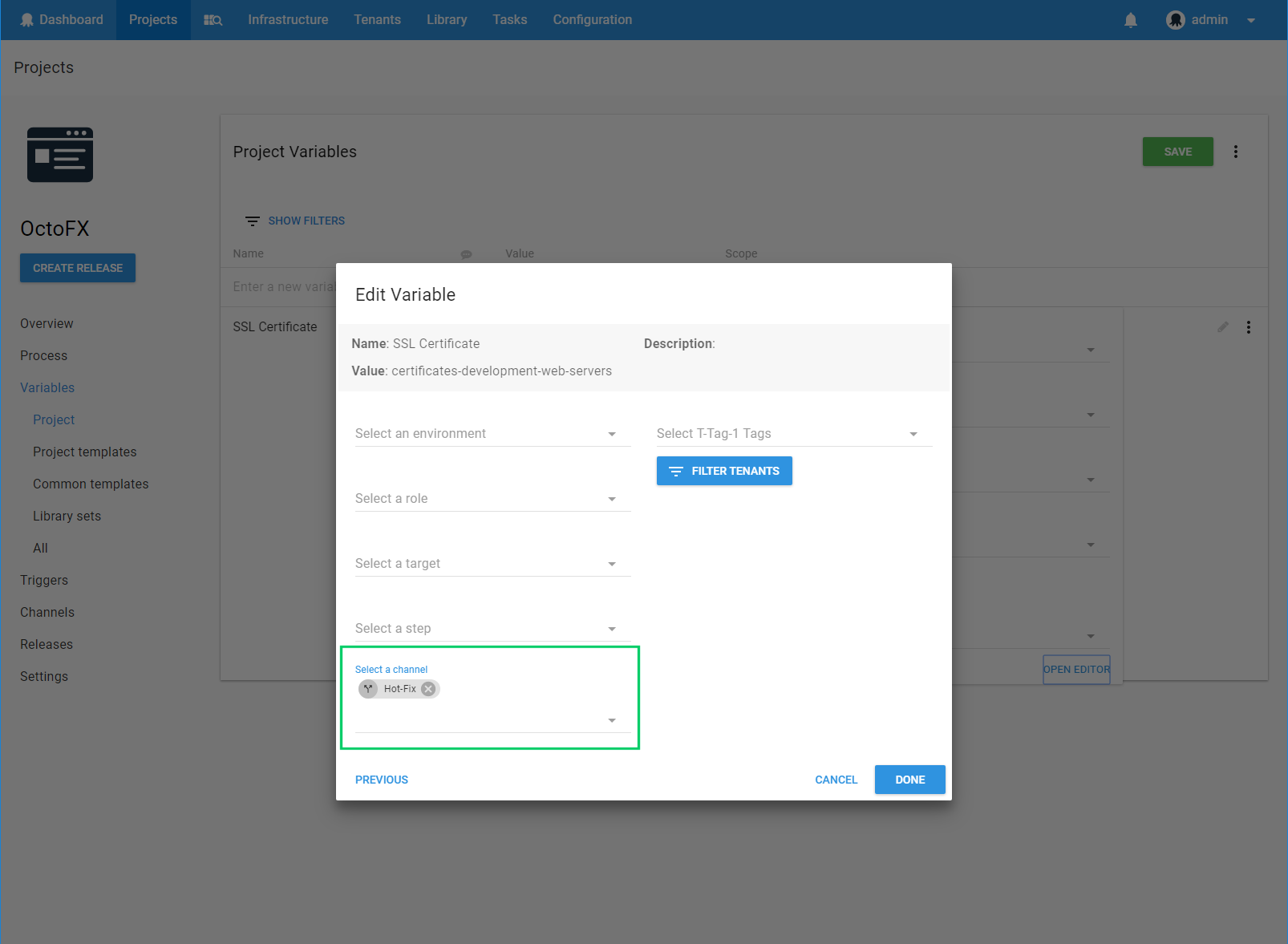 You can control which Releases will be deployed to certain Tenants using Channels. In this example, Releases in this Channel will only be deployed to Tenants tagged with Early access program/2.x Beta.

When you are creating a release, you can select a channel. 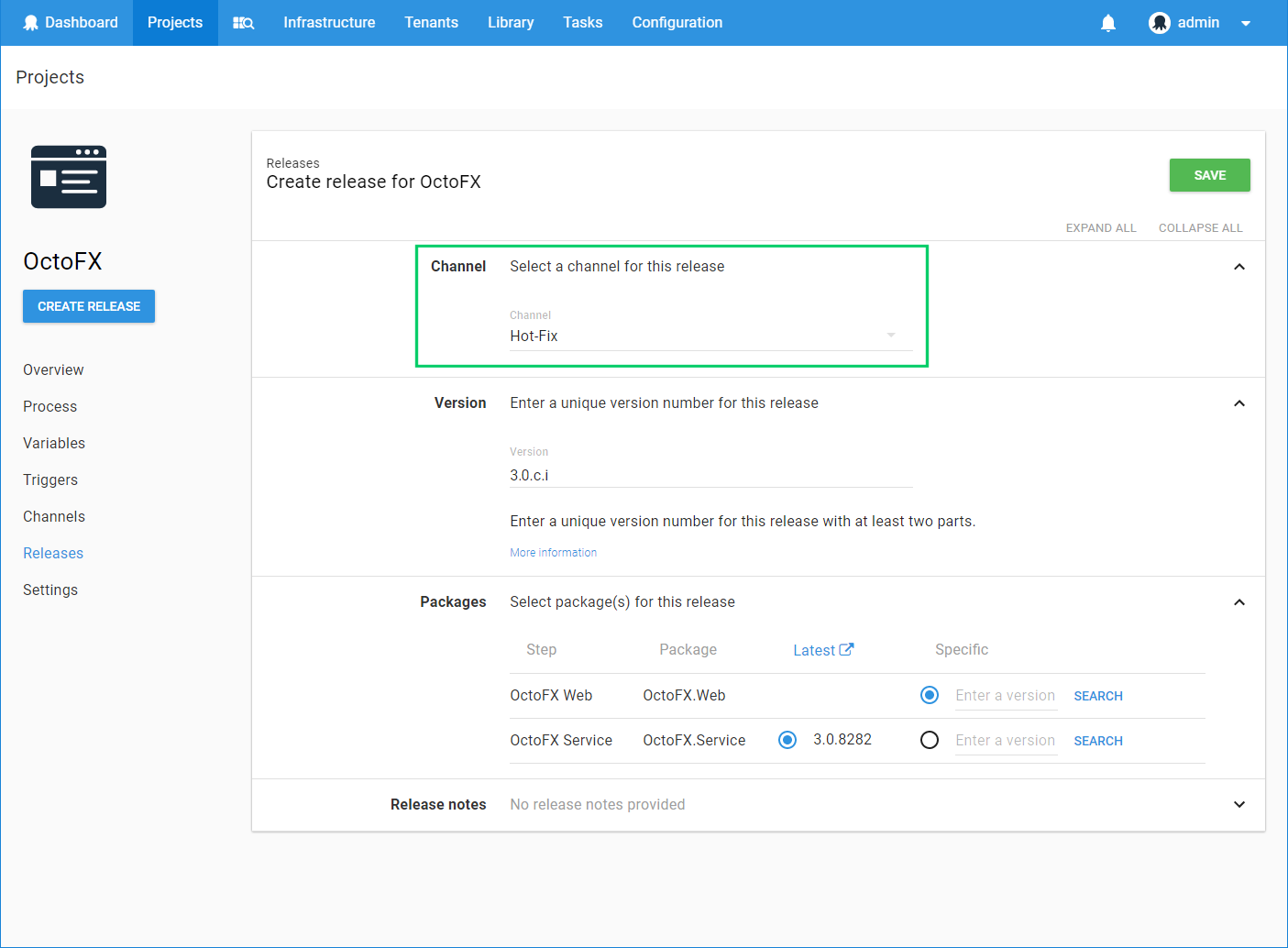 Selecting the channel will cause the release to use the lifecycle associated with the channel (or the project default, if the channel does not have a lifecycle).  It will also cause the deployment process and variables to be modified as specified above.

When using one of the build server extensions or the Octopus CLI to create releases, you can either let Octopus automatically choose the correct Channel for your Release (this is the default behavior), or choose a specific Channel yourself.

When enabling automatic release creation for your project, you are required to select a Channel (if the project has more than one). 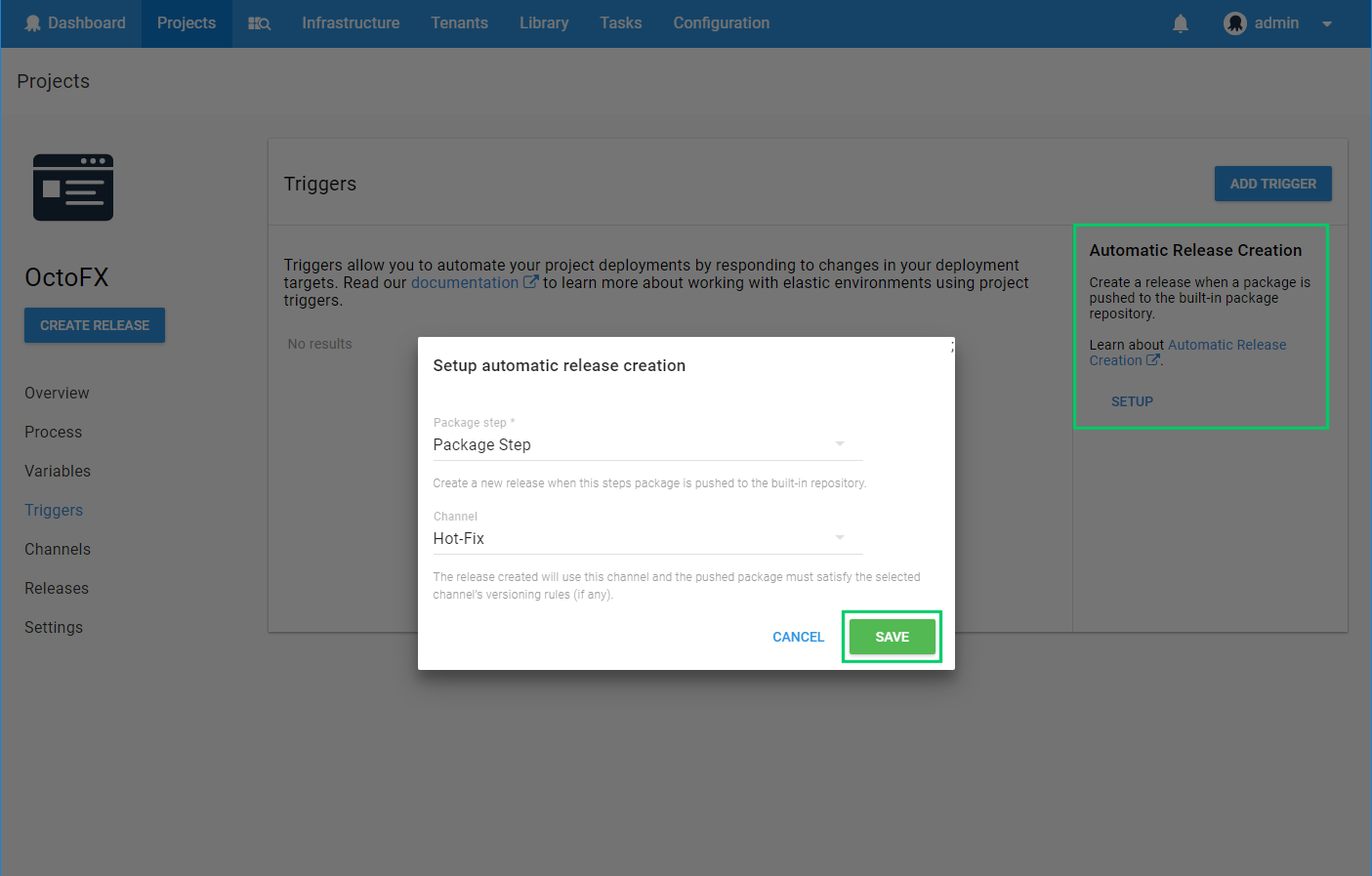 Any releases created automatically will use the configured channel. Additionally, any version rules configured for the channel will be used to decide whether a release is automatically created.

For example, if version 3.1.0 of a package Acme.Web is pushed to the Octopus internal NuGet repository, and the channel selected for automatic release creation has a version rule range that doesn't include 3.1.0, then no release will be created.

The scenarios channels are used to model can be split into two categories. In the first, the channel controls the way releases are deployed (different lifecycles, deployment steps, etc), but the deployed releases should not be treated differently. An example of this would be a Hotfix channel, used to select a lifecycle designed to releases to production quickly.

In the second mode of use, releases deployed via different channels are different, and should be treated as such. As an example of this, imagine a company that makes a deployment tool available as both a downloadable self-hosted product and a cloud-hosted software-as-a-service product. In this example, the self-hosted and cloud channels not only select different lifecycles and deployment steps, but it is also desirable to view them as individual versions on the dashboard.

In Project ➜ Settings there is an option named Discrete Channel Releases, designed to model this scenario. 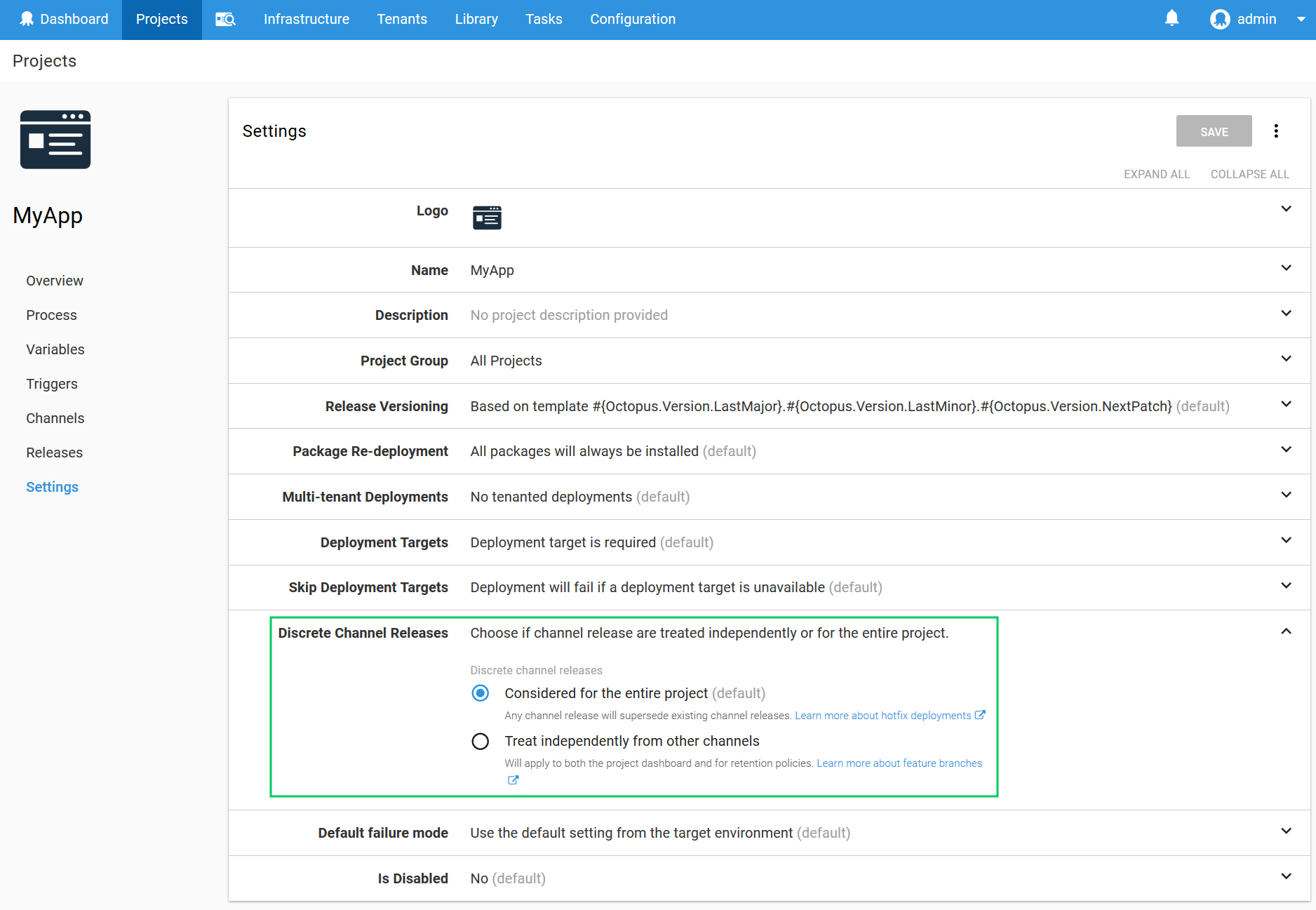 Setting this to Treat independently from other channels will cause:

The image below shows an example dashboard with discrete channel release enabled: 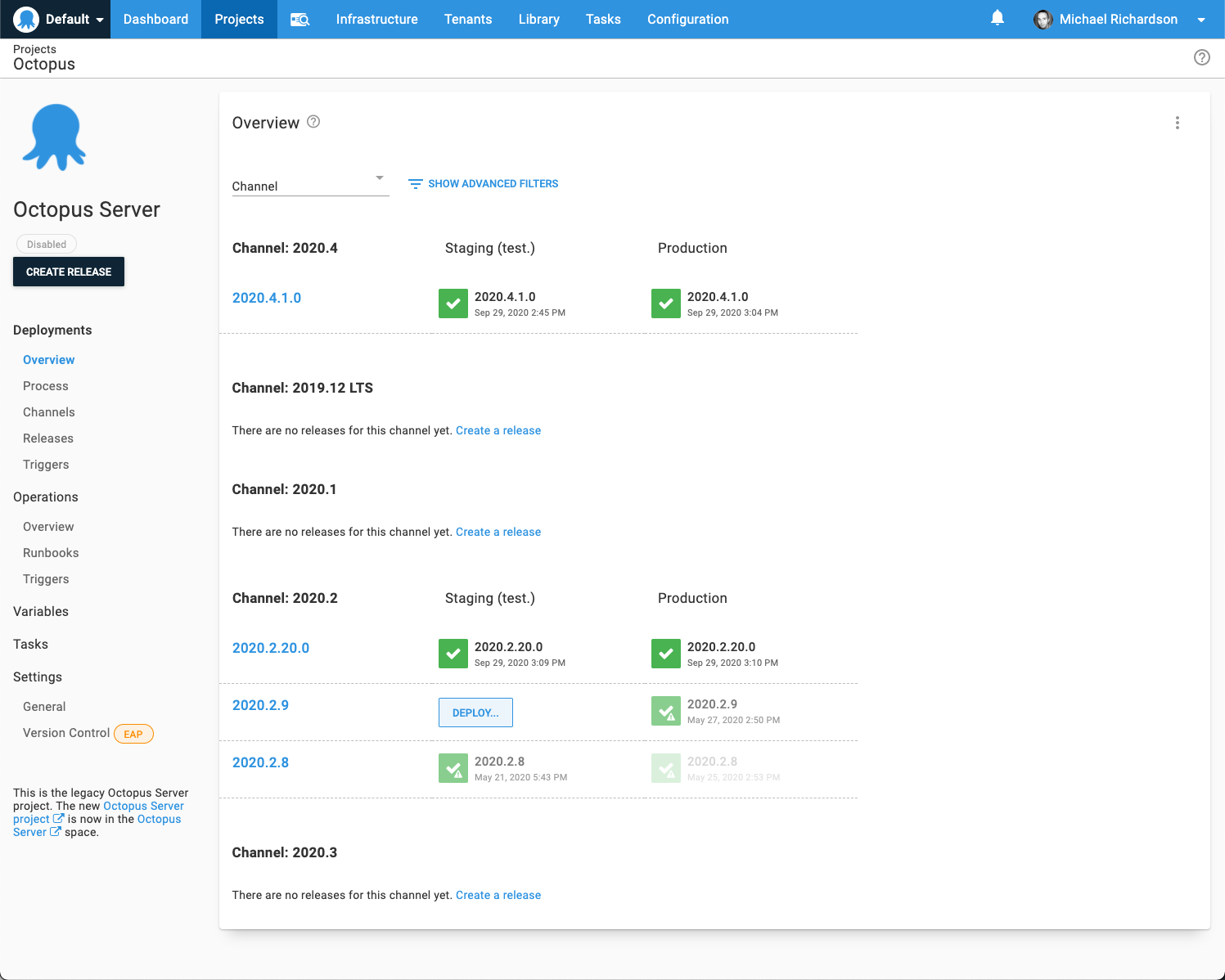