The metrics are calculated in real time based on deployment completions.

The deployment frequency is the total number of successful deployments for a given time period.

The lead time for a given deployment is the time from the deployment's completion date, back to the creation date of the earliest release whose changes have not been deployed to the given environment. Calculating lead time can be straightforward in many scenarios, like the following example: 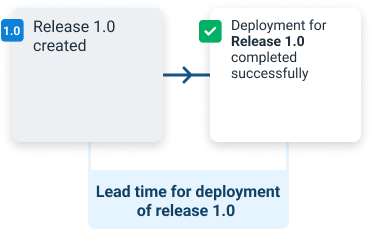 Here, the lead time is the time from Release 1.0’s creation to the completion time of its deployment.

Lead times may be calculated across environments. In the example below, release 1.3 is never deployed to production due to a bug being found in testing. Because of this, the lead times for release 1.4 start at the creation time of release 1.3.

Failure rate is calculated by taking the total number of deployments, and dividing them by the number of failures as a percentage.

This chart shows the simplest example of the time to recovery, where a failed deployment is successfully redeployed straight afterward.