Worker Tools are a set of docker images used as execution containers for workers to run deployment processes. Worker Tools include a wide range of software tools to support most deployment scenarios out of the box. This page focuses on how we create these Worker Tool images, version, cache on workers, and release them.

Worker Tool images follow a semantic versioning (SemVer) approach of Major.Minor.Patch-Distro for their tag format. When we release a new version of Worker Tools to the Worker Tools Docker Hub repository, we also add the following image tags, distribution (ubuntu.18.04 or windows.ltsc2019), Major-Distro (e.g. 3-Distro) and Major.Minor-Distro (3.3-Distro). We recommend using the fully qualified SemVer as patch updates of Worker Tools could result in an updated tool dependency introducing a breaking change.

The Worker Tools Dockerfiles use a combination of tools pinned to specific versions, such as CLI tools and Frameworks, while other tools pull their latest available release. For Ubuntu, these are pulled with apt-get, and for Windows, chocolatey. You can find the full details of these tools in the docker files for Windows and Ubuntu Worker Tools.

For Windows these include chocolatey and dotnet core 3.1.*.

If your steps depend on any of these packages, we recommend you target the fully qualified SemVer of Worker Tools. Otherwise, our additional Worker Tools tags may be suitable for your use case. We version our releases as follows:

To understand this cache, it's important to understand a worker's life cycle. Workers are acquired from a dynamic worker pool and leased to a single cloud instance. They are allocated in a round robin fashion to individual deployment steps, storing packages, docker images, and other data on disk. Workers are destroyed after either the worker has been idle for 60 minutes or has existed for 72 hours (3 days). 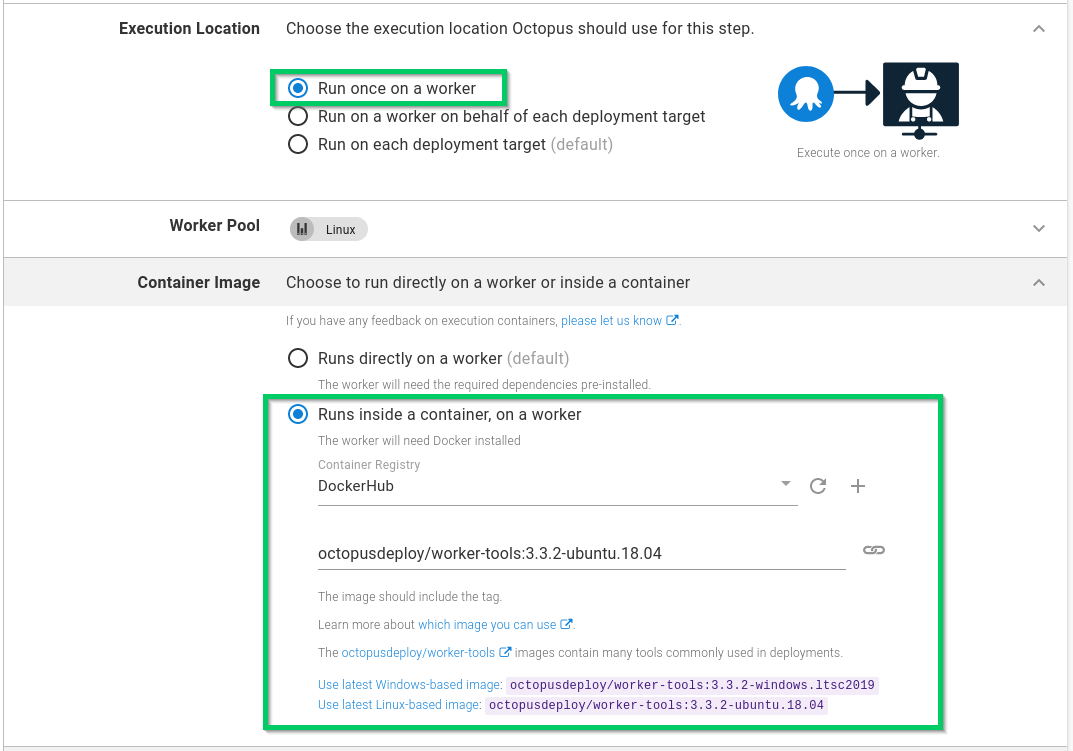 Using non-cached versions of these worker-tools can result in long downloads.