GitHub exposes a set of APIs that allow Octopus to treat it as a feed of packages. In this scenario an Octopus package maps to a specific GitHub repository (e.g the https://github.com/OctopusDeploy/Calamari repository is referred to in Octopus as OctopusDeploy/Calamari). Git tags are used to denote package versions. Tags that can be parsed as SemVer 2.0 can be treated as candidates for an Octopus Deploy release. If a tag is also linked to a specific GitHub Release, then those release notes will be treated as the release notes for the package.

When searching for a package, either through the package selector on a deployment step, or when testing a feed, the package naming scheme allows for several different ways to search through the GitHub repositories.

Only the following authentication methods are supported.

If you’re attempting to configure access for your organization, and you would prefer not to use the auth token from a particular user, you can create what GitHub refers to as a Machine User. This is effectively a GitHub account configured exclusively for automation.

Create a GitHub package feed through Library ➜ External Feeds. You can add as many GitHub feeds as you need. Each can have different credentials if required.

In most cases the FeedUri that you will need to provide is the standard public GitHub endpoint https://api.github.com. You would only need to provide a different url if you have self hosted GitHub Enterprise (in which case you would provide https://my-github-repo.com/api/v3) or if you access GitHub via a proxy.

For authorization, it is recommended that you create a Personal access tokens for your account and use this token as the password. Tokens can be created for your GitHub account by logging in to GitHub and navigating to Settings ➜ Developer Settings ➜ Personal Access Tokens and click Generate new token. 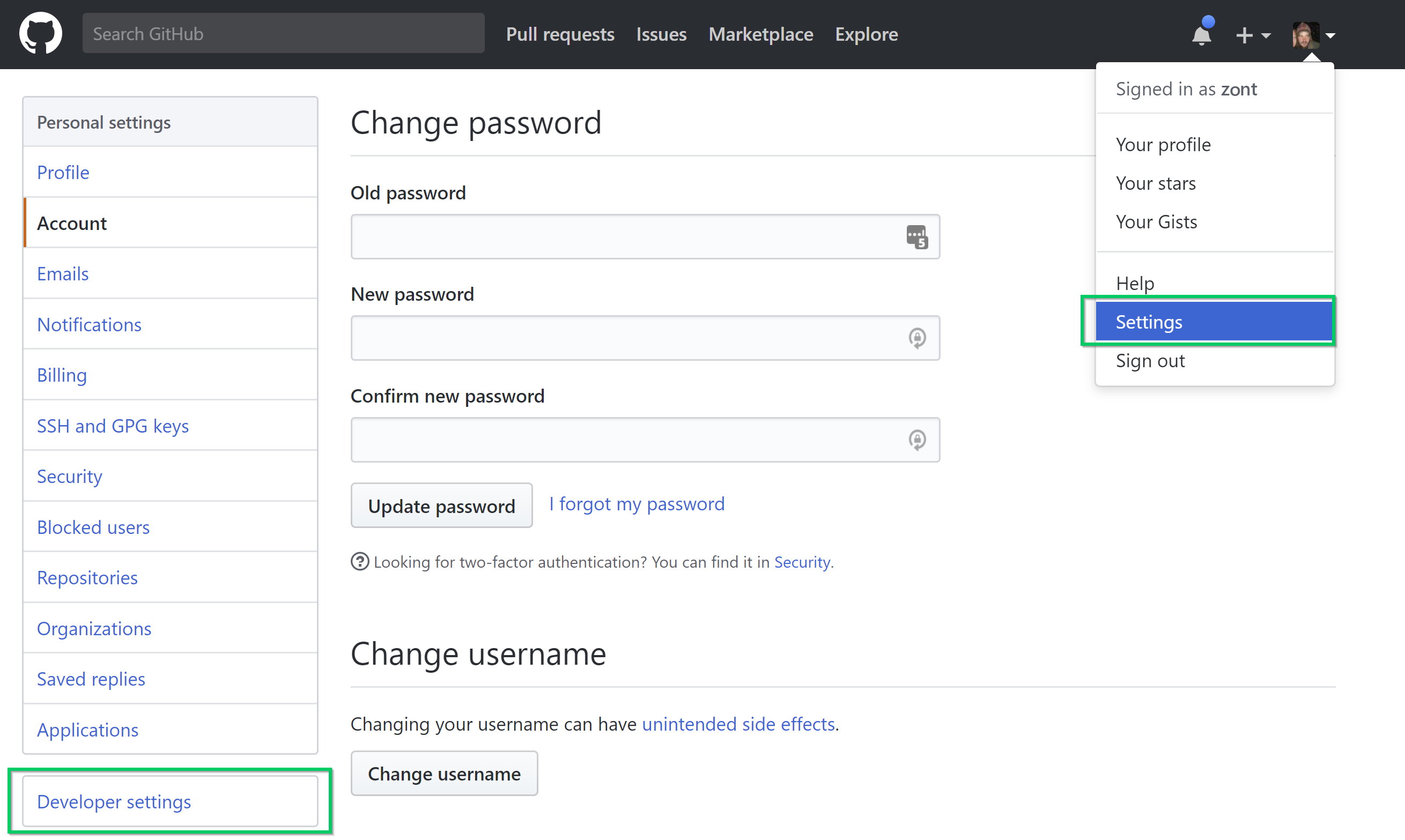 Give the token a meaningful name and enable the repo scope if you want to be able to access private repositories from Octopus Deploy.

Copy the token that is generated and use this value as the password for the GitHub feed in Octopus Deploy.

You can check whether the GitHub feed is working by searching for packages. Click the TEST button, and you'll be taken to the test page:

Note: When testing a GitHub Feed, the Version field will not be displayed. This is due to the way Octopus queries the GitHub repository search API which doesn't return release tags. This was an intentional decision implemented for performance reasons.

Using GitHub as a package feed 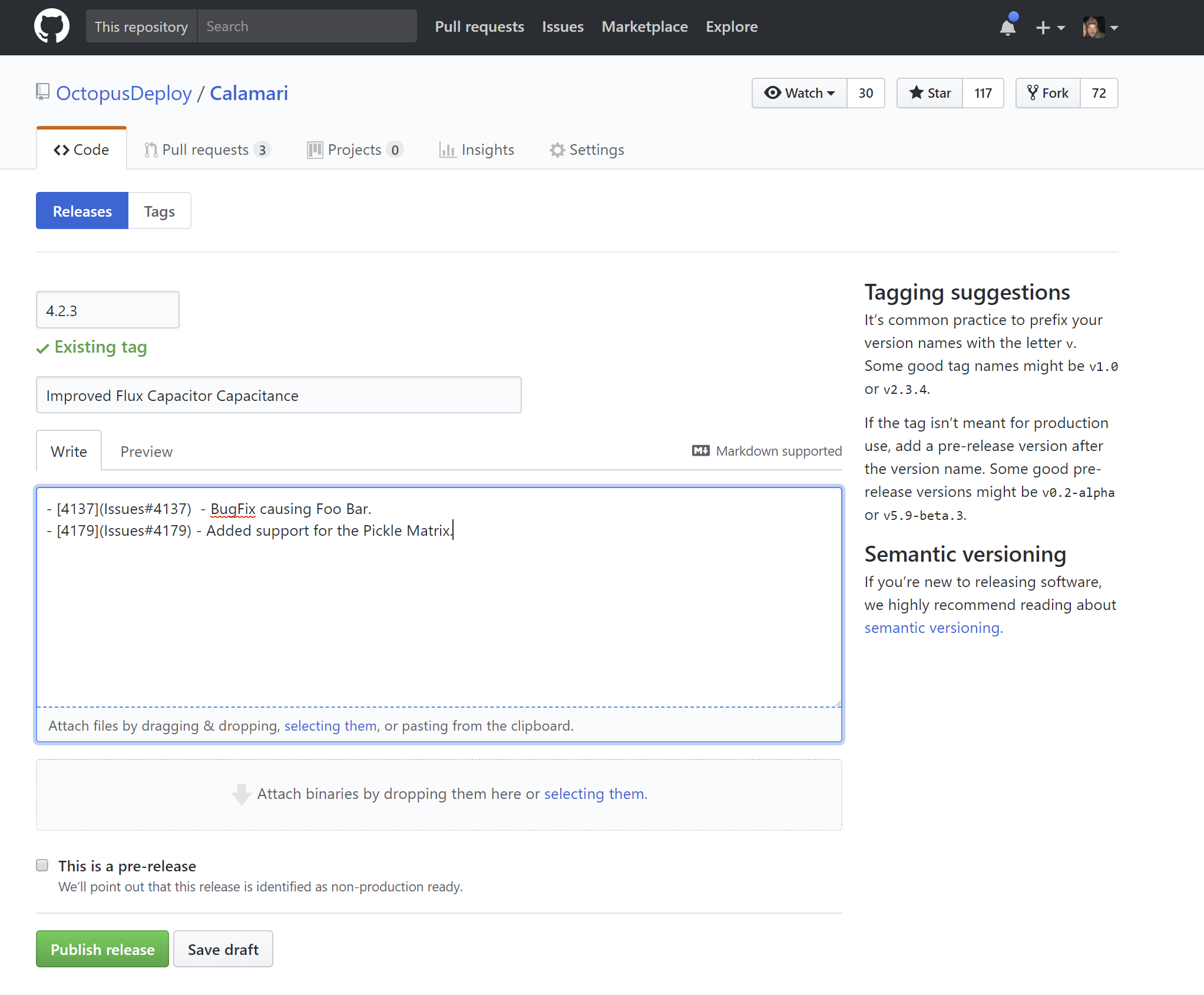 If Octopus can link a particular version (which in the context of GitHub feeds refers to a tag) to a release, then the release notes will be exposed through the Octopus Deploy portal. At this point in time the This is a pre-release check-box on the GitHub Release will be ignored in favor of the pre-release state indicated in the version itself. Additionally, artifacts are not currently retrieved as part of an Octopus deployment, however this may become available in the future. 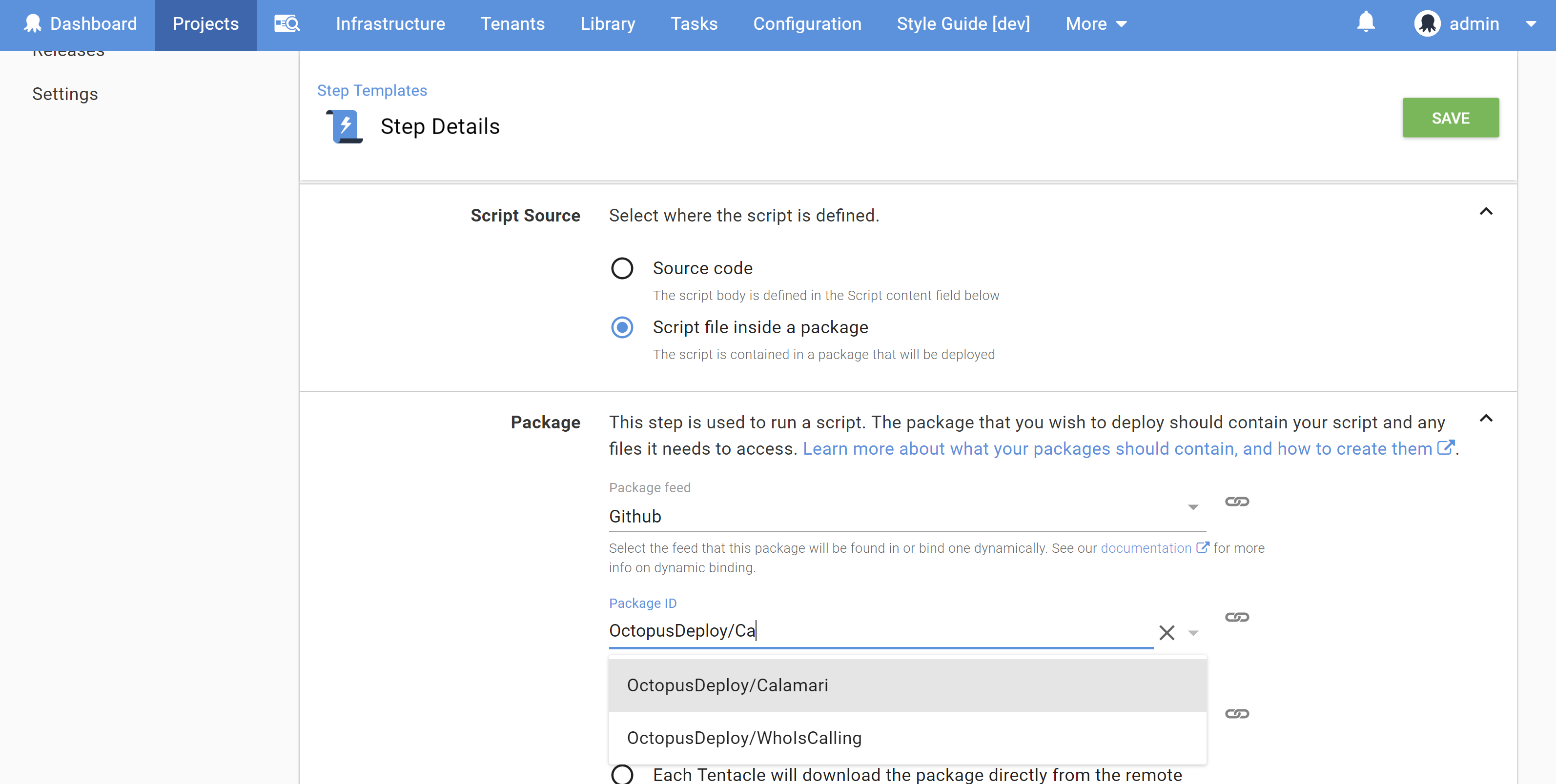 Deployments without a build

This new GitHub feed support is a perfect addition to support your CI processes where a build process to create a package would be unnecessary. It could be a repository that contains just a bunch of scripts or cloud provisioning templates that you want Octopus to execute but that you would prefer to be in source control and where a build process makes no sense. Perhaps you have a simple Node.js project that you just want to deploy directly from your source control without the ceremony of a build and package step. In this case you may want to invoke npm install in a post-deploy script.