Octopus Deploy provides the most value when it is used by your whole team. Developers and testers might be allowed to deploy specific projects to pre-production environments, but not production environments. Stakeholders might be permitted to view certain projects, but not modify or deploy them. To support these scenarios, Octopus supports a permissions system based around the concept of Teams.

You can manage users and teams in the Octopus Web Portal: 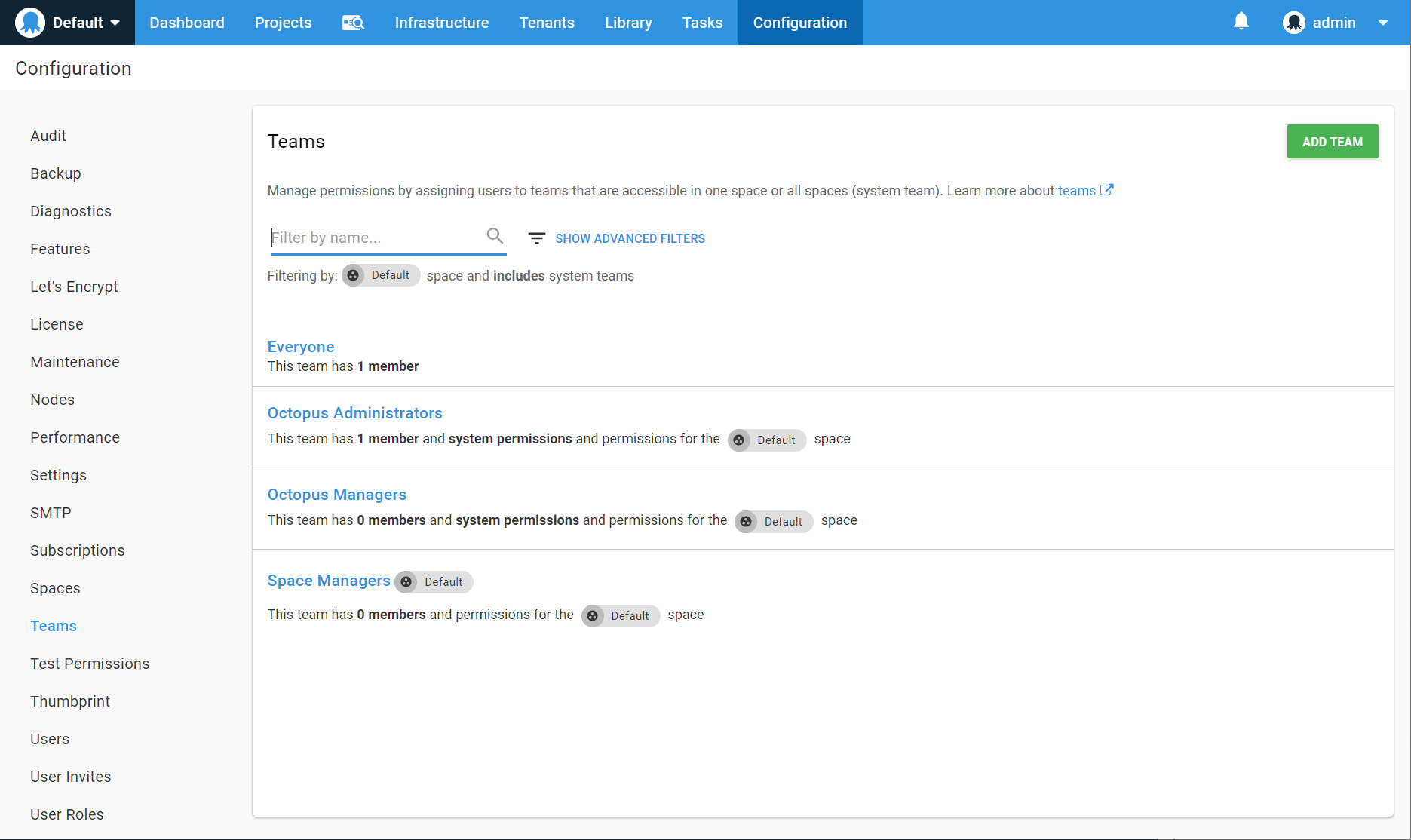 User accounts are allowed to use both the Octopus Web Portal and the Octopus API, and can authenticate with a username and password, Active Directory credentials, or an Octopus API key.

Service accounts are API-only accounts that should be used for automated services that integrate with Octopus Deploy, and can only authenticate with an Octopus API key. For more information refer to Service accounts.

This feature is being deprecated for Cloud users. You can follow these instructions to invite users to your Octopus Cloud instance.

To streamline the process of adding multiple users you can use the User invites feature to generate one or more unique registration codes bound to one or more existing teams. These links can then be issued to users so that they can register their own details and be given automatic permissions for the team(s) the codes are bound to. 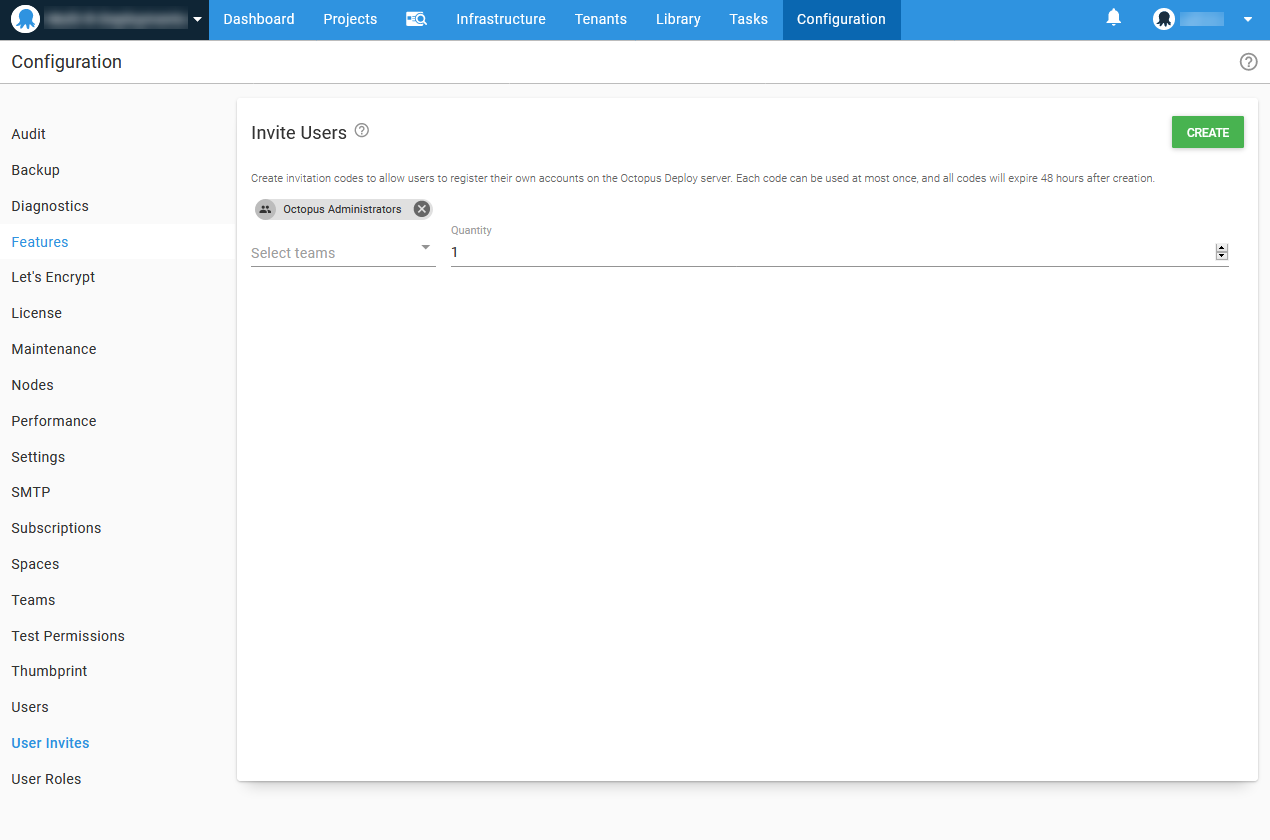 Prior to version 4.0 this feature was accessed via the Invite users button on the Users page

In the example above, we are generating codes for the Octopus Administrators team, so anyone who uses one of the codes will automatically join that team when they have completed registration.

Invite codes are only valid for 48-hours after being generated, so make sure you issue them quickly before the expire.

Creating teams lets you assign the same roles to groups of users. Users can be added to or removed from multiple teams, making it easier to manage permissions for specific users and teams. You can create new teams by using the Add Team button.

For example, we can create a team that gives Anne and Bob access to view projects and deploy them to pre-production environments by assigning the role Project deployer to the team. 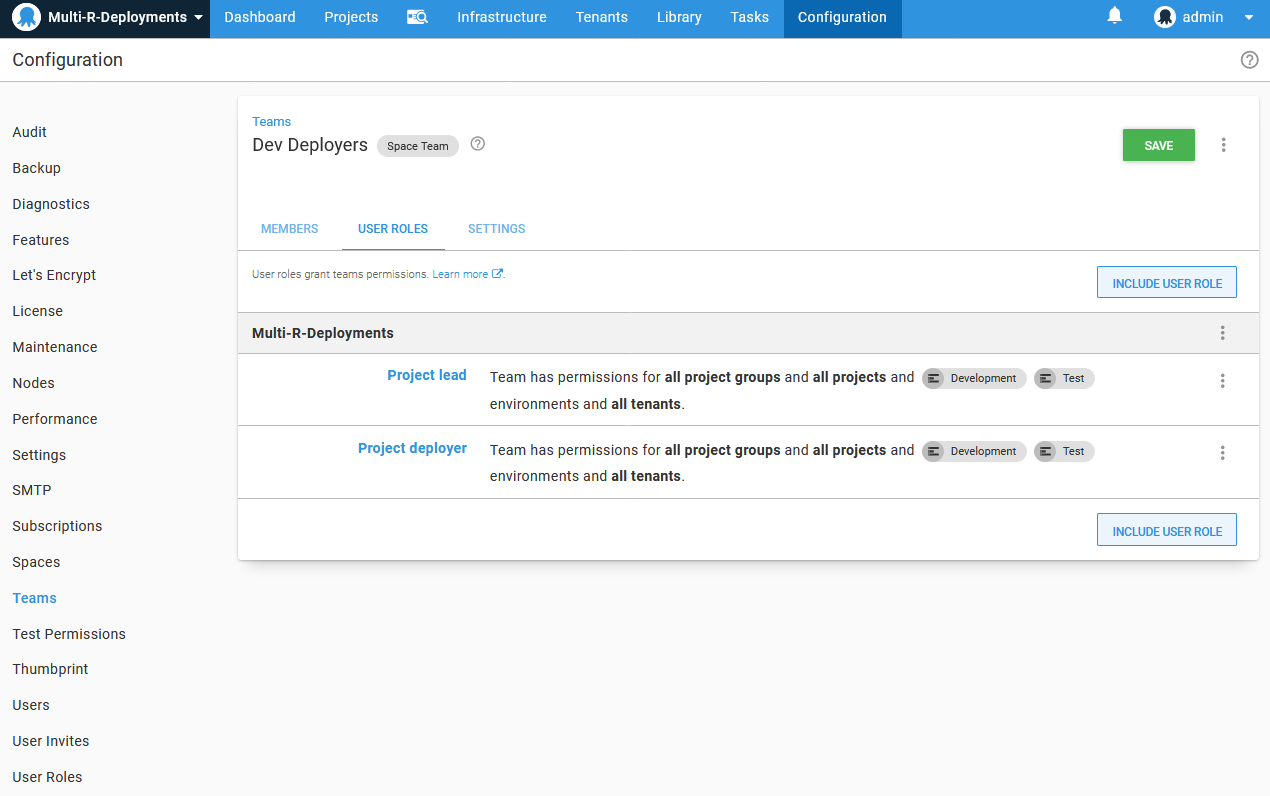 When specifying both Project Groups and Projects filters please be aware that both these filters complement each other. To better illustrate these filters in action let's consider the following project structure:

The following table illustrates the combination of possible permissions when specifying both Project Groups and Projects filters:

Team members can be assigned the following roles:

The roles assigned by a team can be scoped by project or environment.

You can learn more about User Roles in our documentation.

The Everyone team always contains all users, but you can assign different roles to members of this Team (for example, you might allow everyone to view all projects and environments, but not edit anything). Out of the box, Everyone members can do nothing.

The second team is Octopus Administrators. Members of this team have permission to configure system level concerns of Octopus. You can add or remove members from this team. We recommend only adding a few key users to this team.

The third team is Octopus Managers. That can manage a smaller subset of system-level functions reserved. You can also add or remove members from this team. We recommend adding users to this team who should be able to manage teams and other top-level things in Octopus, but not be able to change how Octopus is hosted.

The fourth team is Space Managers Members of this team can do everything in a given space. Out of the box the initial user added to Octopus Administrators is also added as a Space Manager. If you do not need granular access for what users need to do with Octopus relating to Projects, Tenants, Environments you can add them as Space Managers.