With Octopus Deploy, you can deploy software to Windows servers, Linux servers, Microsoft Azure, AWS, Kubernetes clusters, cloud regions, or an offline package drop. Regardless of where you're deploying your software, these machines and services are known as your deployment targets.

You can manage your deployment targets by navigating to Infrastructure ➜ Deployment Targets in the Octopus Web Portal: 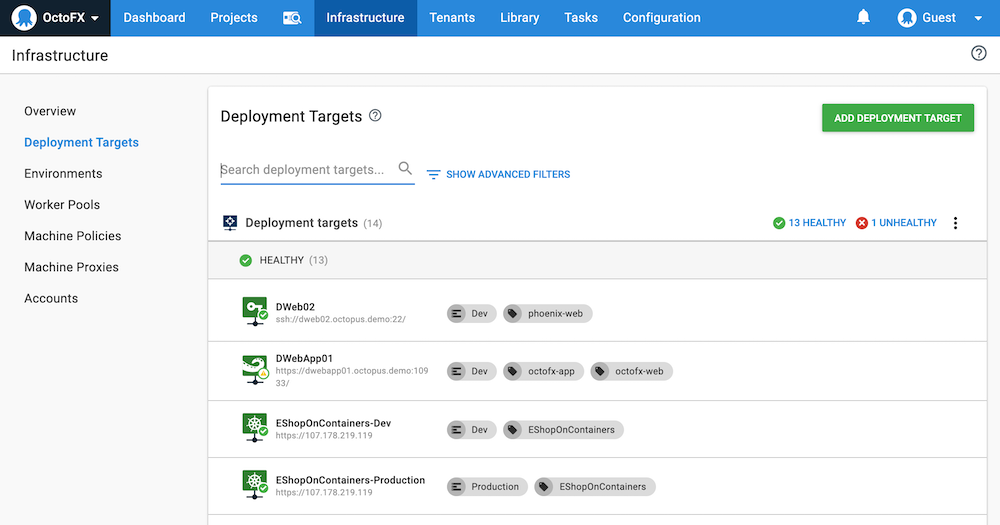 Deployment targets are added in different ways, depending on the type of target you are adding and how the target will communicate with the Octopus Server. For instructions, see:

In addition to the deployment targets above, you may also need to configure accounts to use in conjunction with your infrastructure during your deployments.

You can configure the following accounts:

Roles are created and saved in the database as soon as you assign them to a deployment target.

Decide on the naming convention you will use before creating your first target role as it's not possible to change the case after the role has been created, for instance, all lowercase to camel case.

You can check all the roles assigned to your deployment targets from the Infrastructure tab.

Learn about Managing resources with scripts.