Eventually, the server hosting Octopus Deploy or the .NET version installed will reach the end of life. From both a practical and security point of view, continuing to run Octopus Deploy on unsupported software is not recommended. But upgrades take time, from configuring to testing. And there is a risk of downtime.

If you have a Data Center or a Server license, it is possible to upgrade the host OS or .NET without downtime and with minimal risk. Those licenses support an unlimited number of high availability (HA) nodes. If you do not have HA configured, this is an excellent time to do it. There are numerous benefits, including horizontal scaling, a more robust CI/CD pipeline, and low friction maintenance.

Once high availability is configured, the process to upgrade the host OS will be:

The new node is now part of the HA cluster, but it isn't part of the load balancer, so it doesn't accept UI requests or processing tasks. At this point, you can slowly bring this new node online.

Test the Octopus UI on the new node

The first step is to test the Octopus UI to make sure it is responding correctly. To do that, you can follow this process. It is meant to take a little bit of time to reduce risk. If at any point something isn't working, contact support@octopus.com.

Have the new node process tasks

Wait a few days or weeks. If no oddities come up, go through the decommissioning process of the old nodes.

Configuring High Availability can take time. Or you might be on a license which doesn't support HA. The other option is to clone the instance and migrate over.

Creating a clone of an existing instance involves:

If anything goes wrong, stop the cloned instance, and start the old instance back up.

Migrating data from Octopus to a test instance requires both the main instance and test instance to be on the same version. You can find the version you are running by clicking on your name in the top right corner of your Octopus Deploy instance.

Run the MSI you downloaded to install Octopus Deploy. Once the MSI is finished, the Octopus Manager will automatically launch. Follow the wizard, and on the section where you configure the database, select the pre-existing database. 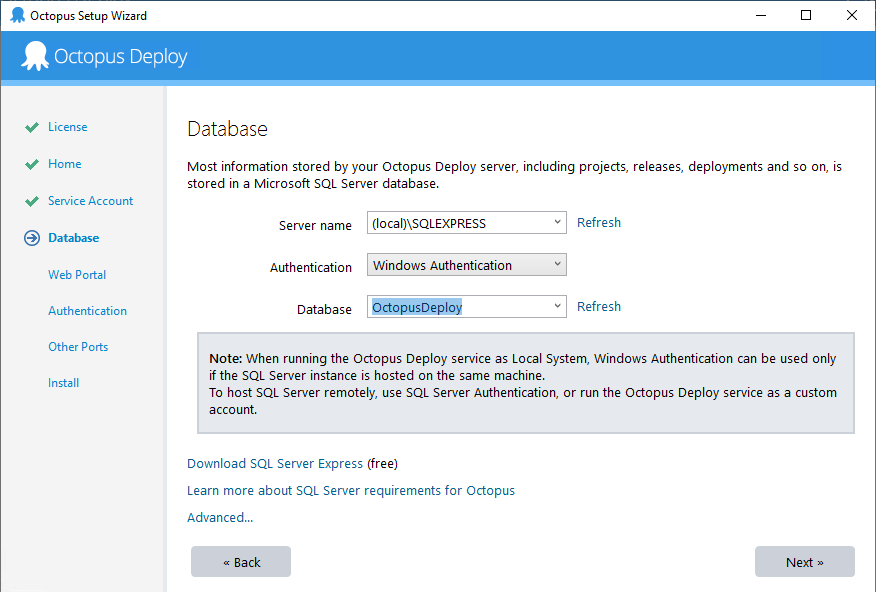 Selecting an existing database will ask you to enter the Master Key. 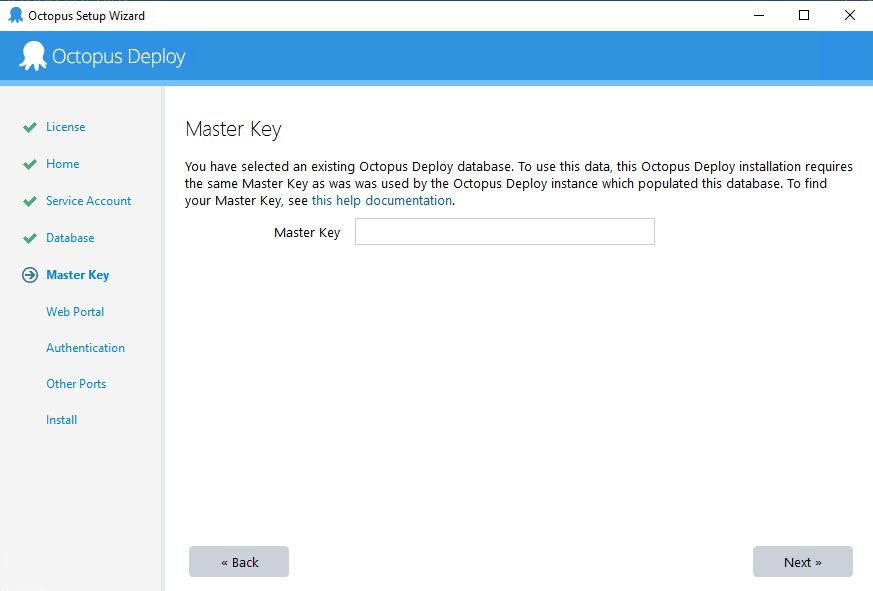 Enter the Master Key you backed up earlier, and the manager will verify the connection works.

Copy all the files from the main instance

After the instance has been created, copy all the contents from the following folders.

Failure to copy over files will result in:

The server folders store large binary data outside of the database. By default, the location is C:\Octopus. If you have High Availability configured, they will likely be stored on a NAS or some other file share.

Any standard file-backup tool will work, even RoboCopy. Very rarely will an upgrade change these folders. The release notes will indicate if these folders are going to be modified.

Migrating over to a new instance

All the sensitive variables, certificates, and other items required to connect to your deployment targets are stored in the database. Assuming you are not using polling Tentacles (or if you are, the DNS name hasn't changed), everything should work out of the box. Start running some tests on the new instance to make sure the new host OS or .NET version hasn't broken anything.

As you migrate your instance, here are few items to consider.

Each polling Tentacle will need to be cloned on each deployment target. To make things easier, we have provided this script to help clone a Tentacle instance. That script will look at the source instance, determine the roles, environments, and tenants, then create a cloned Tentacle and register that cloned Tentacle with your cloned instance.

Any script that clones a Tentacle instance must be run on the deployment target. It cannot be run on your development machine.