Octopus supports variables so that your deployment processes and runbooks can be parameterized. This allows your processes to work across your infrastructure without having to hard-code or manually update configuration settings that differ across environments, deployment targets, channels, or tenants.

You can manage the variables for your projects, by navigating to your project in the Project tab of the Octopus Web Portal and selecting Variables: 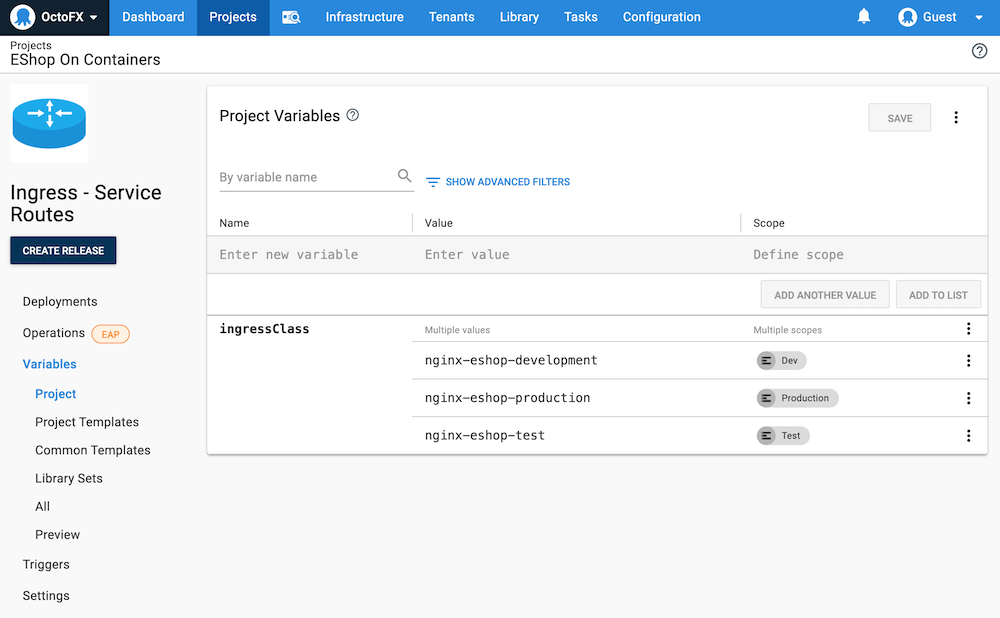 In this example, we'll add a variable to a Hello World project that runs a script to say hello. The project uses the variable to vary the message it displays based on the environment the script is deployed to. 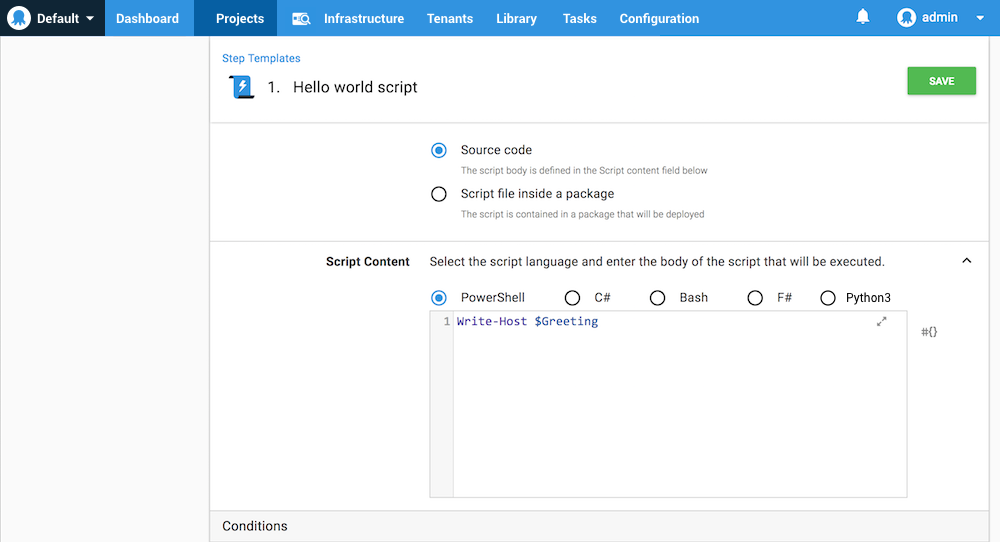 The variables that you define for your projects in Octopus can be scoped in the following ways:

Scoping the values of your variables lets you determine which values will be used in which situations. For example, suppose this variable exists:

During deployment, Octopus will try to select the most specifically scoped variable that applies. For example, when deploying to Production and Staging, the LogLevel value will be Warn, but to any other environment, it will fall back to the less-specific variable and have a value of Info instead.

You can scope the values of your variables in multiple ways. For instance, you might scope a value to both the Dev and Test Environments, and to a step within your process.

When the process runs, Octopus will use the scoped value for the Dev OR Test environments, AND the steps the value was scoped to.

With the above MyVariable variable, the scoped and unscoped values will be implemented as follows:

Imagine you have one variable scoped to an environment (Production), and another scoped to a machine within the environment. Which value should Octopus choose?

Since variables can be scoped in many different ways, there needs to be a predictable, deterministic order in which they are resolved. The list below is the priority in which variable scopes take precedence. The top items are higher priority than the bottom ones:

If two variables are scoped equally, Octopus will choose project-defined variables ahead of library-defined ones. If this still does not resolve the conflict the result is non-deterministic and you should not depend on a specific value being used. Instead, you should take care when scoping variables so that they are unlikely to conflict.

Scopes of the same type can generally be thought of as a grouping of logical OR expressions while scopes of different types evaluate as AND expressions between the groups of scopes. As an example, a variable scoped to the Development environment, Production environment as well as the Default channel would evaluate as (Development OR Production) AND (Default). This example results in a specific scope which requires a channel in order for the variable to evaluate. This means that the variable will not be usable in the context of a runbook as channels do not apply in this context.

There are two distinct scoping scenarios which need to be explicitly called out, one of which we encountered above, these are:

Mutually exclusive scopings can generally be avoided by duplicating variable values and scoping appropriately for each value if needed.

Variables can also be scoped to specific target roles. This means that the variable will take the specified value only when it is used on a deployment step that runs on a deployment target with the specified role. This feature can be really handy when you want to use the same variable name multiple times and have their values changed depending on the target they are running on.

Let’s say you have the following targets with their respective roles:

You want to deploy the same package on each server but the deployment path will be different between servers. In this case you can set the same variable (we’ll call it DeployPath) with a different value for each target role:

Then, on your deployment step, you can set the Custom Install Directory to #{DeployPath}. 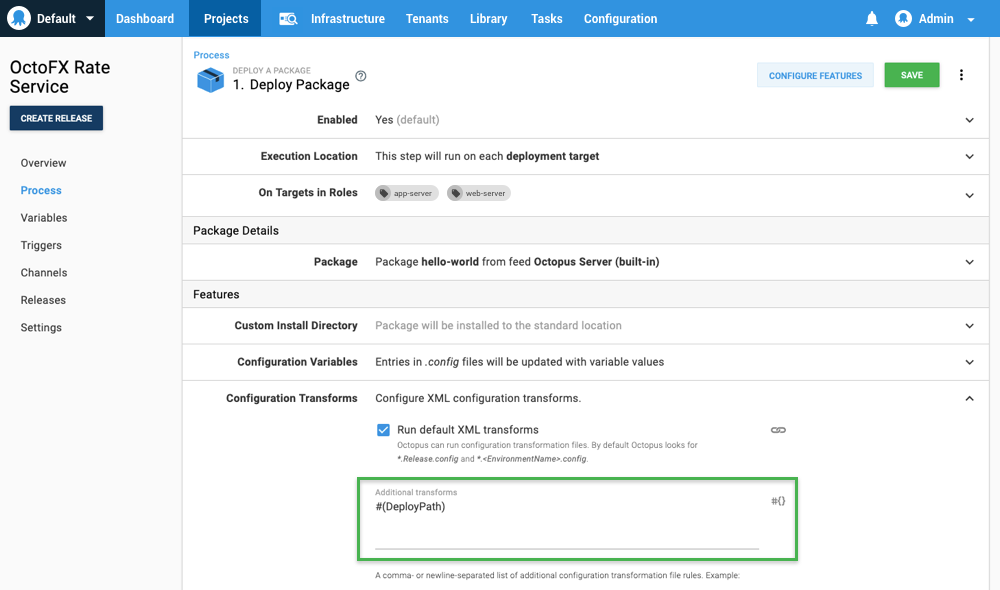 When applying permissions on variables via scopes, the only options that are checked against permissions are Environments, Targets and Tenants.

It's important to understand how Octopus treats variables with regard to case sensitivity:

If you are using the Structured configuration variables feature, variable names are matched in a case insensitive way.

Variables sometimes naturally fit into groups, and often you'll find multiple applications will use these groups. Octopus has Variable Sets; allowing you to group variables into a reusable set so that they can be used by other projects.

We recommend namespacing your variables to make identifying their use clearer. Examples of how this can work are:

If you have many configuration settings for your application and are using a variable for each value, it's possible that Octopus may not be the best place for those values. Consider:

If the answer to either of those questions is yes, it might be worth considering an external store for your variables; a source control repository, a configuration management system, or a database.