The Configuration as Code (config-as-code) feature adds support for configuring Octopus projects to store project resources in a Git repository. For now, only the deployment process and some deployment settings can be version-controlled.

It was important to us that the Octopus UI remain fully functional for version-controlled projects, and it has. You can continue to use the UI exactly as you always have, but with an additional super-power: Git branches are now exposed in the UI, allowing editing the deployment process on any branch via the UI. If you type the name of a branch that doesn't exist in your repository, you'll see an option to create that branch. This option is available when committing changes to your deployment process too. 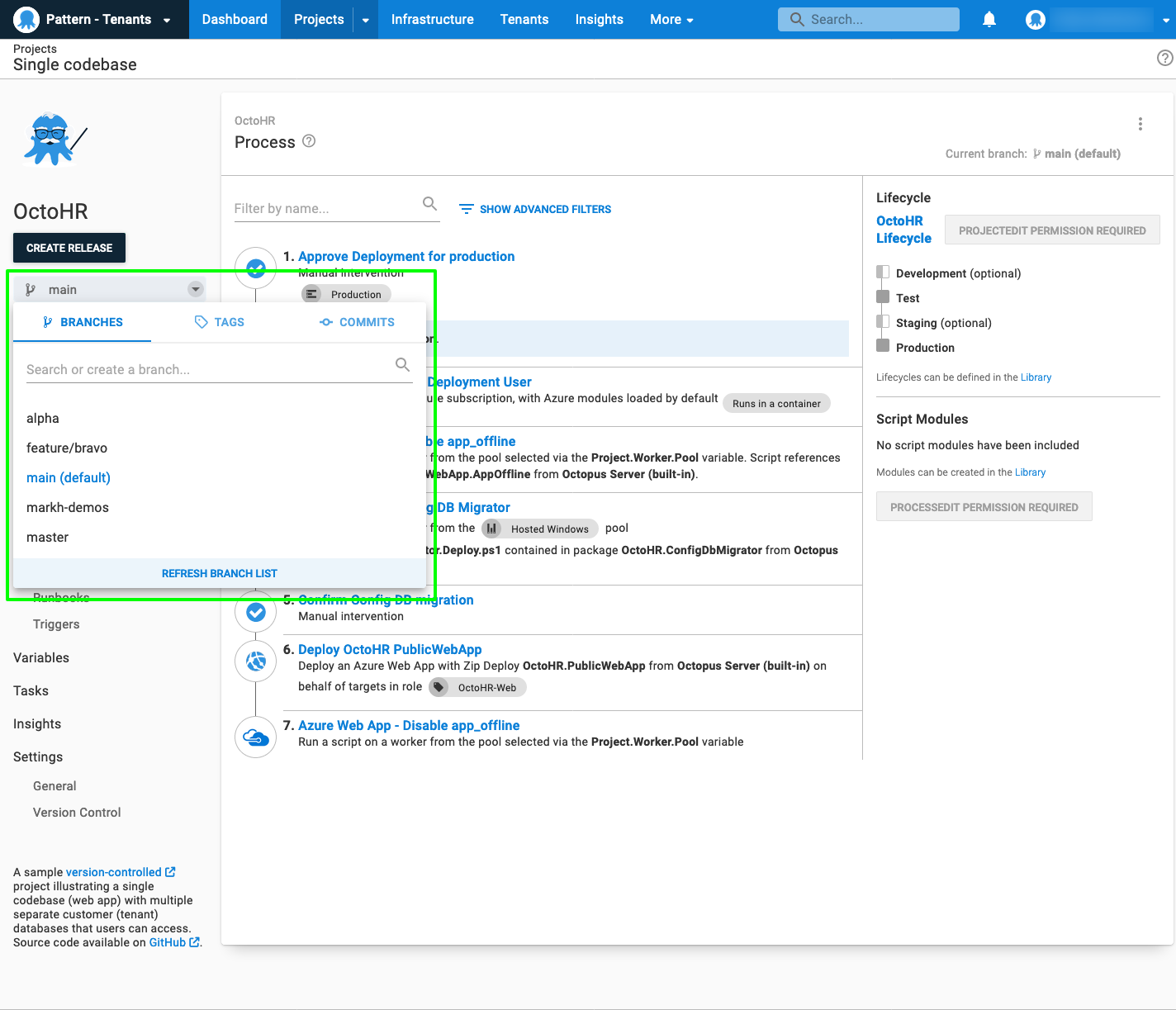 Of course, there is now a text representation of the process in the git repository, and if you prefer editing text, open your favorite editor and go for it. We refer to the text format as Octopus Configuration Language (OCL), and it is very much inspired by HCL.

That means that where previously there was only a single current version of the deployment process, it is now possible to have many. When creating releases, the relevant branch can be selected. We have also added branch system variables that can be used in your custom deployment scripts.

Config-as-code only supports git repositories. Before using this feature, you should be familiar with git concepts such as distributed version control, pushing, pulling, branching, merging, and fetching.

We have some strong opinions on what's next. The first release of config-as-code will only include the deployment process.

Our plans for future releases of config-as-code are to add support for:

In addition, we'd like to evolve the OCL schema to make it friendlier for editing by hand.

Our major goal for the early stages of this feature is to discover the ways people want config-as-code to evolve. What scenarios would you like to see unlocked? What doesn't work the way you hoped?

You can provide feedback through whichever of the following channels you feel most comfortable with:

Configuring a project to be version-controlled

Version-control is configured per project and is accessed via the Settings ➜ Version Control navigation menu item.

Learn more about Configuring version control on a project.

Several resources previously stored in SQL Server will now be stored in git once a project is version-controlled.

Making changes to a version-controlled project

Any changes to the deployment process or settings are made on a branch after a project is configured to be version-controlled.

Learn more about Editing a project with version control enabled.

Once an Octopus project is configured to be version-controlled, you can choose which branch to build from before creating a release in Octopus.

Learn more about creating and deploying releases in a version controlled project.

The Configuration as Code feature is designed to give you the benefits of source control, branching, reverting, and pull requests while being able to use your tool of choice to manage your processes (and eventually) variables. While it has many benefits, there are some unsuitable use cases and scenarios.