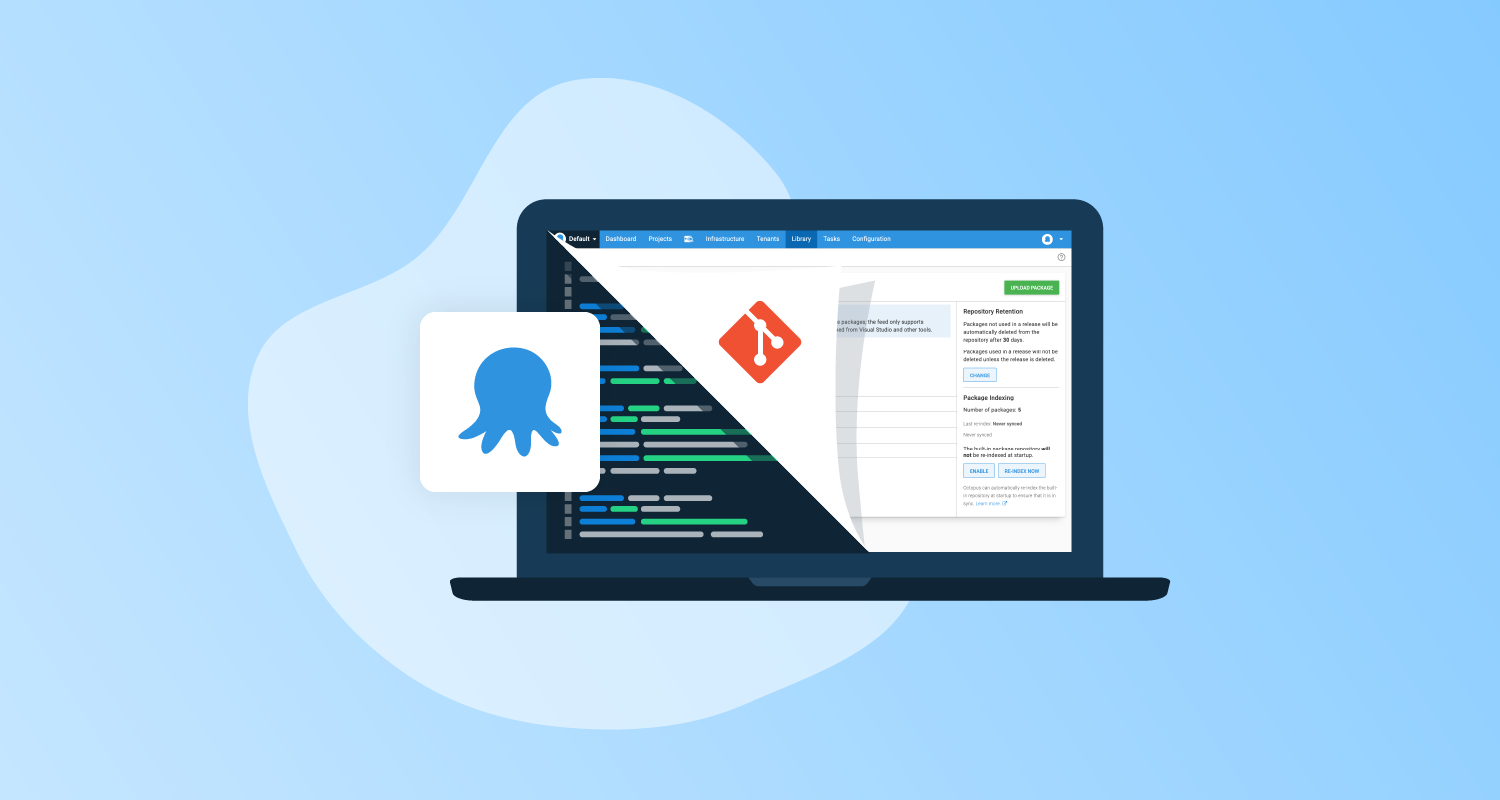 We’ve been busy recently building Configuration as Code (Config as Code) support for Octopus Deploy. In this post, we look at some of the factors that shaped this feature:

First, however, we should define what we mean by “Config as Code”. We're referring to a version-controlled (Git) text representation of an Octopus project. Today, when you configure a project in Octopus, the configuration is stored as records in a relational database. This feature takes some of that data and persists it as files in a Git repository rather than the database.

Why Config as Code?

Over the past few years, version-controlling Octopus configuration has comfortably been our most requested feature. We understand why. The benefits are compelling and include:

There are two highly voted UserVoice suggestions (1, 2), but even more convincing were the many customer conversations.

And finally, we want this! We use Octopus Deploy to deliver Octopus Deploy, and the first litmus test for a feature is whether we're excited about it. We are.

We're certainly not the first product to implement this feature. Many tools in our ecosystem have Git integration. This gave us the opportunity to play with various implementations and sense what made the difference between an enjoyable, and not so enjoyable, experience.

It became clear that there are a few patterns we'd like to avoid.

It's tempting to think of Git as "just another database", and to simply swap out one persistence layer for another. So changes are persisted in a Git repository, but none of the real power of Git is enabled. Branches aren’t supported, commit messages can’t be supplied, and text records may not be human-readable, etc.

The only benefit of Git in this scenario is the historical record, which certainly isn’t nothing, but even this is compromised.

Replacing dbTransaction.Commit() with gitRepo.Push() might be the quickest way, but as a user, it’s rather disappointing.

Anti-pattern #2: Baby with the bathwater

In this anti-pattern, users can opt-in to Git integration, but only if they're willing to forfeit other features.

Having spent the past several months building this feature, it’s easy to see how this happens, and sometimes it’s inevitable.

For an application built on a relational database, it’s difficult to ensure all the various features still function when a chunk of the application data is no longer stored in the database and no longer has a single version.

It’s tempting to simply disable them and convince yourself it’s the user’s choice. And honestly, in early releases of this feature, we will disable some functionality, but wherever possible, we are striving to ensure the decision to enable Git comes with as few compromises as possible.

In this pattern, Git concepts are abstracted in the application. An example might be, branching exposed as a “draft” metaphor.

There’s nothing wrong with this, and done right, it can be very powerful. But it’s risky for an application like Octopus, where users are likely to have an understanding of Git concepts.

Where possible, we’ve used Git terminology and concepts rather than trying to hide them under abstractions.

We firmly believe that wanting Git integration does not imply wanting to forgo all UI assistance. We decided early on not to force a choice between Git integration and a good UX.

Having a human-readable text representation of your config, which you can view history, branch, compare, and merge, is empowering. Staring at a blinking cursor in an empty text file isn't.

Even more than an automation tool, Octopus is a collaboration tool. Making editing a text file the only way to make changes locks out many people.

We decided we wanted the best of both worlds: the superpowers of Git and the usability of Octopus. Let's take a look at some specific design decisions:

Branches as a core concept

Branches are Git’s superpower, and we want to leverage them as fully as possible. We're exposing the ability to switch branches in the Octopus UI: 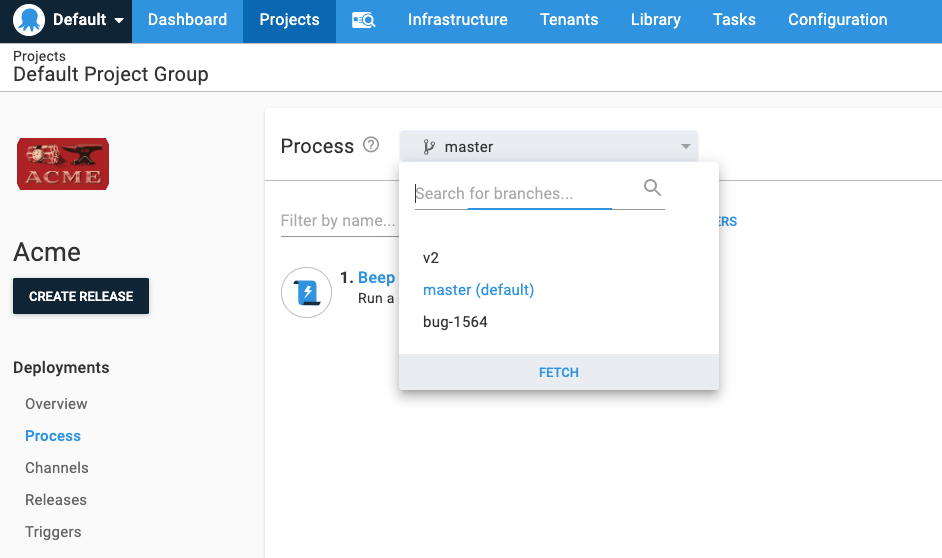 This allows easily switching to a new branch to make changes to a deployment process, without impacting the main branch. It allows rapidly switching between branches when viewing a specific step.

Keeping with the expose Git concepts principle, when Config as Code is enabled for a project, we have relabeled the Save buttons as Commit.

We also observed there are two types of changes. Examples of these are:

In situation #1, we felt it was likely you wanted to enter a meaningful commit message.

In situation #2, being prompted for another commit message was unlikely to result in a meaningful description (or at least one safe for work).

We want to cater for both scenarios, so we've introduced a split-button that when clicked will use a default message without prompting, but the ... provides the ability to enter a commit message. 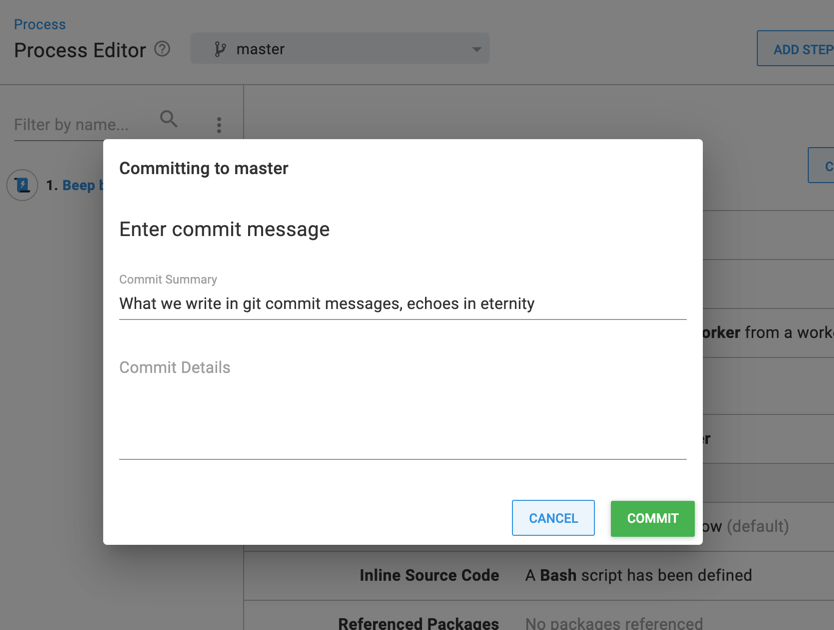 Releases and Git: A perfect match

Config as Code fits perfectly with the concept of a release in Octopus.

Today, when you create a release, it takes a snapshot of the current deployment process, variables, and a few other things.

With Config as Code enabled, when creating a release, it will allow selecting the Git branch (and soon the commit or tag) containing the deployment process: 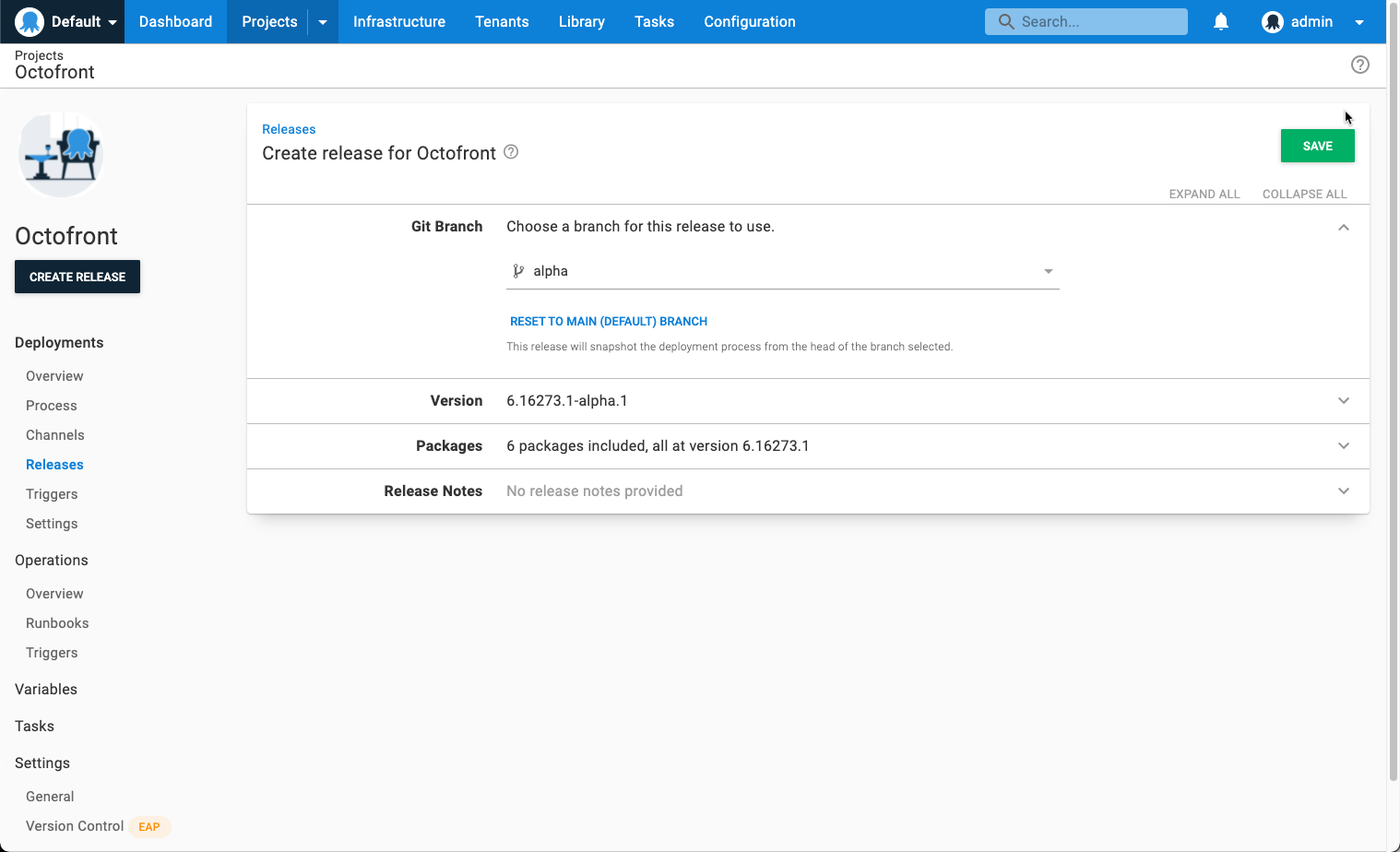 From this point, your release doesn’t change as it progresses through the environments in your project’s lifecycle, just as today.

Not YAML, not JSON, not XML

An obvious question was which configuration language will we use? YAML, JSON, XML? Over the past few years, we've asked many people for their opinion. Our conclusion is that everyone hates all of them. It felt like asking which cleaning product would you prefer to drink? Perhaps this is because the trade-offs each one makes are so apparent. We accepted that no choice had anything close to majority acceptance.

For our configuration language, we are using a language based on Hashicorp’s HCL.

Our primary considerations were:

The other obvious contenders were YAML, JSON, and XML.

We like HCL. We feel it's the right tool for the job. Even though we've openly used HCL as the starting point, we're referring to our implementation as Octopus Configuration Language (OCL).

We've built our own parser/serializer, and there's no obligation on us to follow any direction Hashicorp takes HCL, and nothing preventing us from making changes.

To be honest, we feel like the choice of configuration language is far from the most important part. The benefits would be similar, regardless of which we chose.

The next step is getting this into your hands. We rolled out an early access preview of Config as Code in 2021. It will be out of early access and available to use in production soon.

Watch our webinar: Introducing Config as Code in Octopus

Derek Campbell and Pete Gallagher talk you through getting started with Config as Code in Octopus and best practices when using Config as Code at scale.

Tagged with: Product Configuration as Code