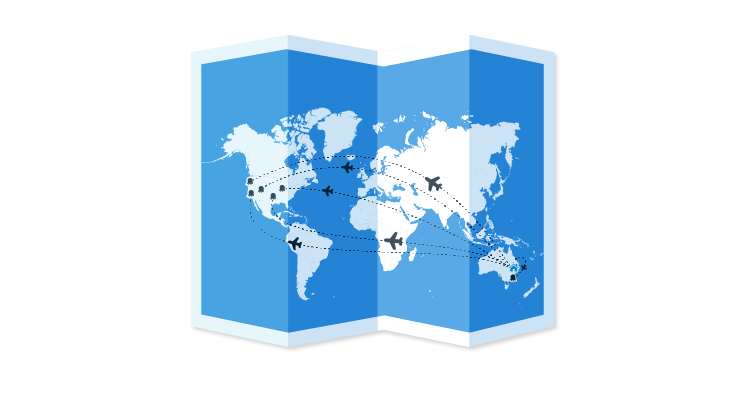 Octopus recently started attending conferences and I thought it would be interesting to share our experience. It was something new and exciting for everyone in the team but we didn't really know what to expect. Damo has been leading the process of finding great events and organising everything required to attend and exhibit. The early days were a bit daunting when we received 40 page exhibitor packs but Damo was on top of it! :)

Why did we start exhibiting at conferences? Great question! The main reason was to grow awareness of Octopus so more people try it. We're very fortunate that Octopus is popular and growing but there are still a ton of people who haven't heard of us or tried it. We believe we have a great product and our statistics show that if someone tries Octopus, they generally stick with it. So we thought talking to people at conferences would be a great way to achieve this. We also decided to focus on conferences in the United States first so we could learn more about how things work.

Another factor is that people have started looking for an Octopus booth at larger events to chat or ask questions. A few members of the team have attended or spoken at conferences and we're asked if we had a booth so they talk to us later. We love our customers so we thought it would be great to have a presence where people can interact with us in person. That said, we encourage everyone with feedback and questions to head over to our support page to get in touch. :)

Overall, it's been a bit of an experiment. We didn't know what exhibiting at events would involve. We wanted to try a few conferences and learn how they worked. Are the events busy? Are people interested in talking to us? What kinds of questions would they ask? What should we say to them? 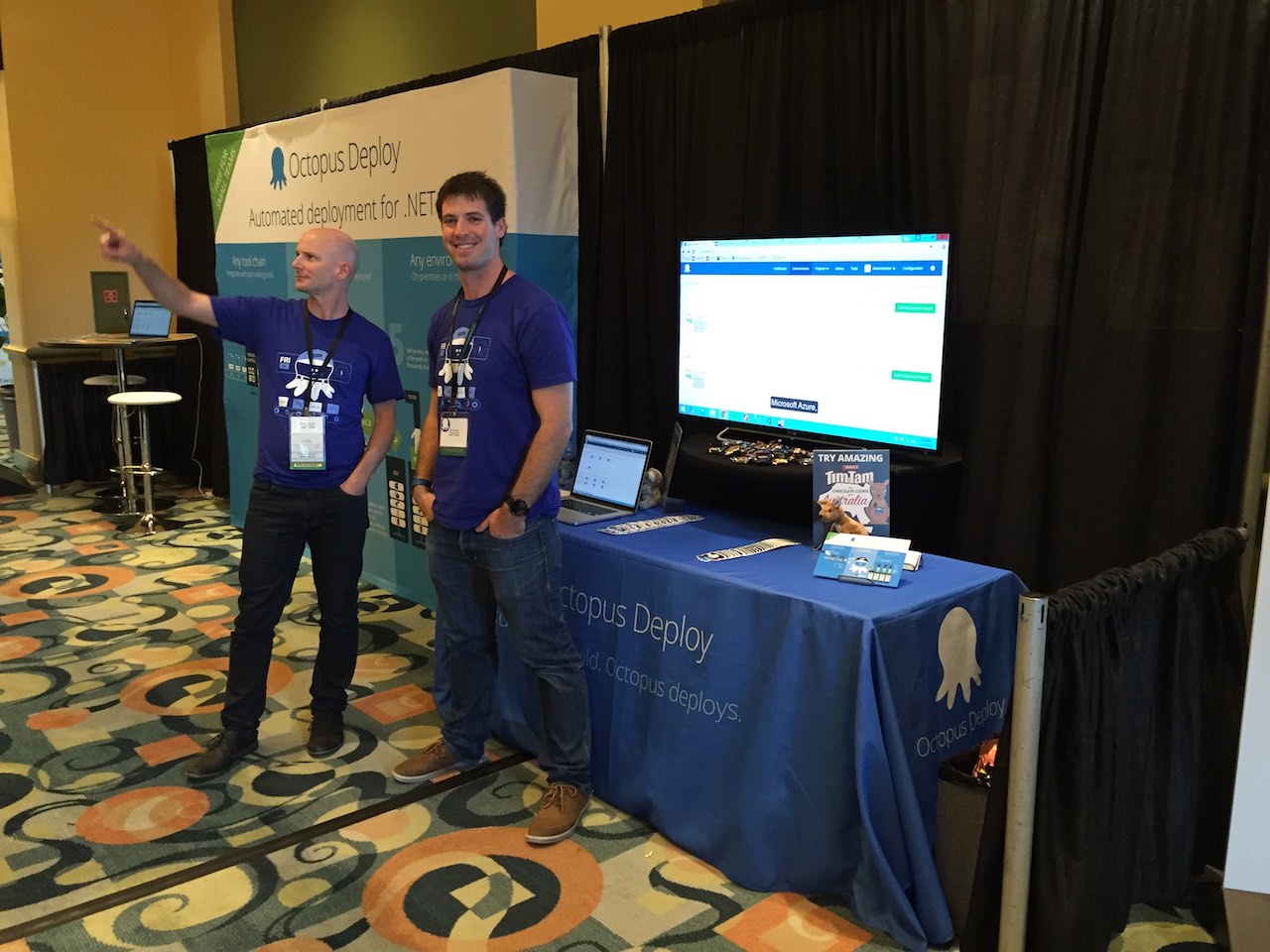 With our goals in mind, we kicked off the year attending Visual Studio Live in Las Vegas, Nevada to learn the ropes. Then we were very fortunate to be able to attend Microsoft's Build 2016 conference in San Francisco, California which was an exciting event full of announcements and it was very busy. This was followed by DEVintersection in Orlando, Florida, Visual Studio Live (again) in Austin, Texas and finally the Kansas City Developer Conference (KCDC) in Kansas City, Missouri.

This week, we're finishing off our inaugural conference year attending NDC Sydney and the entire Octopus team is going to be there! It's going to be an awesome event so if you're at NDC, please come and say 'hi' and grab some treats!

Paul and Damo lead the first two events and a mix of the team attended the rest. I was lucky to attend a couple of the conferences and it was a really fun experience. It's also important to note that we didn't hire any marketing or event management personnel. Like I said earlier, Damo organised the events and the booth was staffed by Octopus developers.

So what is involved in attending a conference? It's a range of tasks from booking flights to organising marketing material (booth signage, handouts, stickers etc) and audio/video equipment. Flights are a big part of the planning process for us because we're based in Brisbane, Australia and we're a long way from pretty much everywhere. The implication of this is very long flights.

Most of the conferences we attended had two day sponsor exhibitions with an initial set up day. We also used this first day to recover from the long flights and adjust to the new time zone. We quickly learned that the conferences/exhibitions had a pattern to them.

Oh, um, no. No, nothing to declare. #vslive pic.twitter.com/OHQu0LTTPX

One of the fun things we do is bring a bit of Australia to the conferences. For each conference, we brought 20 kilograms (~44 pounds) of Tim Tams, an Australian chocolate biscuit/cookie. They're very common and popular in Australia but not widely available overseas. We regularly heard that attendees were asking around if they'd tried the Aussie cookies from the Octopus booth. :) 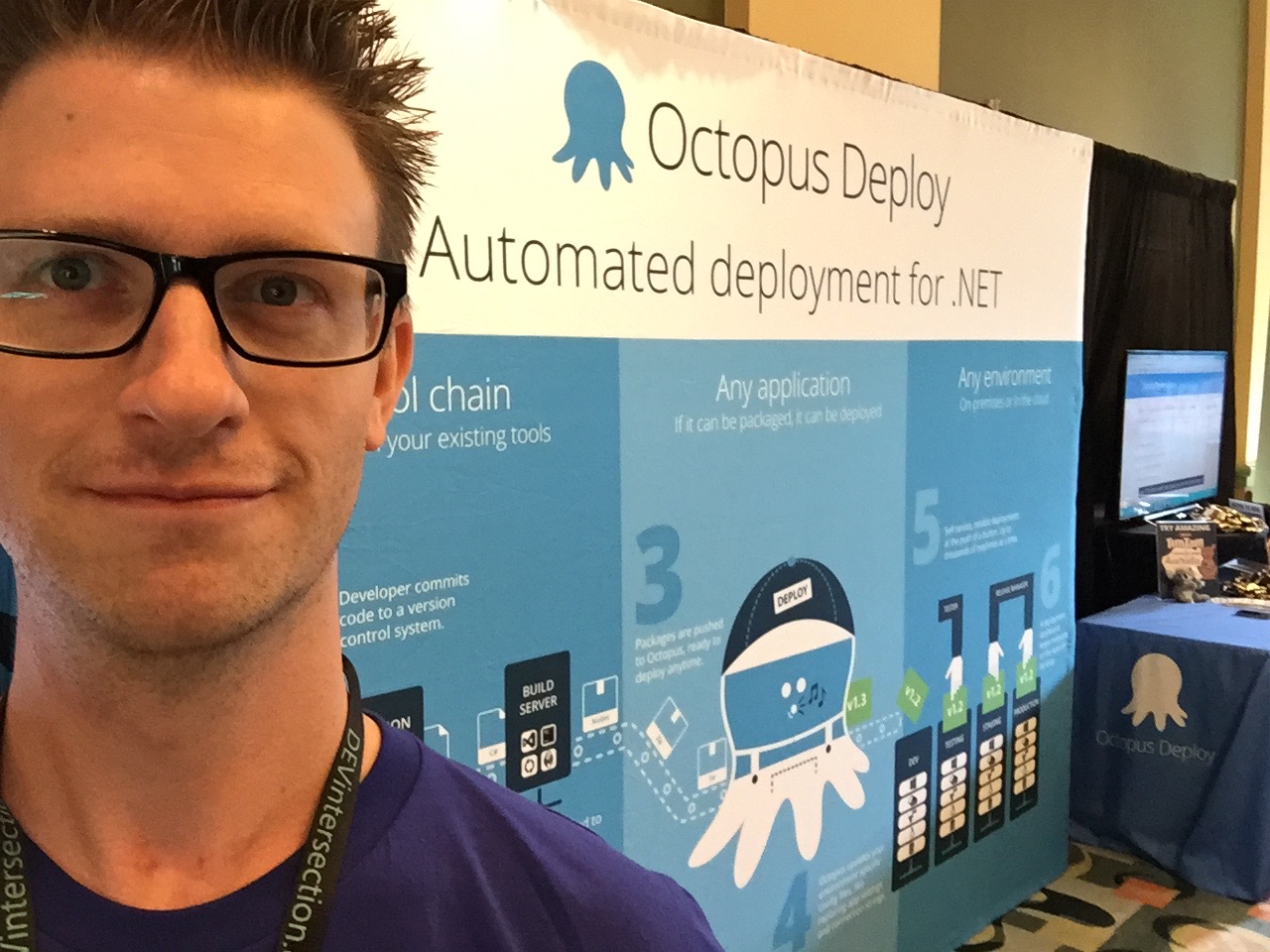 What's it like being in a booth? I thought it was pretty cool! It was wonderful talking to developers from different companies and different regions of the United States and sometimes the rest of the world. It only takes a minute to say hello to get to know someone a little bit better. Where are they from? What company do they work for? And what kinds of apps are they building? We had a lot of genuine conversations with developers who were interested in learning more about Octopus and why it was valuable. We had existing customers talk to us as well as people who had never heard of us and we received all kinds of questions. What is Octopus? How does it compare to other products? Does it work with web sites? How does it handle database updates? Why is it better than deploying straight from Visual Studio?

We expected to help developers learn about Octopus at the conferences but we were surprised by how much we learned about developers. An unexpected benefit of talking to tons of developers was that we better understood the kinds of applications people were building, their preferred tools and platforms and what problems they were encountering. It was great talking to people who had similar problems to ourselves and helping them see how Octopus could help.

That said, it wasn't all roses. It could be quite tiring standing and talking to people all day long. Some people were very skeptical and some conversations were difficult and draining. Thankfully, these conversations were the exception rather than the rule.

Our job at the conferences was to try to increase product awareness but we didn't really approach it in a sales and marketing way. We tried to help people learn what Octopus is, understand the problems it solves and why it's valuable. In our booth, we didn't approach people and start asking them about their deployment needs etc. We only spoke to people if they approached us. So we tried to be as approachable as possible! We didn't sit and hide behind a table; we were standing and smiling each day! 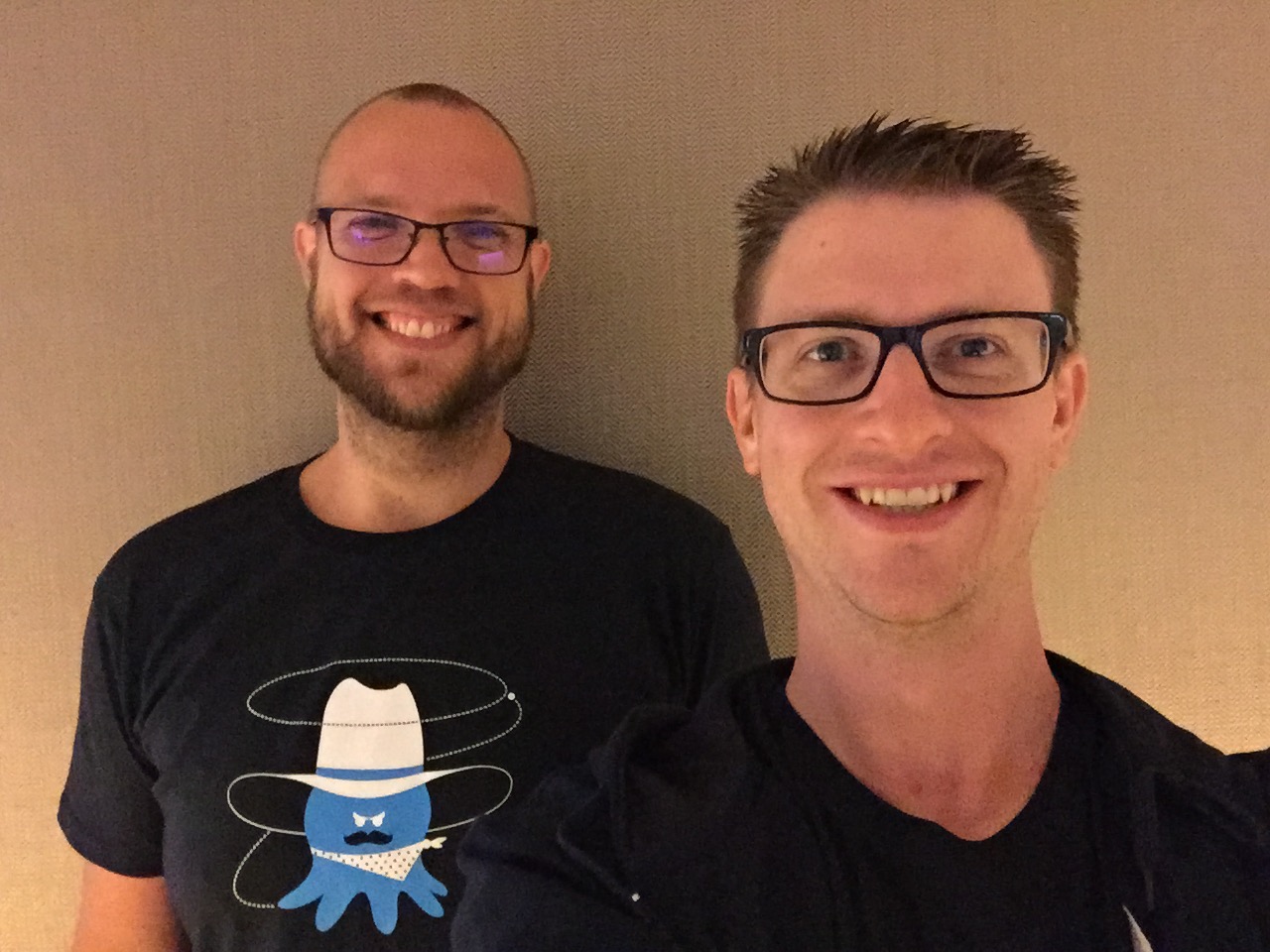 We also brought a ton of Tim Tams and Octopus stickers to entice people to strike up a conversation. :) 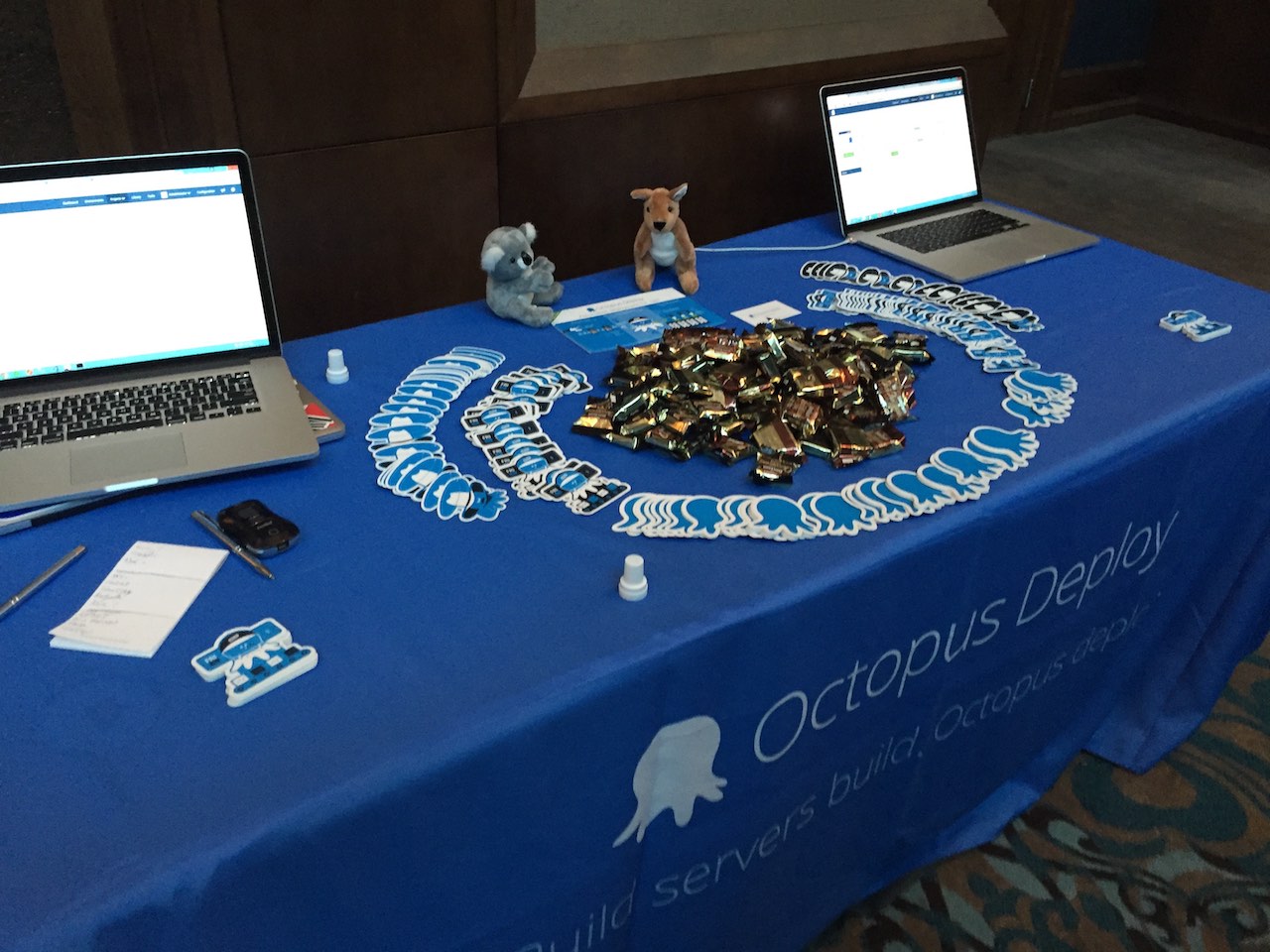 So what did we do if someone walked up to us and asked 'What is Octopus?' We asked them a few questions to better understand their environment and the kinds of apps they were building. We also asked them how they were currently deploying their apps. Based on their situation, we described how Octopus worked but more importantly we tried to help them understand why it was valuable. Then we showed them a working example on a laptop to better illustrate how things work.

Another interesting lesson learned was that developers are a very diverse group but we found there were a number of common types. I think the most common group is what I would call modern developers. They mostly building web applications and use a mixture of modern frameworks (ASP.NET MVC, Angular etc), technologies and tools. This group generally asked questions about how Octopus worked and how it worked with web apps/databases and supporting technologies.

Another common group of developers is what I would call advanced developers. They mentioned they used the latest tools and techniques and already had a delivery pipeline of some sort. This group generally asked questions related to the value we could add to their existing processes, how Octopus compared to products they already used or how the could integrate with our API.

The final common group of developers is what I call old-fashioned developers. They weren't necessarily using source control, build servers or most modern practices that are commonplace nowadays. This was a big surprise and generally they weren't ready to look at a product like Octopus Deploy. Some of these developers were looking to improve their environment and were interested in learning where Octopus fit into the overall development process.

Octopus has had a great experience attending conferences. We learned heaps about being a part of great events and we learned a lot about how modern developers are building apps.

We've caught the conference 'bug' so be sure to check our events page for more information on the conferences and events we'll be attending in the future.