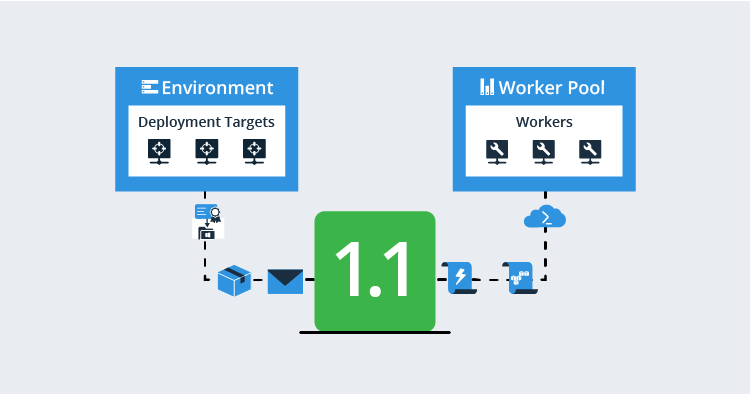 We are just about to release a great new feature that gives you all kinds of new power for setting up your Octopus infrastructure. In 2018.7.0 we'll introduce Workers.

In this post, I'll give you a pre-release peek, tell you the what and why of Workers, and show you how to use Workers to move steps off the Octopus Server.

Future posts will give more walk-through examples to scale up your Octopus infrastructure with Workers and using Workers for cloud deployments.

Workers give you some nice ways to set up your deployments and move work off your Octopus Server, so it's well worth reading carefully, but we've also designed it so you don't even need to know it's there if you don't want to use it.

What Are These Workers Anyway?

Since version 3.0, Octopus has had one Worker. We didn't call it a Worker to start with, and you might have used it without even knowing it was there. It's called the Built-in Worker, and it's bundled with the Octopus server.

Azure, AWS, and Terraform steps all need somewhere to run, so, out-of-the-box that's the Built-in Worker on the Octopus Server. Steps in Octopus are executed by Calamari, our open-source, conventions-based deployment executable. Often, Calamari runs on a deployment target, but in the case of Azure, AWS, and Terraform steps the Octopus Server uses the Built-in Worker to invoke Calamari locally.

Script steps are the giveaway that Octopus can invoke Calamari locally. In the script step pictured you can see the option to run on the Octopus Server; it's the Built-in Worker that makes this possible.

All a Worker does is takes these points where the server could execute Calamari locally, using the Built-in Worker, and gives you the option of executing them on a Worker somewhere else.

What a Worker Is and Isn't

A Worker doesn't take over orchestrating a deployment in place of the Octopus Server; it just executes steps that the server instructs it to. Nothing has changed about how script, Azure, AWS, or Terraform steps are executed; Workers just provide an option about where those steps are executed.

The Octopus Server orchestrates the whole deployment process. Deployment targets are where your deployment goes, and Workers are machines that can execute some steps for the server but aren't the target of the deployment.

So, Workers are just machines that can run script, Azure, AWS, and Terraform steps, and they can be Listening Tentacles, Polling Tentacles, or SSH machines (SSH Workers can only run bash scripts).

Over the course of a couple of posts, I'll flesh out the details of three cases where Workers come in handy (or are essential).

Of course, there are also other ways to use Workers.

But, before we get into the examples, let's look at how the whole Workers setup works.

For example, here I'm using the Tentacle Manager to set up a Tentacle, but you can also script the setup, and even do the full worker registration from the command line. 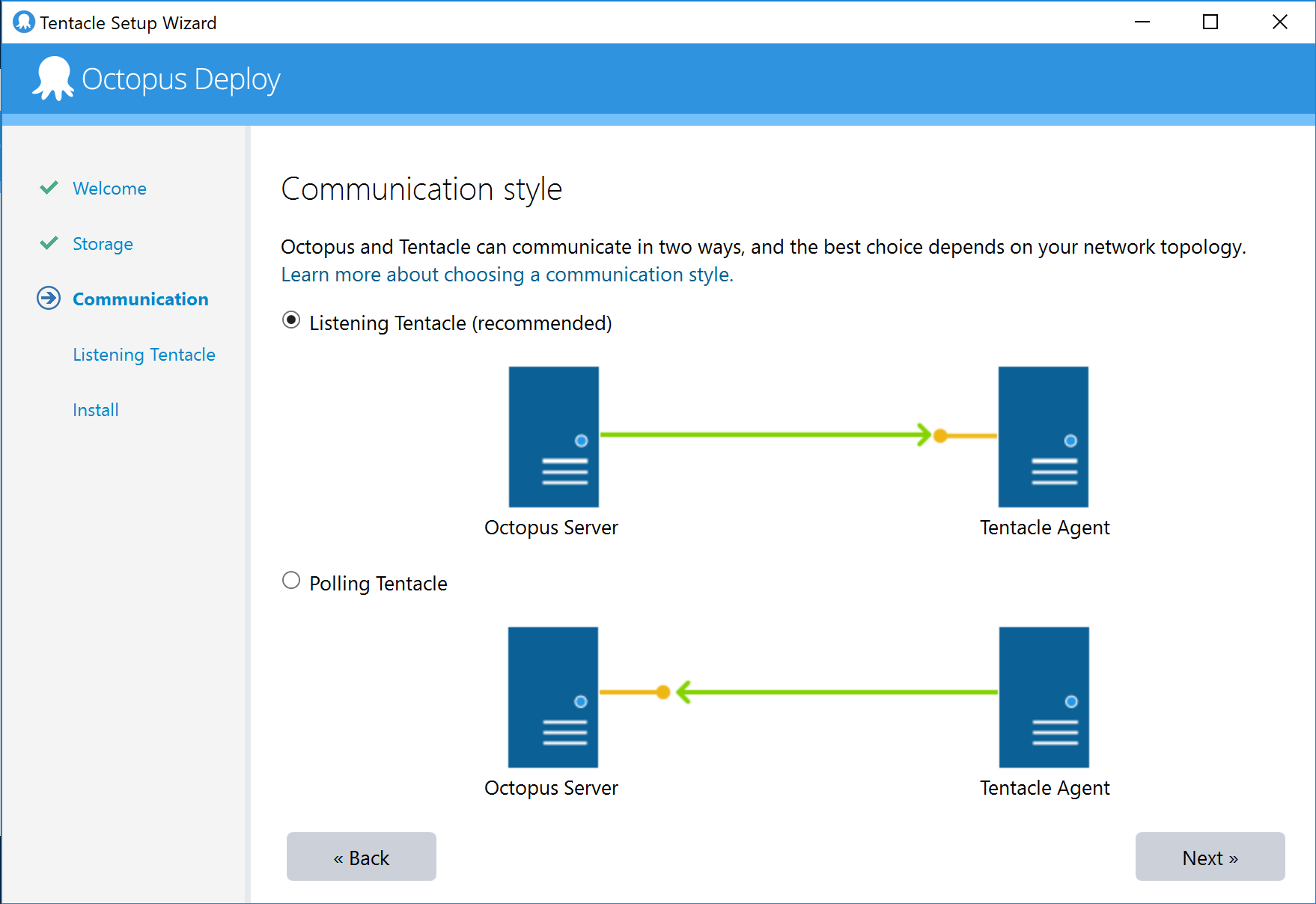 Once I've setup the Tentacle, I navigate to the new Workers tab in Infrastructure and select "ADD WORKER". 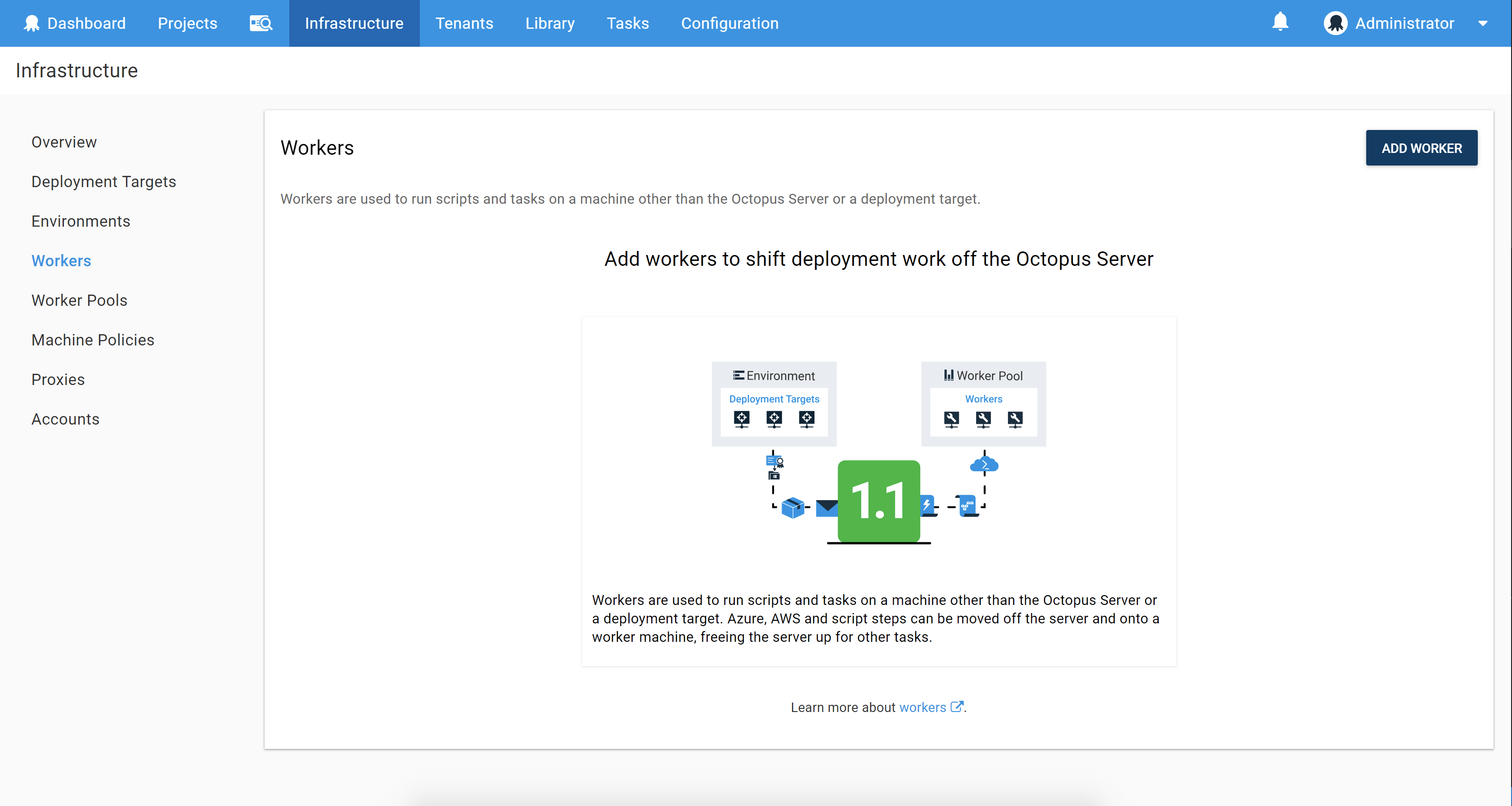 After entering the host and port of the Tentacle I configured, I give the Worker a name, select a machine policy, and put the Worker in a Worker Pool. 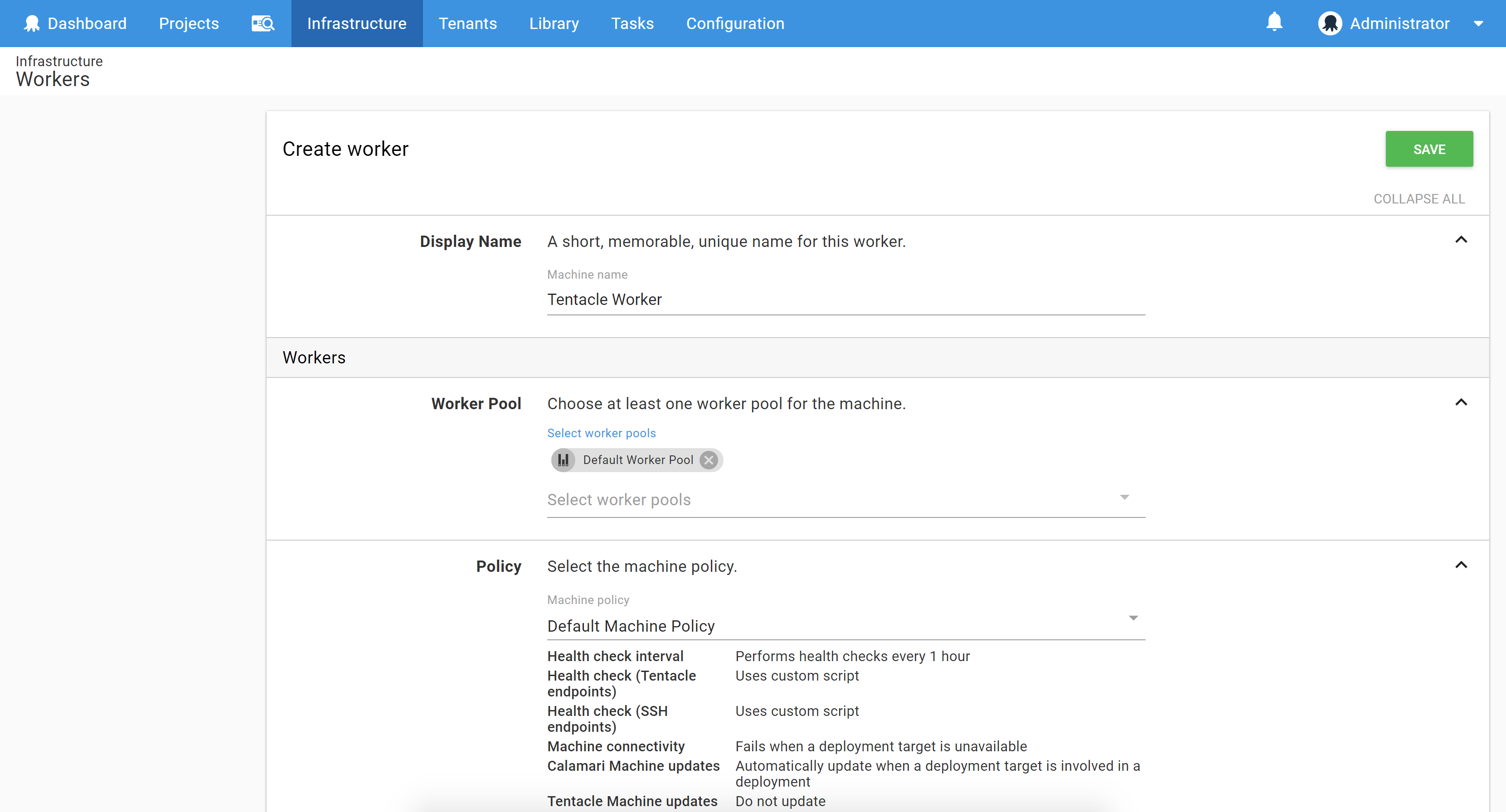 Workers are grouped into Worker Pools. From the Octopus Server's point of view, all the Workers in a Pool are equivalent. Pools might represent machines setup to assist with particular kinds of deployment, or for a specific set of tools installed, or maybe you'll assign Pools for particular teams or projects you are undertaking (that'll work nicely in a short while when our Spaces feature comes in).

Steps - well, script, Azure, AWS, or Terraform steps - can now target a Worker Pool and will be executed on a Worker from that Pool. There's always a default Pool that steps are assumed to target if nothing else is specified. You're free to change which pool is the default. Initially, it starts out, unsurprisingly, as a pool called "Default Worker Pool".

There's just two options Octopus has for picking a worker on which to execute a step.

We took a hard look at use cases for not using Workers and for transitioning to Workers. We think we got smooth answers for both.

Point (1) above says it all. Any steps that would require a Worker will resolve (because your steps won't say any different) to the default Worker Pool, and that will end up at the Built-in Worker, which is the same experience Octopus users have had since version 3.0.

We've also got a nice story for the transition away from runnings steps on the Octopus server. No deployment processes need updating. Just a tiny bit of setup and Octopus will move steps off the server and onto Workers.

We all love our dev teams (at least developers like me hope you do), but maybe you would prefer it if they couldn't execute code on your Octopus Server.

Let's have a look at that in action. I started with an Octopus Server setup with no Workers (other than the Built-in Worker, of course) and no Worker Pools (other than the default Pool). I created a simple project with a script targeted at the server. 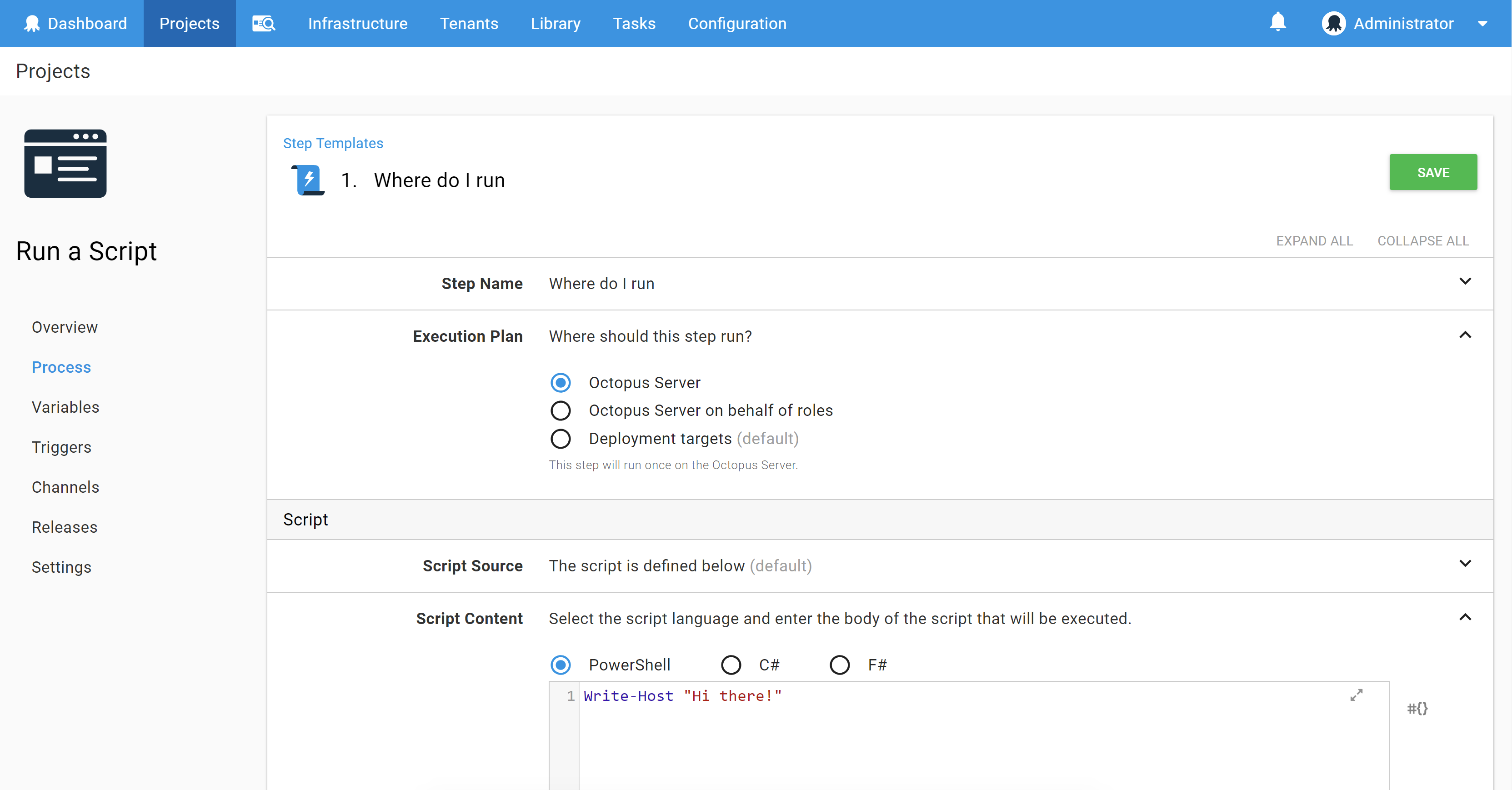 After deploying the project, the logs clearly point out that the script ran on the Octopus Server.

I then, as described above, provisioned a Tentacle and registered it as a Worker in the Default Worker Pool.

On deploying release 0.0.2 of the same project (unchanged), the logs let me know that it now ran on the Worker instead of the server.

That's all it takes. Just one Tentacle is enough to stop user code executing on the Octopus Server.

Of course, it's also possible to provision multiple Workers to share the work the server hands out. I'll talk about that in the next post.

It's also possible to turn off the Built-in Worker, meaning that it never gets invoked even if the default pool happens to be empty. Check the option in {Configuration -> Features}.

The same concurrency rules apply as always did. The server still respects your parallel steps and Octopus.Action.MaxParallelism, so multiple concurrent steps can run on Workers, even on the same Worker, just as the Built-in Worker runs many steps concurrently.

Workers is about to be released in Octopus 2018.7.0, so keep an eye on our releases for that.

On the blog, I'll be posting a couple more installments about Workers. Next up, I'll be looking at using Workers to reduce load on the Octopus Server. After that, I'll take a look at how we can use Workers for some nice patterns for cloud deployments.