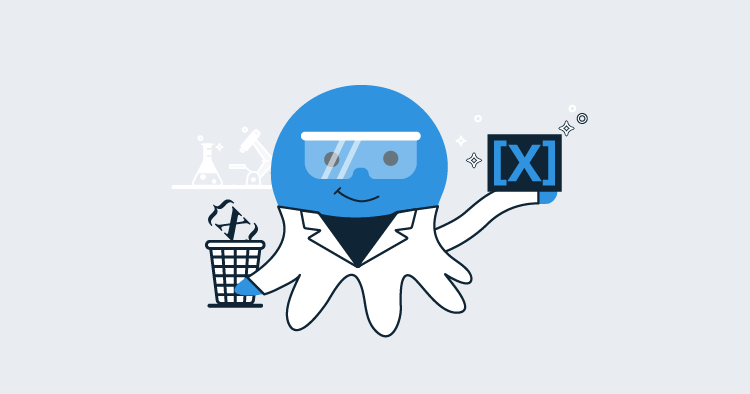 As part of the UI overhaul that occurred in Octopus 4.0, we took the opportunity to redesign the Variable Editor. This was a pain point for many of our users and was a highly requested change. Let me take you on a journey through the changes we have made to the Variable Editor! 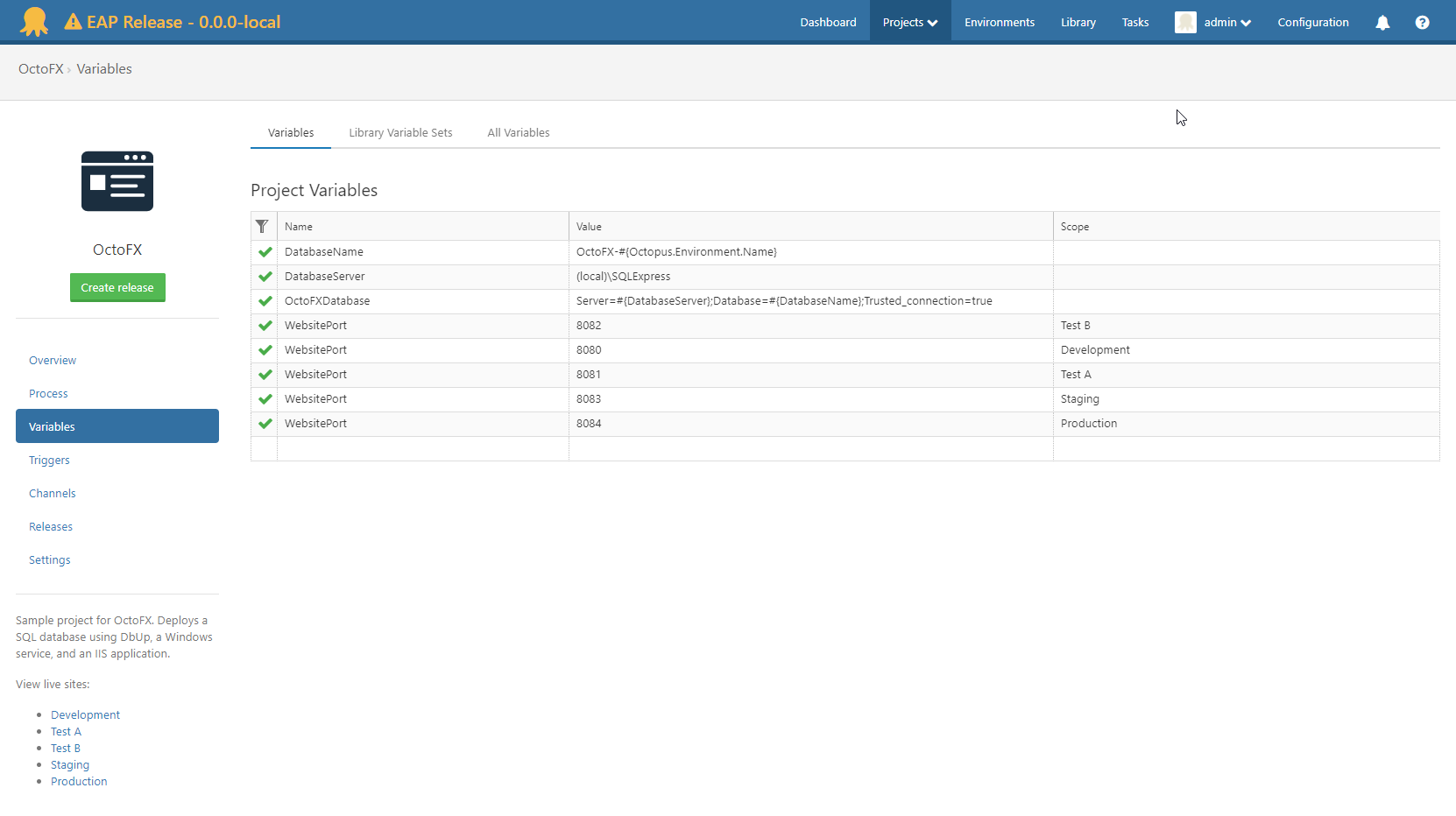 It was based on SlickGrid, and it had a number of problems that we wanted to solve as part of the redesign:

By far, the most important shortcoming of the old variable editor was how difficult it was to extend. It was an area of code that received very little attention, and any changes were often risky to make.

In 4.0, we shipped the new Variable Editor. It looked something like this: 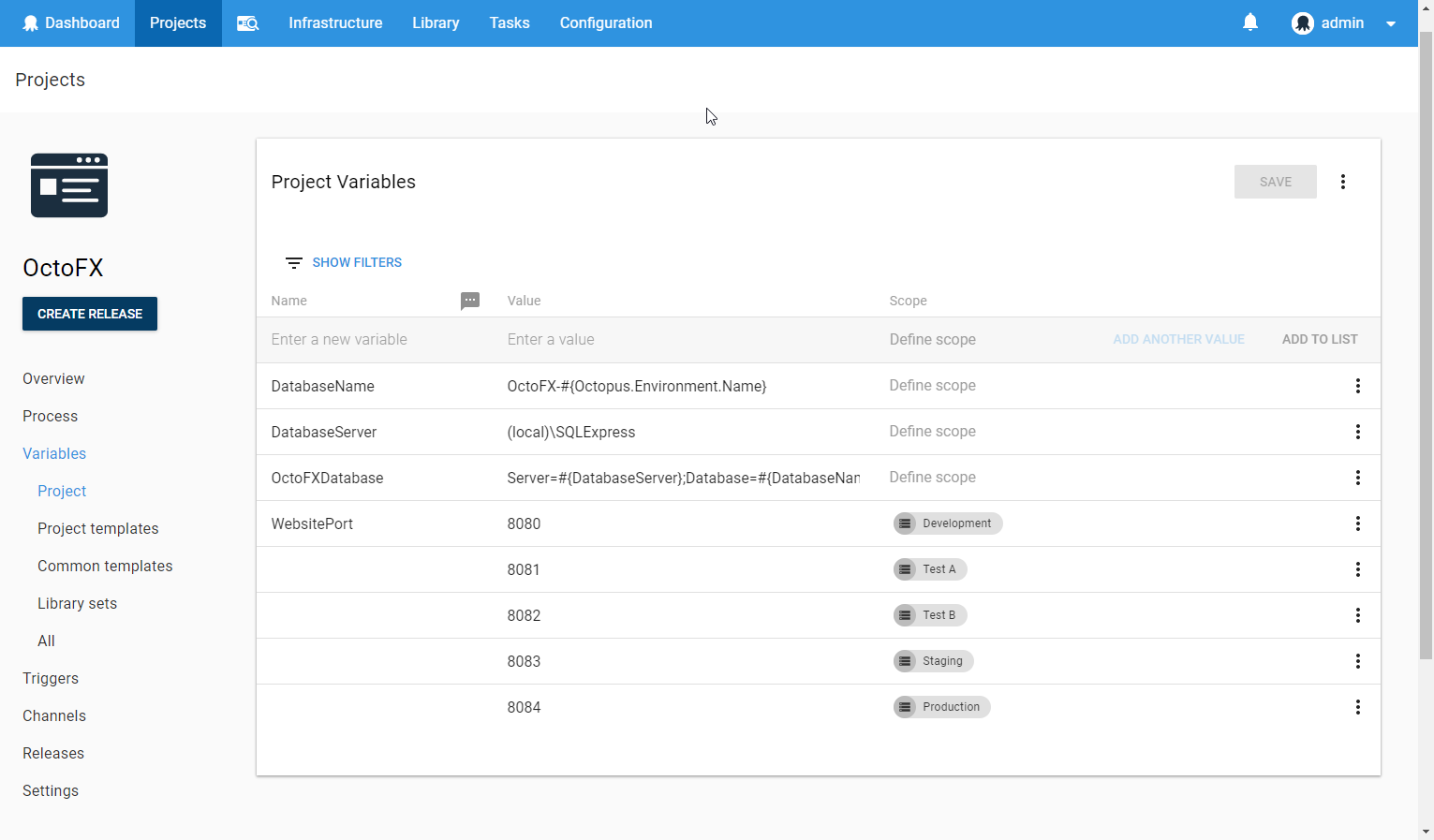 It improved on the old Variable Editor in the following ways:

However, there were some still some major problems with this implementation:

We decided not to delay the release of 4.0 to fix these issues, but instead focus on fixing them as soon as possible.

In the old Variable Editor, users were able to resize the table columns. This was useful with long variable names or values when you wanted to resize the columns so that you could see more information. Omitting this feature proved to be problematic for a number of our users. The problem was made worse by the larger font size in the new Variable Editor, leaving less space to display critical information.

In version 4.0.11 we shipped a Variable Editor in which you could resize columns.

These resizable columns were implemented with the help of the react-dnd library and works by applying a percentage width to the columns after you have resized them. The advantage of using a percentage width as opposed to a fixed width is that it automatically responds when the user resizes the browser window.

Scrolling was a big problem with the initial release of the Variable Editor, and it didn't only affect large variable sets.

The problem is that rendering a row is a relatively expensive operation. One of the main reasons it is expensive is because of the specific components we use in the Scope column. The widths of these chips need to be measured to calculate how many chips we can show in the available space.

Each render of this cell involves:

This happens for each row in the variable editor as it scrolls into view because we are using virtualization, and this is the main reason that rendering is slow. An alternative to this approach would be to render all rows up front without virtualization, but this makes the initial render very slow. For a large variable set, this becomes painfully slow and is an even worse problem than the scrolling performance.

To address this problem, we made a number of optimizations to the way we render and measure these components. We measured a number of things more often than we needed to, and we were able to minimize the cost of some of the reflows. These changes ended up having a noticeable impact on performance.

We also discovered that we were unnecessarily re-rendering more components than we needed to as the user scrolled. We focused on only rendering the bare minimum when you scroll, by using immutable data structures and implementing shouldComponentUpdate in a few key components.

The combination of these changes made the scrolling performance acceptable in both Chrome and FireFox.

IE11 and Edge seemed to have different performance characteristics, and we're still not satisfied with the scrolling performance in these browsers (although it now performs significantly better than it used to). So far, we haven't yet worked out the root cause for these differences, but it's an ongoing investigation. For now, we've mitigated this issue by disabling virtualization for smaller variable sets that can perform an initial render in a reasonable amount of time. 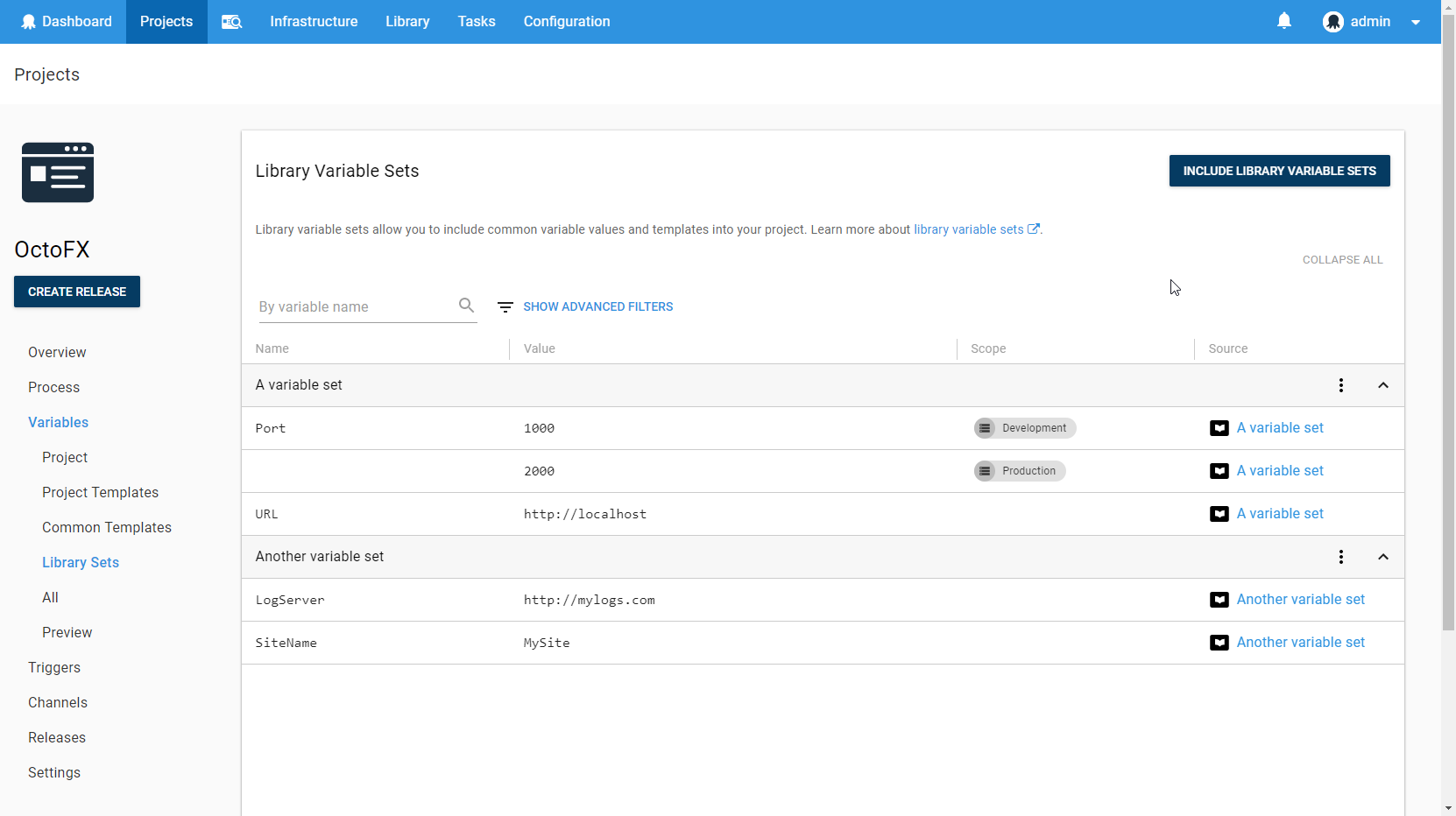 We decided to change the way we load data on this page so that it behaves more like the Environments page, where the content of each Environment is only loaded when you expand that Environment. Additionally, we optimized the way requests are made by adding a new endpoint to our API that allows you to load multiple Variable Sets at the same time.

All filtering of variables happens on the client side, so we needed to still make it possible for users to search through all variables in all Included Variable Sets. Fortunately, we have an Expand All button on the top of the page which has the side effect of loading all variable sets. If a user wanted to search all of their variable sets for a specific variable, then they can first Expand All of the variable sets, and then apply their filter.

The new model that we introduced to our users is that a variable can have multiple values. Users can declare which values they want to use in different scopes. Since all of the values are associated with the same variable, they will use the same variable name at execution time.

We started by changing the UI to reflect this new model which meant that we could maintain backward compatibility for the API. This meant that we were simply grouping variables by name in the UI, which many users found to be confusing at first. 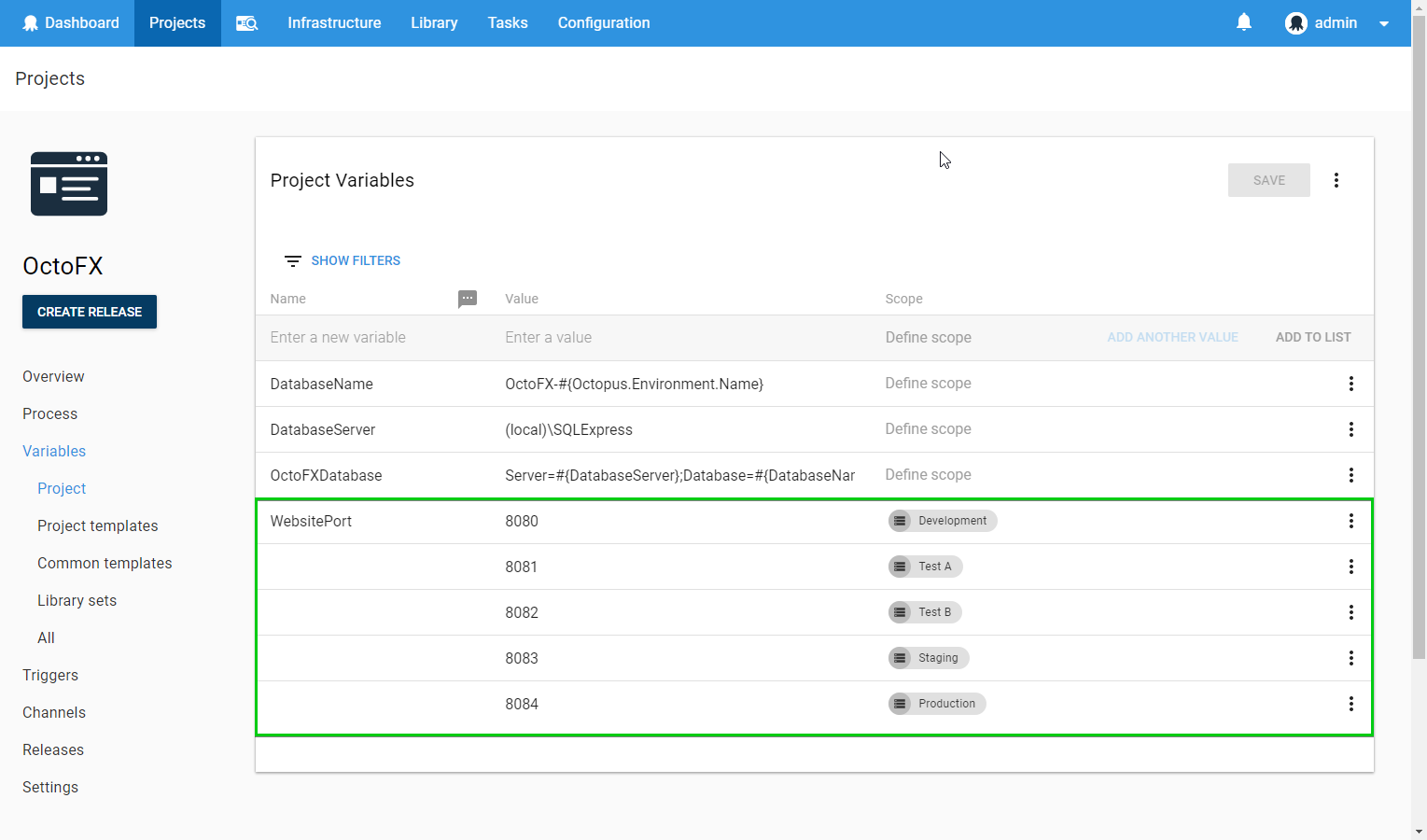 A common complaint was that the name was missing for certain variables. It is easy to see why users thought this was the case because at first glance the main functional difference between the new Variable Editor and the old Variable Editor appeared to be that variable names were sometimes missing.

We ended up iterating on this design a few times and came up with a new design which emphasized that we're showing multiple values and scopes for variables. There is now a separate "header" row in the Variable Editor for each variable that has multiple values. This also solved another problem that we had; we now had a sensible place to put an overflow menu that contained actions that were specific to the whole variable, rather than the individual values. 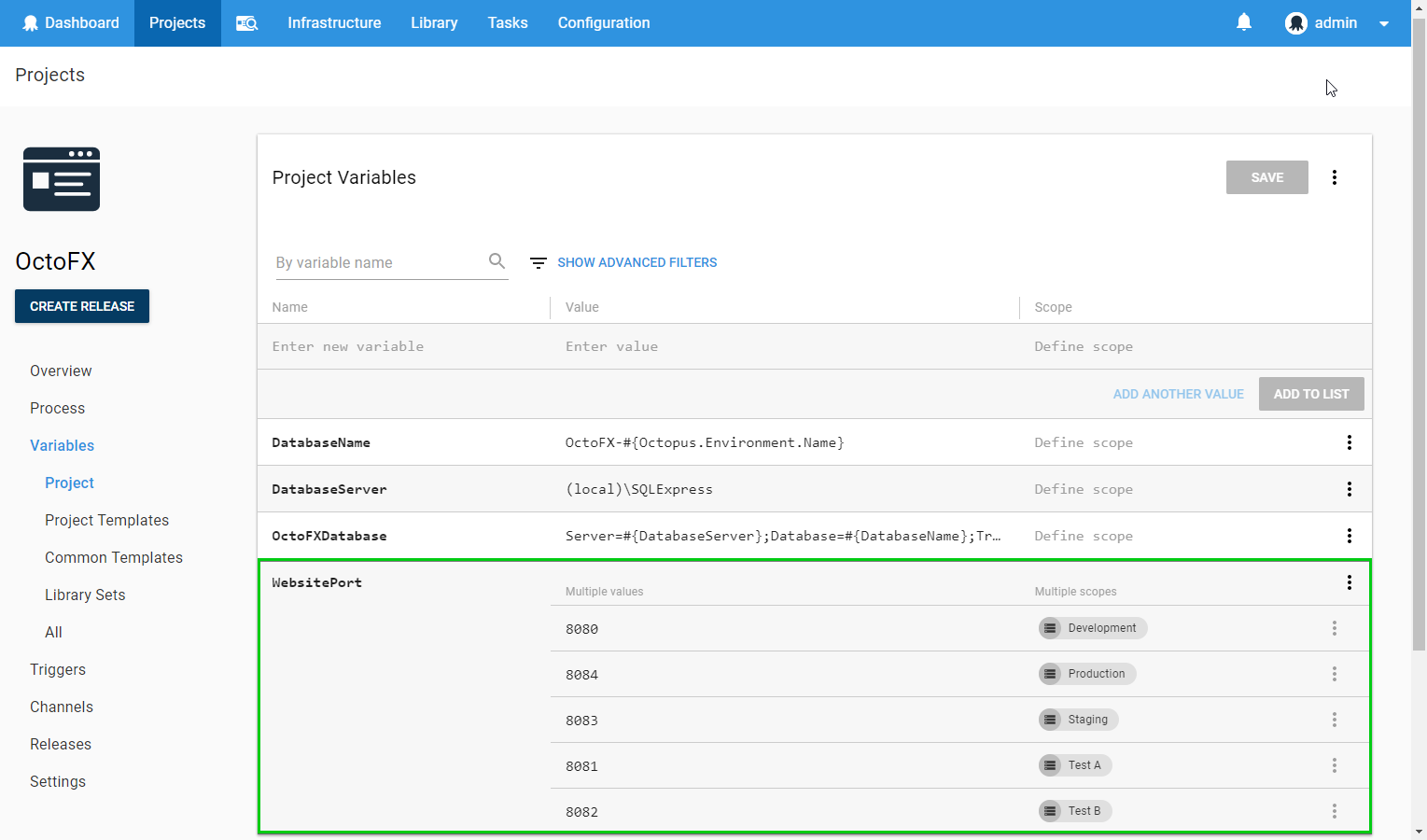 The new Variable Editor has a number of different warnings and messages to provide more information to the user about the state of their variables and guide them towards crafting maintainable variables.

Originally, we wanted to add a warning that showed when a user was missing a value for a variable for a specific Scope. For example, if you had a variable which had values for Development and Test, but not Production, then you might expect the deployment to fail during production because there is a missing variable value. 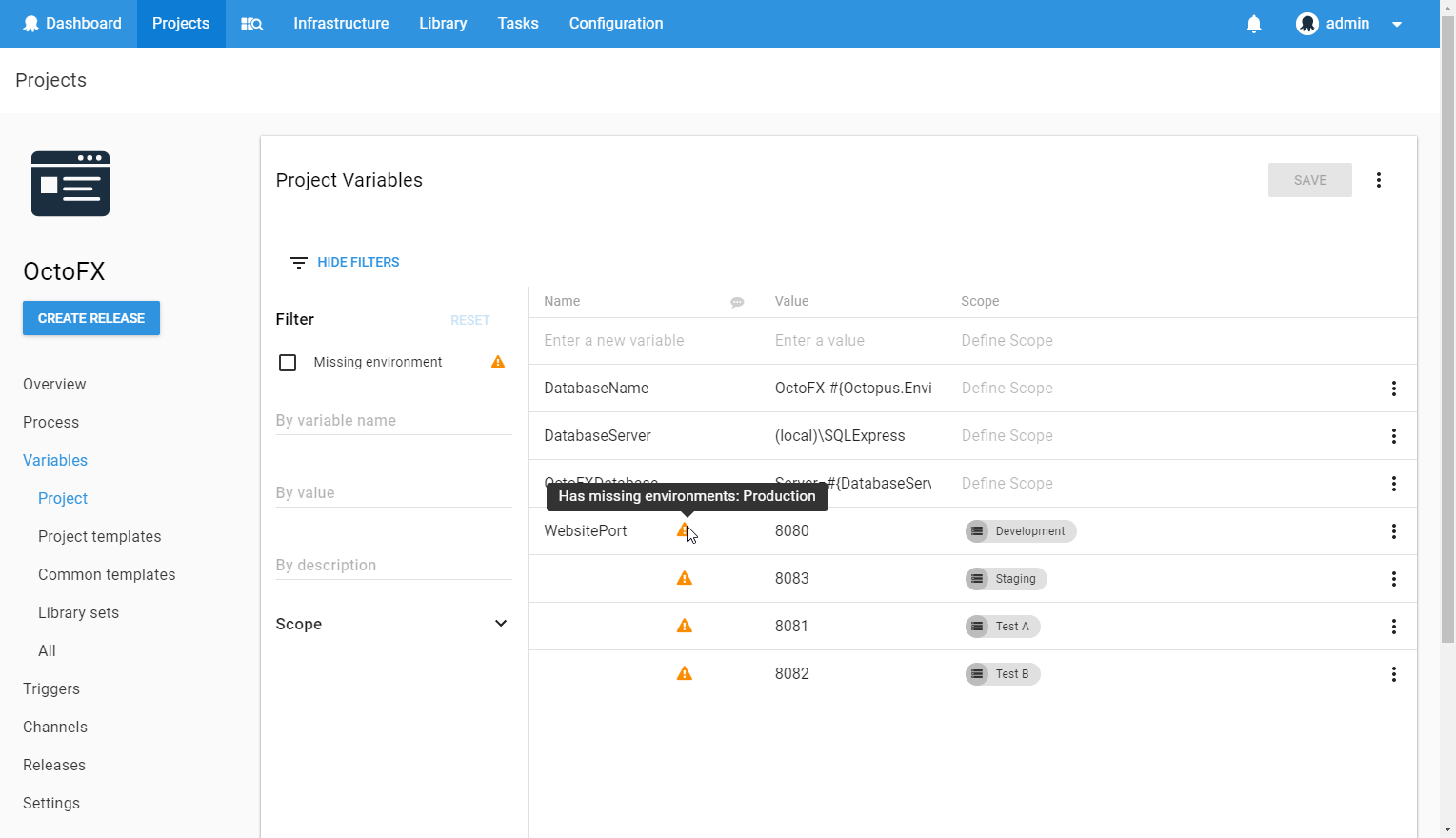 This warning ended up being overly complex to get right. Consider a situation where you have a project with channels, and the channels use different lifecycles. We would need to check that each environment in each channel had a value scoped to it.

The story gets even more complex when you consider there are multiple ways to scope your variable values that result in a valid value in every possible deployment scope. A common way to do this is to have a single unscoped value that applies to any environments that don't have a value explicitly scoped to them. However, there are other ways of achieving the same result. For example, instead of having an unscoped value, you could have a value scoped to the specific deployment steps which uses that variable.

We ended up removing this feature before the initial release of the Variable Editor because it proved too difficult to implement without producing a large number of false positives.

We shipped the new Variable Editor with the ability to show warnings that indicate when a variable value was empty. 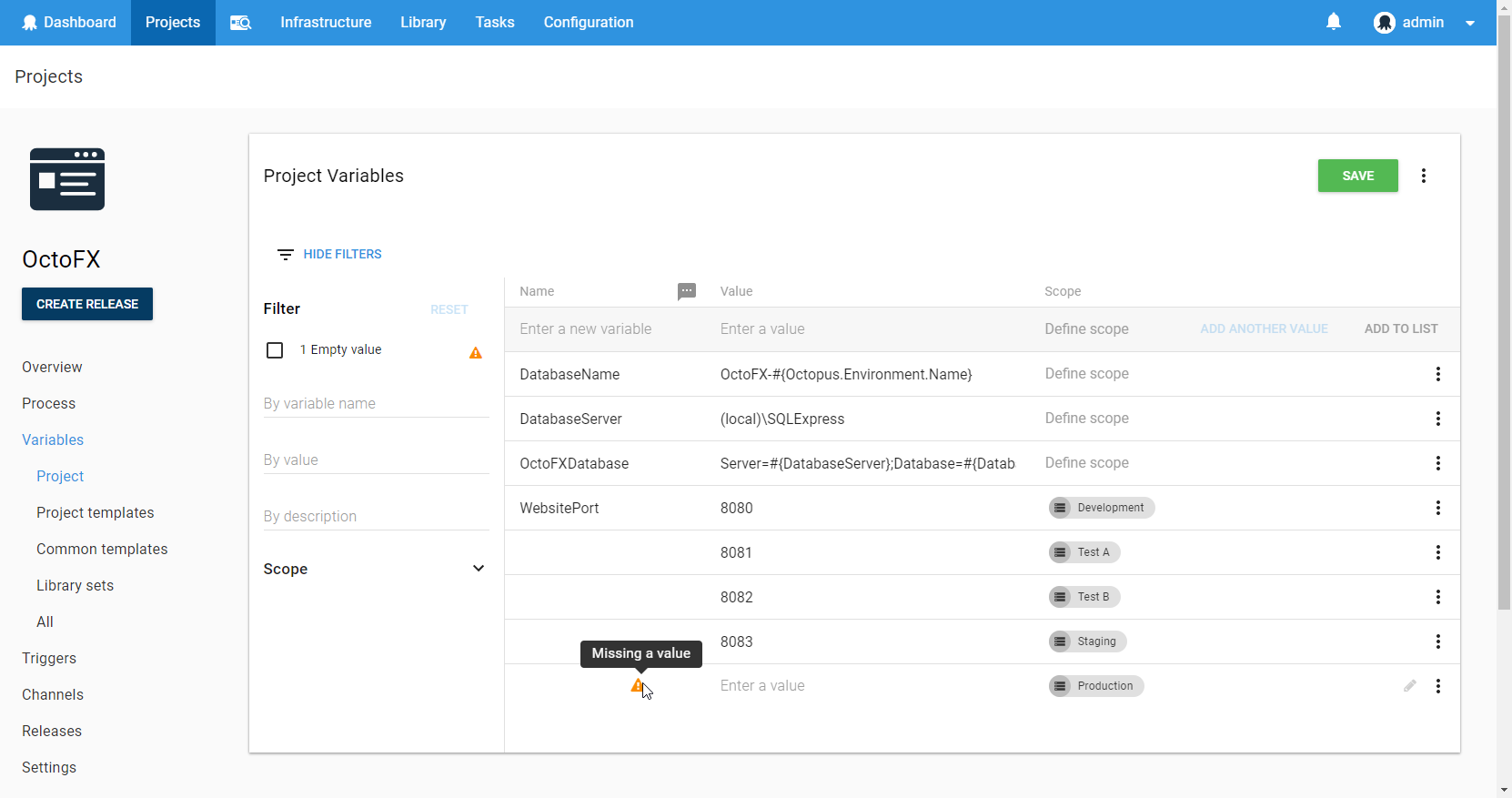 We thought that it would be rare that the user actually wants to do this. However, more users than we expected were using empty values in valid ways. The warning indicator ended up being a bad visual indicator for those users. It made them think they had done something wrong, and it also added a lot of visual noise. There was also no way to suppress this warning, which meant that they would be stuck forever with a useless warning. We still thought there was value in being able to filter to variable values that did not have a value, so we decided to just remove the warning indicator. 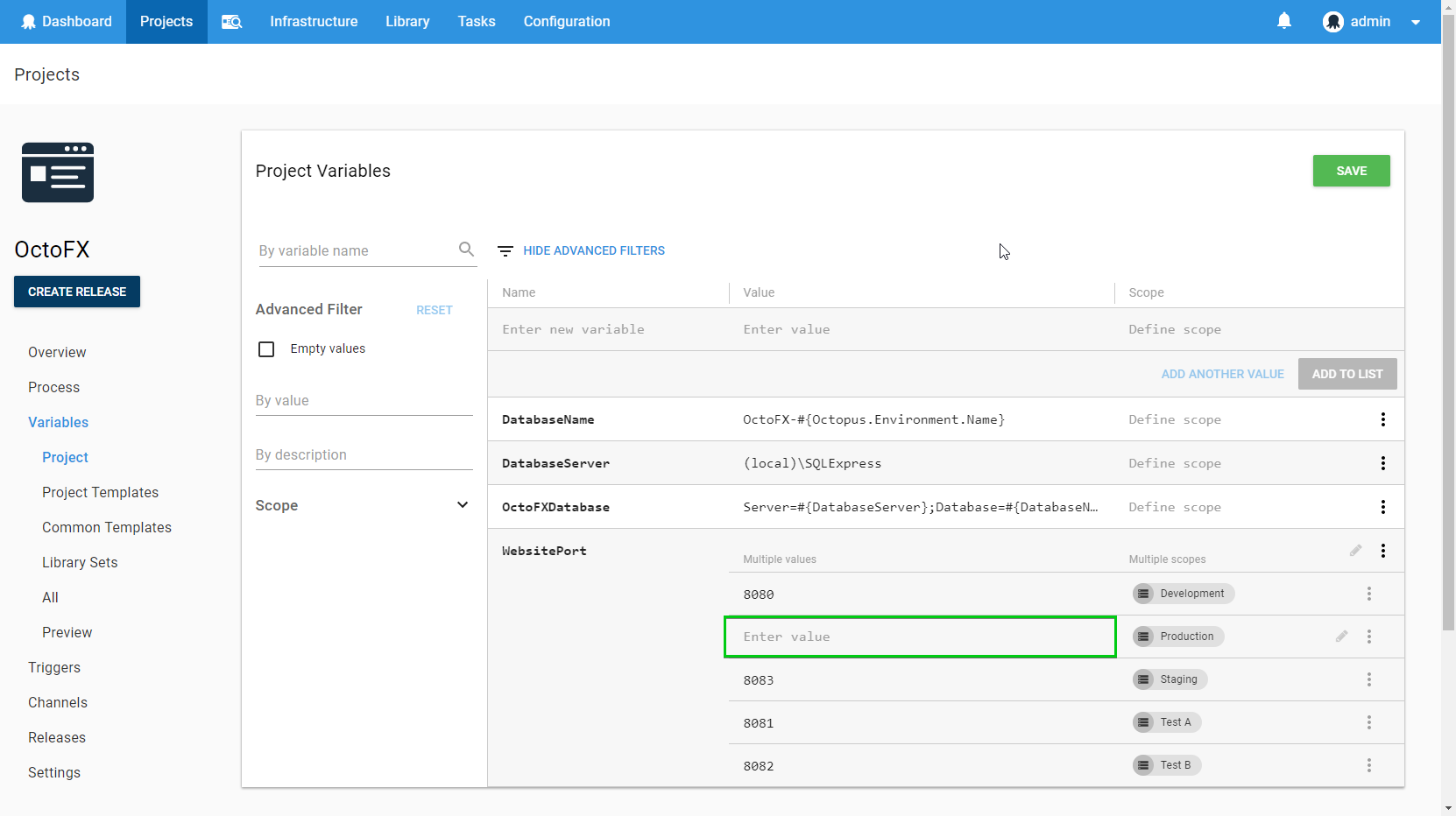 As part of our improvements to AWS support in 2018.2, we added first-class support for AWS accounts as a new type of variable. With the new Variable Editor, this was a relatively easy extension to add and works in the same way as Certificates. 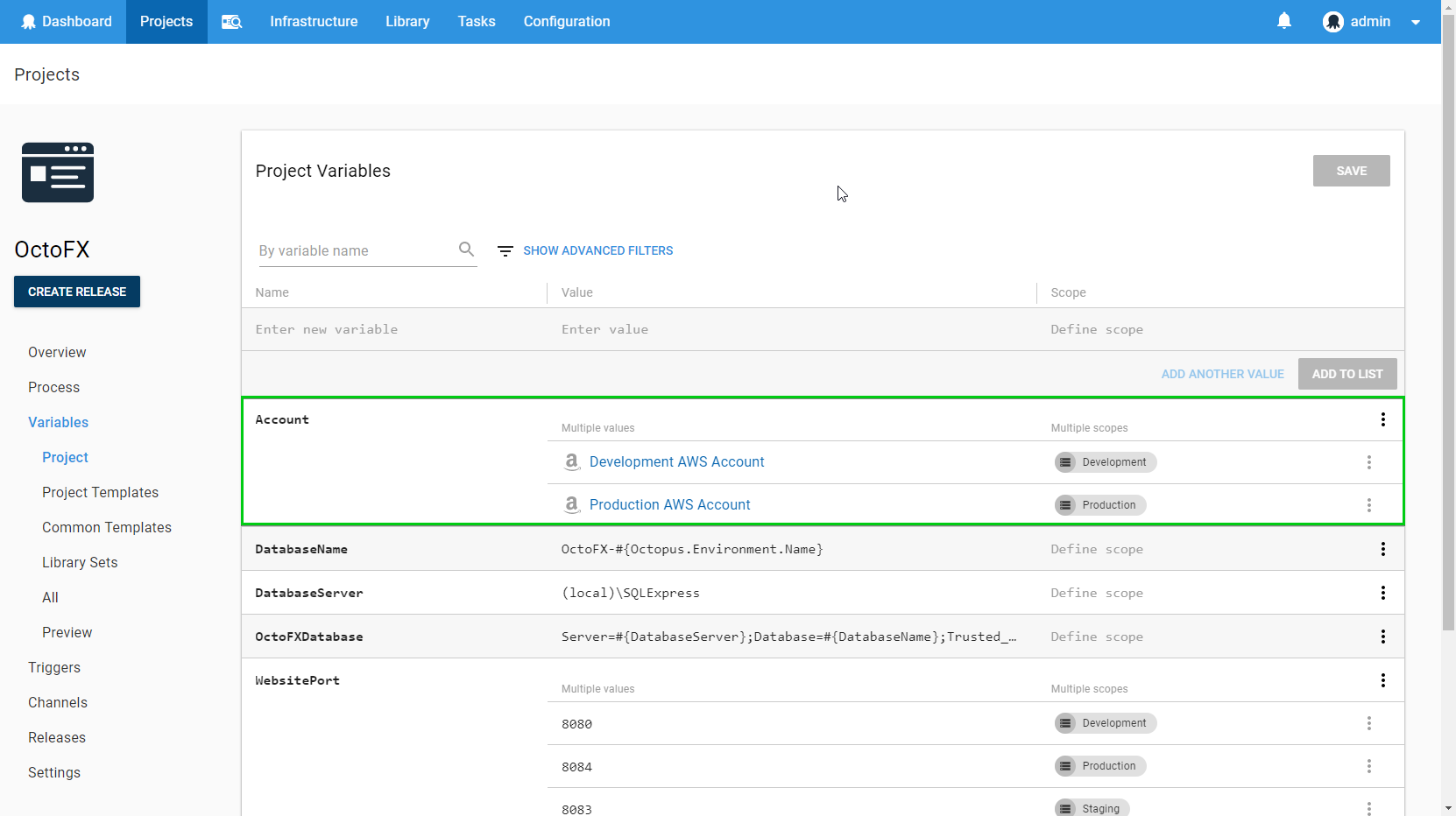 We are starting to think about where the Variable Editor might go next, and the next major project we are thinking about has been internally named the "Variable Unification" project.

There are a few ideas around what will be involved as part of this project, but one thing we would like to do is re-use the Variable Editor when you are defining Tenant Variables. At the moment, we are using a custom Tenant Variables UI component instead, but there is no reason why we couldn't use the Variable Editor in its place. This will solve a number of outstanding performance and usability issues with this part of the UI.

We also want to revisit how variable templates work, and how we can improve the variable experience to give users confidence they have specified all of the correct variables for their deployment. As part of this, we will probably change our variables API to reflect the new model for variables, where a single variable can contain multiple values. In fact, we have just finished refactoring our client side code so that it consistently uses this new model for variables and values.

The Variable Editor has come a long way in the last six months, and this feels like just the beginning of its journey. What would you like to see in the next version of the Variable Editor?