Before we started to build the Octopus Cloud platform, we discussed where it should be hosted. We eventually came down to two choices: Amazon Web Services (AWS) or Microsoft Azure.

From there, we settled on AWS mainly because the majority of the team have prior experience with the service offerings from AWS, rather than any specific technical differences between the two cloud providers.

We had to make a difficult decision: carry on with Docker and Kubernetes after spending a good deal of time and effort, or move to a more traditional tried-and-tested method where each customer would have their own EC2 instance. We decided to go down the EC2 instance path, for the time being. The reasoning in the blog post, Making sense of MVP (Minimum Viable Product) – and why I prefer Earliest Testable/Usable/Lovable by Henrik Kniberg, had a lot of influence on our thinking. We realized we were being too strict on ourselves by trying to develop the perfect product from the very beginning.

One of the first tasks after creating our AWS account was to delete the default subnets and then the default VPC, so that we could create our own with larger netmasks to accommodate a larger number of customers. The idea was to go big, and, with that in mind, we set our production VPC netmask to /16 and the netmask for each of our subnets to /20. Allowing us to accommodate up to 16 subnets per VPC and 4,091 IP addresses per subnet, providing us a total of 65,456 IP addresses.

The design of our VPC and subnets is based on the Scenario 2: VPC with Public and Private Subnets (NAT) example provided by AWS, and it looks like the following: 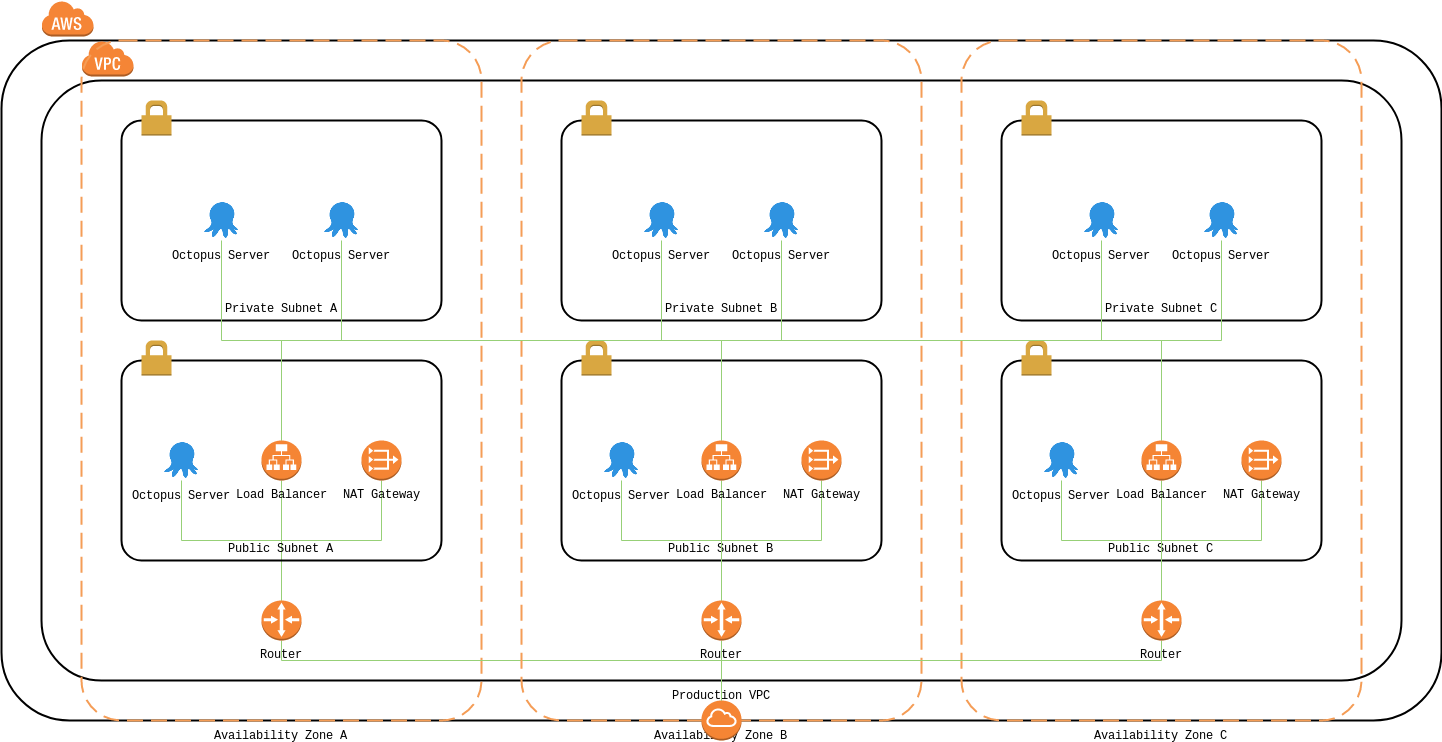 At the time of writing this blog post, the provisioning of Octopus Cloud servers is possible in the Oregon (us-west-2) region on t2.medium EC2 instances without high availability. However, in the not-too-distant future the Sydney (ap-southeast-2), London (eu-west-2), and Frankfurt (eu-central-1) regions are likely to become available, as well as the ability to migrate Octopus Cloud servers from one region to another and add high availability.

To create our VPC and subnets, we used Terraform because of its configuration syntax.

Terraform uses the HashiCorp Configuration Language (HCL) which is meant to strike a balance between human-readable and editable as well as being machine-friendly.

For example, here is a template to provision a VPC with a public and private subnet.

If you would like to compare the above Terraform template to a similar CloudFormation template (YAML), AWS have provided an example here.

Security is paramount for the Octopus Cloud.

We engaged Insomnia Security to perform a penetration and vulnerability test against the Octopus Cloud, and the results were very positive, with no major or moderate risks detected.

We have implemented a strict network access control list (ACL) for our production VPC by allowing the bare minimum protocols and ports required for inbound and outbound connectivity. The same can be said for the security group (SG) attached to each Octopus Cloud server and the firewall.

We have also disabled insecure and weak TLS cipher suites - an Octopus Cloud server only supports TLS 1.2 and TLS 1.1 which means older clients such as Windows XP and older browsers cannot access the UI.

During our closed alpha, closed beta, and usability sessions we found that, while idle, an Octopus Cloud server uses roughly 1% of its CPU; while performing simultaneous deployments, CPU utilization was typically below the baseline level.

Something that did catch us off-guard during our load testing is that we found:

Allowing customers to provision their Octopus Cloud server in an AWS region other than Oregon (us-west-2) has been something that a lot of our customers have asked for. We looked into which regions made the most sense based on:

The Sydney (ap-southeast-2), London (eu-west-2), and Frankfurt (eu-central-1) regions were chosen, and they will become available shortly after we launch the Octopus Cloud.

Following on from supporting additional regions, we will also provide the ability to migrate an Octopus Cloud server between these regions.

High availability is also high on our priority list and is likely to launch after we support the Sydney and London regions.

Something we noticed during our closed alpha and closed beta is that a small portion of our customers created their Octopus Cloud server with words like test, demo, and sandbox as part of their subdomain. This got us thinking about scenarios where a customer would want to change their subdomain, and that feature will definitely become available in the near future.

We haven't given up on Docker and Kubernetes. We believe that these technologies will allow us to provision Octopus Cloud servers faster, add an extra layer of security, and help us make good use of co-tenancy for cost savings.