When I started automating database deployments, I was afraid the tooling would drop a column or table when it shouldn’t. I couldn’t help but always wonder, did I have everything configured correctly? The core problem is I didn’t include the necessary steps to build trust in my database deployment process. In this blog post, I walk through some techniques and configurations I used to help build that trust so I can automate my database deployments with confidence.

Assume zero trust on day one

This article focuses on how to build trust in the deployment pipeline using database tooling with Octopus Deploy.

When designing and implementing an automated database deployment process, I start with this mindset:

I need to prove to myself, and everyone on my team, that a deployment will NOT result in data loss or a production outage.

In this article, I create an automated database deployment process from scratch. Each section builds on the previous section by leveraging a new feature in Octopus Deploy. I realize it is easy to lose track of each feature, so to make things easier, here is a list of features this article will use:

If we had total trust in the process, we would only need the deployment step. Let’s start there.

Right now, this process will take the scripts in the package and run them on the database. It’d be nice to know what those scripts are. Let’s add a step to generate a delta script or report.

The Create Delta Report step has this line at the end of the script, which uploads the script to Octopus Deploy as an artifact:

The method for creating a delta report will vary based on your database deployment tooling. Please consult the tooling’s documentation to find out how. In some cases, our docs have examples that you can leverage.

During a deployment, that artifact will appear in two places on the screen. 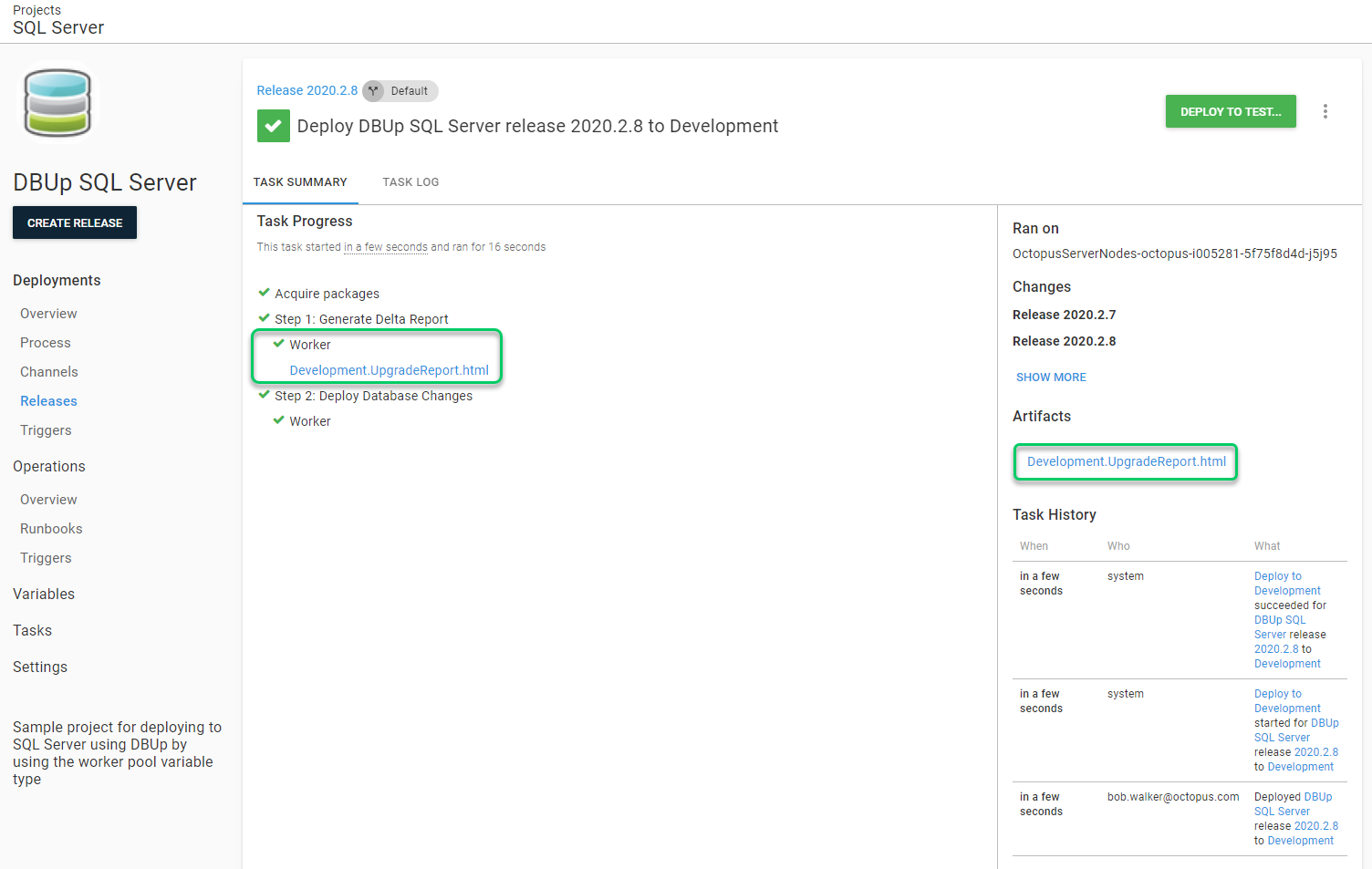 Clicking on either of them will download the artifact.

Now we are getting somewhere; we have a delta report which will be kept as long as the release exists for anyone (including auditors) to download and review.

But what if the delta report shows a script with a command like drop table or drop column? Is that okay? Maybe, maybe not. It doesn’t make sense to reject the script outright. It makes more sense to pause the deployment, review the scripts, and if something doesn’t look right, find the person who created the script and discuss it with them. To do that, we can add a manual intervention.

An interesting thought comes up when creating a manual intervention. A team must be selected. I know what you’re thinking. “The team should be DBAs!” This step is going to run for all environments. When should a DBA review changes? They are busy keeping the database servers up and running. Having to review every delta script for every deployment would be a full-time job.

Putting two teams, developers and DBAs, won’t work because that means a developer OR a DBA could approve the deployment. That’s acceptable for the Development and Test environments but not Production: 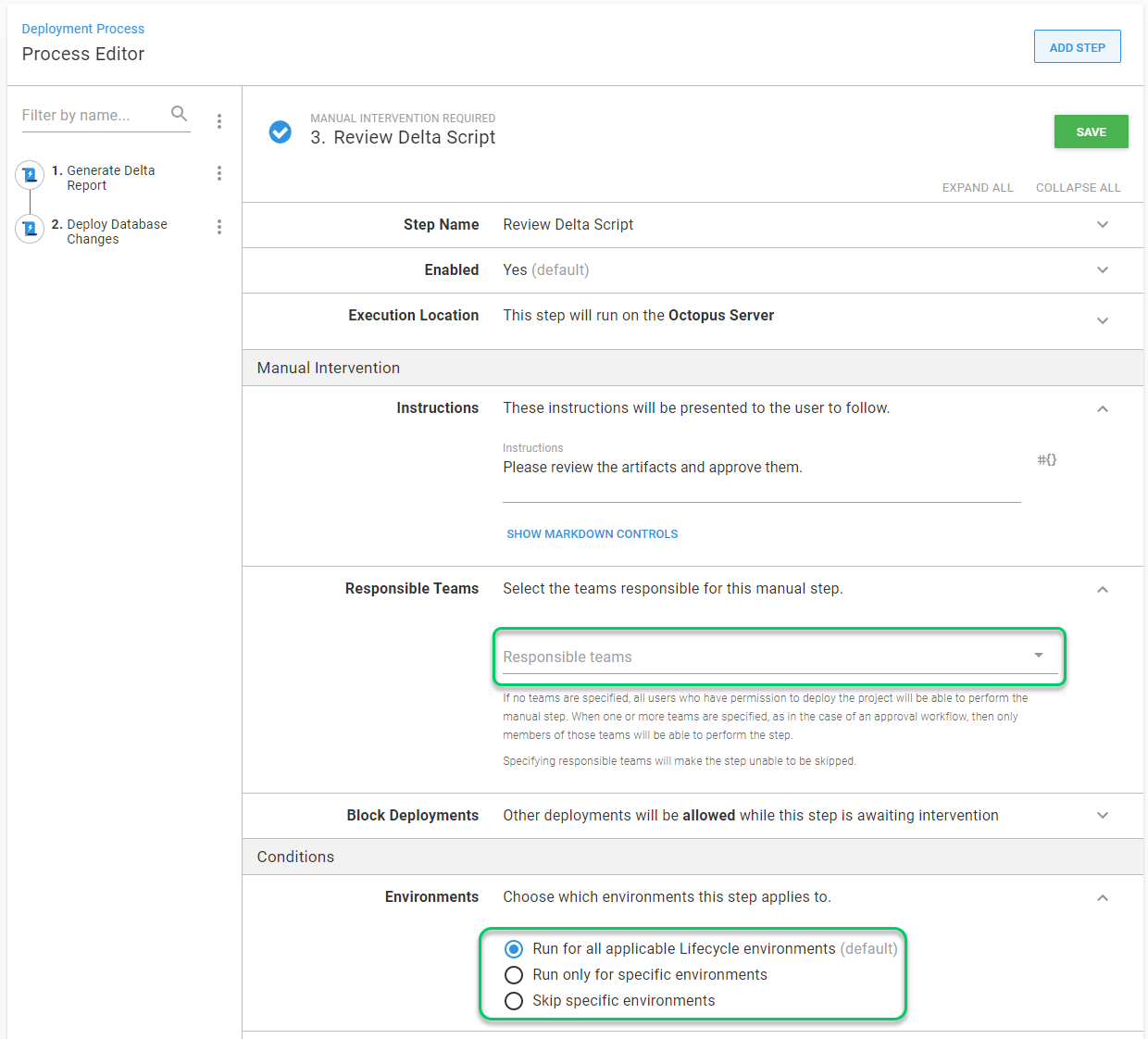 I like to add the Octopus Managers team to all manual interventions. This way, they can take responsibility in the event of an emergency if all the DBAs are unavailable. 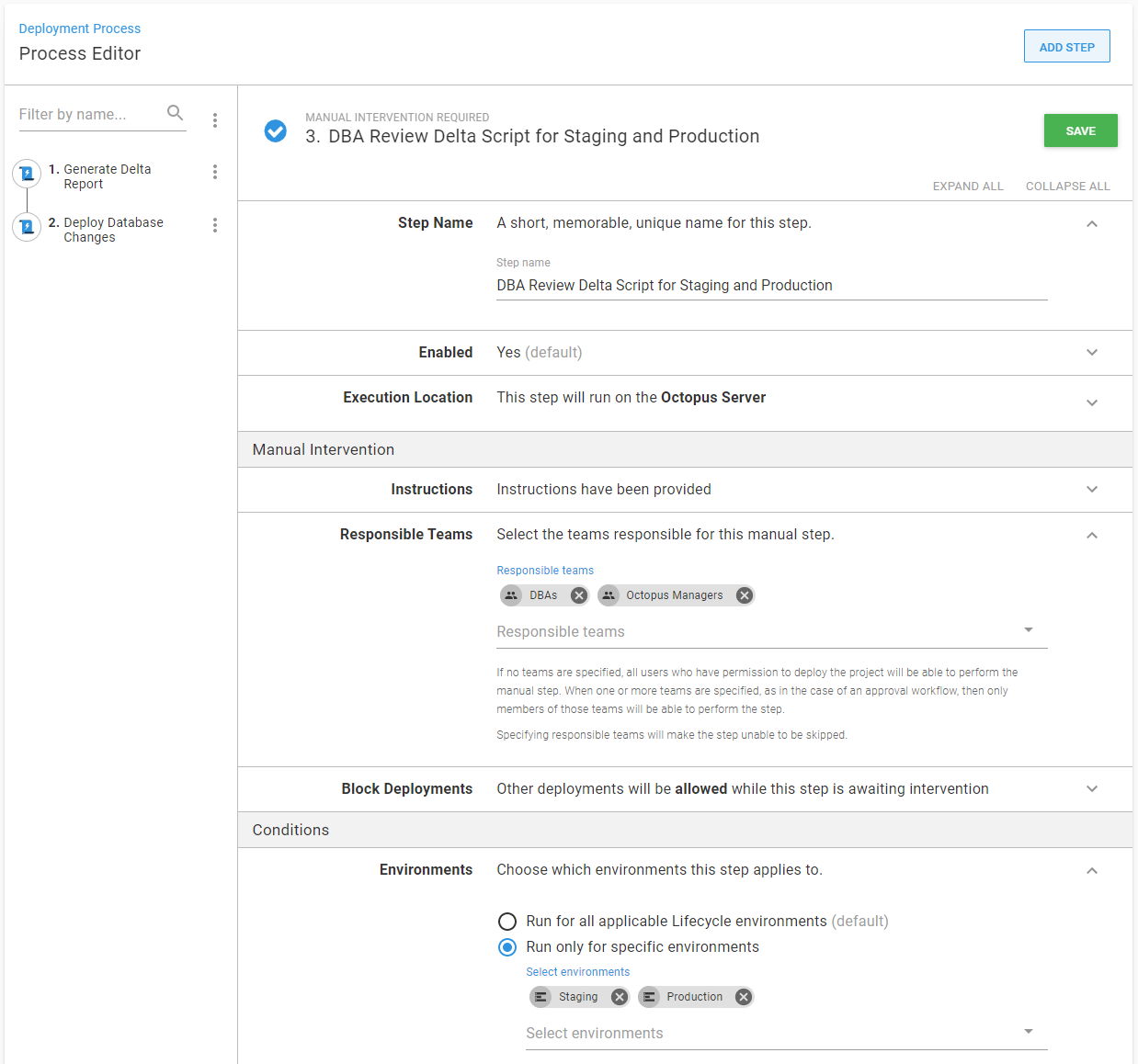 The resulting deployment process will have two manual intervention steps. 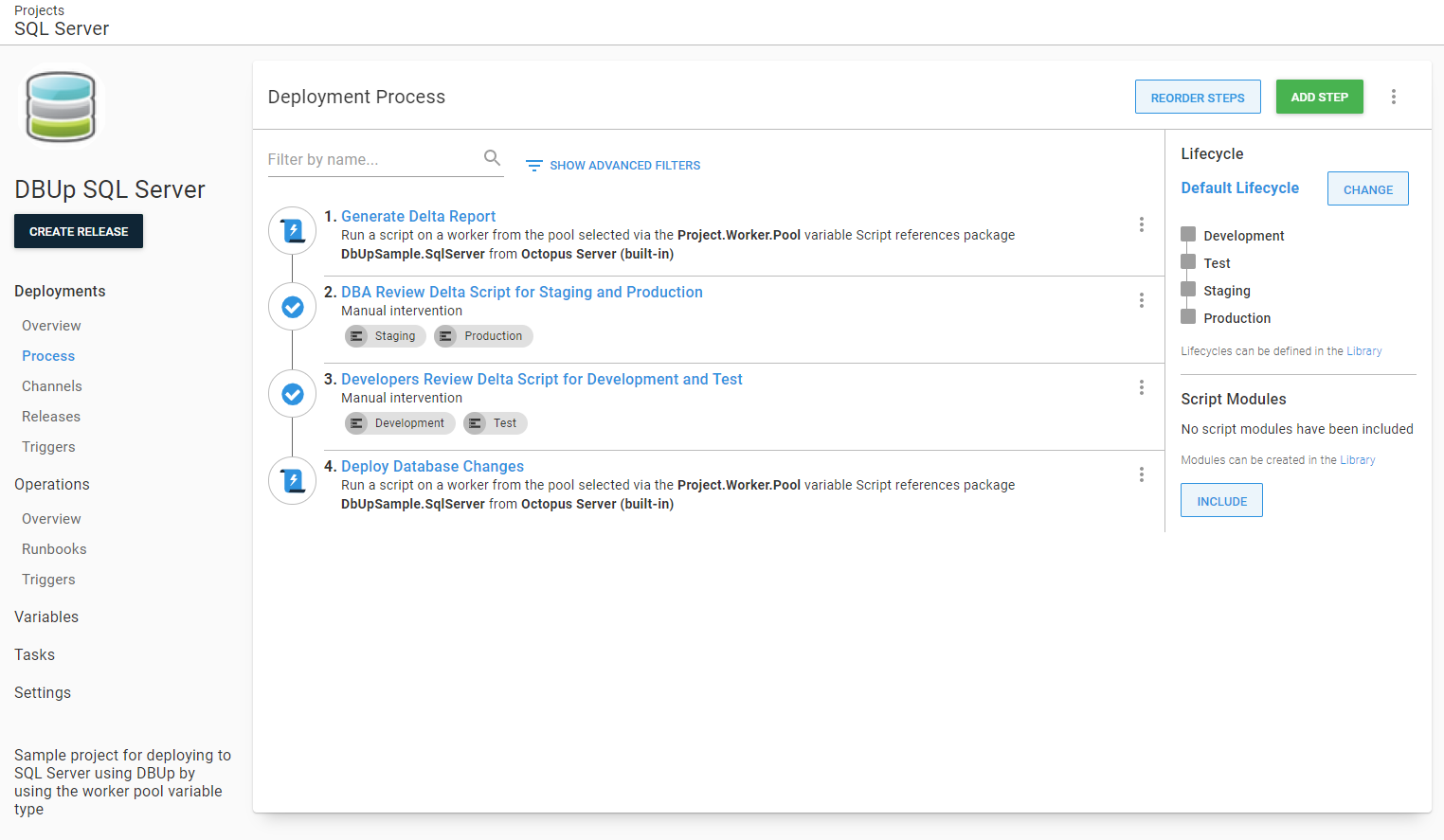 In my experience, the ability to pause and review the delta script before it runs goes a long way in building trust. If the approver sees something they disagree with, they can abort the deployment. Even better, the person who took responsibility for the approval is in the audit log. We can see I started the deployment as well as approved it (which outside of a demo/test environment is a big no-no). 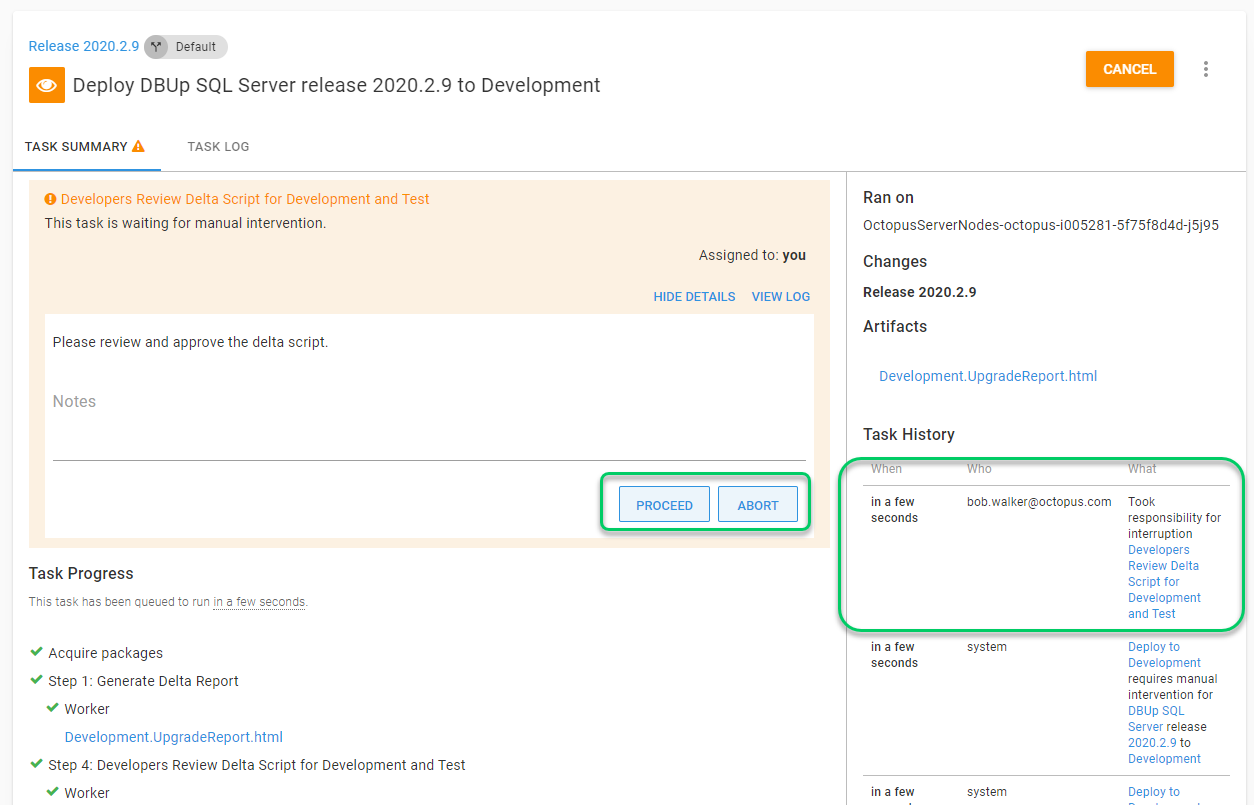 Chances are DBAs are not watching Octopus Deploy all day, every day. They need to be notified about the approvals they are responsible for. But what should they do after they approve a deployment? Watch it finish? That could take quite a while. That doesn’t seem like a productive use of their time. And if the deployment is successful, they probably don’t need to do anything else. A failed Production deployment is a pretty big deal; they should be notified.

For this example, I include the email notifications directly in the process. You can also leverage the subscription feature in Octopus Deploy.

The initial fields in the email form are fairly straight forward. The subject and body are what caused me to pause. The DBAs might be getting dozens of these emails a day. It should be very easy for them to approve the deployment, so the subject line should include details about the deployment. If something doesn’t look right, they can forward you the email and provide their feedback. The body should include a deep link for the approver to click on. 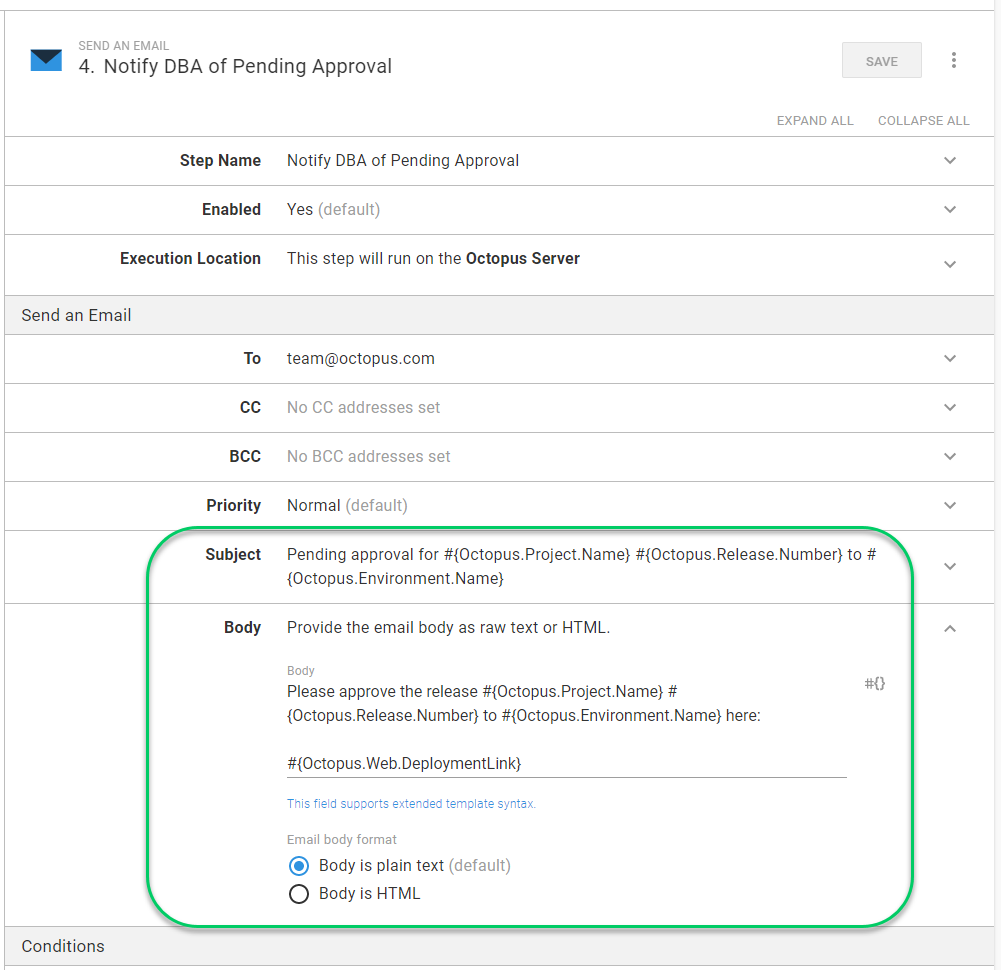 Retyping what is in a screenshot is not fun. Below is the text for the subject and body.

The failure notification is a bit different. The priority of the email needs to change from normal to high, and the run condition should be configured only to run the step on failure. 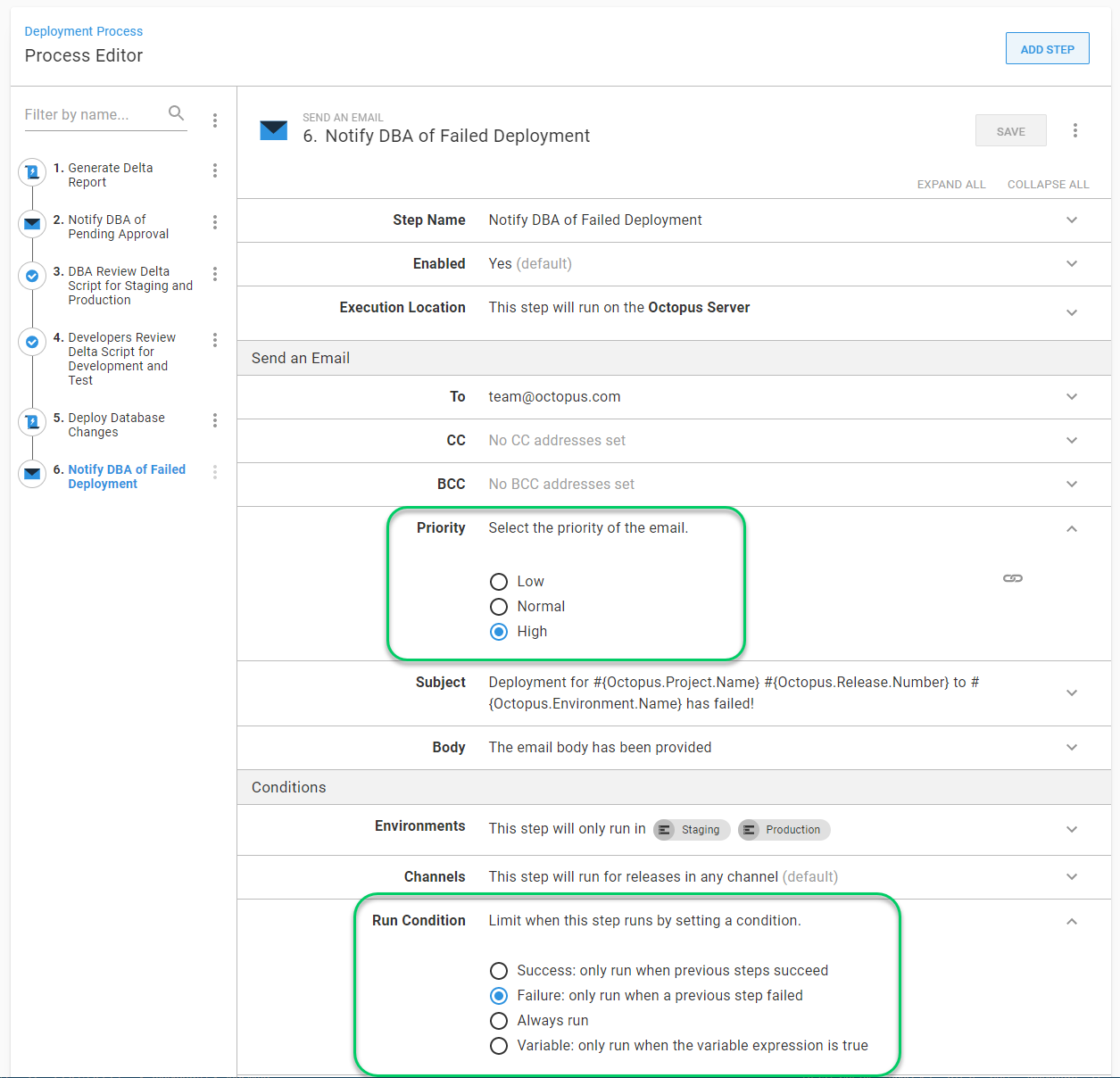 This example uses email notifications, but you can also leverage other tools such as Slack, Teams, VictorOps, and more.

Finally, the team responsible for the application should always be notified of the status of the deployment. If the deployment team uses Slack, we can drop a similar message in their Slack channel. This example uses the Slack - Send Simple Notification step template from the library. 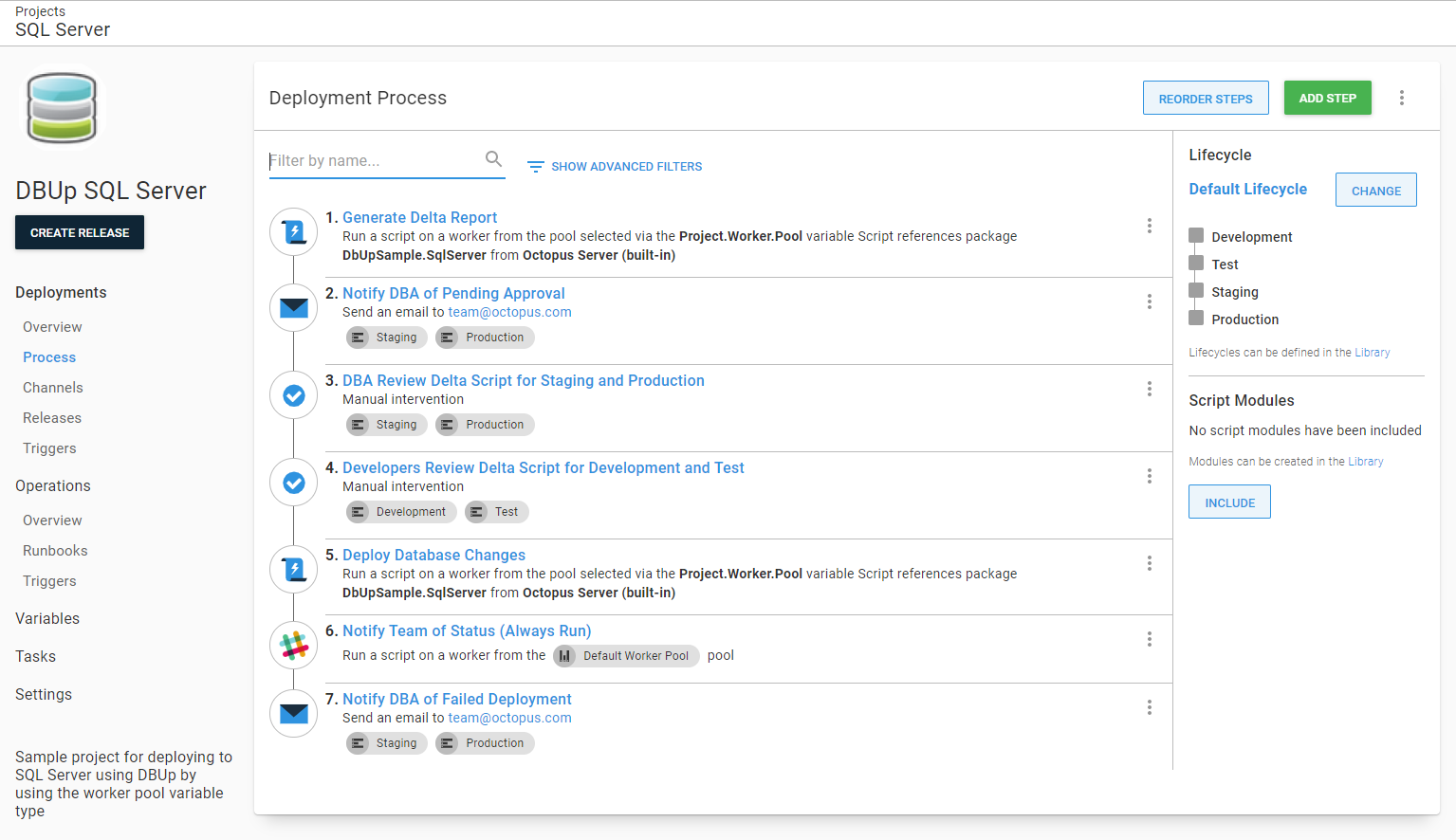 Now we have notifications going out to key people. Typically, key people are also busy people; don’t be surprised if you need to dial in the notifications to keep the signal to noise ratio down.

As time goes on, the number of deployments the DBAs have to approve will exponentially grow. It is the nature of automation. When teams feel comfortable with the tooling and trust the process, they will naturally do more deployments.

More deployments are a double-edged sword; the downside is there’s less time available to review database changes. A DBA or developer could miss a schema change that causes significant damage, but this process should help them. Thankfully, Octopus Deploy is an API first application, using the API it possible to download the delta report or SQL artifacts to find any potentially damaging statements:

When certain commands are found, the script will leverage the Write-Highlight logging command provided by Octopus Deploy. The message will appear in the deployment log. 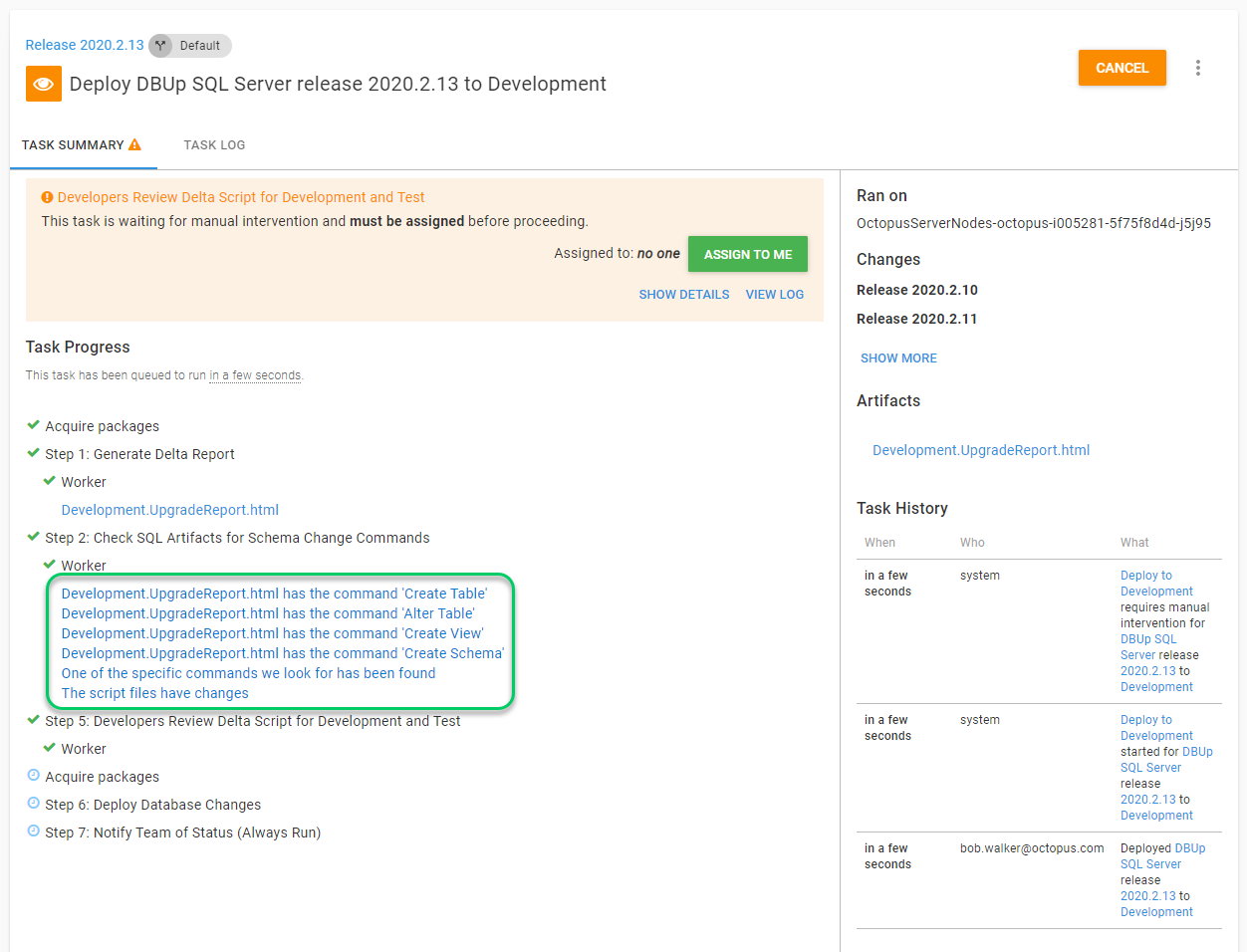 Seeing those messages should hopefully make it a little easier on the approver.

Errors and failures will happen. A number of them occur because of something out of the control of Octopus Deploy, for instance, a network failure, an SQL Server restart, incorrect permissions, and missing accounts are amongst the most common. After the issue is fixed, it would be much better just to try the failed step again and prevent unnecessary rework. If a DBA already approved a script, they don’t need to approve it again.

Guided failures was designed for scenarios like this. Guided failures can be enabled per project or per environment. For this example, it is enabled at the project level: 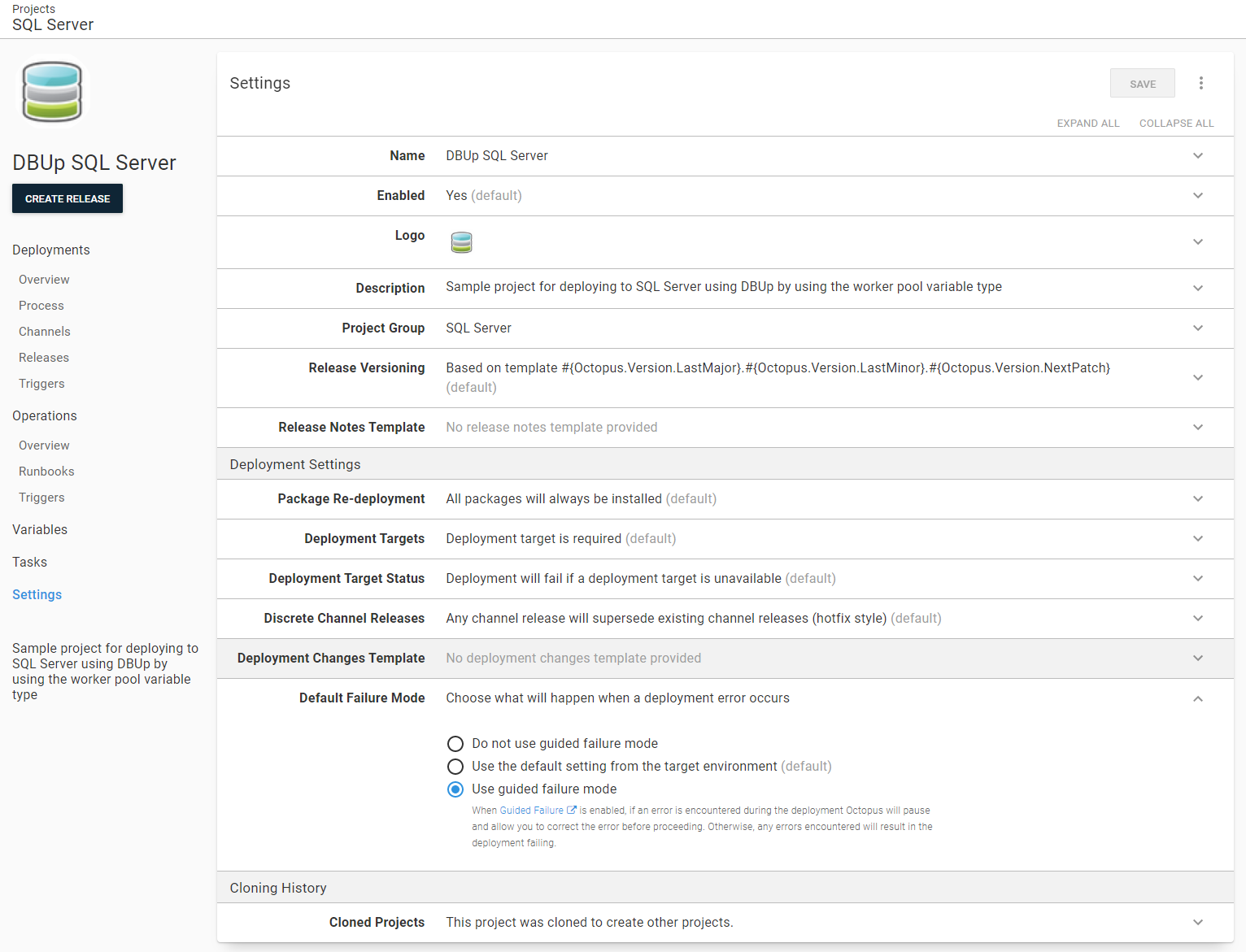 Just like a manual intervention, the deployment will pause when a failure is detected. Octopus Deploy provides the option to Fail, Ignore, or Retry the step. 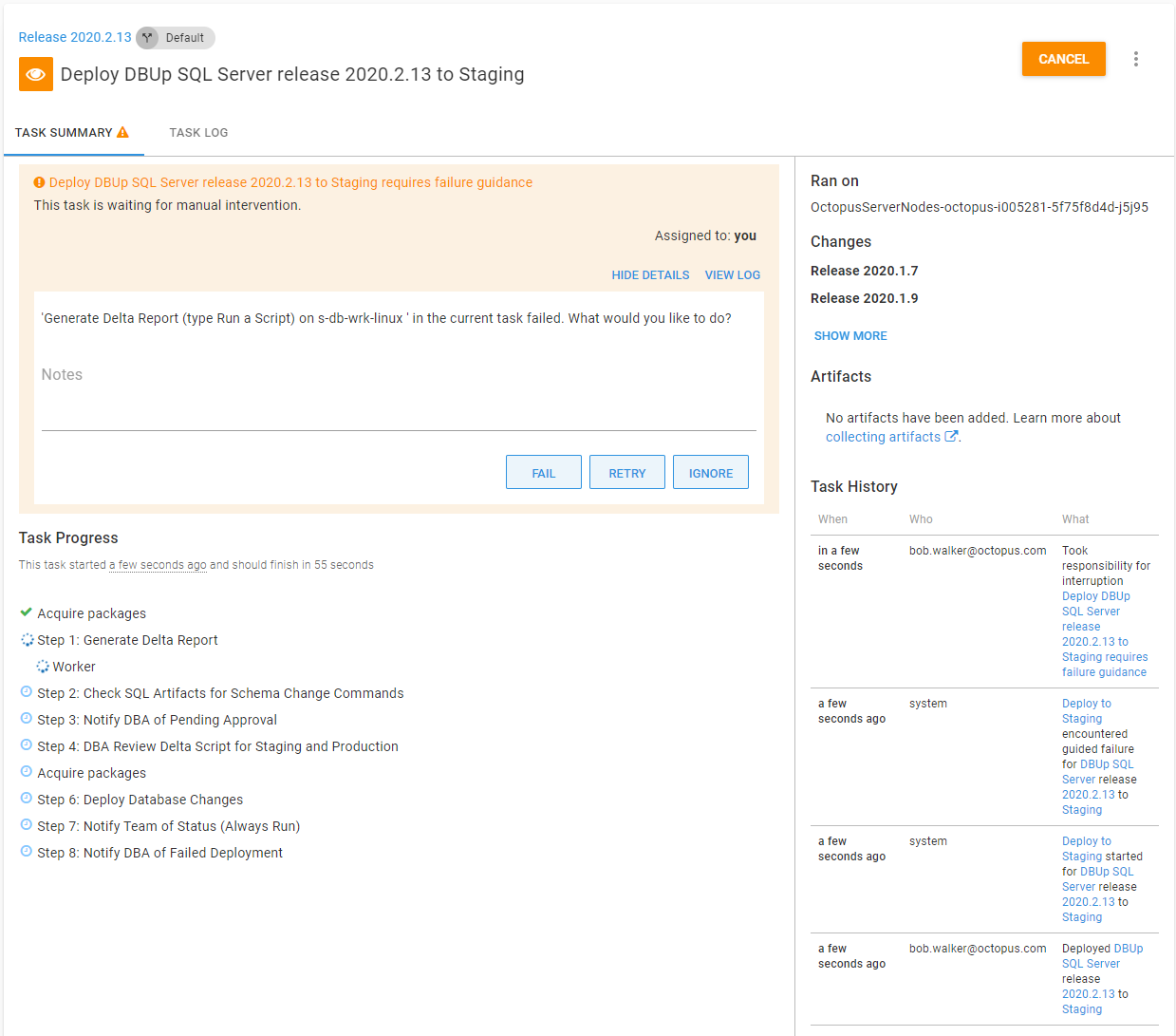 With this small change, we have given the users the chance to handle failure gracefully.

Separation of concerns is a common practice. The person who made the code change shouldn’t be the person who approved it or deployed it to Production. Note, developers should be able to deploy to Development and Test, and in Octopus Deploy, it is possible to configure the teams to support this.

There are five roles that help achieve this in Octopus Deploy. 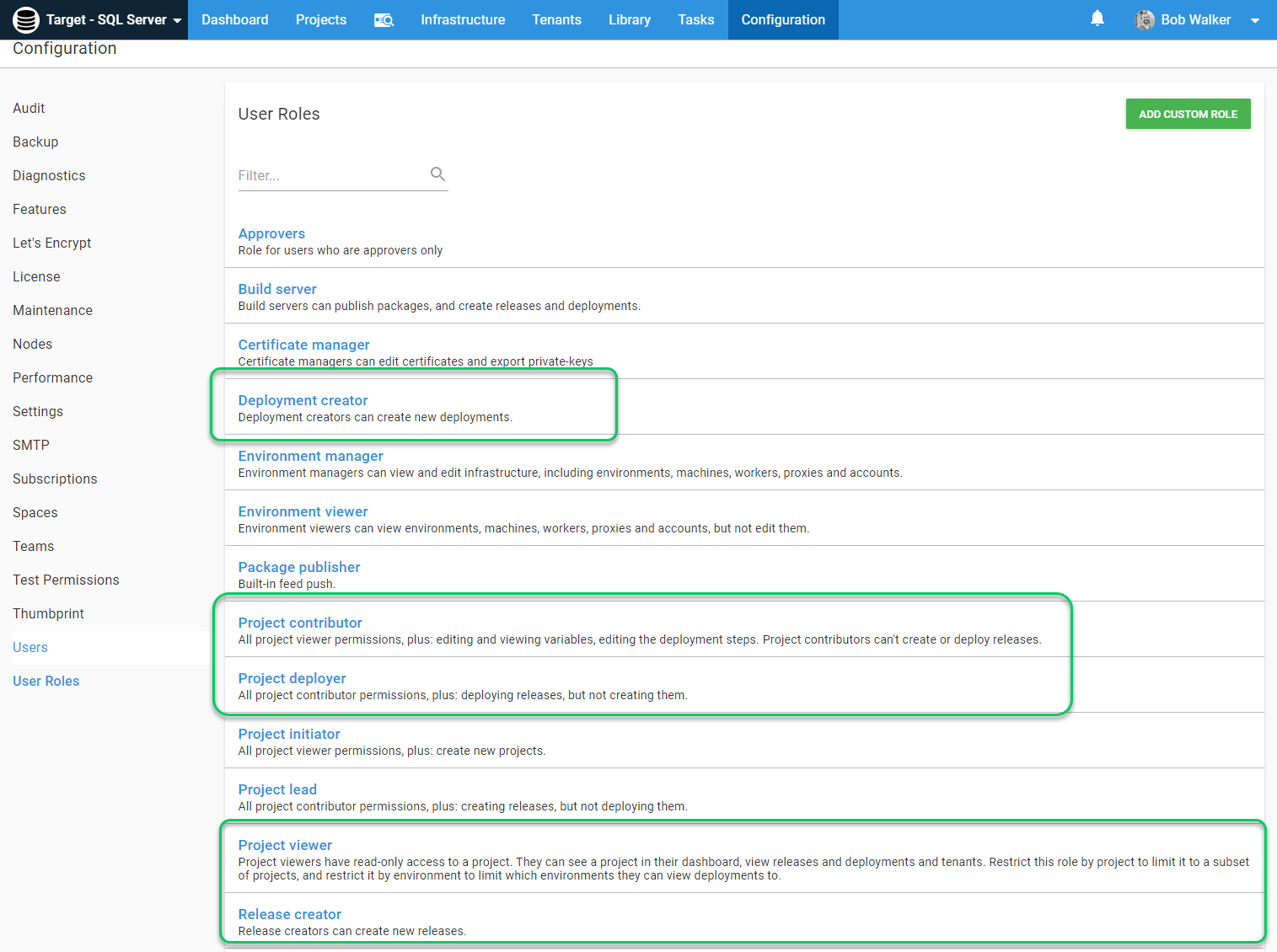 The developer team user roles will be:

The DBA’s permissions will be:

Adjusting the DBAs’ role in the process

With those permissions, the DBAs’ role in this process is still a bit odd. They are the ones who trigger a deployment to Production. Should they also have to manually approve the deployment as well? At first blush, it makes sense. They should approve a Production release.

Here is the real question: how often has a development team changed something during a Production deployment because a DBA found something they didn’t like?

The answer is probably never. When an outage window has been communicated to users and customers, the Production deployment is too late for a DBA to voice their concerns. Unless the DBA can say with 100% certainty a problem is going to happen, the production deployment will proceed.

A Production deployment is too late for a DBA to be involved. A much better approach is for a delta script for Production to be created during the Staging deployment. That way, the DBA can approve both of them at the same time. 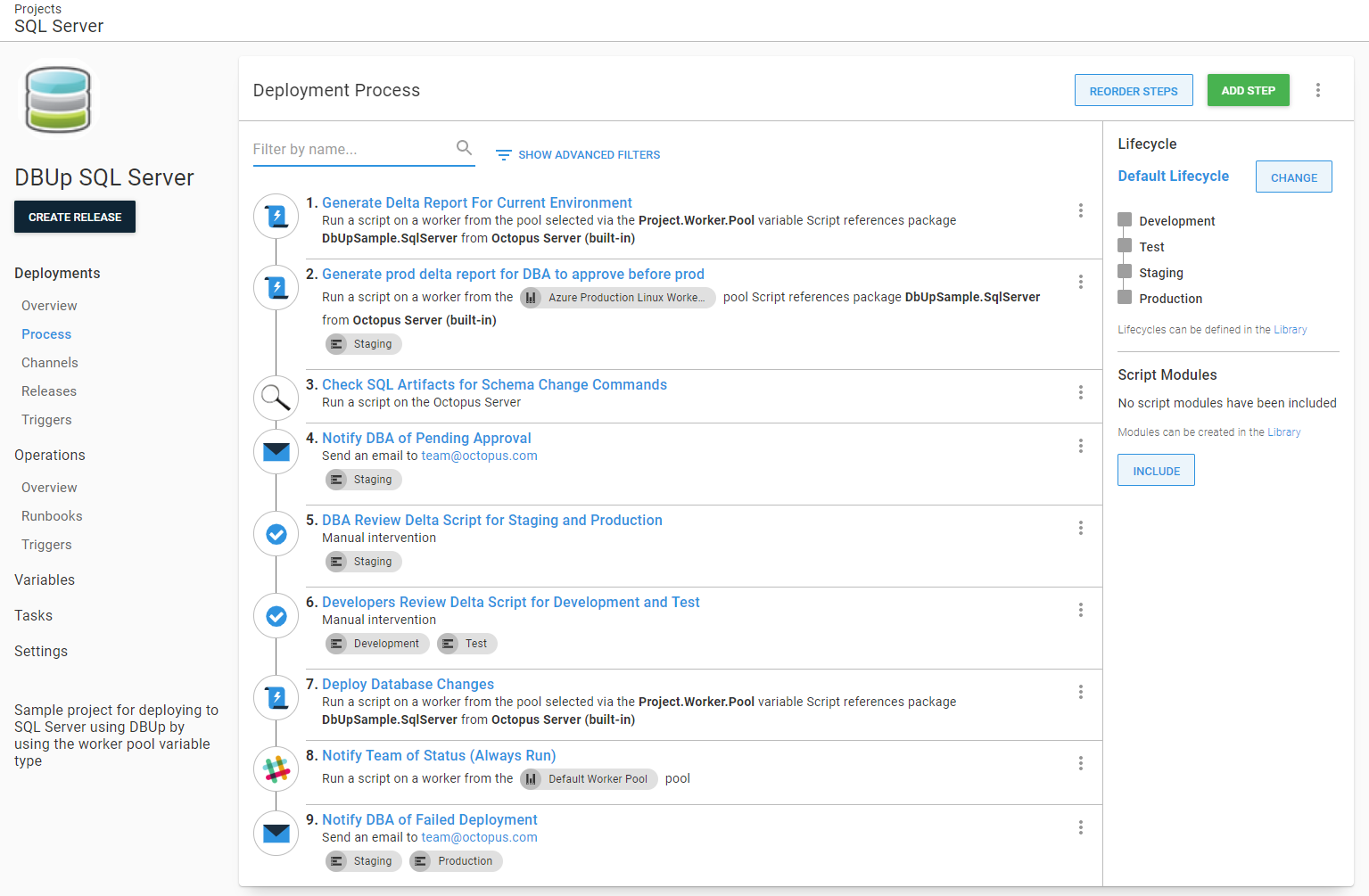 When the DBA creates the Production deployment, they can also review the delta report generated during the Staging deployment. The added bonus is the DBA can now schedule the deployment, and they don’t have to be online. 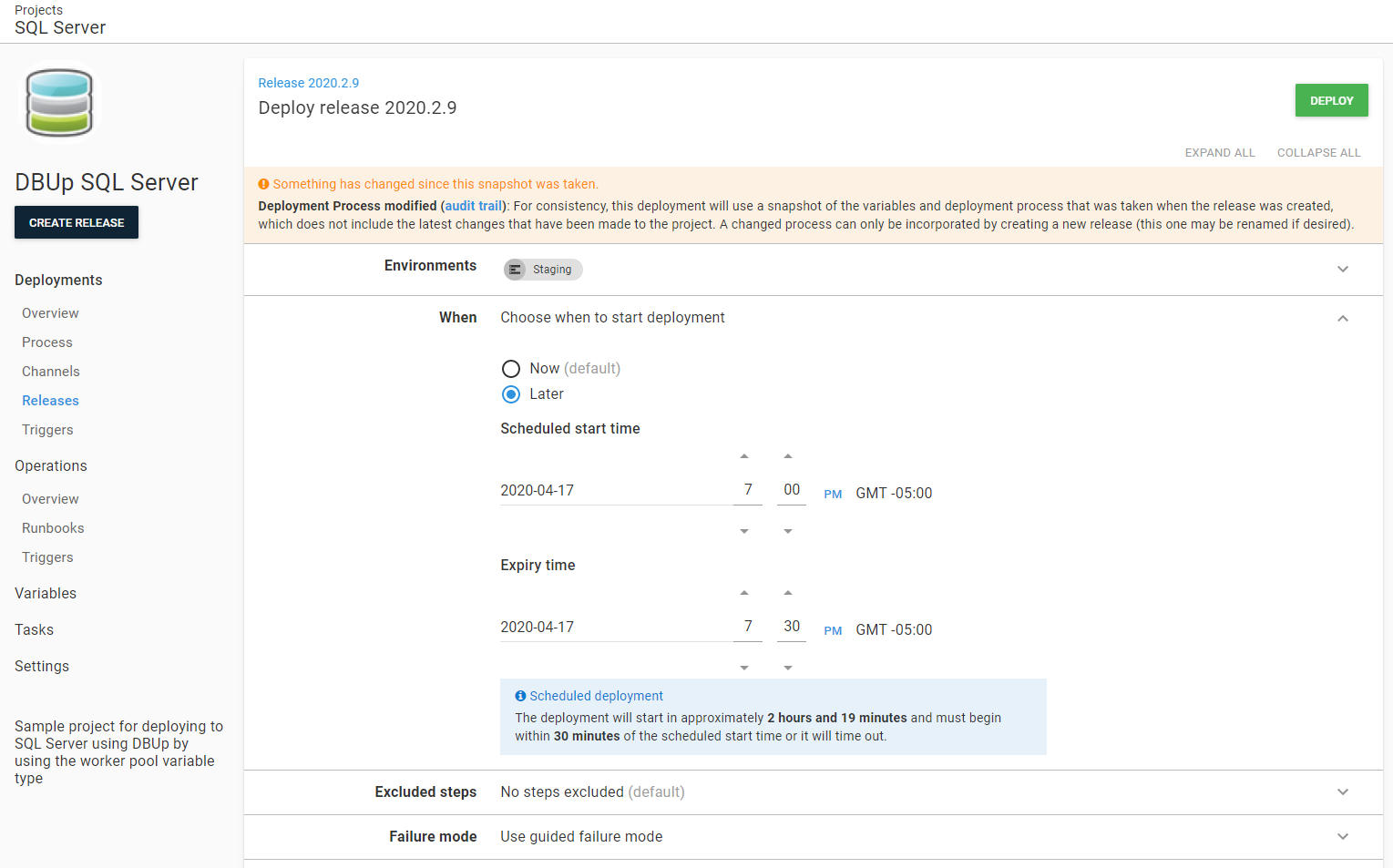 That being said, don’t expect the DBA to schedule deployment and not be online when you start out. It will take quite a number of deployments before they trust the team, trust the process, and trust themselves to understand the tool.

It isn’t wise to remove those notifications and approvals. Something damaging could slip through the pull request process. The process has a step that automatically finds potential problems, Check SQL Artifacts for Schema Change Commands. That script can be modified to set output variables. If a potentially damaging command is found, then the deployment must go through the approval process:

Output variables are a bit verbose. To make them easier to use, set another variable to the result.

In the notification and manual intervention steps, the variable run condition can be set to be: 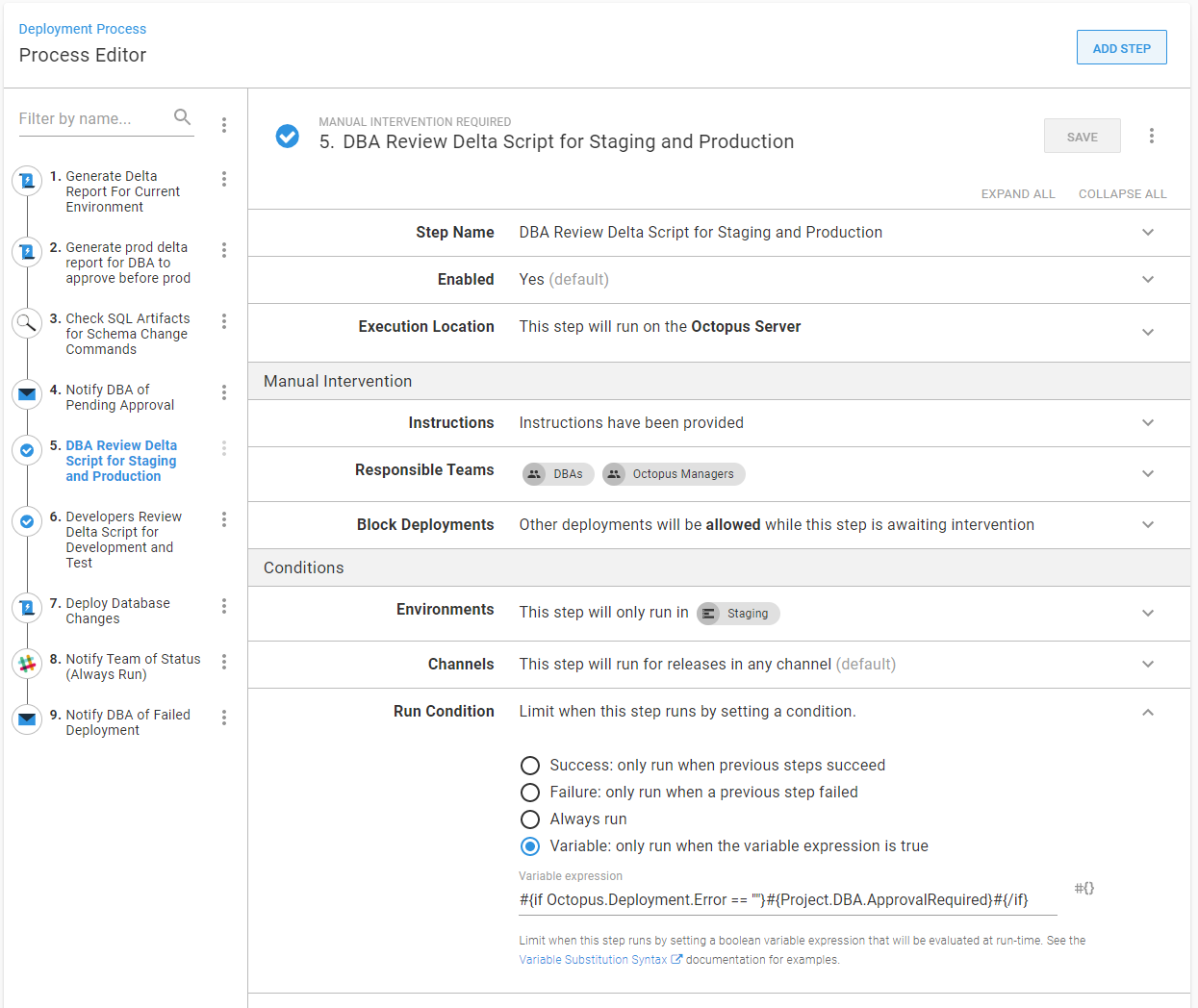 One flaw in this process is it assumes developers don’t go into the deployment process and disable or delete the manual intervention steps. Trust, but verify is our recommended approach.

This video also outlines a process to automatically audit your projects.

Finally, you can configure subscriptions to notify admins when changes are made.

At the start of the article, I set this goal:

I need to prove to myself, and everyone on my team, that a specific deployment will NOT result in data loss or a production outage.

The process created in this article helps achieve that goal by doing the following:

I implemented something similar while working at previous companies. It was much better than the previous process, which was an email saying, “Please run these SQL scripts.” I felt confident about the database changes going out, and eventually, the DBAs did too. It got the point where they would say “I’ll schedule it for 7 PM, I won’t be online, but if anything goes wrong it’ll page me, and I’ll hop on.”

I am not naive enough to believe this will solve all the potential trust concerns. The process isn’t perfect; for example, it doesn’t integrate with a Production Change Request system, and it doesn’t integrate with issue trackers. While important, I felt those items muddied the waters for this article. My goal for this article was to provide tips and techniques for you to feel confident in starting your own POC or Pilot for automated database deployments.

The deployment process from this article can be found on our samples instance.