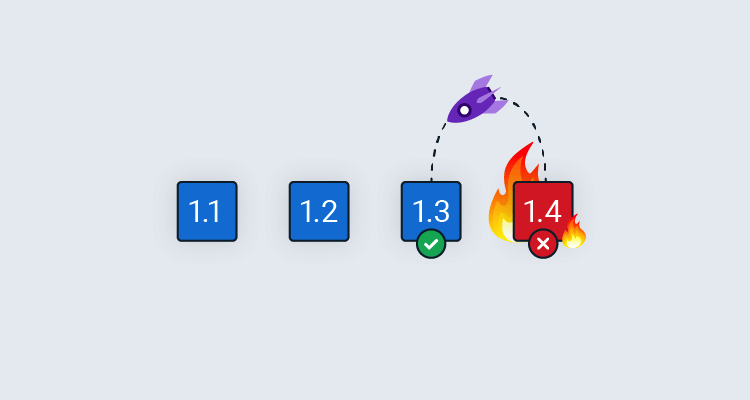 When discussing rollbacks, the conversation inevitably turns to blue/green, red/black, or canary deployment patterns. Those patterns make rollbacks easier, however, they're time-intensive to implement, and sometimes they're not necessary. Maybe you pushed out an API change to Test, and you want to get back to a known good state. That's not when you should attempt to implement those patterns for the first time.

In this post, I walk through a rollback strategy you can execute today, without implementing advanced deployment patterns.

Out of scope
Rolling back database changes are out of scope for this post because doing them successfully is a complex topic with many pitfalls. This post focuses on code-only rollbacks. It demonstrates how to skip database deployment steps during a rollback. In practice, code and UI changes are much more frequent than database changes, especially in a test environment. Most schema changes happen at the start of a new feature, with minor tweaks during testing.

What is a rollback?

This post will help you modify your existing (working and tested) deployment process to support rollbacks.

The goal of a rollback is the same in both scenarios; quickly return the application to a known good state.

Many customers focus on the production scenario, yet the test scenario occurs more often and has a bigger impact. If you follow Octopus Deploy's core rule of build once, deploy everywhere, the chance of a show-stopping bug making it to production is rare. However, test is different; there's a mindset that only a few people are affected, but that's untrue because deadlines will slip if QA is blocked for hours at a time.

The goal is to get back to a known good state, but that's different from a deployment. Skipping specific steps can make rollbacks faster. Many deployment processes are created assuming none of the dependent software or infrastructure has been configured. For example, a deployment process could trigger a runbook to create a database if it didn't already exist; or install the latest version of Node.js. During a rollback, those additional steps aren't needed. If you check the database existed when deploying 2021.2.3 of your application, you won't need to check again when rolling back to 2021.2.1.

A rollback is getting back to a known good state by running a modified version of the original deployment process.

Rolling forward or rolling back

Not all releases can and should be rolled back. The scenarios above mention a fix is hours or days away. Often, rolling forward is less risky and time-consuming. A minor fix can be easier to test and deploy than rolling back a major release.

Here are some typical reasons why we recommend rolling forward:

There are several scenarios when a rollback can be the right solution though. A legacy monolith application with a large database can be successfully rolled back in specific circumstances. Some of these scenarios include:

While we recommend rolling forward, having a rollback process in place is a valuable option in your CI/CD pipeline, even if a rollback occurs once a month.

Many years ago, a few hours after a production deployment, I was informed about a show-stopping bug. I was surprised as the release had gone through weeks of verification by QA. We couldn't establish the cause and concluded a rollback was needed - the first in years.

The rollback plan in the deployment document was: "rollback to the previous version of code". Unfortunately, that's not a detailed plan. We escalated the issue, and paged everyone involved with the release (from QA, to business owners, and managers).

We created a new rollback plan from scratch. Despite a new plan, we estimated the odds of a successful rollback at 10%. It was a no-win situation. We had a show-stopping bug we couldn't repro (and therefore fix), or we could roll back and take our chances.

Rolling back offered some chance as opposed to none though. Each person was assigned a task. I went through the changelog, item by item, and documented the impact of rolling back.

Fifteen minutes before we needed to make the final rollback decision, I discovered a block of code that looked suspicious. My tests to hit that block of code established it was the culprit.

We aborted the rollback plans, implemented a fix, and pushed the fix out later that day. We were relieved we didn't have to test an unproven rollback process.

This story highlights the importance of testing your rollback processes multiple times. Ideally, it should be tested and verified weekly. During a production outage, the last thing you want to do is develop a new rollback process or run an untested one.

Now I explain how to update an existing deployment process to support rollbacks.

I chose OctoFX sample application for this example because it's similar to many applications I see and work on. It has the following components:

The deployment process for this application is: 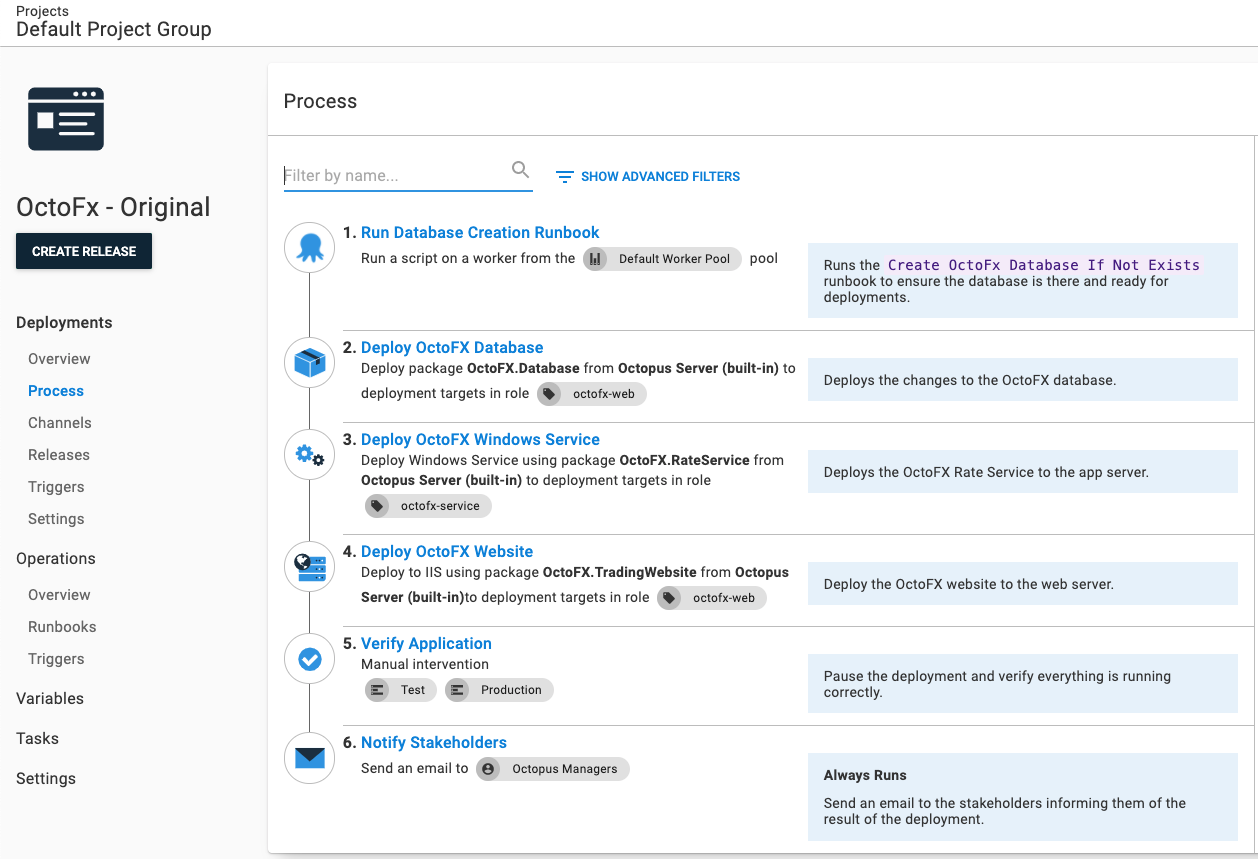 Your database platform, back-end service, and front-end might be using different technology. In this post, I update the process to skip specific steps and run additional steps during a rollback.

The core concept of my rollback process is redeploying a previous release. You can do that by:

Selecting the release you want to redeploy to your target environment. In my example, I redeploy 2021.9.9.3 to Test. 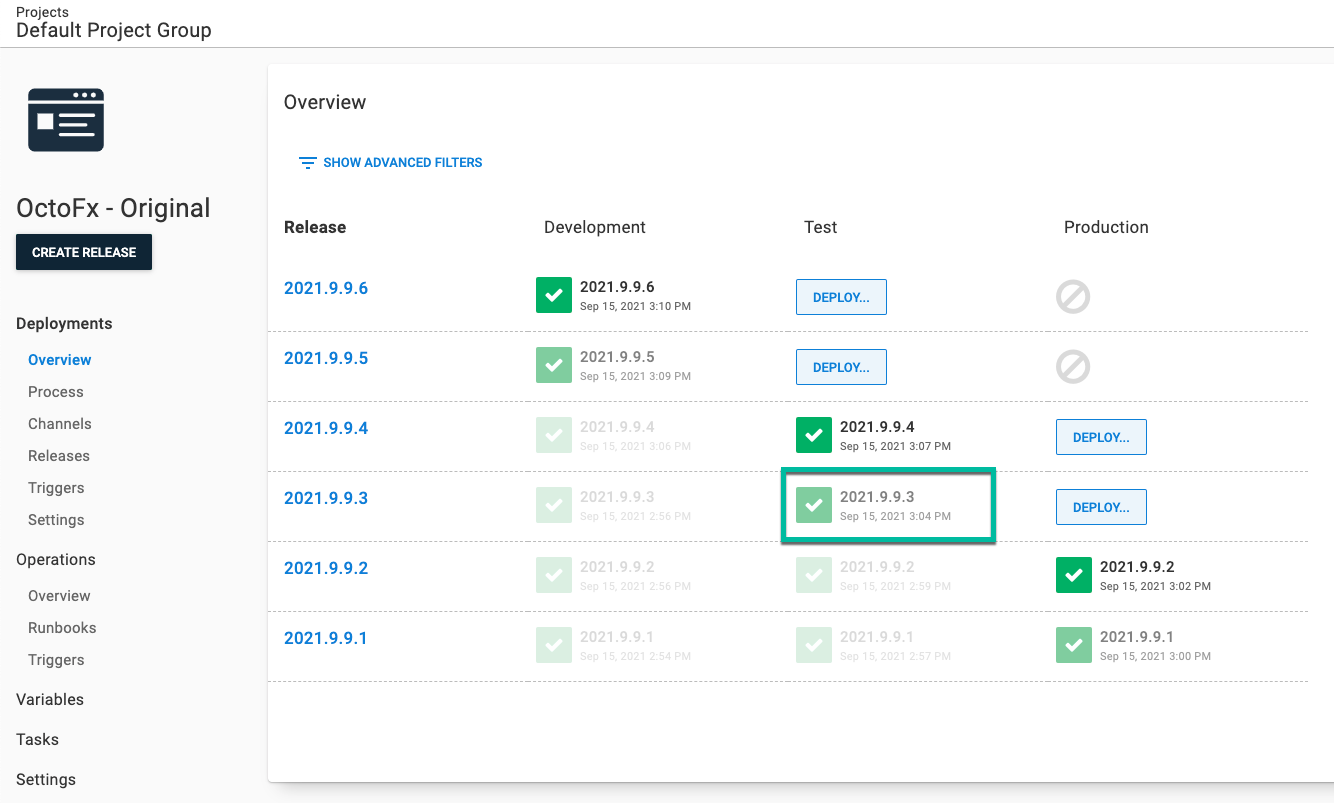 You'll be sent to the deployment screen. Click DEPLOY to start the redeployment.

Redeploying a previous release as-is means all the steps from the previous deployment will re-run. As mentioned, a rollback's goal is to get back to a known state by running a slightly modified deployment process.

Your rollback process will be different from the example; I use the database steps as the example. The goal is to show you how to disable the steps, rather than what is being disabled.

To disable specific steps for a rollback, we need to know a rollback is occurring. But we are going to redeploy an existing release. Redeploying the same release to the current environment is a valid use case though. What we need to know is the "deployment mode".

A rollback will skip the first two steps.

For my application, I only redeploy when the web farm is scaled out. I never scale out the app servers or database. I only want to deploy the website and notify the stakeholders.

We need the ability to calculate the "deployment mode". Octopus provides the system variables:

I created the step template, Calculate Deployment Mode, to perform the calculation for you. Using that result, it will set several output variables.

The variable run condition when the deployment mode is Rollback with all the necessary error handling is:

I added the following output variables with the necessary error handling and comparison logic to make that easier.

With those output variables, the syntax for that same Rollback run condition is:

I mentioned an additional step I want to run during a rollback. One example is blocking the release progression. A rollback, even in a test environment, is a significant event. If a release has multiple bugs, you don't want it to move on to the next environment in the lifecycle. 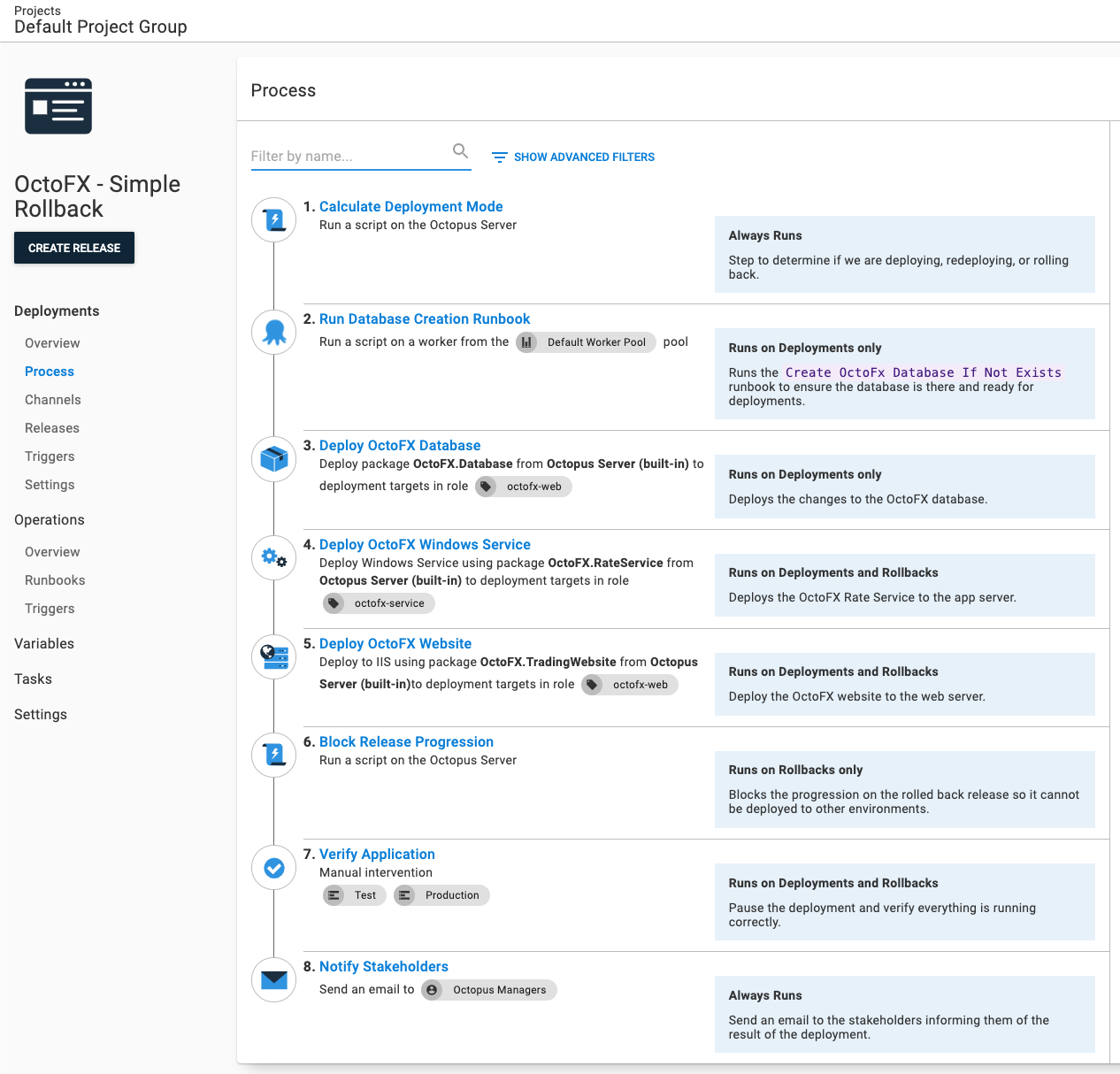 Use the step Notes feature to indicate which step runs during deployments, rollbacks, or always. 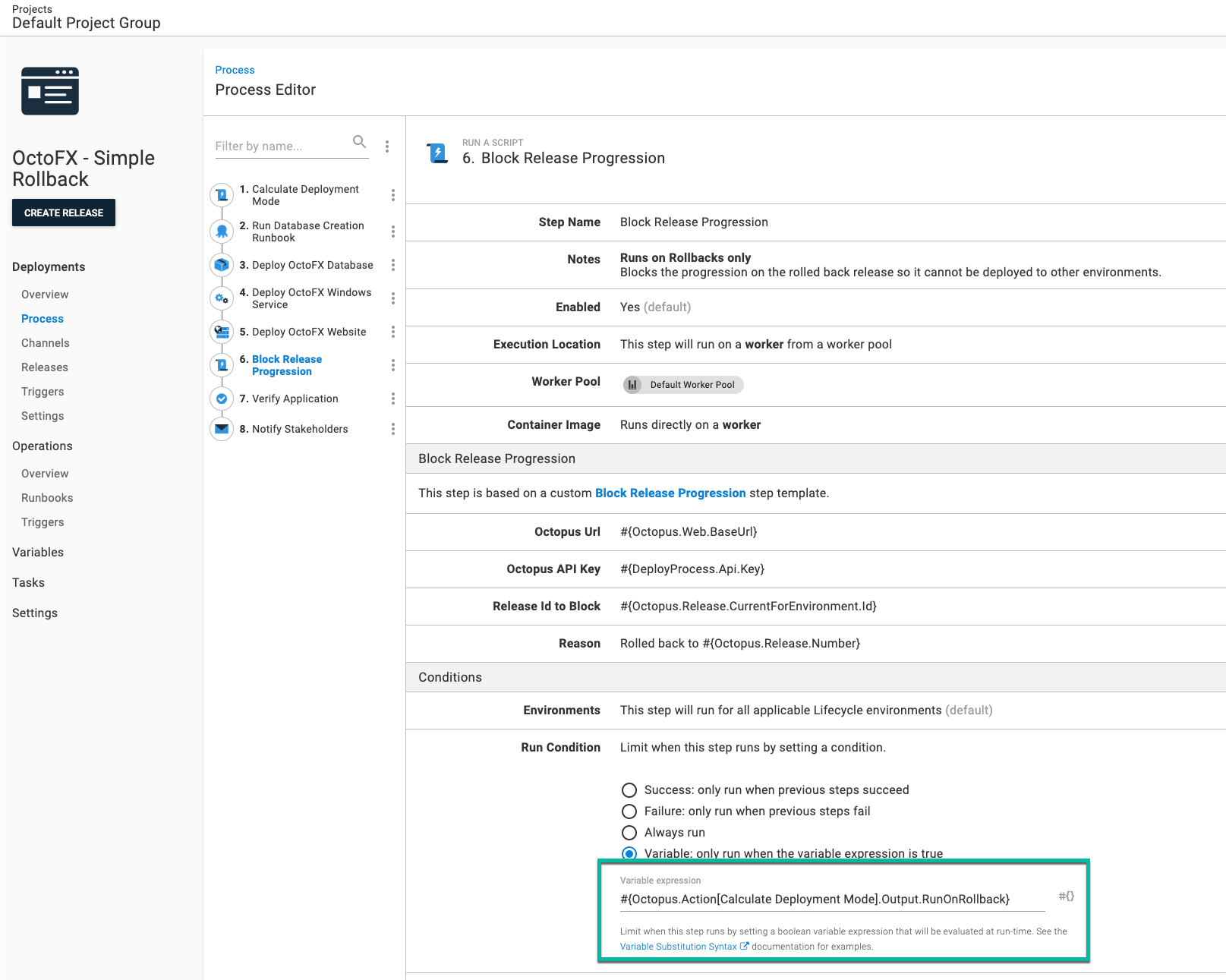 For my test, I have two releases:

Deploying 2021.9.9.6 to Development went as expected. Step 6 is skipped as that is set only to run when the deployment mode is Rollback. 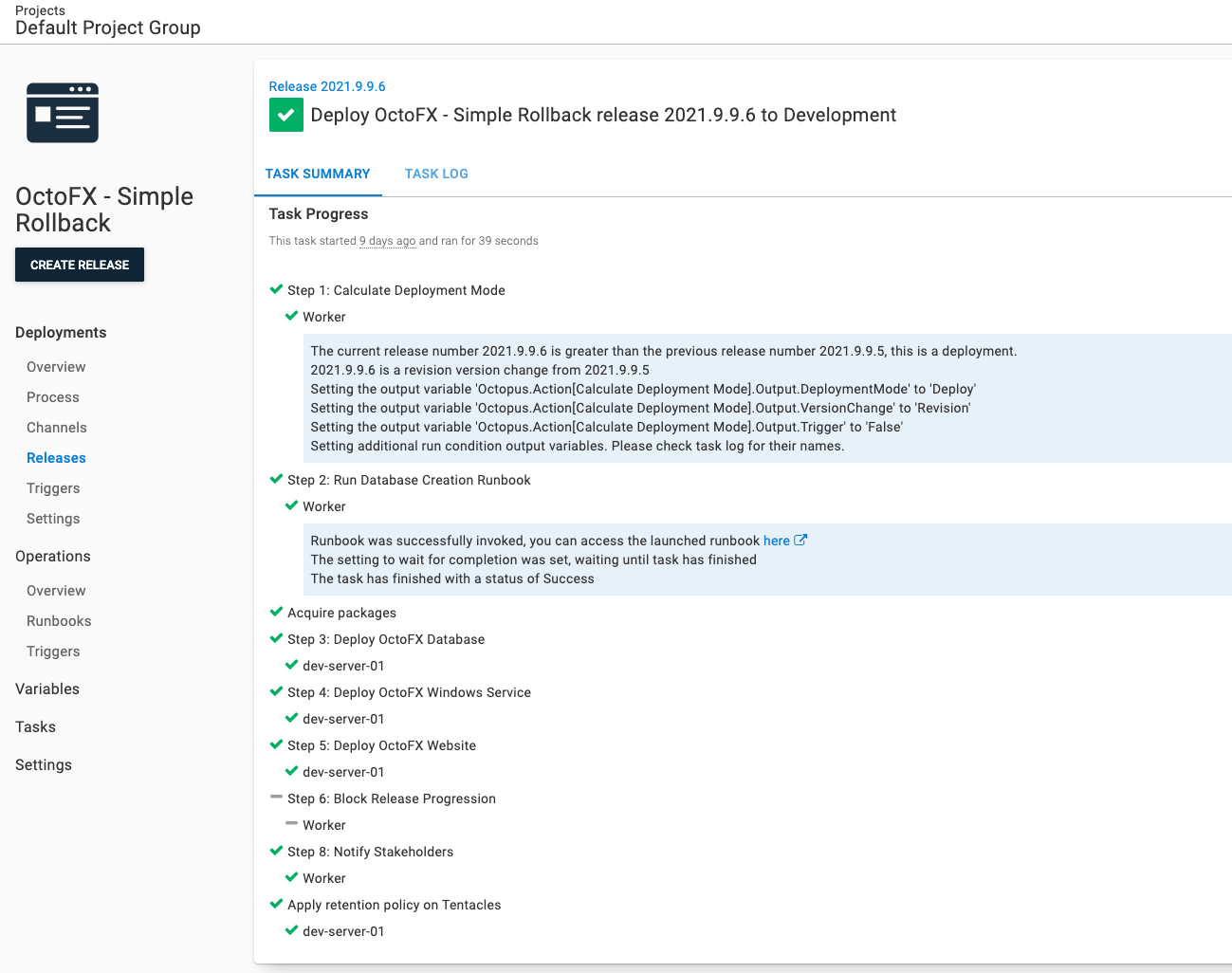 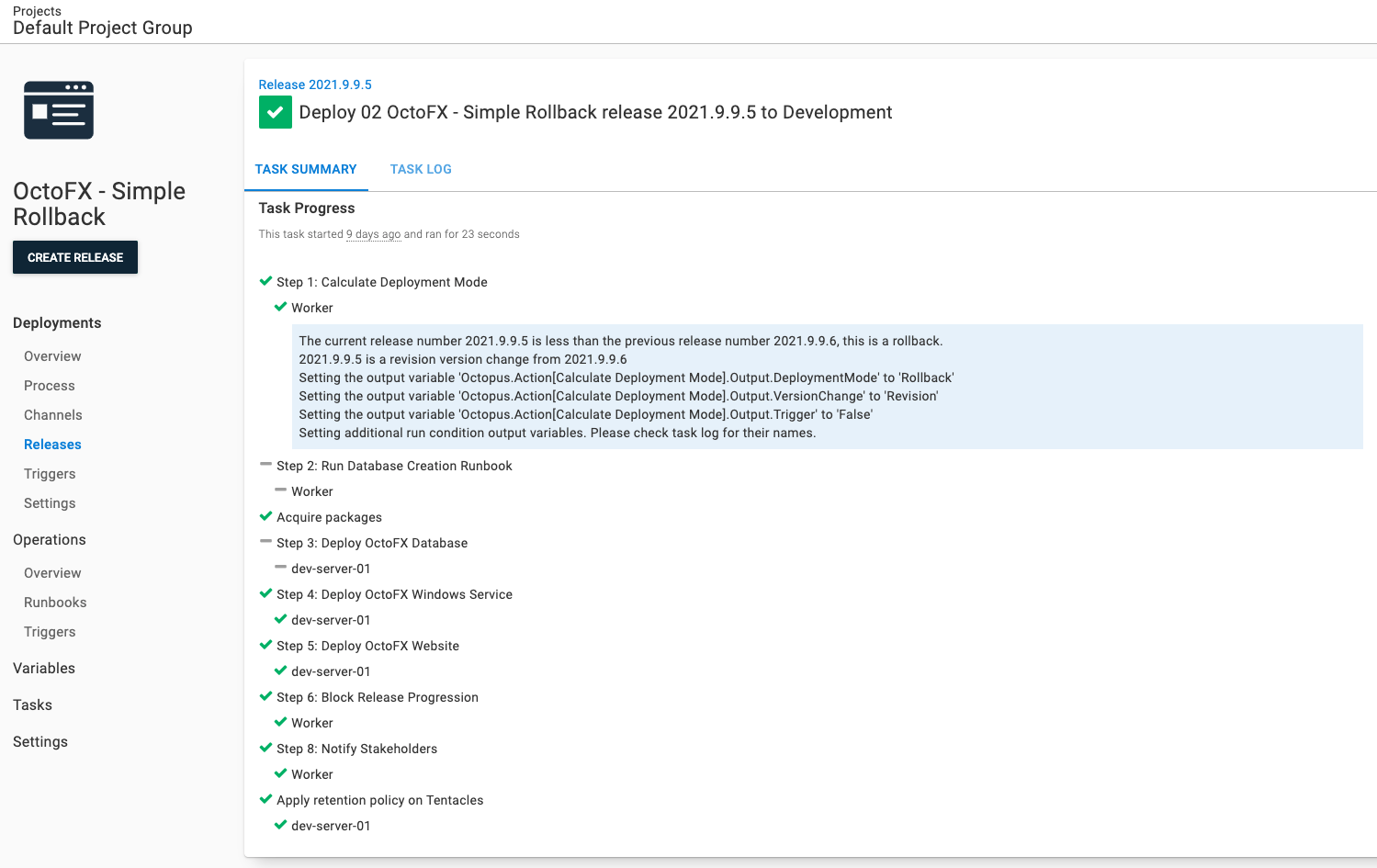 In addition, 2021.9.9.6 has had the release progression blocked. Users will see a visual indicator on the project dashboard. 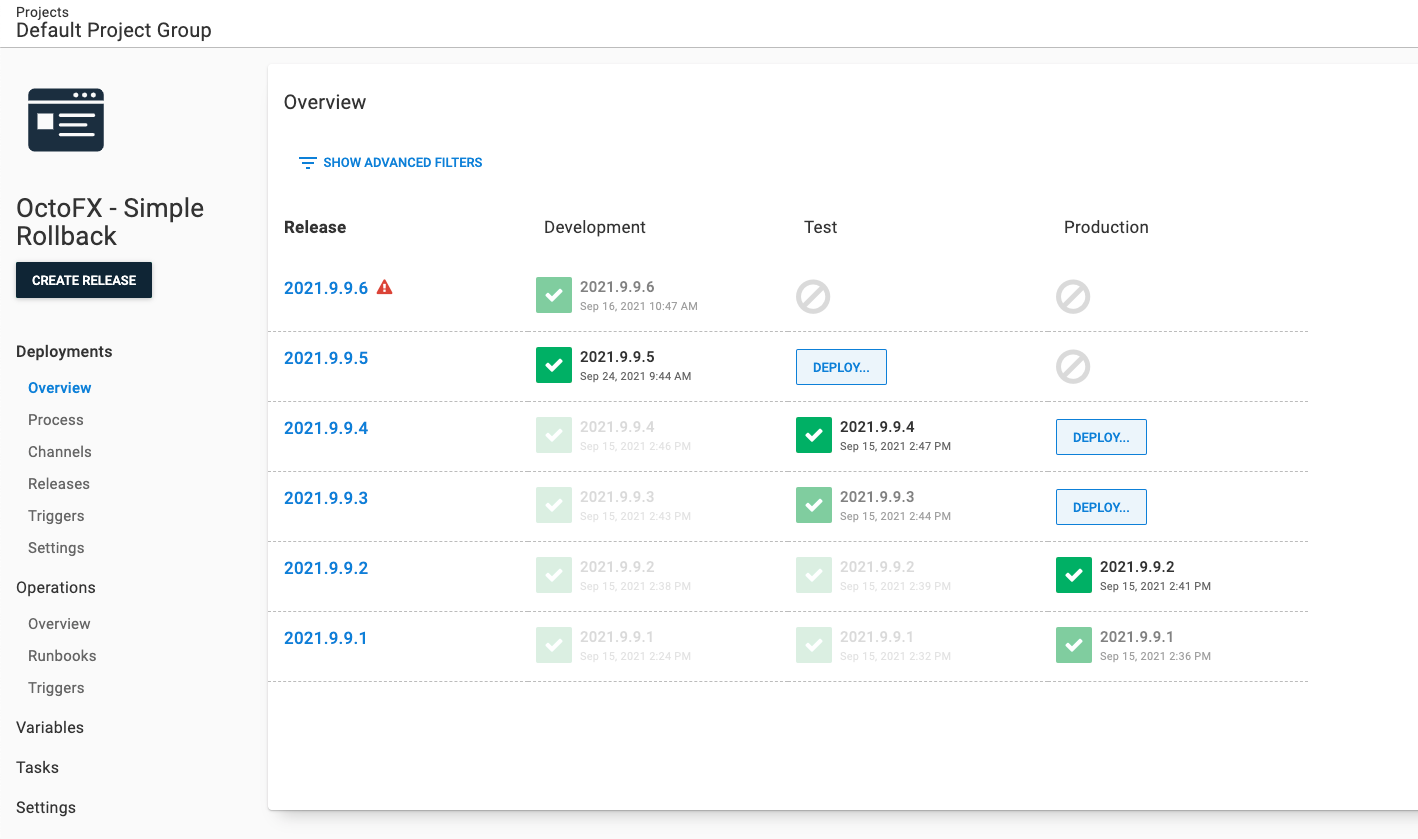 Next you need to think about triggering the rollback. I recommend manually triggering the rollback and logging an explanation. When you see a pattern, you should add in automated tests to detect if a specific condition is met. The concern I have is receiving a "false positive", causing a release to roll back in production when it shouldn't.

In this scenario, I don't trigger the rollback automatically until I have automated all the steps to make a rollback decision.

For example, if one of your conditions has no database changes, you should have a script check the SQL scripts for schema changes (for example: add table, add column). If a schema change is found, then a rollback isn't possible.

Next, automatically trigger the rollbacks for all your non-production environments. After several successful rollback decisions have been made, turn it on for production.

I was bullish adopting advanced deployment patterns such as blue/green, red/black, or canary as the only way to roll back. I used to believe you should only roll forward if you couldn't adopt those patterns, to save time and money on existing applications. There are legitimate business reasons to adopt advanced deployment patterns, for example, Google can never have an outage, so a canary-style deployment makes sense.

But an internal business application used by a few dozen people from 6am EST to 10pm PST won't get the same benefits for the cost.

You can create a rollback process with a few tweaks to your existing deployment process using variable run conditions and the new step templates, Calculate Deployment Mode and Block Release Progression. While they won't support every possible rollback scenario, they give you other options if you find a bug.