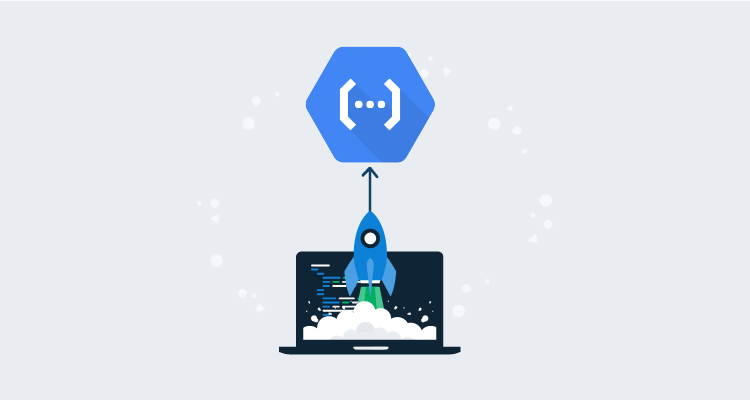 In this post, I demonstrate how a simple Java application is deployed to GCF, and explore options for advanced deployment patterns.

Our sample application implements an API for the Random Quotes web app. The source code can be found on GitHub. The API's only job is to return a JSON blob with a famous quote attributed to its author. An example of this JSON is shown below:

This API will be consumed by a simple web application. For convenience the frontend has been published as a Docker image, which you can run with the following command, where Your GCP Project ID will be replaced by the ID of the GCP project that the function has been deployed to:

The web app can then be opened at http://localhost:8080/index.html.

As noted in the introduction, GCF mostly expects that you deploy the function source code rather than a compiled application. This is convenient as it allows you to deploy the contents of a Git repository directly.

GitHub makes this particularly easy by capturing the code in a zip file with each release. This provides you with a robust workflow where:

Download and extract the latest release. You can then deploy it with the command:

The --entry-point argument defines the class that will be run in response to the trigger. The runtime is defined with the --runtime argument. You need to enable this function to be executed via HTTP with the --trigger-http argument.

Finally you allow anonymous users to execute this function with the --allow-unauthenticated argument.

After the function is deployed, it's displayed in the GCP console:

Other platforms offered by GCP, such as Google App Engine and Google Cloud Run, provide the ability to deploy revisions or versions, each with unique endpoints.

Google Cloud Run allows named revisions to be deployed via tags, with traffic able to be split between tags, and direct access to a tagged revision with a URL like https://[tagname]---randomquotes-5od2layuca-ts.a.run.app/.

GCF does not offer similar functionality. The console provides a drop down list showing function revisions, but from my experience this list only shows failed deployments. In the screenshot below you can see a function with multiple deployments, and the version list only shows the latest:

This means it's not possible to directly interact with previous revisions of functions, nor run two versions side by side. Any deployment strategies like blue/green, canary, or feature branching, rely on deploying functions with unique names and directing traffic to them via a secondary load balancing service.

Google Cloud Functions is a convenient solution for anyone looking to quickly deploy simple applications, either to support public facing interactions via HTTP, or to respond to events in the GCP ecosystem.

Unlike other application hosting platforms provided by GCP, Cloud Functions offers very simple versioning and networking options. This means advanced deployment strategies must be orchestrated externally through naming conventions. However, for more traditional deployments, this lack of flexibility can be a blessing, as function deployments require very little effort, especially when you consider that Google takes care of compiling your code for you.