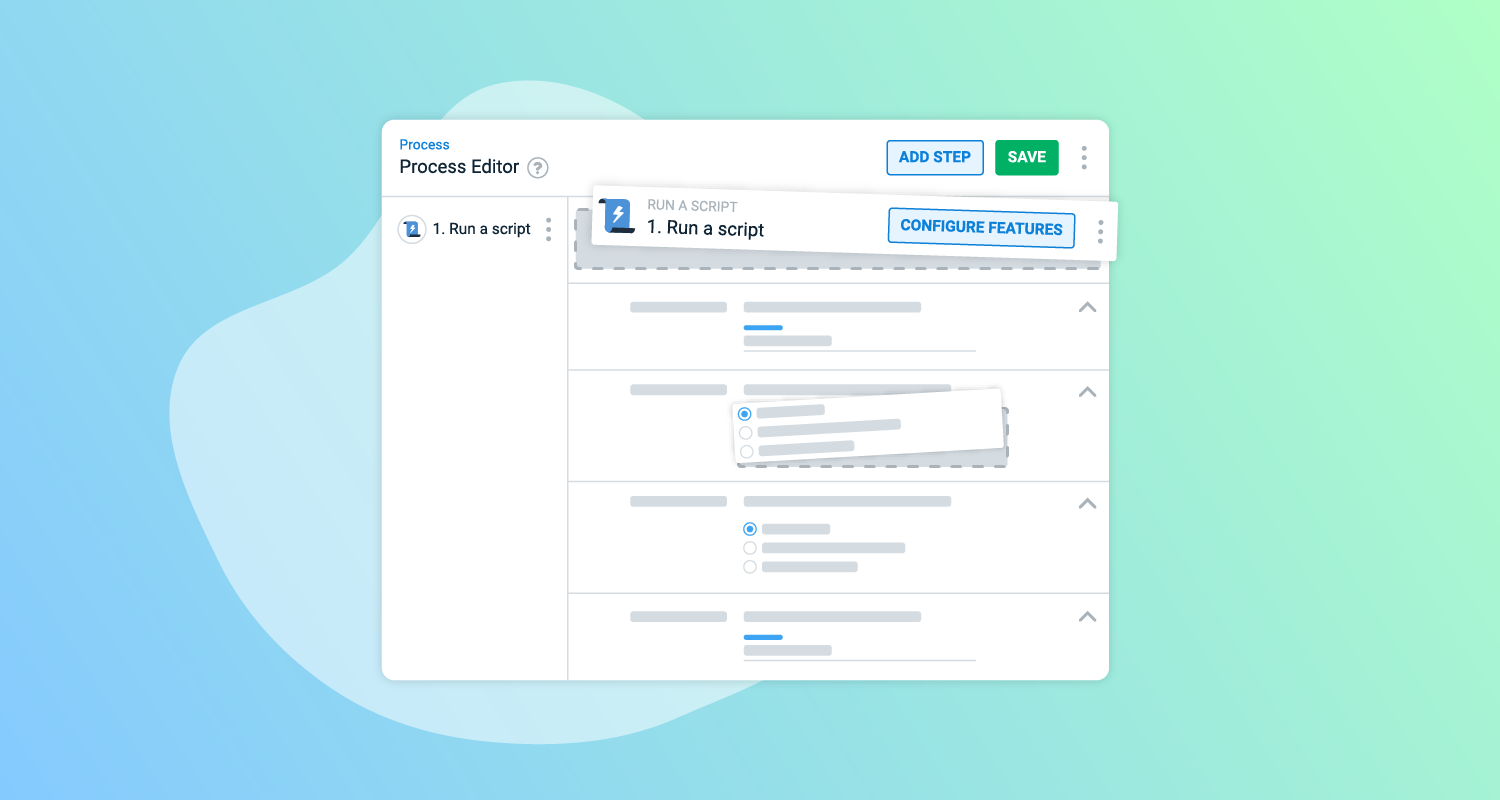 We've been working on a new way to develop the deployment steps you use in Octopus Deploy, and we call this the step package framework.

To help make deploying your software anywhere as easy as possible, Octopus Deploy is an opinionated product. Octopus Server works best when it understands the common targets you're deploying to, ranging from an IIS instance on a server to an Amazon ECS cluster in the cloud.

To help guide you through the process of interacting with these services, we create opinionated steps. For example, Octopus Deploy steps let you:

The step package framework is an evolution of how we develop these new steps for you to use in Octopus Deploy.

To understand why a new framework was required, we must first look at the problems we were trying to solve.

How we previously created steps for Octopus Deploy

As Octopus Deploy has evolved, step development has gone through several architectural implementations. Originally, steps were developed in the core of Octopus Deploy. This allowed for tight integration between the components that made up a step and the actual process of using those components to perform the defined deployment. 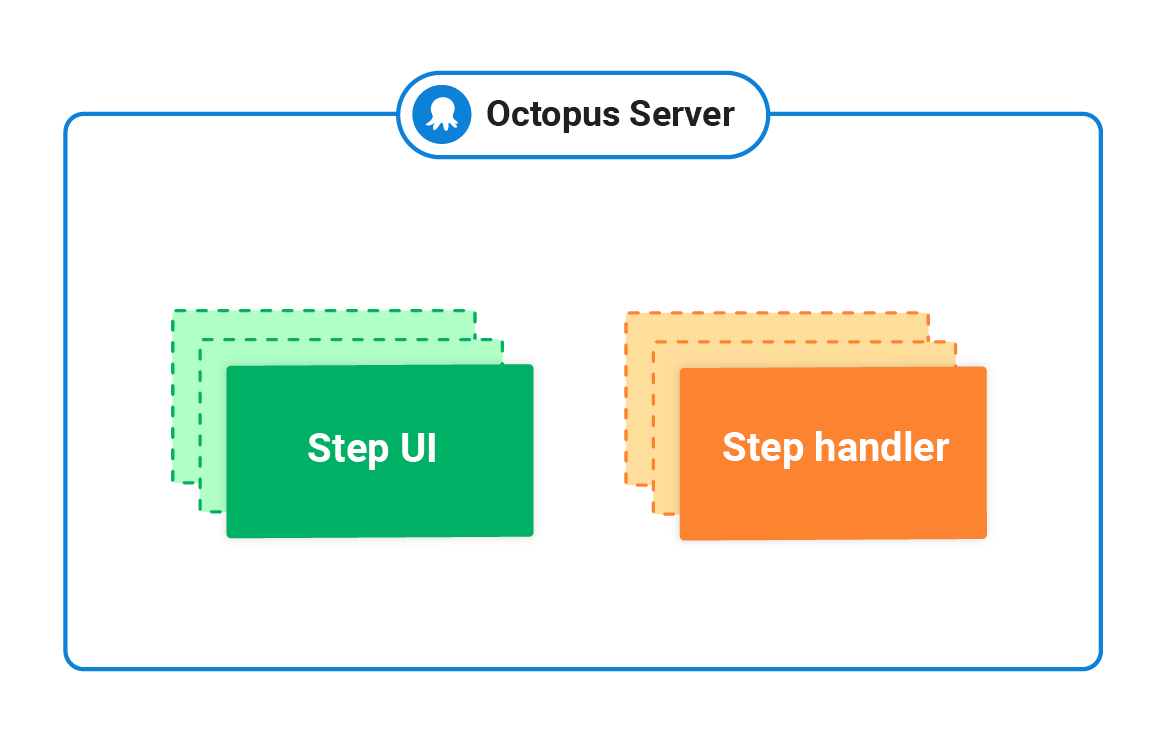 One advantage of this approach was that the developer creating these steps had all the libraries and dependencies to develop a step available to them at development time. This approach also enabled tight integration with our React front-end.

However, developing in the core of Octopus had several drawbacks, especially as we developed more steps:

In a rapidly changing environment where new cloud services pop up frequently, we realized we needed more flexibility in our approach to keep providing a world-class experience. With the number of steps in Octopus growing, the step package framework was built to solve these issues.

The step package framework is a collection of TypeScript libraries that support the creation and integration of steps into Octopus Server. It provides a CLI to enable step authors to build and package their new steps.

Unlike in the previous implementation, all of these elements now exist in the step package itself, instead of inside Octopus Server.

The step package framework does this by contributing 2 components to Octopus Server: 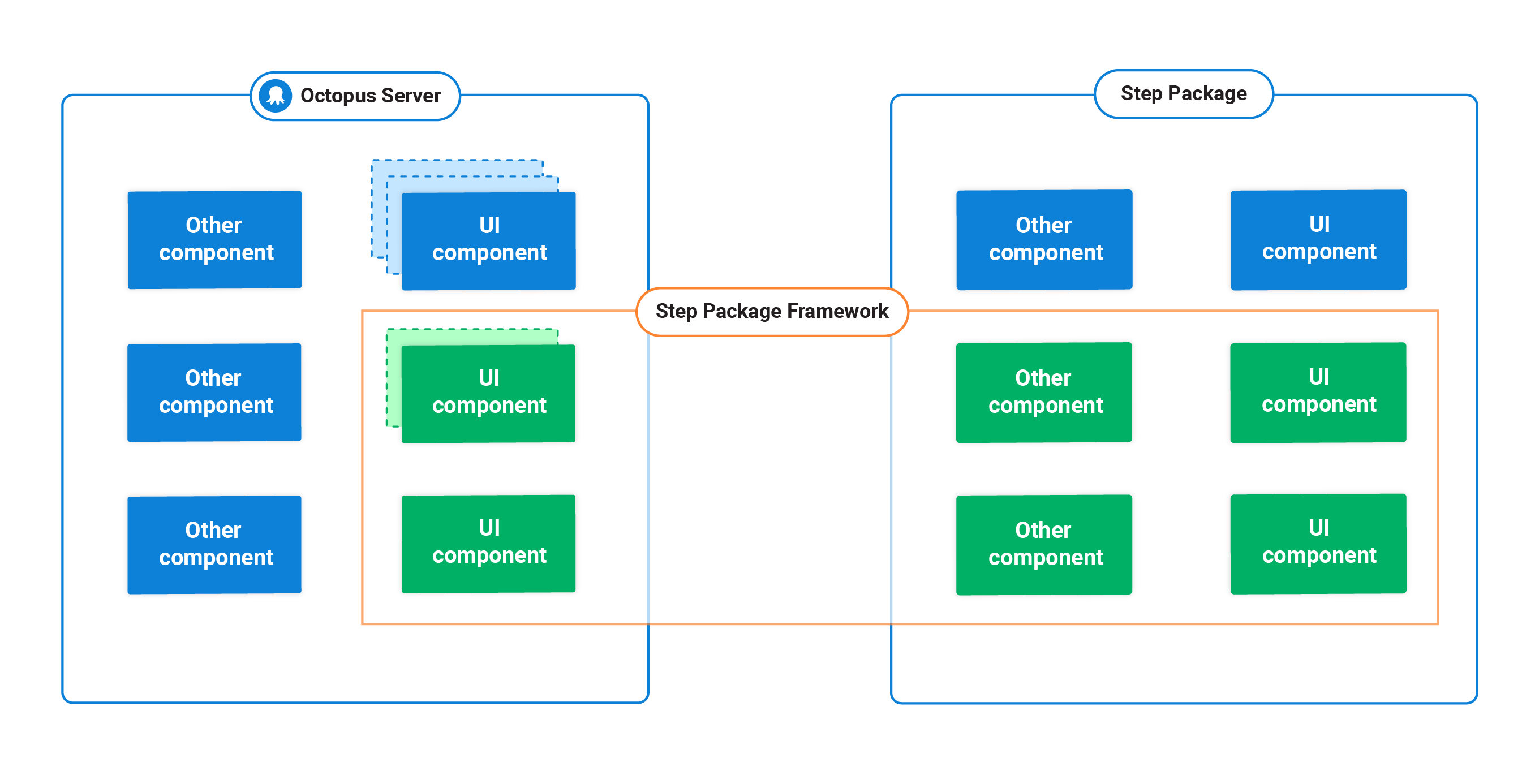 In addition to the new framework, we also needed to create a new mechanism for delivering step packages outside of Octopus Server releases. To do this, we built a globally accessible step package feed to ship the packaged steps. Unlike how NPM or NuGet feeds operate where any authenticated user can publish a package, the step package feed only contains packages developed and published by Octopus Deploy. After a step is written, built, and packaged, it's ready to be shipped to Octopus instances everywhere. We do this by publishing it to the step package feed.

While designing the step package framework, we set ourselves several constraints to help shape the final design:

When it came to our design decisions, we had to make trade-offs on these guiding principles, as they weren’t all compatible. We made the following design decisions using these tradeoffs and constraints as a guide.

Steps must be written in a language familiar to most programmers

From the start, we wanted to expose the new way of writing steps to the broadest audience possible, so we had to choose a programming language. A few considerations were:

We found JavaScript to be popular and expressive enough to match the first 2 conditions. With the addition of TypeScript, we could also build an expressive type system that protects step authors from writing invalid code and provides guidance on how to use the step package framework.

Also, JavaScript projects can be rolled up into a single distributable file, simplifying both publishing and local deployments, especially when things are frequently moving across networks (as is the case with what Octopus does).

Naturally, native JavaScript execution today is synonymous with Node.js. This suits Octopus as it's cross-platform, widely supported, and light enough to quickly launch in any environment. It's also portable, so we can ship the environment and the executable right to the destination (for example, to a deployment target or a Worker) without compatibility concerns.

Early on, we explored different options for representing the user interface of a step. One option was leveraging React and letting users write their own components, using React’s mechanism for changing the renderer.

However, we decided against it for multiple reasons:

With that in mind, we decided to decouple the mechanics of how the UI in Octopus Server works and how steps define their portion of it. Instead of asking step authors to write their own components on top of our primitives, we let the developers link their inputs with the semantic components they'd like to represent those inputs. For example, here's the code to show a text field:

As the code is declarative and not tied to any particular implementation of a text box, we could easily swap it out for something else without step authors having to do any work.

Another benefit is that we can use the type system to guide developers toward the right component. For example, we can check that only number inputs are used for the number component at build time.

The declarative style also allows a well-defined contract between Octopus Server and step packages, helping us reduce the compatibility surface and be more deliberate about breaking changes between the framework versions.

Our biggest goal for the new framework was the ability to ship new steps quickly without having to release a new version of Octopus Server. A consequence of achieving that goal is that steps must also have their own mechanism of versioning, upgrades, and migration. It also means Octopus Server must know precisely:

We solved this by producing granular compatibility manifests on both sides of the equation. Each version of Octopus Server has a set of ranges of internal components that it can guarantee are compatible, and we inject the specific versions of these components into the step package at build time. Then we can easily tell not only if a step package is compatible, but which specific portions of the package are already compatible and which require migration to the latest version.

We also built implicit guarantees into Octopus Server around version numbers, so that step authors can be sure that if they, for example, start building a step for version 2022.1, their step is always going to run on that version no matter how many minor versions and hotfixes we release later on.

At Octopus, we believe the best way to validate product ideas is to use the product yourself in a real environment, known as “dogfooding”.

After we complete our first iteration of the step package framework, it was time to refine and validate our assumptions and design decisions. To do this we built 2 fully featured steps using the new framework:

With both of these new steps, we started from a blank page, just as any other step author would when using the framework in future. This allowed us to test that the decisions that went into the framework’s design were going to hold up. Mostly, they did, but we learned a few lessons that led to further improvements.

The need for new UI components

A step UI component is a part of the step package framework that lets the step authors define the user interface of the step. When the ECS project started, the framework supported most of the basic UI components that can be used to construct an interface with the same look and feel as other built-in Octopus steps. However, the team realized some advanced components were needed, such as the container image selector component.

One feature that required a new UI component was the ability to allow exporting step information to a CloudFormation Template. Implementing these new UI components in our declarative UI presented some challenges. As this is a shared set of components for all step packages, we had to consider how to make the new component generic enough so it could be used by other step packages but still support all the functions required for the ECS steps. This challenge is a conscious trade-off built into the framework that significantly reduces the complexity of authoring a new step at the cost of exposing only a subset of Octopus functionality to the steps.

One critical aspect the team considered during the development of the ECS steps was how to write integration tests. The tests are required to construct all resources needed in the cloud service so that the deployment of the steps being tested can be executed.

We needed to set up a large number of resources in AWS before the tests could actually run. We decided to have a Terraform template spin up the resources for the integration test to eliminate the need for static resources.

Realizing these needs would also be applicable to other types of steps in future, such as those using Azure or GCP infrastructure, we developed a testing framework that acquires and sets up infrastructure from a Terraform template supplied by the client. The client declares the required cloud provider (Azure, AWS, or GCP) and provides the credentials. The framework then outputs a random resource code that can both be used in the step authors’ own Terraform templates and in the tests to access and validate resources.

This testing framework facilitated the development of multiple integration tests we implemented in the ECS steps and is an essential tool for step authors working on any steps that require infrastructure setup in major cloud providers.

The pain of testing the steps locally

Steps built with the step package framework are independently developed from Octopus Server. So, we were required to manually integrate the under-development step packages to Octopus Server when we wanted to see how the steps worked visually. To do that, we needed to:

This process was time consuming during the development of the ECS steps. As a result, we implemented a local feed that allows Octopus Server to periodically fetch step packages locally and load them to a running Octopus Server instance. This enables step authors to conveniently apply their step package changes without restarting their Octopus Server.

How the step package framework benefits you

The step package framework is built to help Octopus develop steps in a new way, but what does this mean for you as a user of Octopus Deploy?

Please note that while step packages are packaged and delivered separately from Octopus Server, they still need to be installed in Server to use them.

After a step package has been downloaded and processed into an Octopus Server instance, it updates the usages of that step package in your deployment processes depending on the difference between the current and new versions.

Step packages use the semantic versioning format: major.minor.patch. If a new minor or patch version of a step package is released, then your processes will automatically be updated.

Details on which version of a step package is being used are available in the About this step section of the step in your deployment editor.

If a new major version is available, you'll see the following banner in your step editor.

Upgrading to use the new major version is as easy as clicking the Upgrade button and updating your deployment process with the newly required parameters, then clicking Save.

The step package framework is changing how we build and deliver new steps to your Octopus Server instances. It means that new steps can be delivered faster and without the need for upgrades.

We look forward to bringing you new and improved steps using this framework as we roll out even more functionality.

Thanks to Ray Nham, Egor Pavlikhin, and Matt Shepherd who all contributed to this blog post.