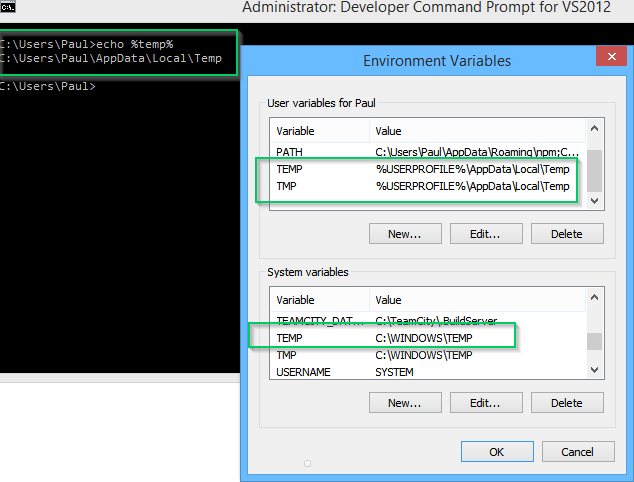 When the service runs as my user account, I get what I'd expect:

However, run the service as the built-in SYSTEM (Local System) account, and you get different behavior:

It appears that for Windows Services that run under the SYSTEM account, even though there's a user-specific environment variable, a different %TEMP% is used.

This caused a bug in yesterday's 2.6 pre-release because we added a feature to automatically update environment variables prior to each script run (in case you've changed environment variables, and don't want to restart the Tentacle windows service). Of course, no good deed goes unpunished :-)

I can't find any documentation on this feature, but environment variables are inherited by processes from their parent. Services are owned by services.exe, which is owned by wininit.exe. Using Process Explorer, wininit.exe's environment variables set TEMP to C:\Windows\TEMP. My guess is this is probably a backwards compatibility feature for old Windows Services that relied on using C:\Windows\TEMP.

(We'll release a patch to 2.6 tomorrow with a fix for this)

Invoking an executable from PowerShell with a dynamic number of parameters