For years, I've been a fan of using continuous integration tools. Early on it was CruiseControl.NET and Draco with NAnt scripts, and later it was TeamCity. Even for personal projects I like to use a CI server, for many reasons, including:

Each new continuous integration server in the .NET space made it easier to achieve automated builds. But before working on Octopus Deploy, I never found a good solution to automated deployment (I think we still have a long way to go, but I like to hope we're going in the right direction).

In Visual Studio, what must amount to hundreds of man-hours have been invested into context menus and dialogs that make it easy to take code laying around on a developers machine, and to put it on a production server. Take this dialog: 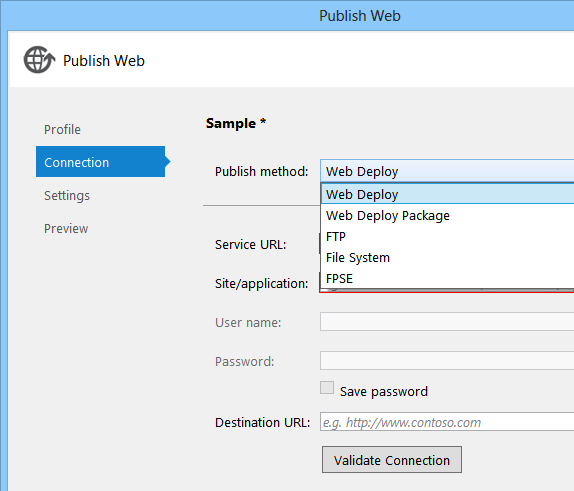 That's why with Octopus, we've focused on making it easy to package applications for deployment as part of an automated build and deployment story, ideally on a build server, rather than from your development machine. Instead of wizards and dialogs and context menus, we've invested in TeamCity plugins and MSBuild extensions. We believe in encouraging our customers to follow good practices like automated builds on a build server, and making it easy for them to do so.

Of course, no good deed goes unpunished, and there's a price to pay. You can't just go from having code in Visual Studio to a production deployment with Octopus without at least having a NuGet server, and some kind of automated build process. I think it's better, but unlike wizards and context menus, there's a problem: it doesn't demo very well. It can require a significant up-front investment just to try the product.

So I think to myself: does Octopus need a wizard that can package up code you've built on your workstation, and deploy it? Should we invest our limited time in Visual Studio plugins and publishing wizards? Or, should we invest it in better build server integration? Is it too much to expect people to use the command line and build scripts to create packages?

When you first tried Octopus, one of the first steps you must have done is to create a NuGet package. How did you do it? Was it hard? Did it almost make you give up on the product before you even got to the first deployment?

What can we do to make it easier to get started with automated deployments?

Have you designed your application for deployment?

How does Octopus handle rollbacks?