It can be difficult to get a sense of how a product like Octopus Deploy works, without being able to interact with it. We have a ten short videos that show how to set things up, but that's not quite the same as being able to click around and explore a real server.

The demo server runs the latest version of Octopus, and has two projects which are deployed to seven Tentacles. You can sign in as a guest to view the server and browse around. We've made the Guest account a read-only Octopus Administrator; you can view anything, but you can't actually change the system. 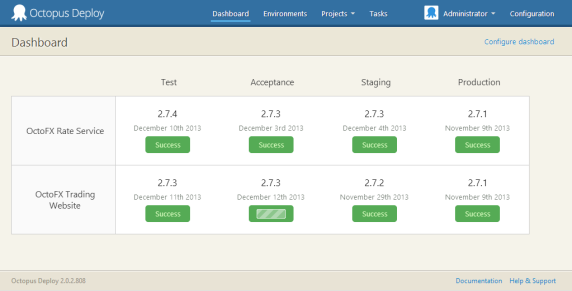 There's also a demo TeamCity server which is configured to compile code and deploy to Octopus. Every hour it triggers a build and deploy, and every week it promotes a release to the Acceptance environment.