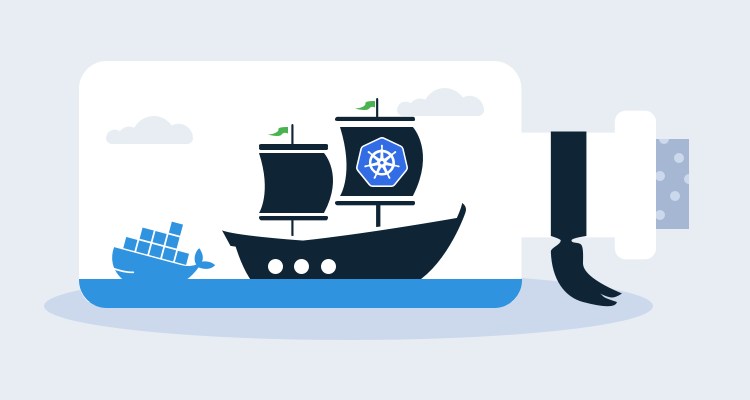 Microservices can be a powerful design pattern that allow large teams of developers to deliver code to production without requiring code to be coordinated in a single codebase and released on a common schedule. Deploying these microservices can be a challenge though, as the cost of orchestrating Kubernetes resources and promoting between environments is paid by each individual microservice.

Octopus has a number of useful features to help streamline and manage microservice deployments. In this post and screencast, we’ll run through the process of deploying the sample microservice application Online Boutique, which was created by Google.

If you look at the YAML that contains all the Kubernetes resource definitions, you will notice a pattern where each deployment is exposed by a matching service. Pairing deployments and services like this is a common practice in Kubernetes deployments, and this pattern is captured by the Deploy Kubernetes containers step in Octopus.

You will also notice that the deployment definitions are largely similar for the majority of the microservices. They all define:

The similarities between deployment resources is easy to see using a diff tool: 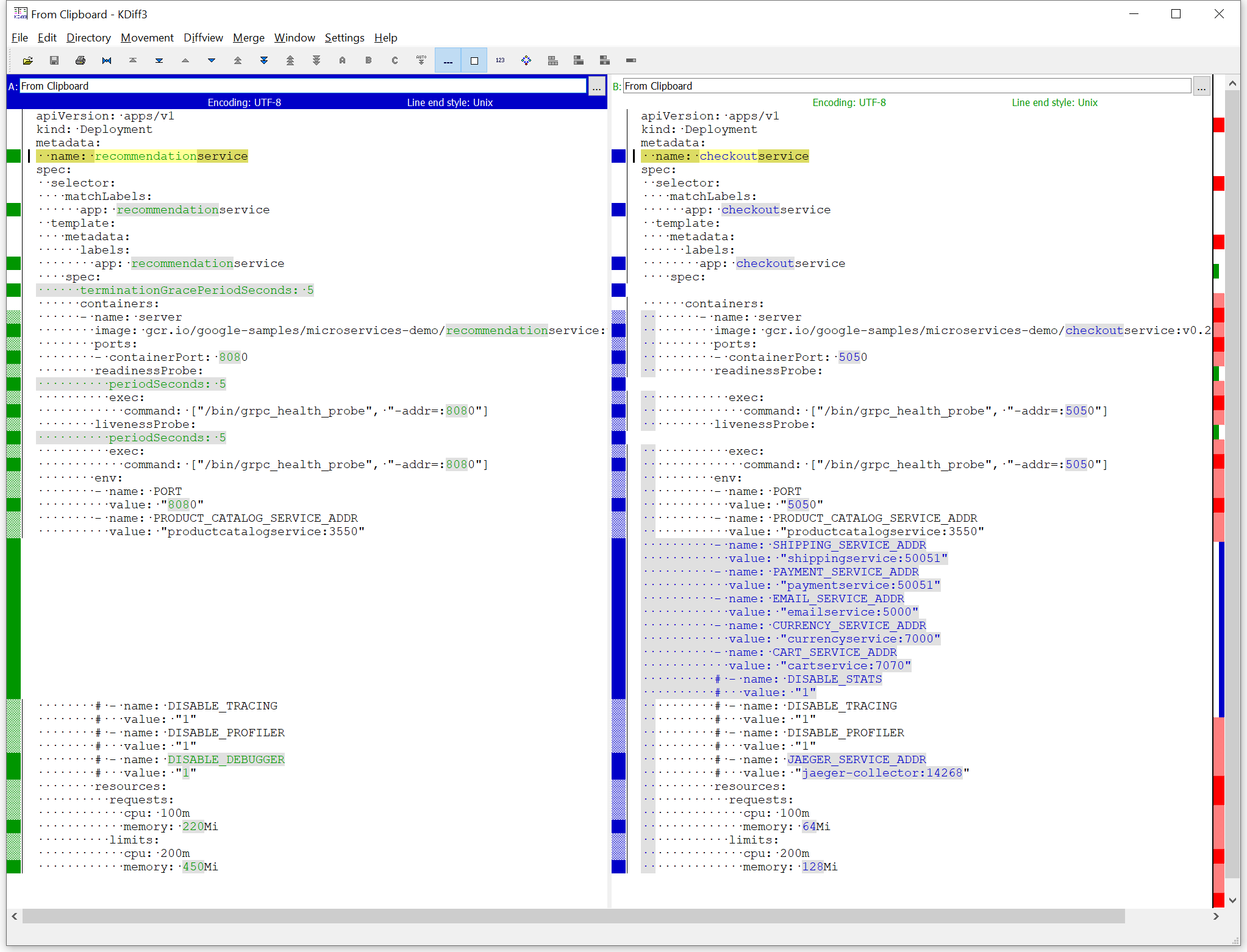 To remove the boilerplate code required to define a deployment and its associated service, we take advantage of a feature in Octopus called step templates. The YAML below, which can be added to a Deploy Kubernetes containers step via the Edit YAML option in the deployment section, captures the fields used by most of the microservice applications in their deployments, with application specific values replaced with variables:

There are a few interesting aspects of this YAML to call out.

The if syntax (for example #{if ServiceTerminationGracePeriodSeconds}#{ServiceTerminationGracePeriodSeconds}#{/if}) provides a way to return the variable value if it has been defined, or an empty string if the variable has not been defined. Octopus will ignore empty YAML properties where appropriate, to avoid validation errors when deploying the final resource.

The secret we reference here is called mysecret-#{Octopus.Deployment.Id | ToLower} and will be created as a custom resource later in the step.

This YAML can also be added to the step via the Edit YAML option in the service section:

Finally, we create the secret that holds the environment variables exposed to the pod as a custom resource. 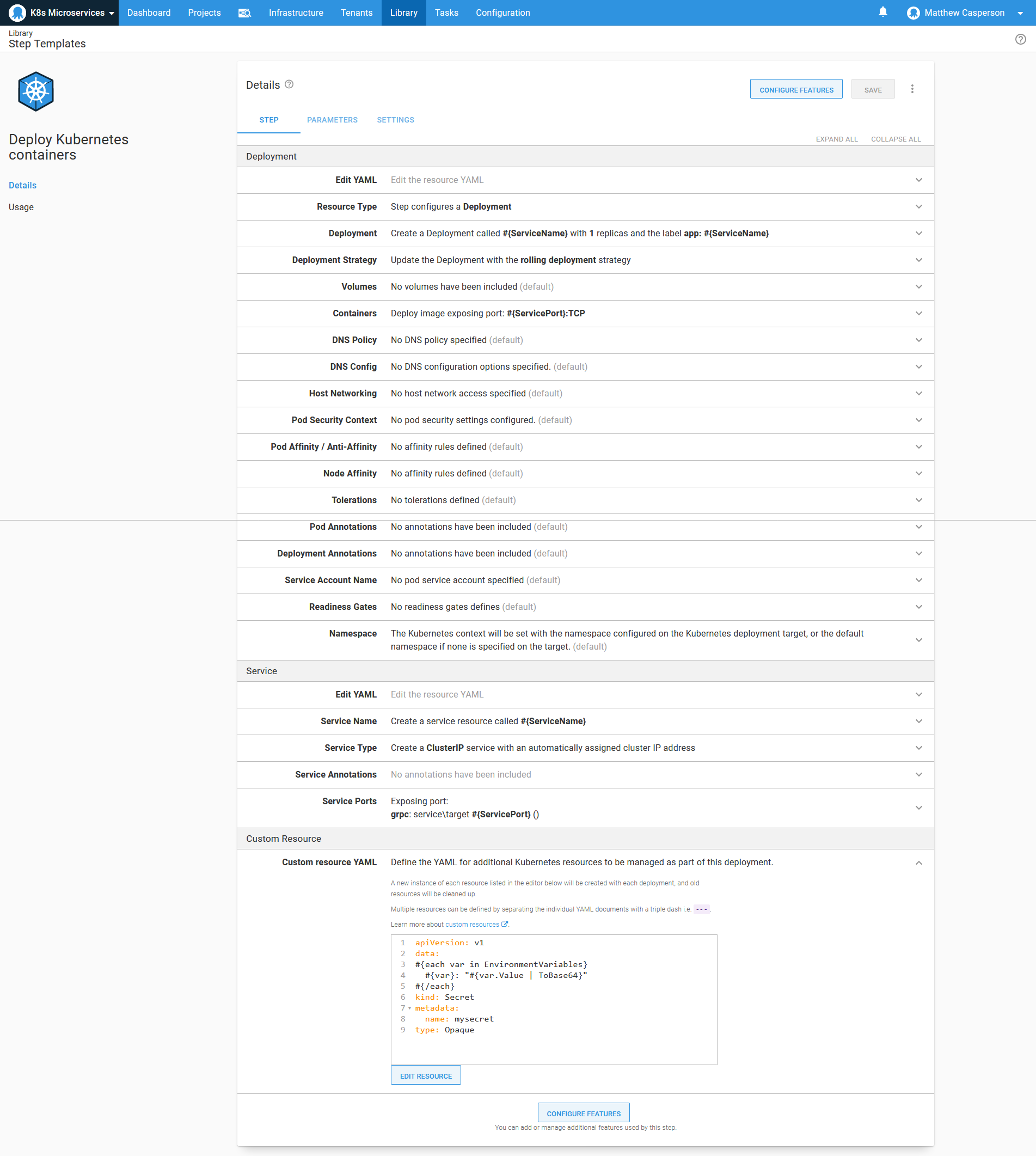 The variables that make up the deployment are then exposed as parameters: 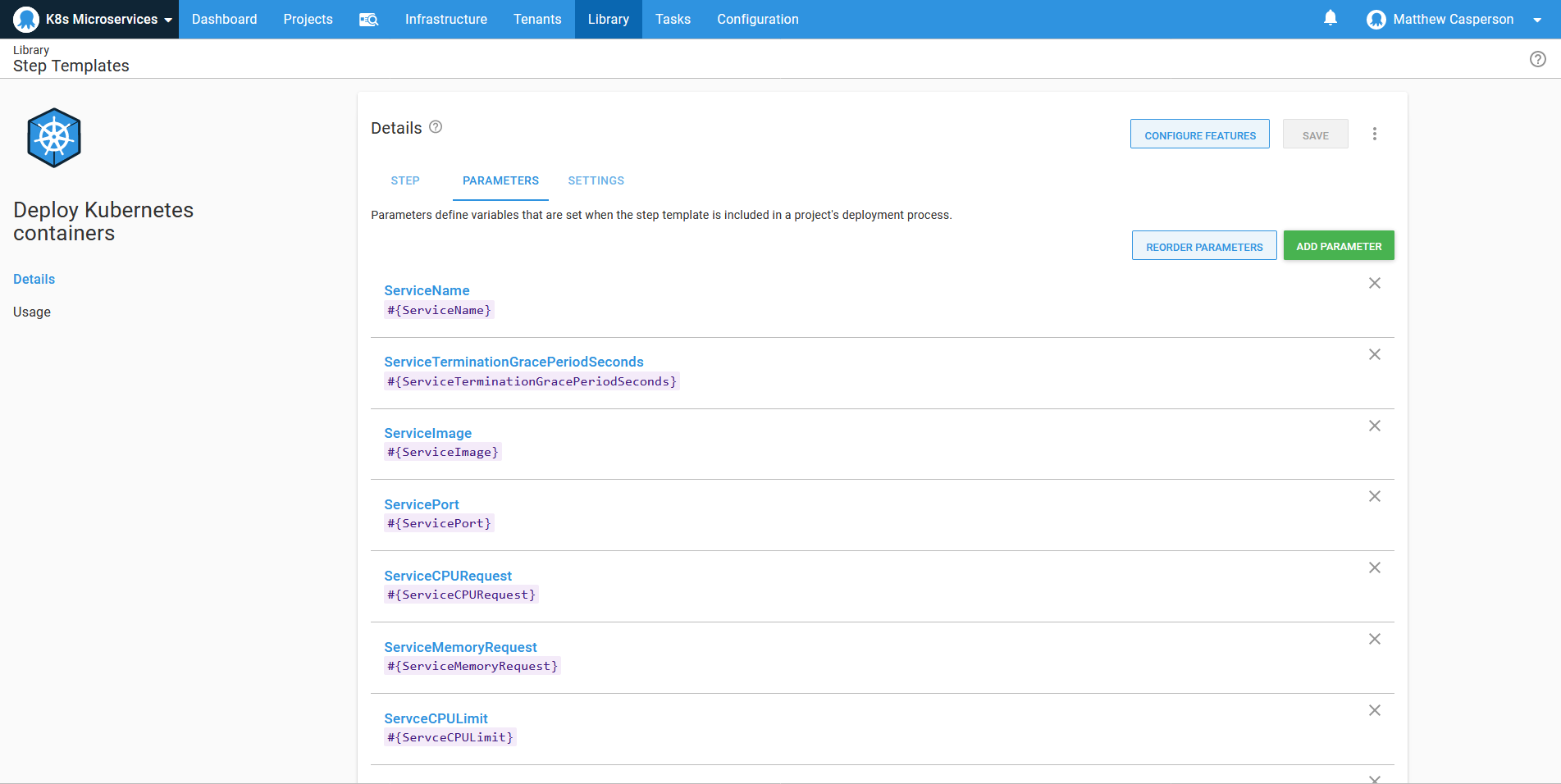 The container image name is defined as a package, allowing the image version to be selected during release creation: 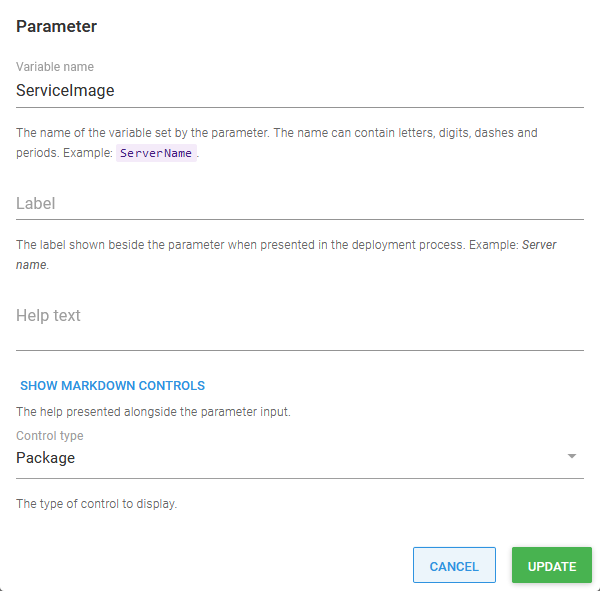 This parameter is referenced in the container definition with the Let the project select the package option for the Docker image field:

With the template deployed, we now create those microservices that originally shared a common deployment pattern. Since all the common boilerplate code has been abstracted away, all we do is populate the parameters defined by the step template: 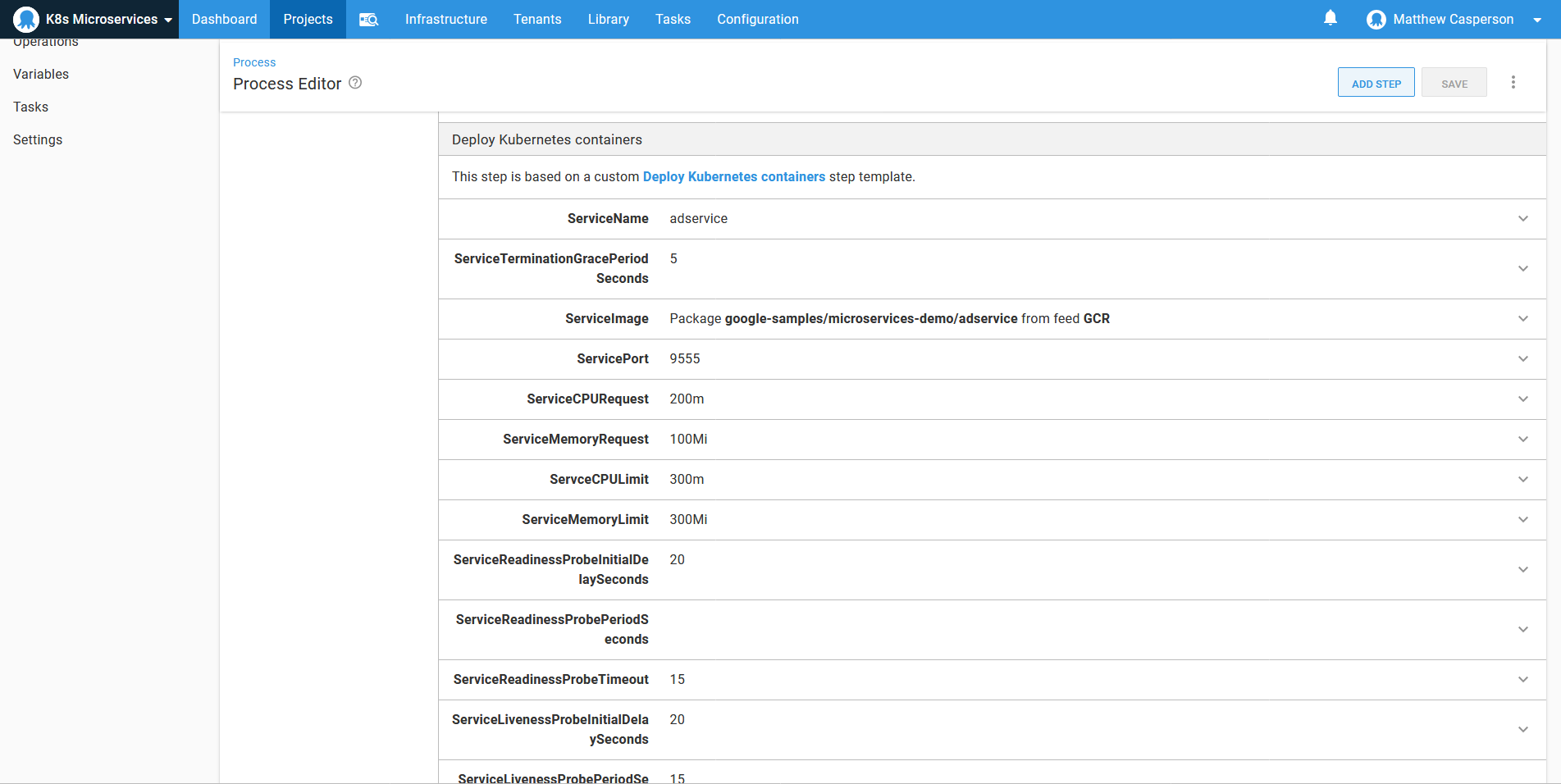 The environment variables are then defined using the group syntax noted above:

For those microservices that don’t follow the standard template (for example, the frontend app and the redis database), we can simply copy the deployment and service YAML into the appropriate Edit YAML section, which will populate the UI for us:

For whatever reason, when Google published the Docker images that make up this sample microservice application, they included an image tagged with a hash like 31df60f.

We want our deployments to ignore this hash and instead allow the selection of the more typical version tags like v0.2.0. To do this, we need to use a channel rule.

The rule defines a version range of [0.0,1.0], which includes all the zero based point releases published by Google, and ignores the image tagged with a hash:

Docker images with plain text tags, like redis:alpine, can also take advantage of channel rules. The tag alpine is considered to be the version 0.0.0-alpine, which can be matched with the version rule (,0.0) and a pre-release regular expression of ^alpine$.

The entire microservice stack is made up of nearly a dozen individual services. These could be promoted from one environment to another individually. If the microservices are genuinely separate entities managed by different teams and released on their own individual time lines, then individually promoting the services may be desirable.

There are cases where the microservices are still tightly coupled and must be released in a particular order, or situations where it’s critical that the state of an environment be well known at any time. For this, Octopus offers the Deploy a release step.

Here is an example of our meta-project used to deploy all microservices to a given environment:

In this demo, we took advantage of a number of Octopus features to deploy a microservice application stack:

This meant that once the initial templates were defined, we could define new microservice deployments quickly and reliably and populate whole environments with the deployment of a single meta-project.

Self-hosted Octopus in a Cloud VM vs. Octopus Cloud