In the past few months I've spent quite a bit of time with ASP.NET Core 1, and this week I've been taking a deep dive into Windows Server 2016 and Nano Server. One thing is clear: for developers, how we deploy and run applications is going to change quite substantially when all of this makes its way into production.

Right now, a tool like Octopus works by taking your application, packaging it into a ZIP, then pushing it to a remote machine. There, it's unzipped, configured, and a new process is launched while an old process is retired. Processes might be:

As far as the stack goes, it looks either like this: 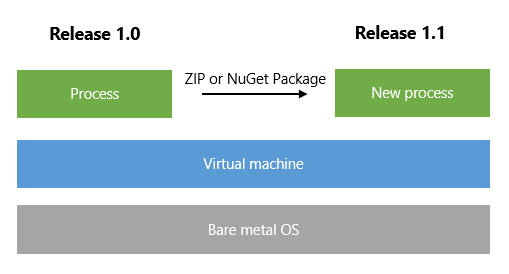 (This is why anyone who works with Azure Cloud Services will tell you how much they hate deploying them. Perhaps if Nano Server had been around, Cloud Services would have been huge)

Thinking about it in a different way: at the moment, the only viable "unit of deployment" which changes between releases of your application is the process. Building and deploying a new VM for every application change is nuts (on Windows, that is).

There are three flavors of Windows Server 2016. The first two we're already familiar with: Server with a GUI, and Server Core. Nothing interesting there.

The third flavor is Nano Server, and it's a game changer. Here's what's interesting about Nano Server:

Like a Linux distribution, Nano Server also gives you choices as to how to run it:

Yes, the other major change in Windows Server 2016 is containers. This is a technology that's been popularized by the likes of Docker on Linux operating systems, and it's coming to Windows.

Many units of application deployment

With Nano Server, as you think about releasing and deploying your application in 2016, there are suddenly many options: 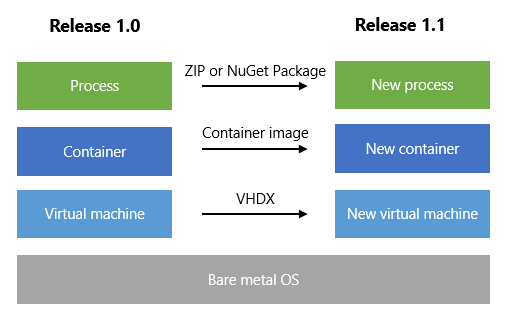 Suppose your team is doing two-week sprints, and delivering a new version of the software every two weeks to test, and then eventually production. You now have choices in how you deliver the new software:

The tiny size of Nano Server images makes them a very plausible "build artifact" in your continuous delivery pipeline. Why build an MSI or ZIP, when you can build an entire VM image, using roughly the same amount of time and artifact size?

For Octopus, this means we need to begin to operate at each level of this stack. At the moment, when you create a release, you choose the version of NuGet/ZIP packages to include in the release. In the future, this will mean:

Trade offs, and how to choose

The big benefit of these changes is isolation and security: Microsoft are all about Azure right now, so the investment in being able to run tiny, fully isolated OS images makes a ton of sense.

On the other hand, container images and VHDX's make deploy-time configuration a little more clunky. In an ideal world, we'd use the same container image/VHDX in our Test as well as Production environments. But Test and Production might use different database connection strings.

As another example, perhaps your application allows different add-on packages to be enabled per deployment. Again, it's going to be easier to "compose" these applications at runtime when deploying processes, than trying to compose them in a VHDX if that's the unit of deployment.

Regardless of how you deliver new builds of your application - as ZIPs, as Docker images, as VHDXs or bootable USB thumb drives - Nano Server is an option. And it's a pretty compelling one.

.NET Core and Nano Server are the future

Gazing into my crystal ball, I will make two bold predictions:

Think about it this way: anything really important for server apps has either been ported to .NET Core, or will over the next few years. If your app can target .NET Core, then it should. There's no reason to benefit to limiting yourself to the full .NET Framework, and the only reasons that would tie you to the full .NET Framework will diminish over time as those technologies die.

And if your app targets .NET Core, then it should be able to run on Nano Server. Why keep all the overhead of Server with a GUI or Server Core if you can run on tiny, fast, small surface area Nano Server?

That said, I'm sure the "full flavors" of Windows Server will continue to exist for a long time, mostly for the servers that are treated as "pets" rather than "cattle". Examples will be domain controllers, SQL Server hosts, etc. - but it will be a small niche. For the bulk of servers that scale horizontally (app and web servers), Nano Server is the future.