We are proud to announce the release of Alpha 2 as part of the Early Access Program (EAP) for Octopus Deploy 3.4! This feature release is ambitious, and we want to get it in your hands earlier, rather than waiting to ship a nearly-baked pre-release. Now is absolutely the best time to get involved and let us know what you think!

What will Octopus Deploy 3.4 look like when it ships?

We are targeting two major sets of features for the full release of Octopus Deploy 3.4:

We have built a small utility that drives the Octopus API to install the full multi-tenant sample (shown in the demo video above) into your Octopus 3.4.0 Alpha 2 server. Download Octopus.Sampler.1.0.0.zip and look at the EAP page for more details.

Still to come for multi-tenant deployments

We've made a lot of progress but there are still some important pieces left to build:

Based on your feedback (yes it really helps!) we have refined the concept of machine policy, and in Alpha 2 we think machine policies is feature-complete.

Other possibilities we are considering:

What about auto-deployment, and skipping machines that aren't available for a deployment? Read on, dear reader!

We think deployment-related controls should belong to a project

In Alpha 1 we attempted to fit everything into machine policies. Upon reflection (and your feedback) we've decided to move the deployment-related controls into the project. It is really the deployment process that determines whether deployment targets can safely be skipped, or included mid-deployment, not the machine policy.

A little while ago we wrote an RFC for something we were calling Octopus Reactions. The concept is you can define triggers based on certain Octopus events, and then actions to perform in response. We think triggers and actions provide a better way to model auto-deployments. We are planning to implement auto-deployments using triggers for Octopus 3.4. Follow this GitHub issue for more details.

Imagine configuring a trigger when a machine with the web-server role becomes healthy (filtered by environment), you could trigger the deployment of your project(s), running steps specific to that web-server role, and somehow selecting which other steps should/should-not run as part of this auto-deployment. 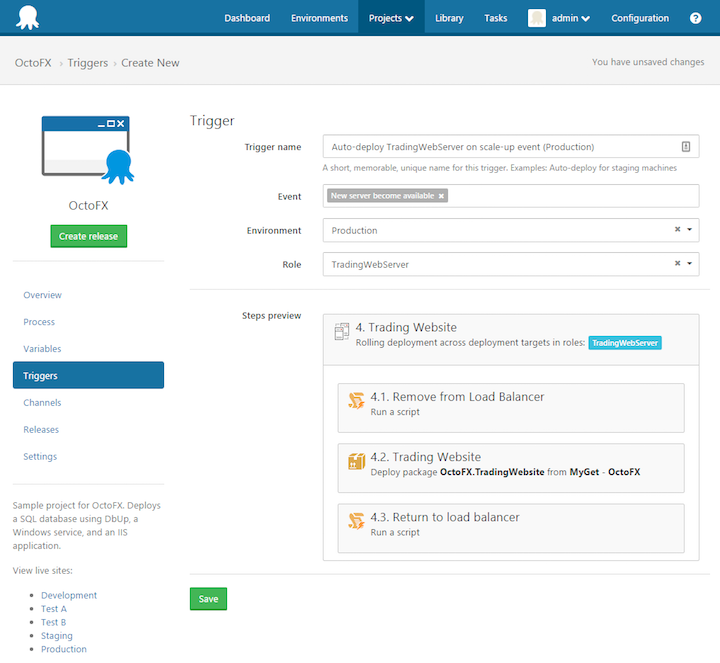 Triggers are still a work in progress so you cannot configure auto-deployments in Alpha 2, but we are keen to get your feedback based on this screenshot. What do you think?

Getting started with Octopus Deploy Alpha 2

Try it out on our EAP demo server using the guest account.

Have an Azure subscription? You can spin up an entire Octopus setup using your own Azure subscription with our newly published template in the Azure Marketplace. This will install the latest stable version of Octopus Server on the VM, but you can use remote desktop to upgrade the Octopus Server to the EAP version. Finally you can easily delete the entire Resource Group when you're done!

Want to install it yourself?

Our EAP comes with a 45-day Enterprise trial license. Download the latest EAP release taking a look through the release notes. Since it is so early in the development phase we will not support upgrading from EAP releases. We recommend installing the EAP release on a trial server.

Your feedback really does make a difference

Please post any feedback and join the conversation in our discussion forum. We would especially appreciate feedback on:

Go ahead, get involved and help us build the best Octopus Deploy yet. Happy Deployments!