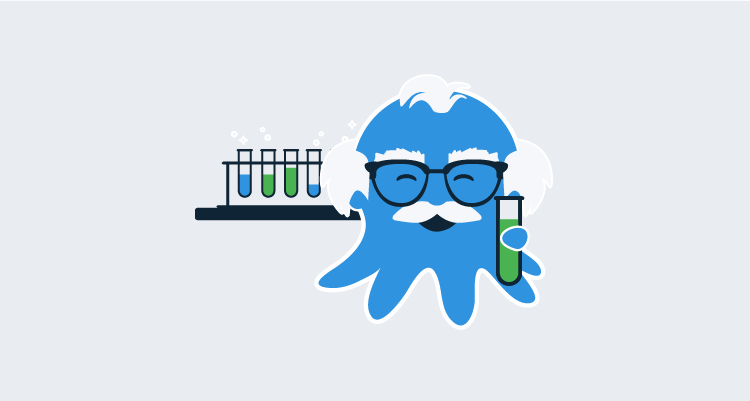 Testing code is one of the more important things a developer can do. In fact, there is a coding practice called Test-Driven Development (TDD) that is based around writing tests first and then writing code based on the test. Even if you don't follow test-driven development, it is still extremely important to think about implementing unit tests and mock tests into the code. Without testing, you are essentially deploying code and hoping it will work the way you think it should. Even if the code deploys just fine that one time if the code is changed, you'll have zero ideas about what the outcome will be.

In this post, you will focus on testing Terraform code with a Golang framework called Terratest. Terratest is one of the most popular Terraform testing frameworks and comes feature-rich with many different sets of tools.

Before jumping into the testing portion, let's review what testing actually is. The two primary tests that you will typically use are:

Unit tests are a software testing methodology for testing specific units of code. For example, let's say you have a class that's called Car and a method inside of that class called Ford. The Ford method returns a few values; what color the Ford is, what model the Ford is, and what year the Ford is. You can run that code to see if the results are correct, but what if you don't want to create anything specific and you just want to see how the code builds? This is where a unit test comes in. The unit test can do tests on what the values should be.

Let's say the following values should be the result:

Mock tests are another software testing methodology that can either fake the creation of a resource or actually create the resource. Let's say you have some C# code that you want to test for a frontend web application. A unit test is great to confirm the methods actually work inside the C# code, but what if you want to test the actual deployment? Instead of manually deploying the test over and over again, or creating a continuous delivery pipeline to test the code, you can implement a mock test. The mock test will deploy the code, confirm that the code works, and either leave the deployment as-is or delete the deployment. In typical mock tests, the resource is deleted right after the mock runs successfully.

Writing the Terraform code to test

In the previous section, you learned what unit tests and mock tests are. In this section, you'll create a Terraform module that will deploy a Virtual Network in Azure. The code that you write will be the code that's used for testing purposes.

Let's go over each portion of the Terraform code to confirm what is being deployed. To follow along with this section, you should have a text editor, like Visual Studio Code, open.

The fifth and final resource being created is for the subnet inside the virtual network. The subnet will have an address prefix (subnet range) of 10.0.1.0/24:

The variables will consist of three values:

Below is the variable configuration without any default values. This makes the code reusable, and it is easier to implement in most environments:

To pass in variables at runtime, you will use a terraform.tfvars configuration to keep the code as reusable as possible.

Below is the tfvars configuration that will be used:

With the main.tf, variables.tf, and terraform.tfvars, you are ready to start looking at Terratest to test the code you've written.

The Terratest framework can be found at GitHub. 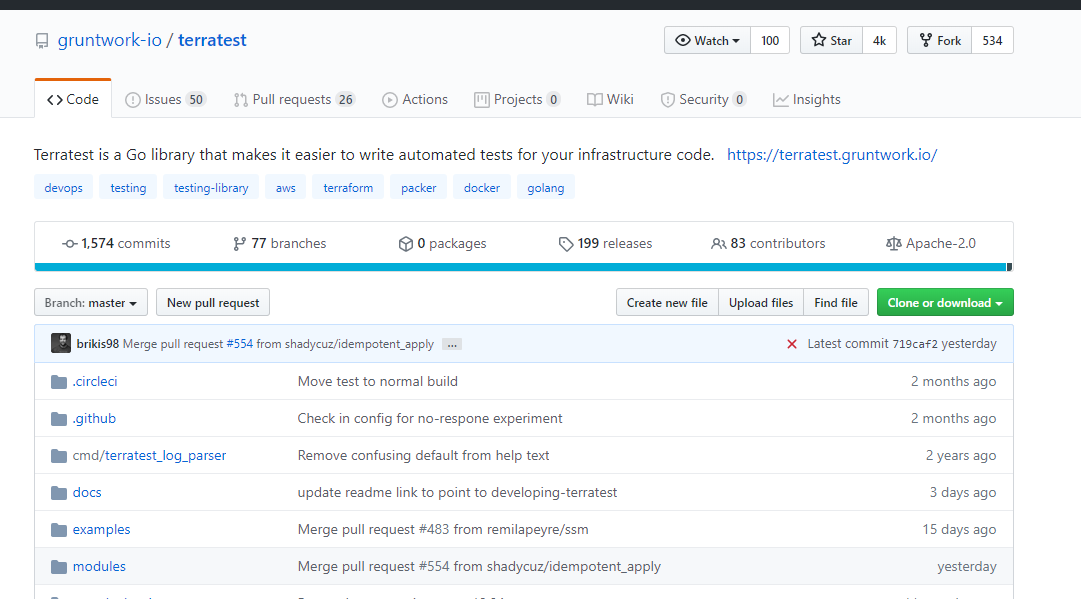 Terratest is a Go library that helps you implement Infrastructure-as-code testing. Terratest was created and is maintained by Gruntwork, a platform that provides DevOps-as-a-Service. You can learn more about Gruntwork.

Under the examples directory on the Terratest GitHub, you can see a few different examples. Let's take a look at the docker-hello-world-example:

As you can see from the screenshot below, a Docker image can be built the standard way by running the build and run commands. 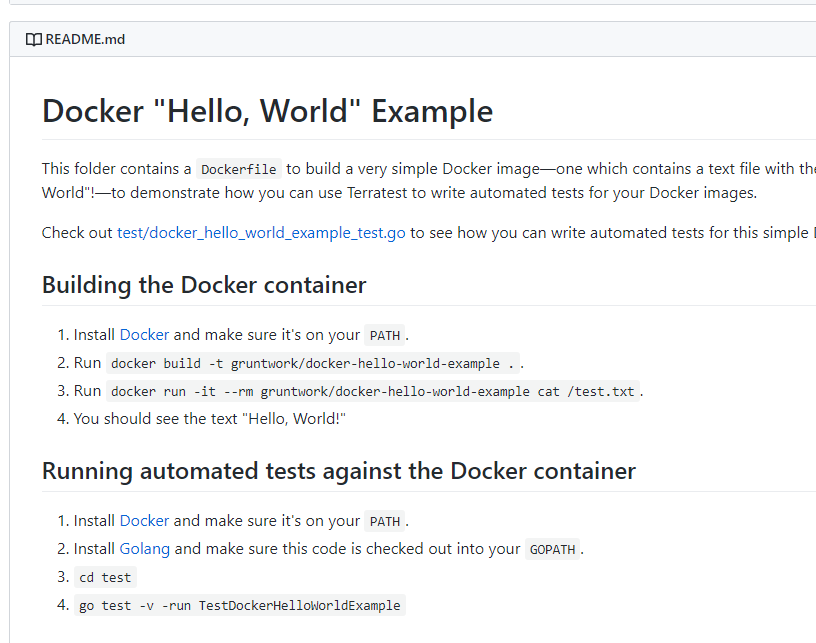 After the test is run, you will see an output that tells you whether or not the test completed successfully.

Writing the test in Terratest

Now that you have an understanding of what code will be tested and the Terratest framework, it's time to create a new test using Golang.

For this section, you should have Visual Studio Code open and create a new file in the same directory as the Terraform code. The new file can be named whatever you like, for example, terraform-test.go.

Let's first set up the package and call it test:

After the libraries are in the import block, set up the new function. The function can be named anything you'd like, but for the purposes of this post, we'll call it vnet_test. The testing library is used by calling it inside the newly created function:

Finally, you need to add the tests themselves. First, a variable will be created called terraformOptions that utilizes terraform.Options(). The code then uses a statement called defer that destroys the virtual network right after it's tested and created. After the defer statement, you will see the .InitAndApply method that initializes and creates the virtual network with Terraform:

When you have the code inside the terraform-test.go file, run the following on the command-line:

Congratulations! You have successfully created a Terraform test using Terratest.

In this post, you learned the key concepts of testing and why it's so important to implement in any code. Whether it is backend code, frontend code, or infrastructure code. You first learned about the two key types of testing, unit tests, and mock tests. You then wrote some Terraform code to start testing that creates an Azure Virtual Network. After that, you took a first look at the Terratest framework and what it has to offer. Finally, you wrote a Terratest to test the creation of the Azure Virtual Network and destroy it after the creation was successful.

For your next challenge, although not explained in this post, take a look at kitchen-terraform. Kitchen-terraform is another testing framework that is upcoming and gaining popularity.