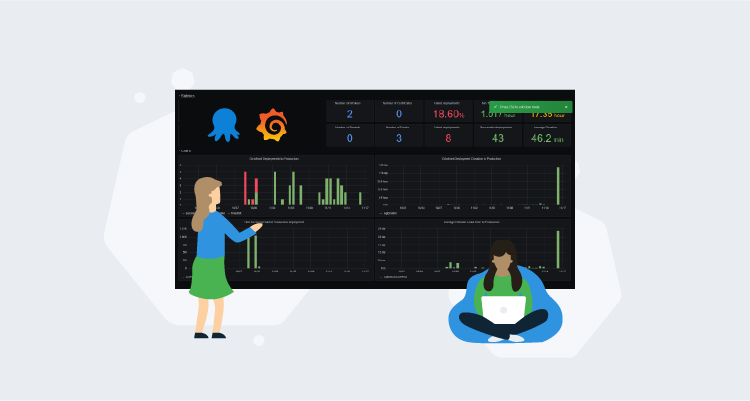 Octopus has long exposed data on deployments through the /api/reporting/deployments/xml API endpoint. With the EAP release of the Grafana datasource for Octopus, this information can be easily visualized, allowing teams to track their deployment success and frequency.

In this post and screencast, I'll show you how to install the Grafana plugin, import the sample dashboard, and customize the charts to show information important to you.

The plugin is made available through the project's GitHub releases page.

The ZIP file needs to be extracted to a subdirectory under the Grafana plugin directory. On Linux this directory is typically /var/lib/grafana/plugins, and for Windows the default directory is INSTALL_DIR\data\plugins.

For this example I am deploying to Ubuntu 20.04, and I will extract the zip file with the command:

Allowing the unsigned plugin to be loaded

Grafana makes a distinction between signed and unsigned plugins. The Octopus plugin is unsigned and must be explicitly permitted in Grafana. This is done by editing the grafana.ini file. On my Ubuntu VM this is found at /etc/grafana/grafana.ini.

The setting we need to configure is allow_loading_unsigned_plugins under the [plugins] section. This setting must list the ID of the Octopus plugin:

Grafana must be restarted to load the new configuration and to then load the Octopus plugin.

The Octopus datasource has two properties: 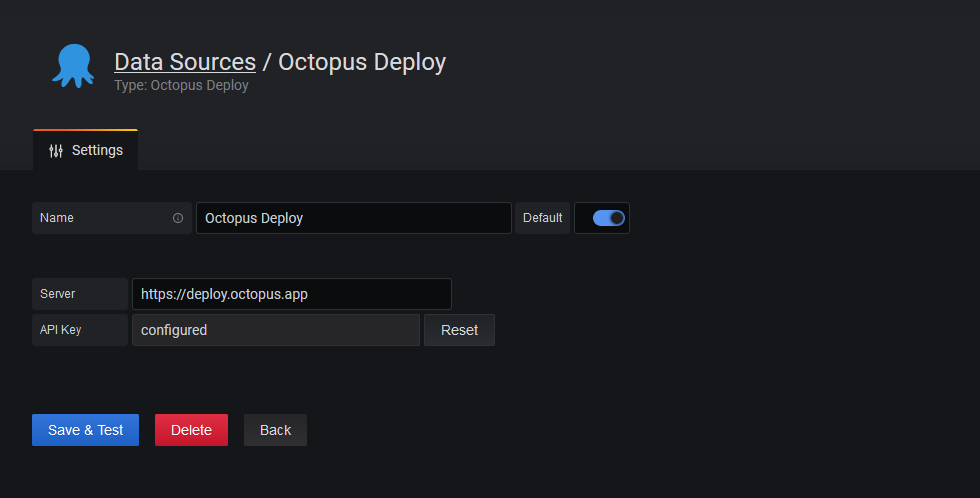 We have provided a sample dashboard that shows common deployment metrics. This dashboard is available from the Grafana dashboard gallery. To import it, click the Dashboards icon on the left hand panel, click Manage, and then click Import. The sample dashboard URL of https://grafana.com/grafana/dashboards/13413 can be loaded under the Import via grafana.com option: 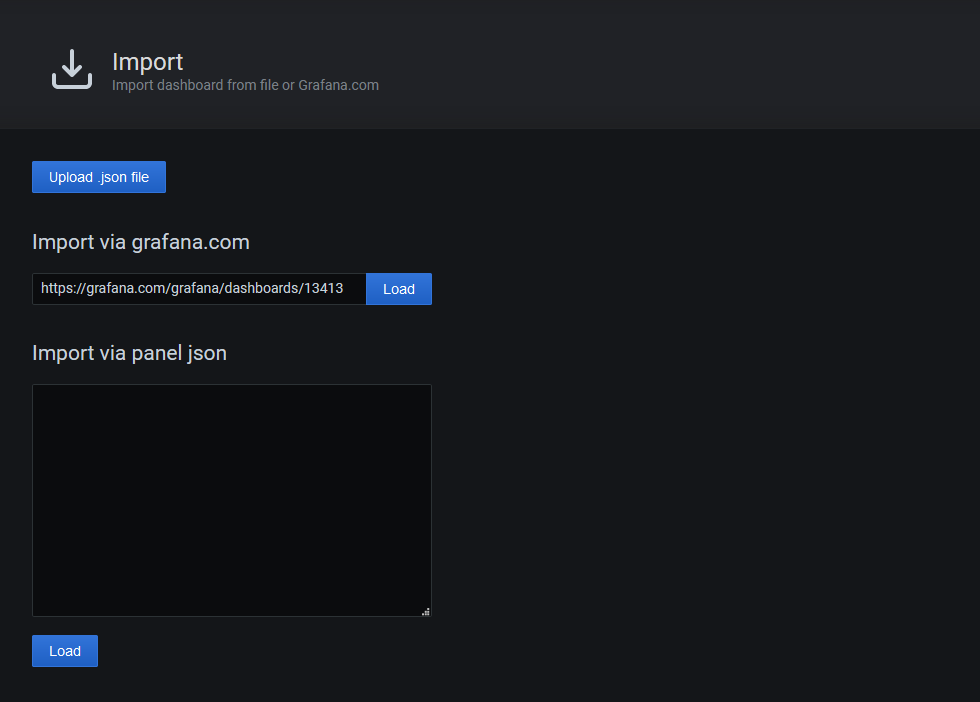 After you select the datasource created above and complete the import, the following dashboard is displayed: 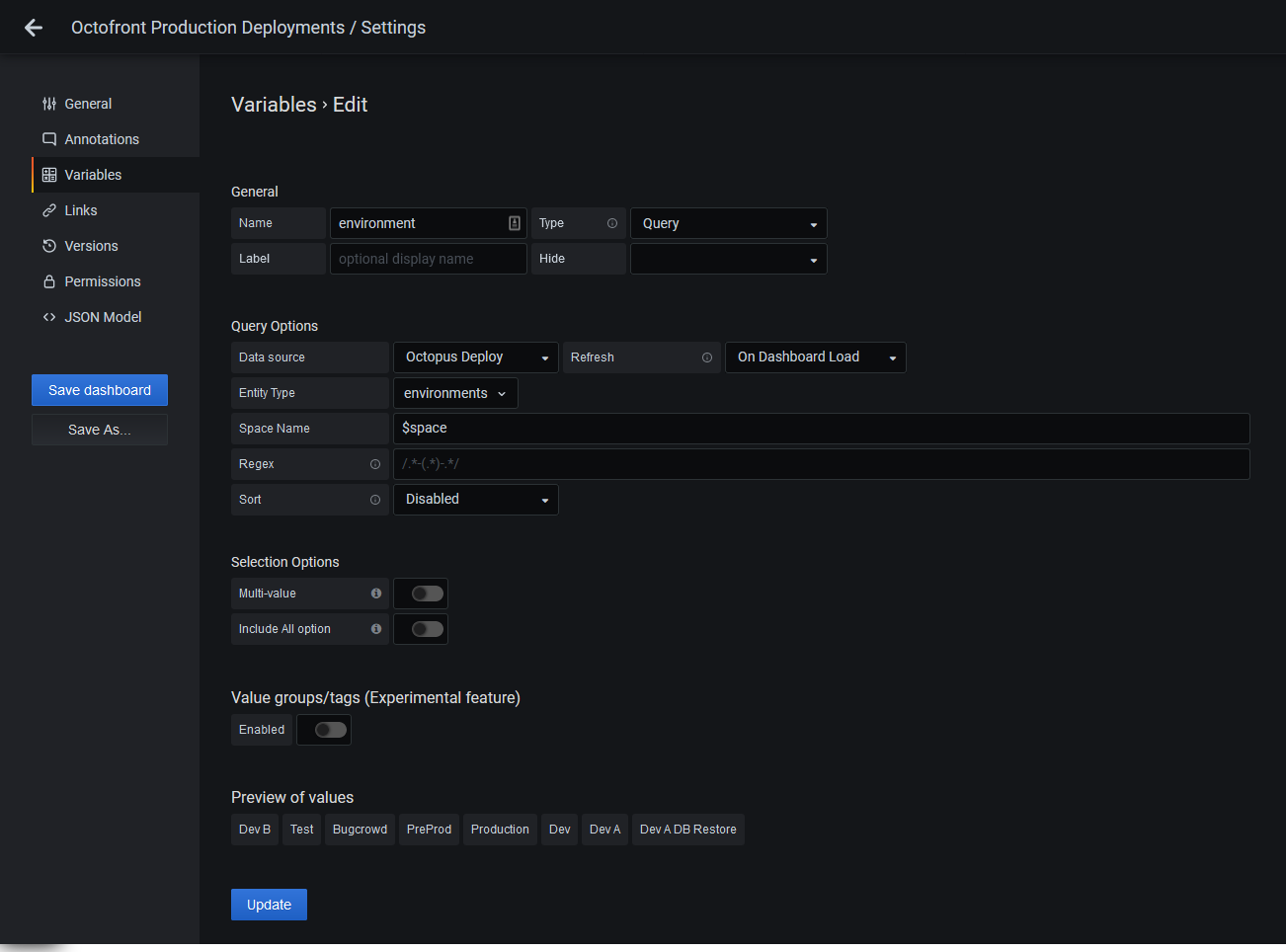 An example of the environments configured as a query variable.

Variables used in a query.

A number of metrics are exposed by the plugin:

We hope the Grafana plugin provides insights into how well your deployments are progressing. This is an EAP release, so we do expect bugs and functionality gaps, and it is only recommended for testing at this stage, but if you have any suggestions or issues please reach out to us via the usual support channels.