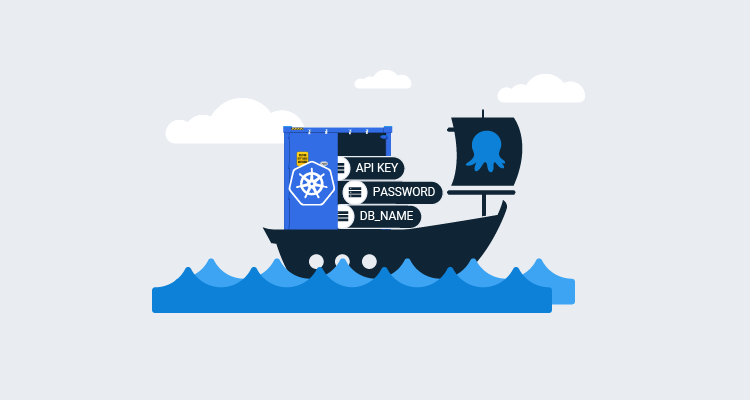 New with Kubernetes 1.16 is the ability to have all the values of a config map or secret exposed as environment variables in a pod. With Octopus 2020.5, these new envFrom fields have been exposed via the Deploy Kubernetes containers step. When combined with the ability to deploy resources from raw YAML, we can create a workflow where groups of Octopus variables are exposed to a container without tediously mapping them one-to-one.

In this blog post, we’ll look at how to pass groups of Octopus variables directly to containers in a streamlined fashion.

In Octopus we capture these variables in a format that will later allow us to loop over them with a template, which looks like GroupName[VariableName].Property. This means we end up with three Octopus variables called: 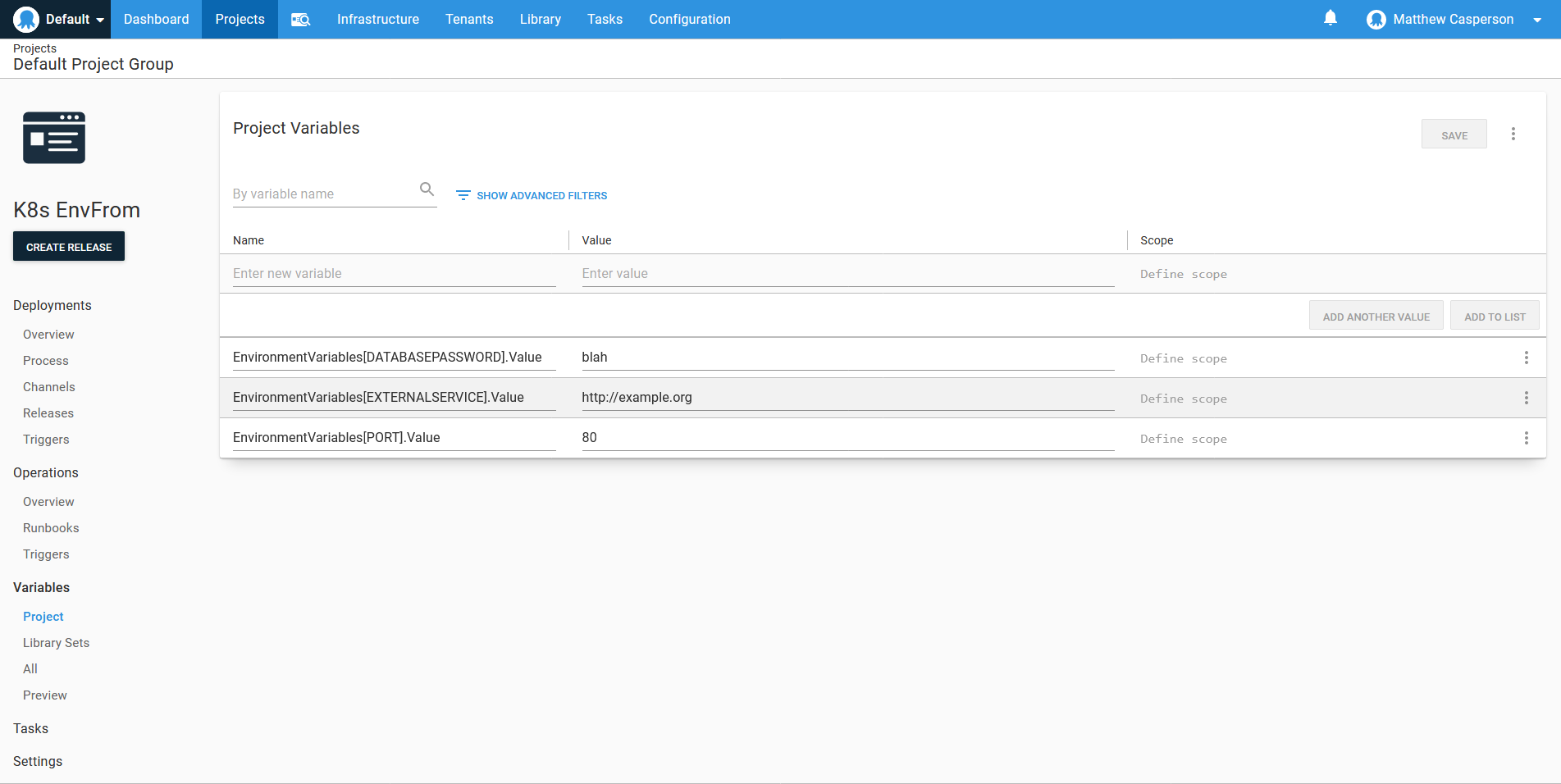 One of the features in the Deploy Kubernetes containers step is called Custom Resource. We’ll use this feature to create the secret that holds our environment variables.

The Custom Resource feature is not enabled by default, so we must first enable it by clicking the CONFIGURE FEATURES button:

The Deploy Kubernetes containers step is an opinionated way to deploy Kubernetes resources, and one of those opinions is that resources that support the main deployment, like secrets and config maps, are treated as immutable.

In practice, this opinion that supporting resources be treated as immutable means that config maps, secrets, or custom resources created by the Deploy Kubernetes containers step are given a unique name with each Octopus deployment. This is done automatically by Octopus, but it’s important to understand that the name assigned to the custom resource is not the final name of the resource when it’s deployed.

Custom resources are created with raw YAML. We also have access to the Octopus template features, which we’ll use to loop over each of the variables we defined earlier. The resulting custom resource looks like this:

To expose the secret as environment variables, we expand the Secret Environment Variables section of the container definition and click the ADD ALL ENVIRONMENT VARIABLES FROM A SECRET button.

For convenience, we’ll create a load balancer service to expose our container. This will give us a public IP to point our browser at to test the sample web application:

Opening up the load balancer IP address in a web browser shows the three environment variables exposed via the secret: 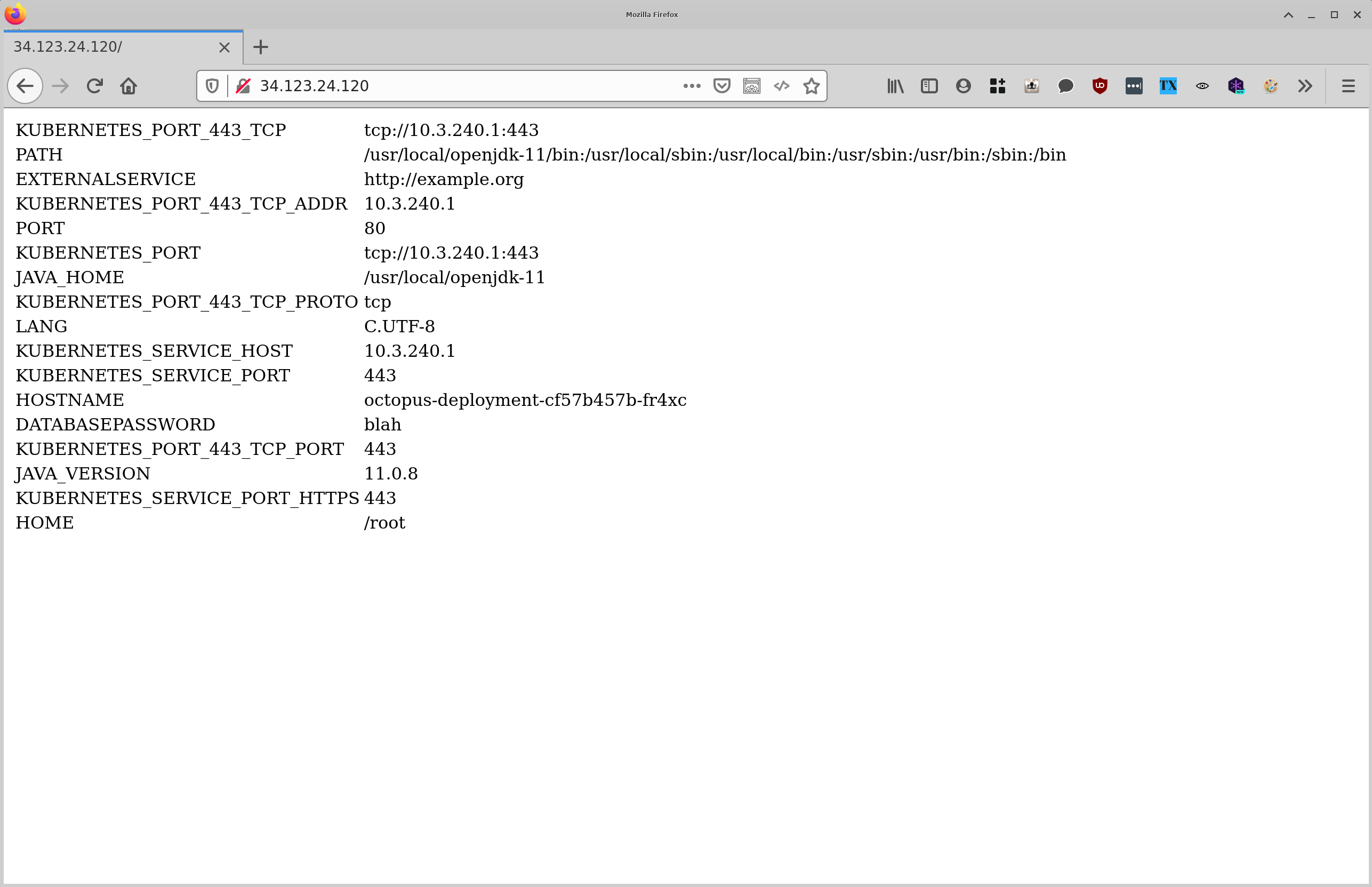 Thanks to the fact that the Deploy Kubernetes containers step ensures each custom resource has a unique name, and is therefore essentially immutable (at least as far as the deployment process is concerned), we can also be assured that more advanced strategies like rolling or blue/green deployments won’t leave old Kubernetes deployments in an undefined state.

This combination is a powerful and convenient solution to the common issue of externalizing many variables, and we hope it will empower teams while deploying Kubernetes applications.