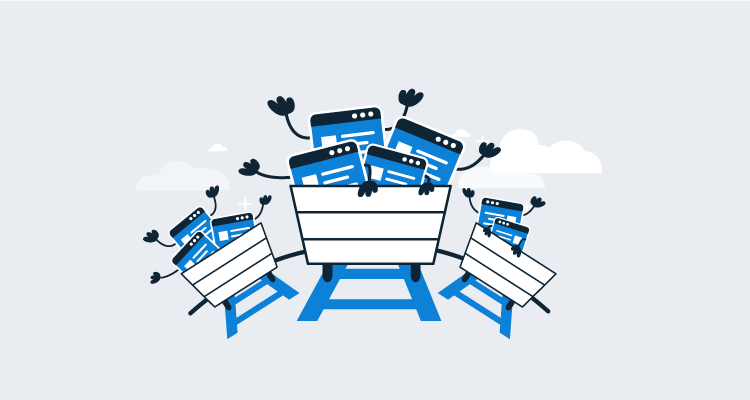 My previous post was a deep dive into the new Deploy Child Octopus Deploy Project step template and covered a variety of scenarios, but it didn't include multi-tenancy.

In this post, I cover the multi-tenancy functionality of the new step template, and how you can use it to better manage your multi-tenancy releases.

This post assumes you read the previous post. It will touch on similar topics, but it isn't a full rehash.

Like the previous post, I have a sample application where each component is an Octopus Deploy project.

There are a few key differences:

These rules replicate some of the complexity of the real-world.

Here are our sample customers:

Some customers choose a single massive project to handle everything. They deploy their software in one go, but outage windows are quite large because unchanged components are also redeployed.

This can lead to the question, "How do I skip steps where the package hasn't changed?".

The problem with this approach is that a web deployment rarely "just" pushes out a server package. Additional steps are needed to configure items such as branding or running integration tests.

Each component in Octopus Deploy needs to be assigned to a unique project. A parent project will handle the orchestration. Until now, there hasn't been a step to solve several use cases seen in the real-world:

You'll have a parent project for your application with a single deployment process. You shouldn't have to worry about tenant and project assignments. It has the necessary guard clauses to ensure the same process will work for the Internal Customer with all the bells and whistles, and for Pet Life with only the core components. 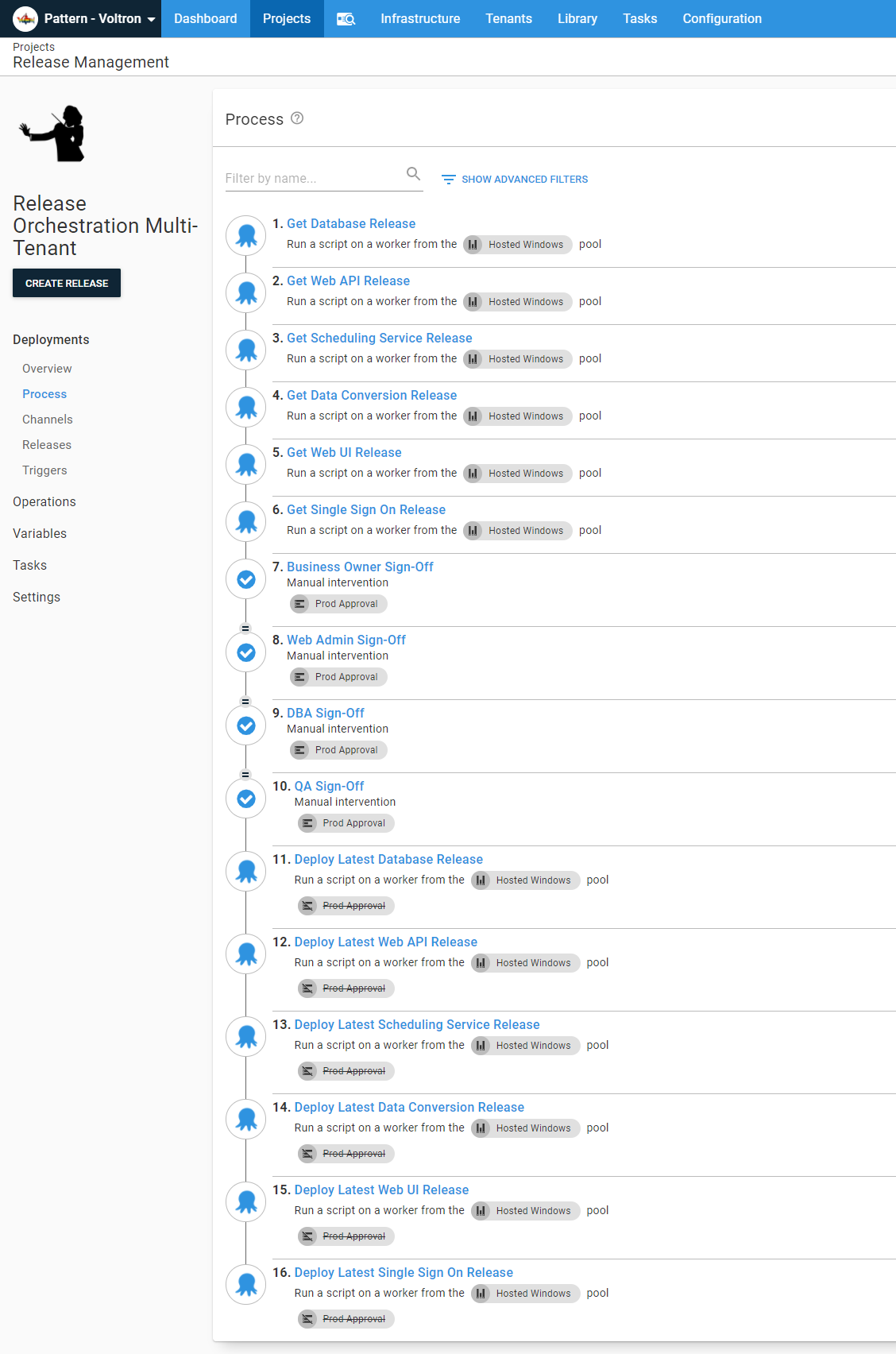 Before proceeding, let's examine how the step template handles different use cases for a multi-tenant parent project.

Tenants not assigned to child projects

The step template will automatically handle all the possible multi-tenant use cases:

One of the step template's core business rules is to pick the last successfully deployed release in the source environment. Most logic is focused on calculating that source environment, and runs through 4 logic gates: 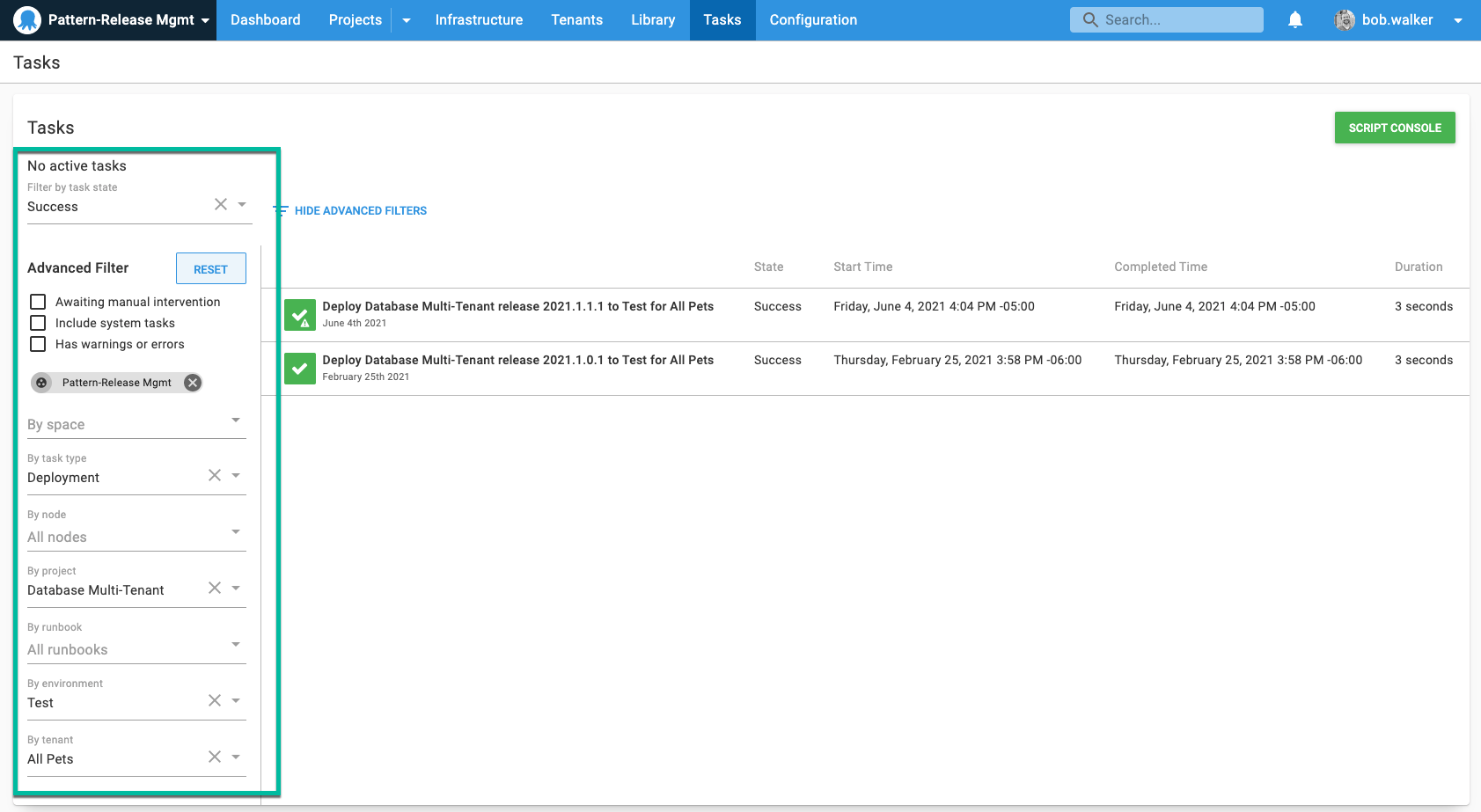 When the destination environment is the first phase in the channel's lifecycle, it will find the newest release created for the channel matching the release pattern provided.

Multi-tenancy adds a layer of complication. Consider this scenario:

What release will be picked by the step template when it promotes the latest 2021.1.0.x release to Staging? The answer:

Multi-tenancy adds that complexity because:

Fortunately, Octopus already figures this out for us. If we pick the 2021.1.0.15 release from the Filter by release drop-down menu, the dashboard would change to this:

This section walks through configuring some common parent project scenarios.

You can view the final project on the samples instance by logging in as a guest.

There is some scaffolding to configure for users and lifecycles. Please see the scaffolding section in the previous post.

After configuring the users and lifecycles, you need to create a project. When creating the project, remember to select the new lifecycle created above. 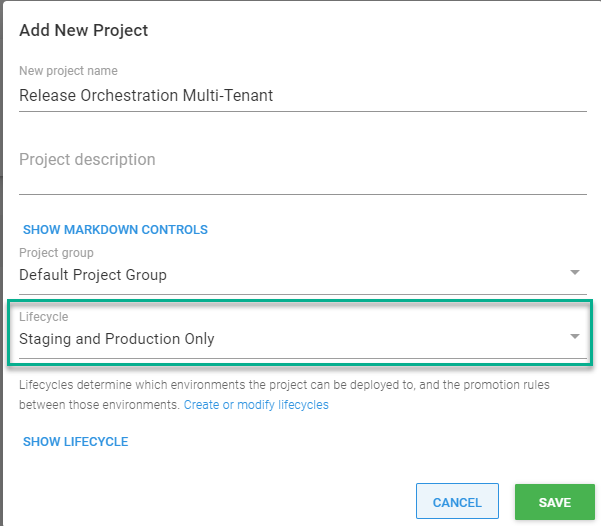 Ensure the project is configured to require a tenant for all deployments. 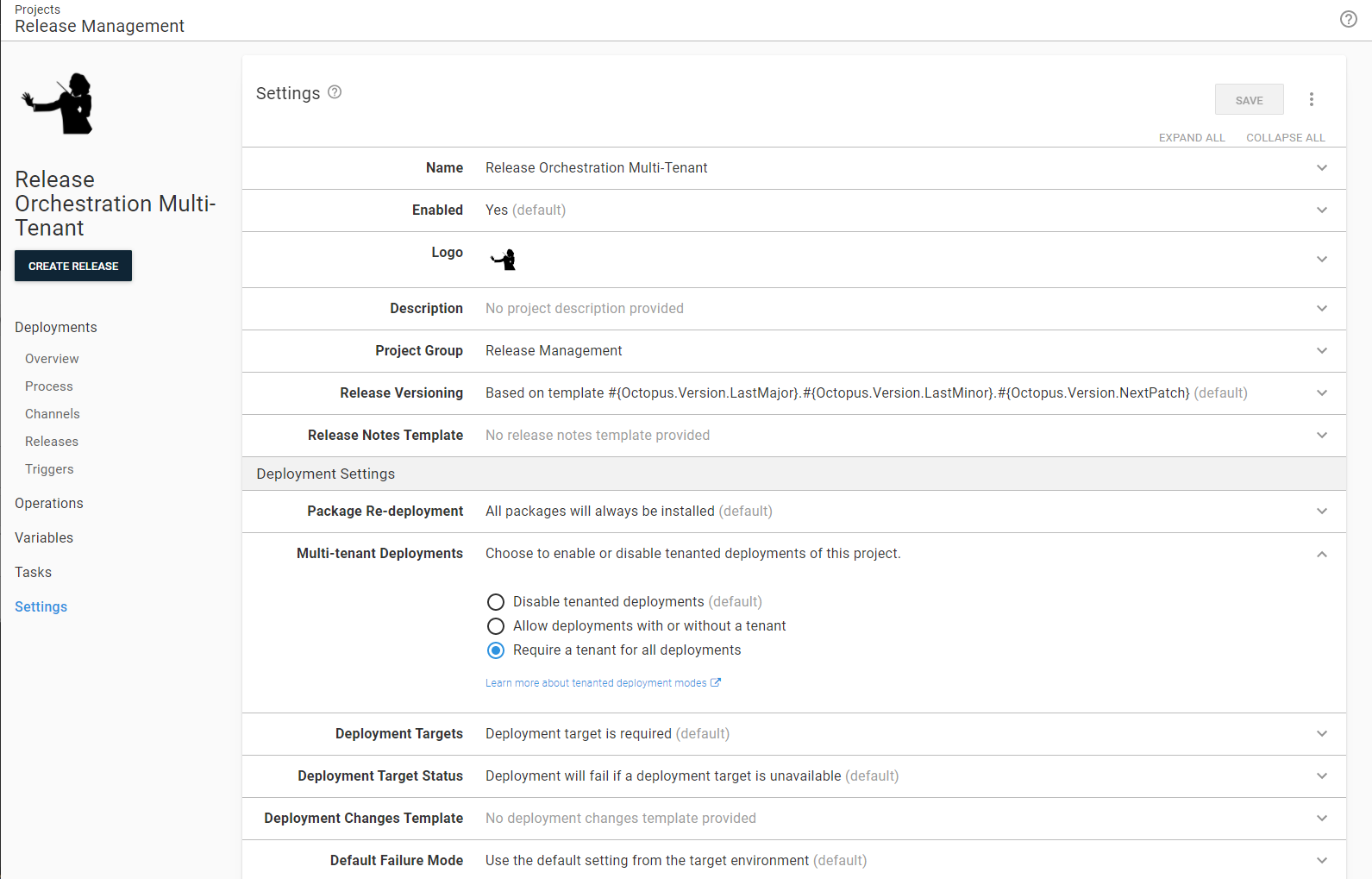 After that, navigate to the variables screen and add the API key and the release pattern.

For each tenant, connect the newly created project for the Staging and Production environments. 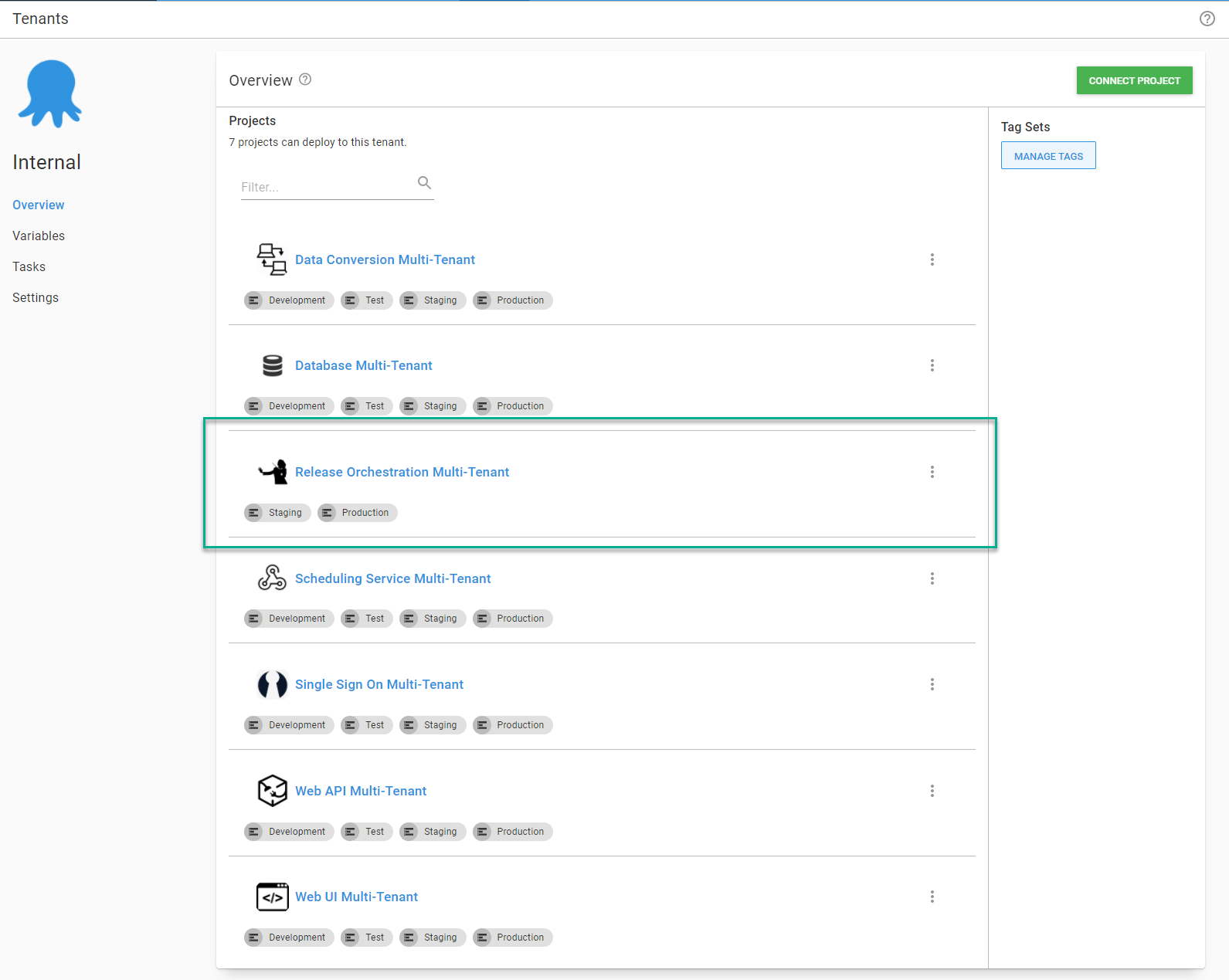 The example scenarios assume a build server will deploy to all the tenants in Development. The step template was not written with that assumption. Because Development is the first phase in the channel's lifecycle, it will find the latest release created matching the release pattern provided.

Scenario: Deploying the latest release for the tenant from Test to Staging

In this scenario, we configure the parent project to deploy all the child components from Test to Staging in a specific order. For now, we're not concerned with approvals. 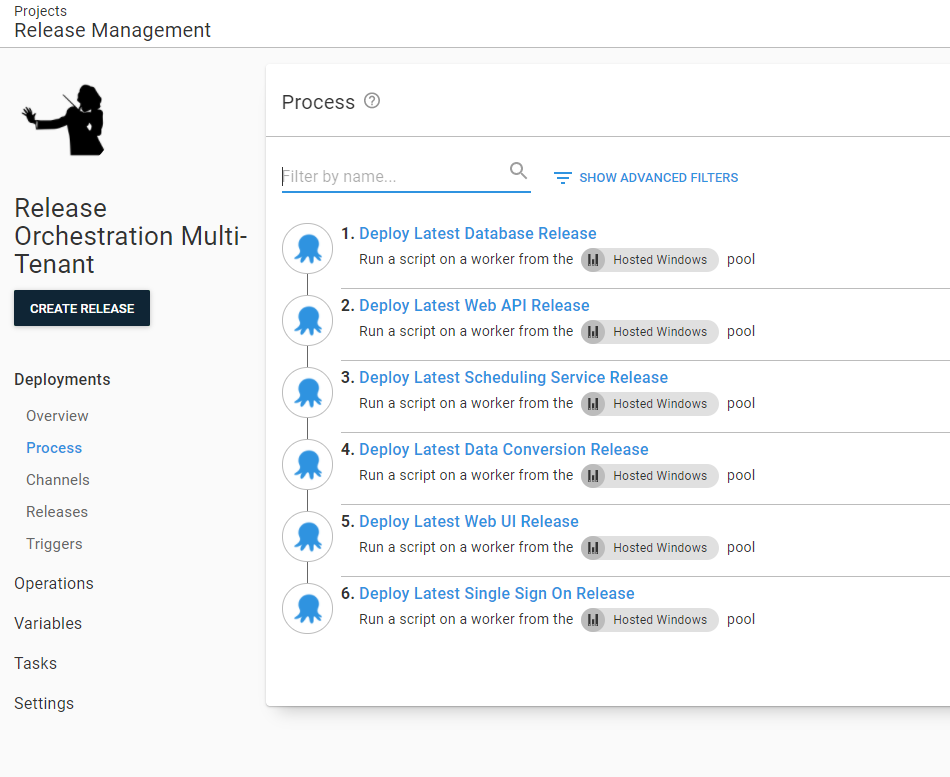 Here are the values for each parameter:

Create the release and deploy it

After adding and configuring the steps, you create a release. I'll be making many changes to the parent project in this post; you might see 2021.1.0-RCx for the release numbers.

First, deploy the release to the All Pets tenant.

Wait for the release to finish. For the Web UI project, you should see release 2021.1.0.1 get picked up to deploy. 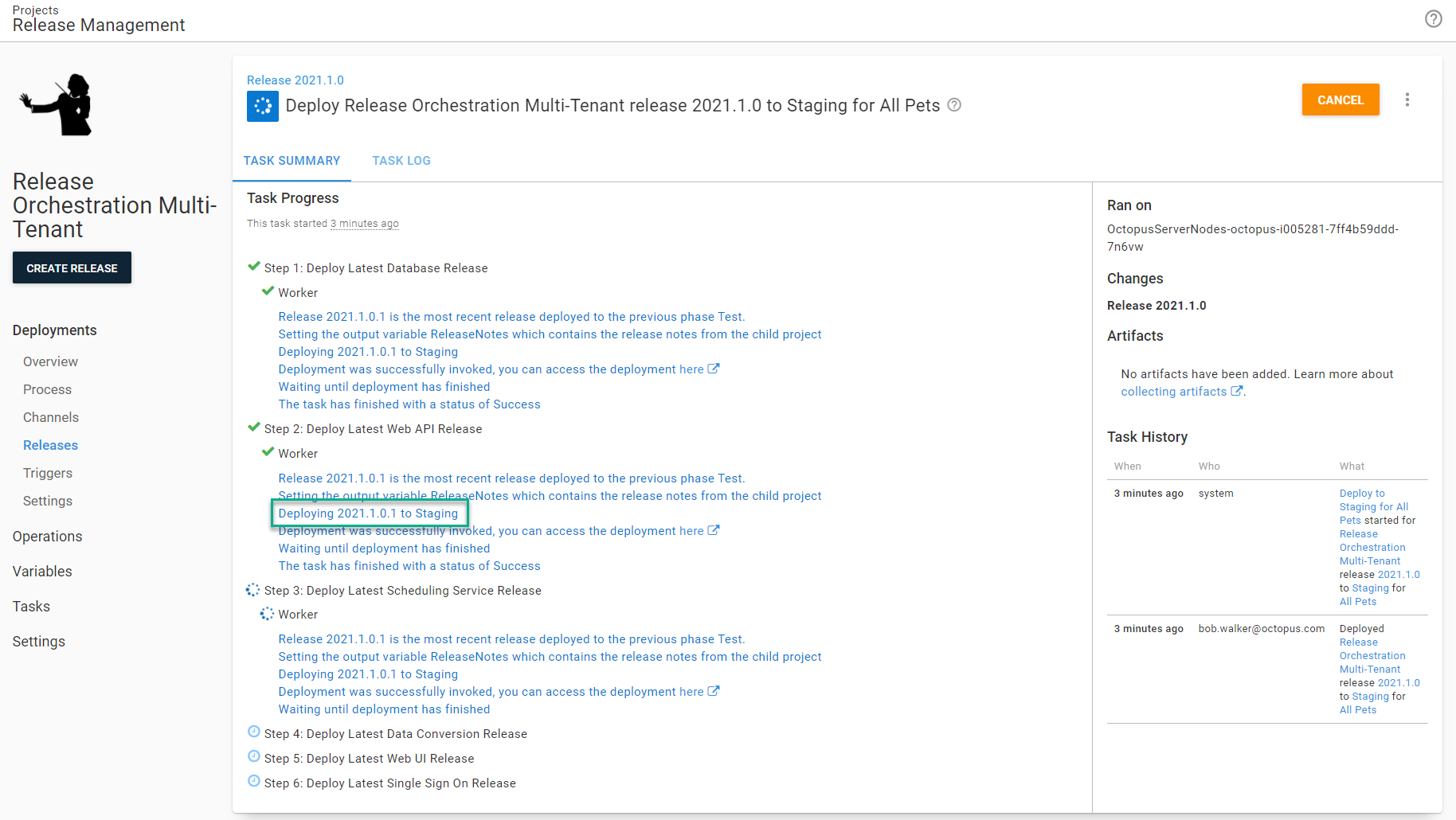 Deploy the release for tenants not assigned to Test

Now let's see when the tenant is not assigned to Test, such as the case with Pet Life, Pet World, and Dogs Only. 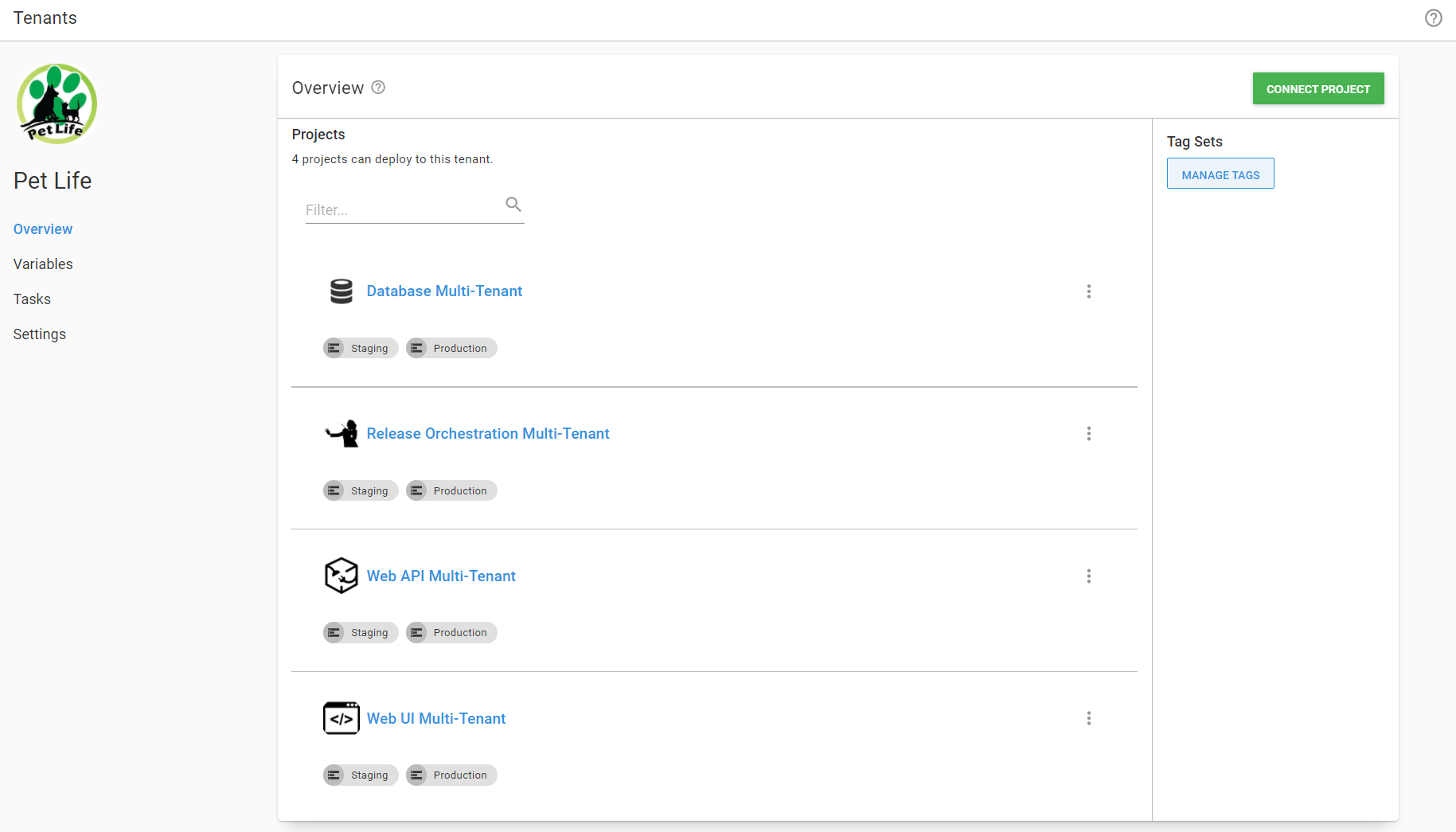 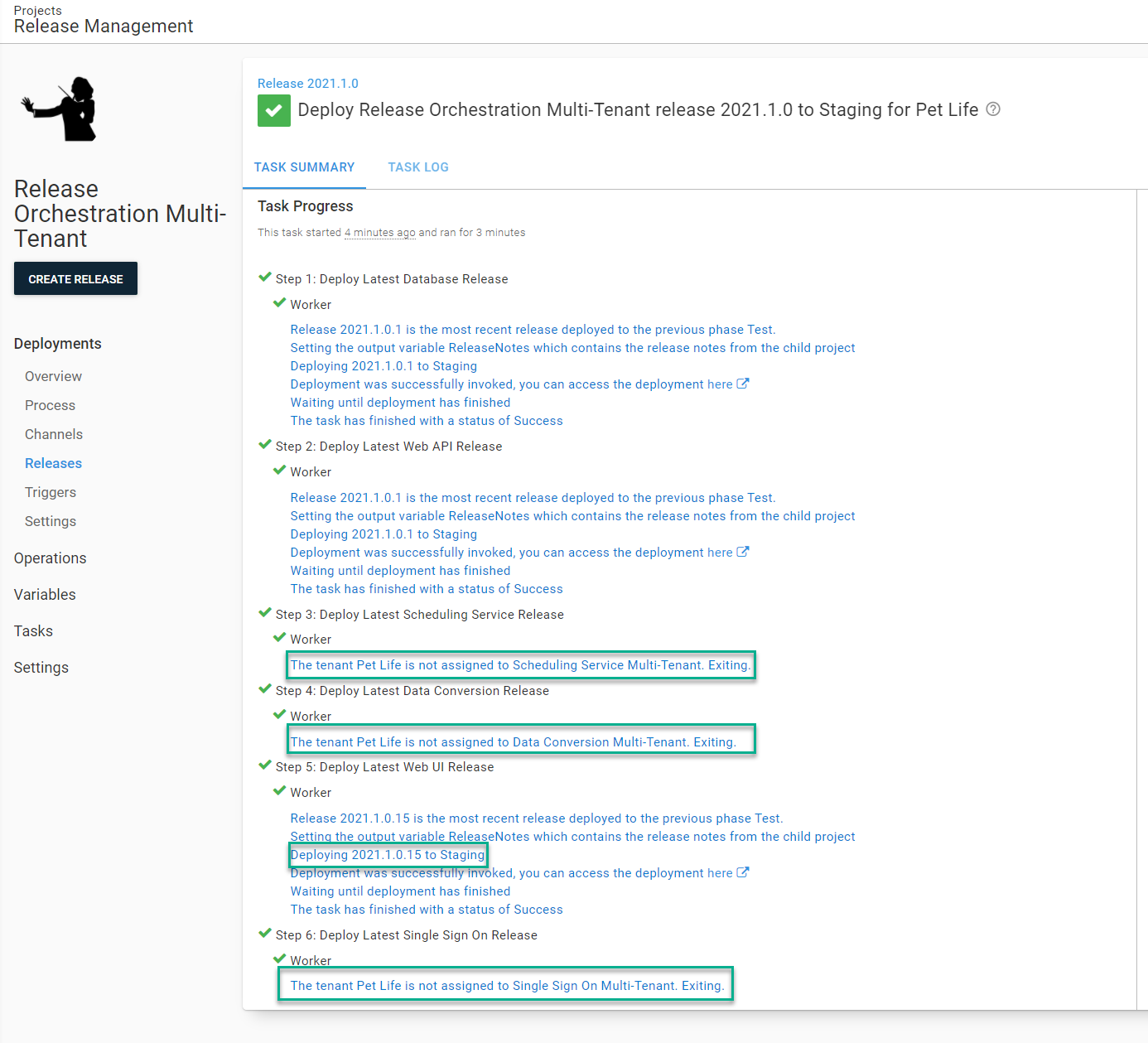 So far, we've configured the parent project to do deployments only. If we stop here, we're in a better position than before. We can push out all the components assigned to a tenant in a specific order. Also, the process will skip steps not assigned to the tenant automatically. When managing multi-tenant applications, this alone is a win. But we can take this a step further. Let's move to approvals.

Scenario: Approval in the parent project

All the approvals are in the parent project and flow down to the child project in an ideal configuration.

What is being approved though? With Octopus Deploy, all manual interventions occur as part of a deployment. It's a chicken/egg scenario. To solve this, the step template provides "what-if" functionality, which will do everything up to the point of deployment. Also, the step template gathers all the release notes to aid in approvals.

The flow of the parent project is:

When running in what-if mode, the following output parameters are set for use later in the process:

Create the what if steps

To configure this, first clone all the existing steps. Do that by clicking on the overflow menu (three vertical ellipsis points) next to each step. 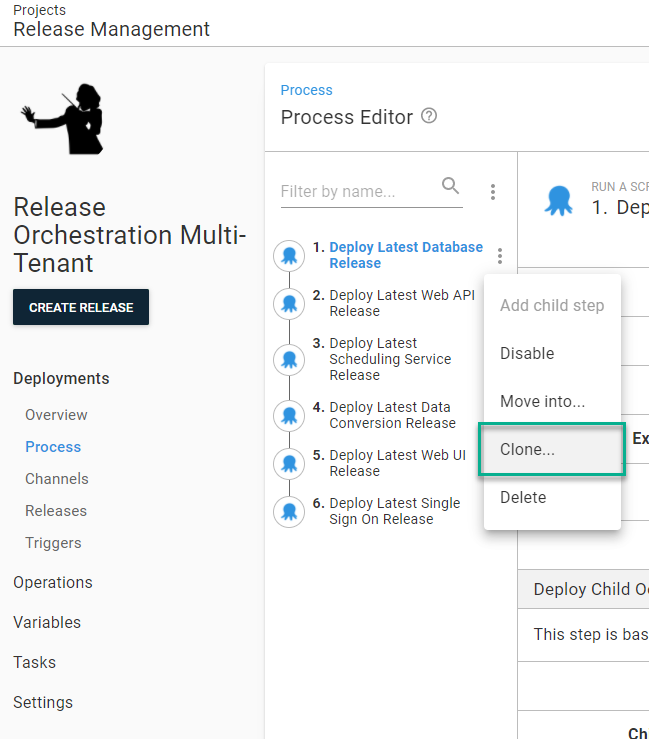 I avoid duplicating effort. Let's add that as a variable. 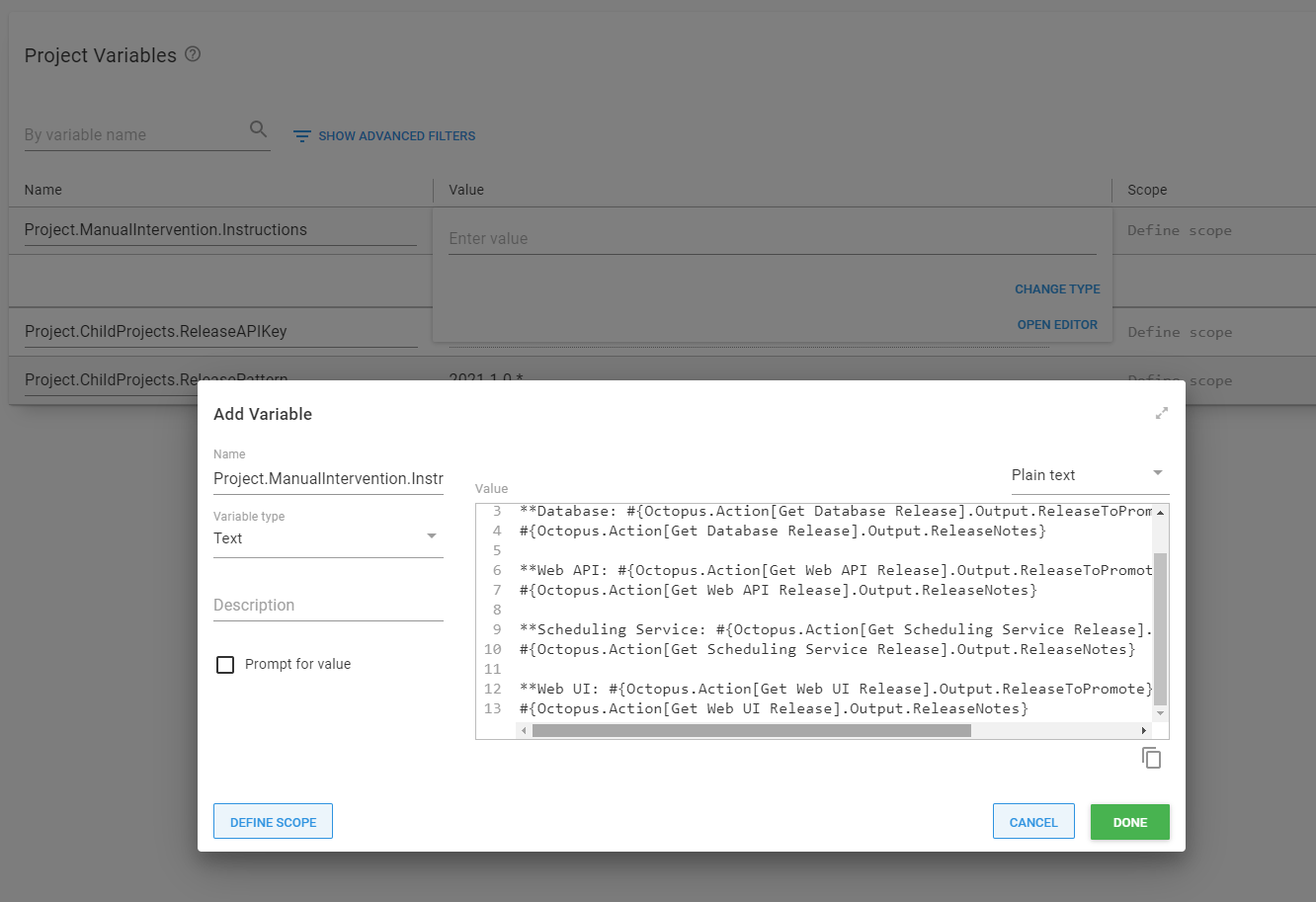 Now we can add the manual interventions with the instructions sent to that new variable and only run for the Production environment. 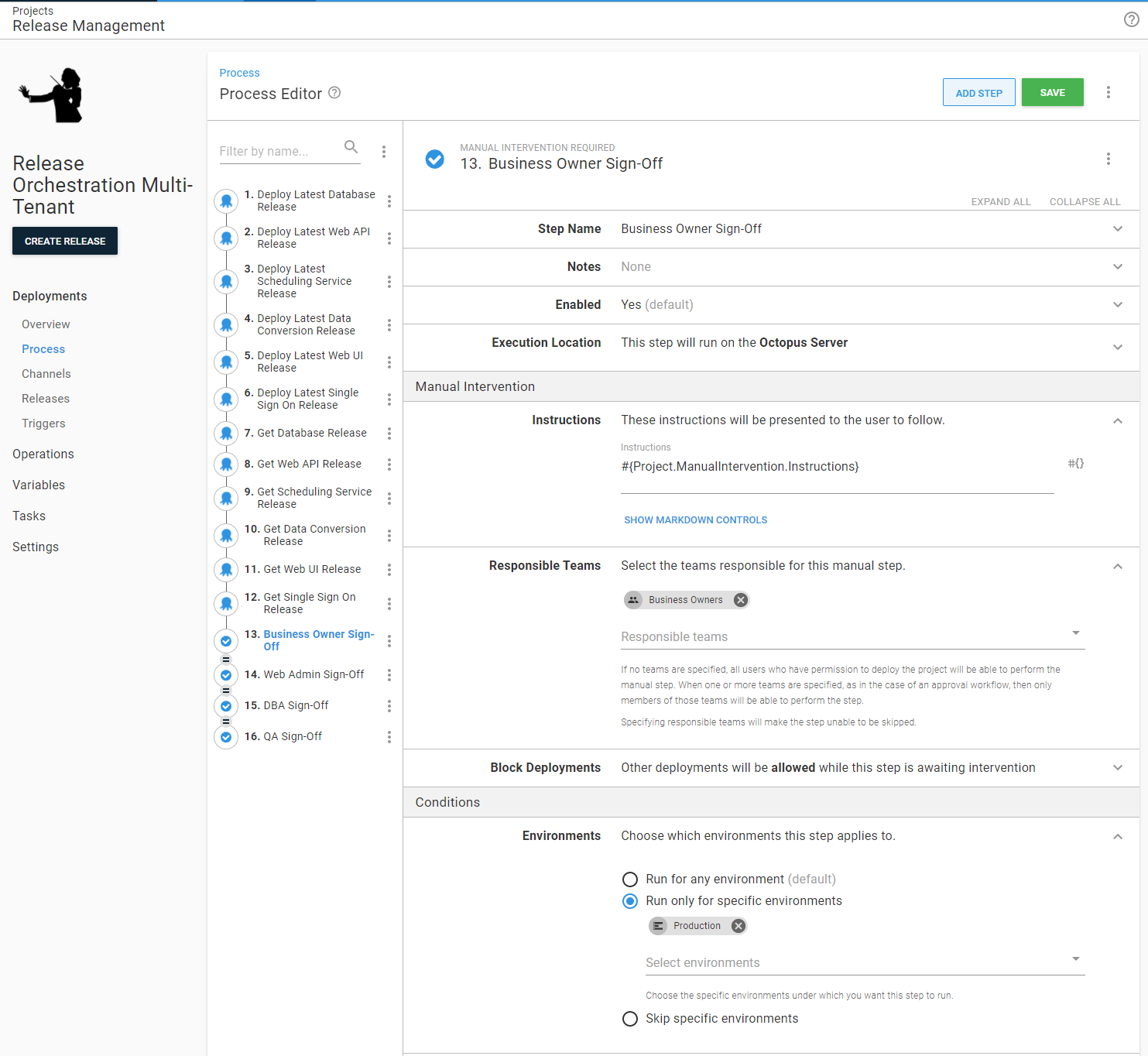 After the deployment, approvals don't make sense, so reorder the steps by clicking the overflow menu (three vertical ellipsis points) next to the Filter by name text box, and selecting the Reorder button. 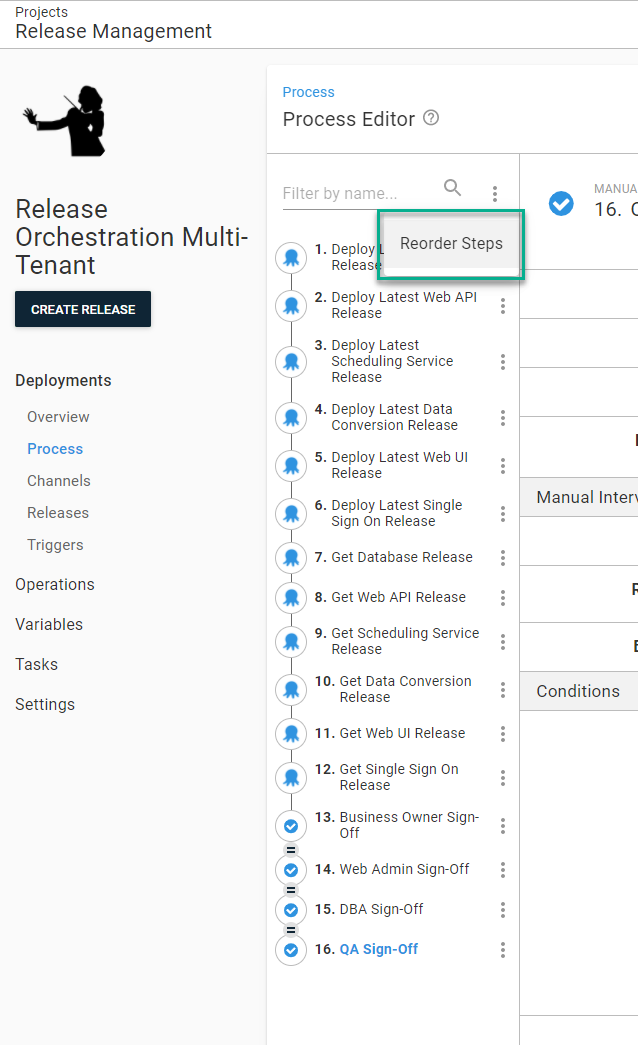 Move all the steps you set to do a "what if" above the "non-what if" steps. When finished, your process should look similar to this: 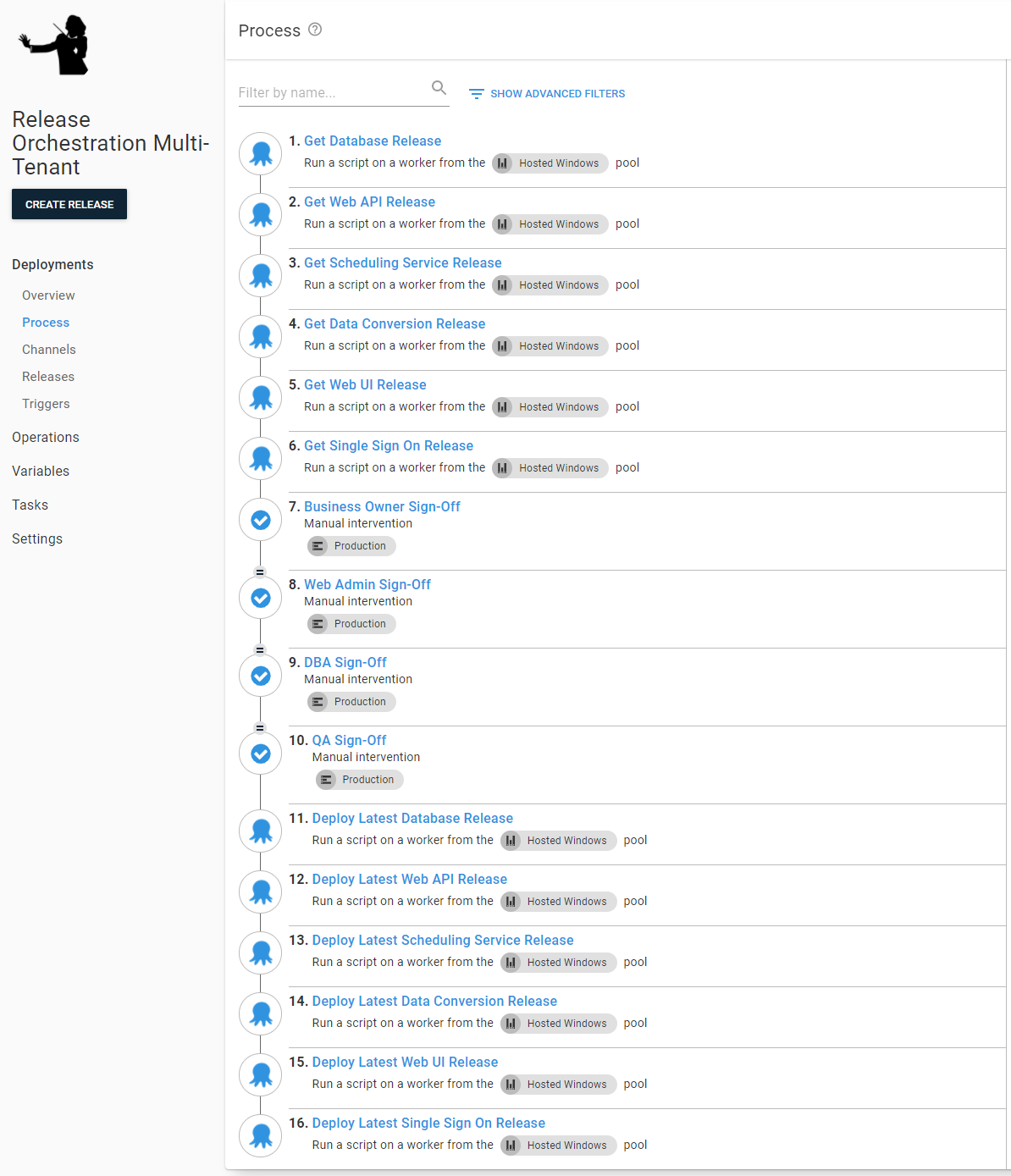 Create a new release and deploy it to Staging for one of the tenants. Once that release is complete, promote it to release to Production. 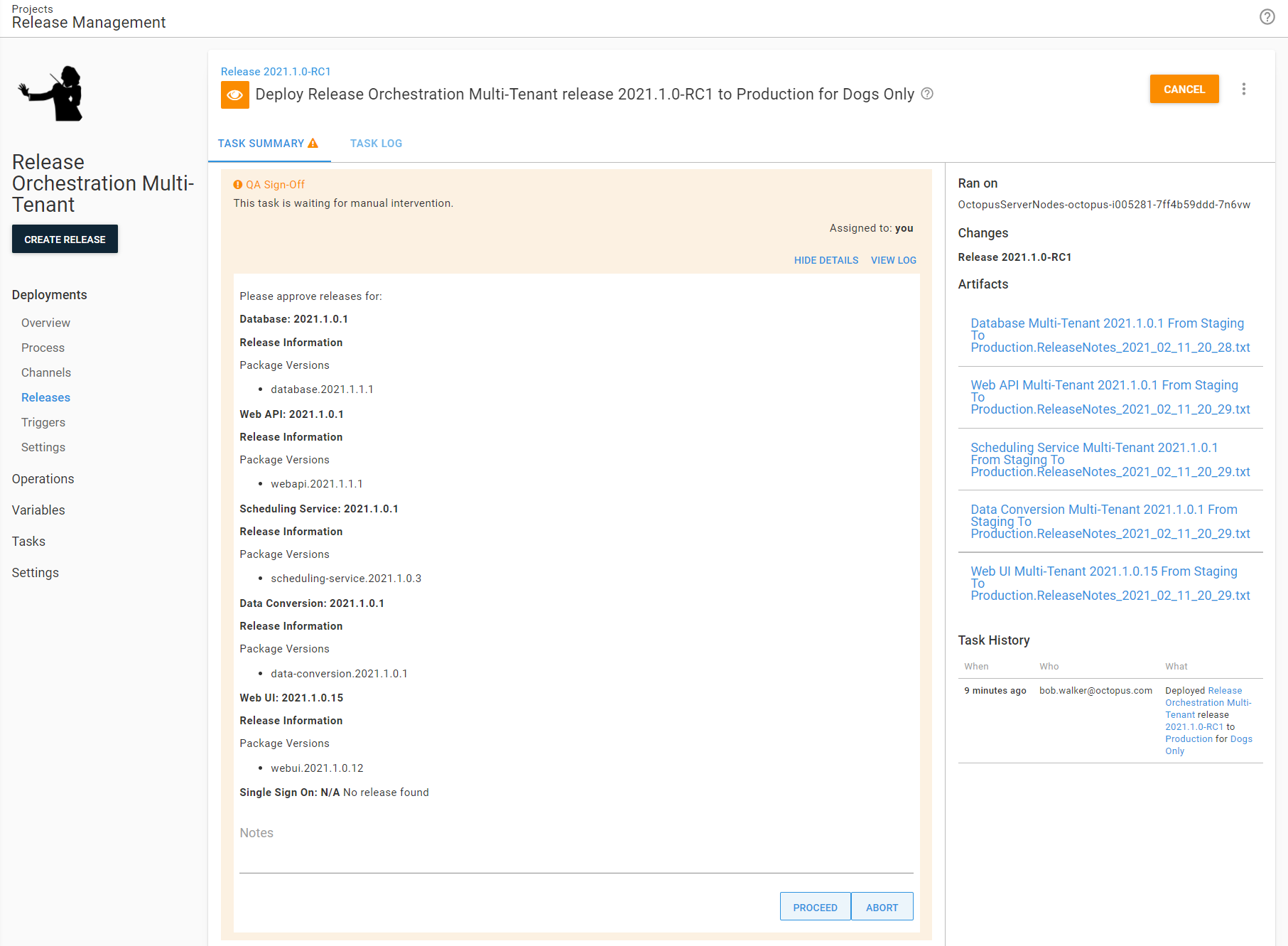 After every group has approved the release, the deployments will kick-off. If you go to a specific deployment, you'll see a message similar to this in the child projects: 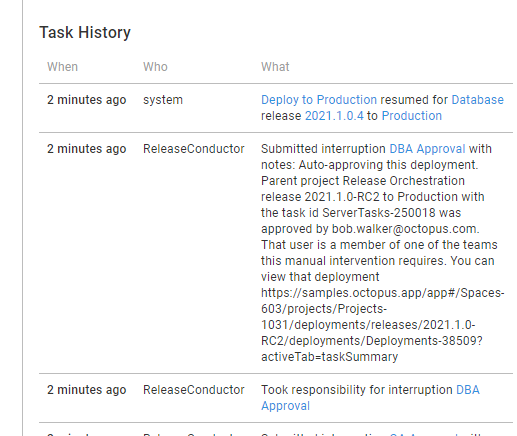 The release to Production is now complete. You have a single place to approve all the child project deployments for a specific tenant.

Sometimes, specific customers are required to sign-off on a release before going to Production. It's unlikely they'll approve a deployment during the actual deployment. More commonly, they'll approve on Tuesday for deployment on Thursday, for example. Also, let me remind you of this rule from earlier:

Certain customers, such as All Pets and Pet World must give their consent before a release is deployed to the Production environment.

All Pets and Pet World require specific approval. All the other customers only require a single approval, which will occur for the Internal tenant.

To avoid a deployment sitting in Production awaiting manual intervention for days, you can have a Prod Approval environment that sits between Staging and Production.

The Prod Approval environment will only be used for parent projects. Child project's lifecycles will remain the same.

This scenario walks through the steps to add the Prod Approval environment to a multi-tenant application to meet those rules.

Add the new environment and configure the lifecycle

Add the Prod Approval environment. You will notice this environment in my screenshot sits between Staging and Production on this page. I clicked the overflow menu to reorder the environments on this page.

Now the new environment has been added, update the lifecycle used by this release orchestration project. 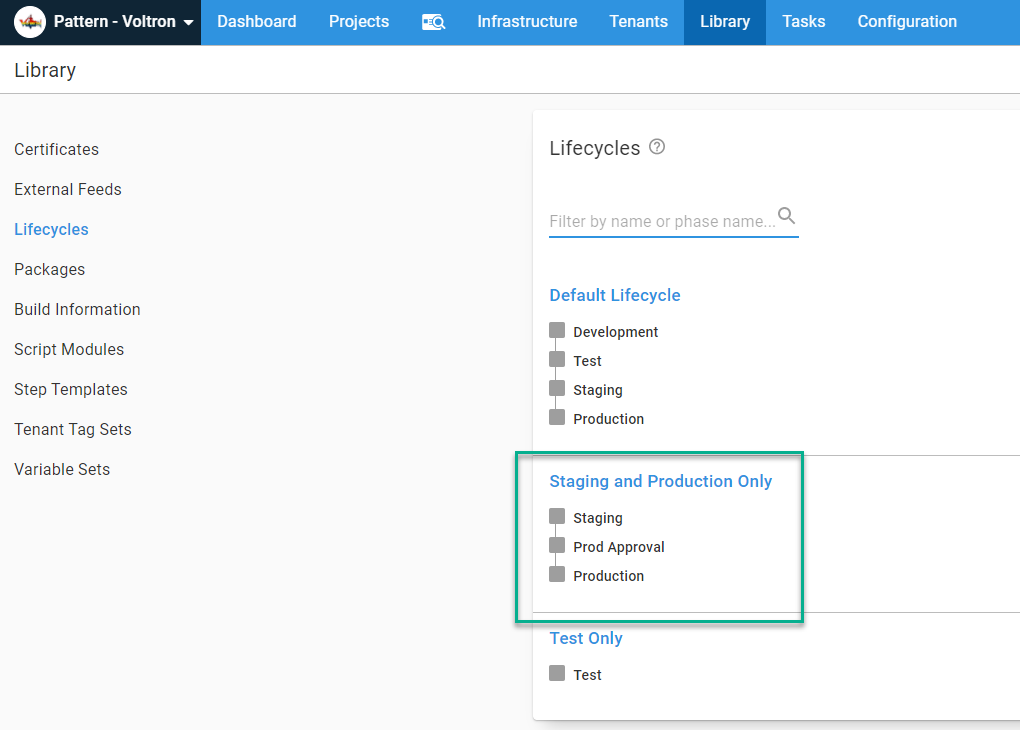 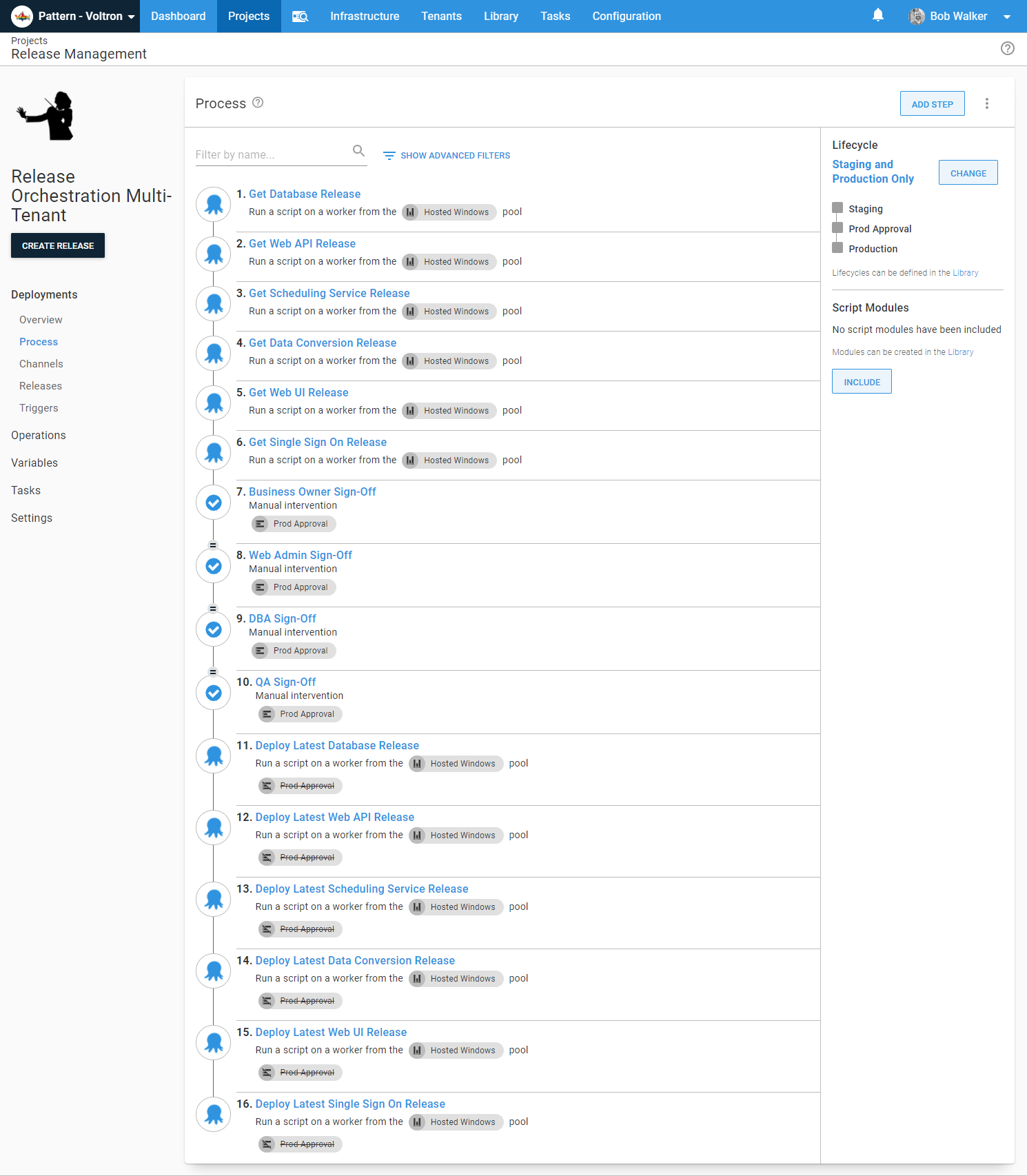 Next, navigate to the variables screen and add in two new variables:

Go into each step implementing the Deploy Child Octopus Deploy Project and update the following parameters: 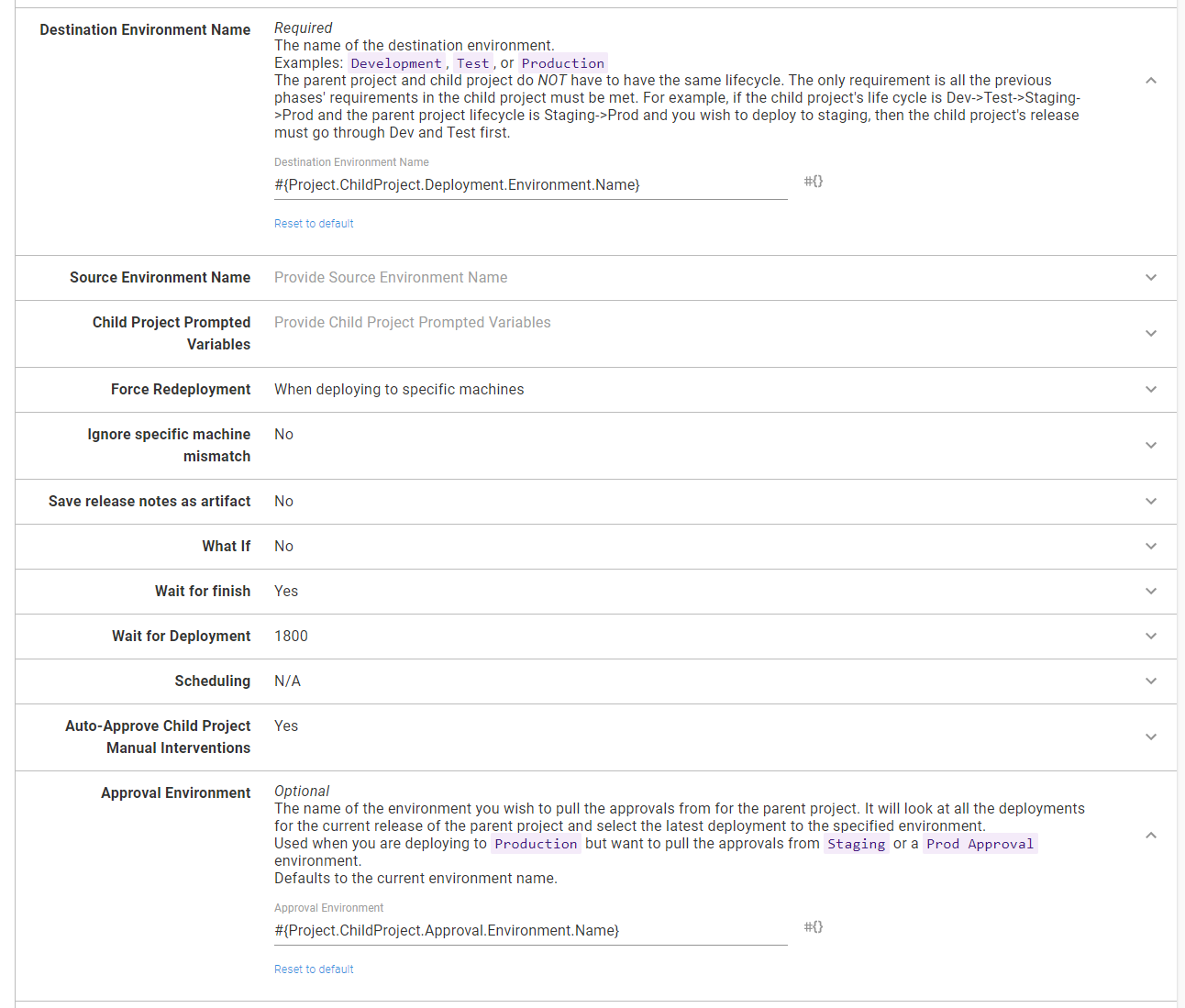 By doing this, we're telling the step template to pull approvals from the Prod Approval environment rather than the Production environment during a Production deployment. That means we can approve at 11 AM and schedule it to deploy at 7 PM.

Finally, set the approval tenant. By default, the approval tenant is the current tenant's name. That default will only apply to All Pets, Pet World, and Internal. Everyone else will use Internal. There are several ways to accomplish this. I'm going to use a project variable template with the default value set to Internal: 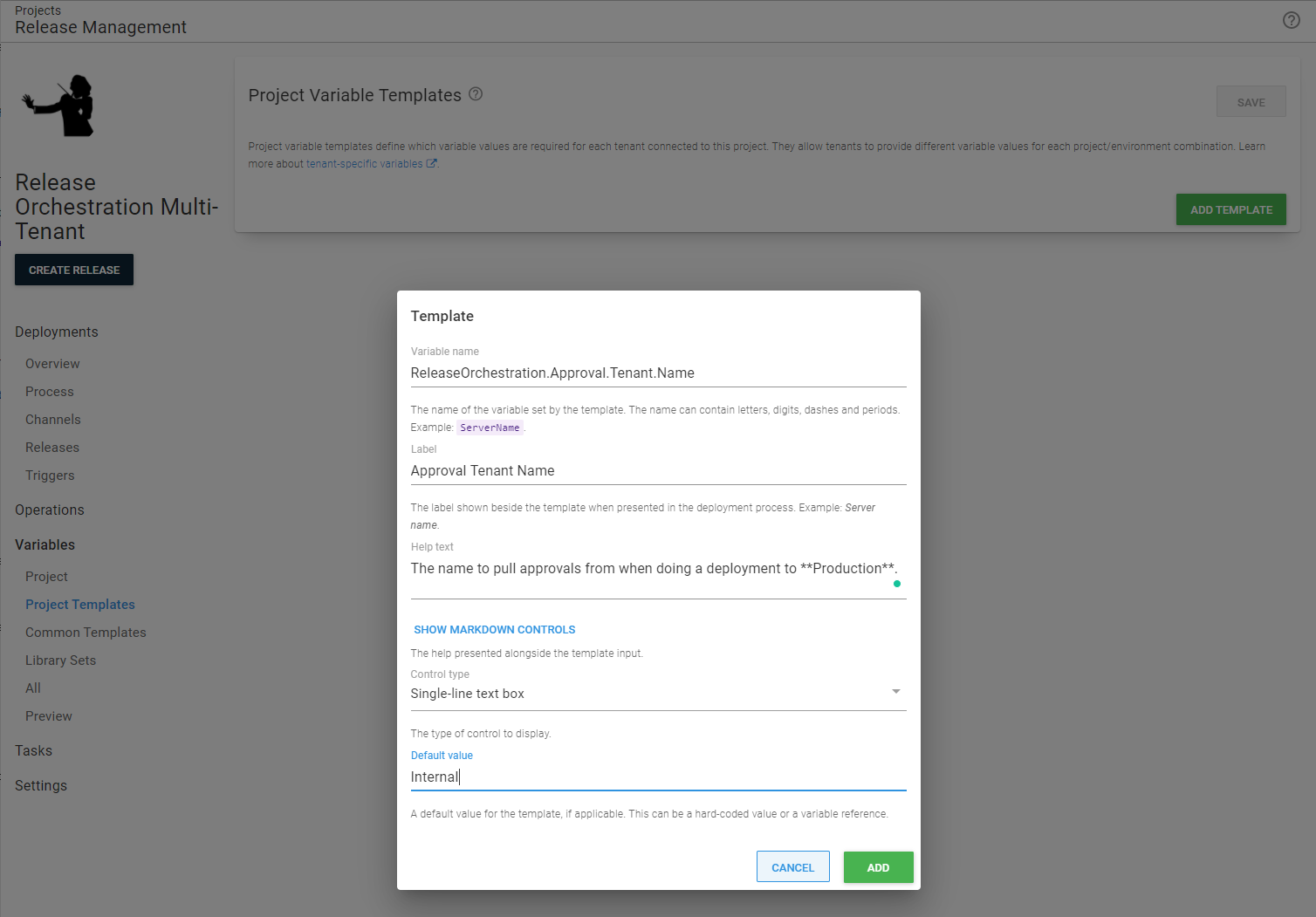 Go to Internal, All Pets, and Pet World and assign the Prod Approval environment for the Release Orchestration Project. 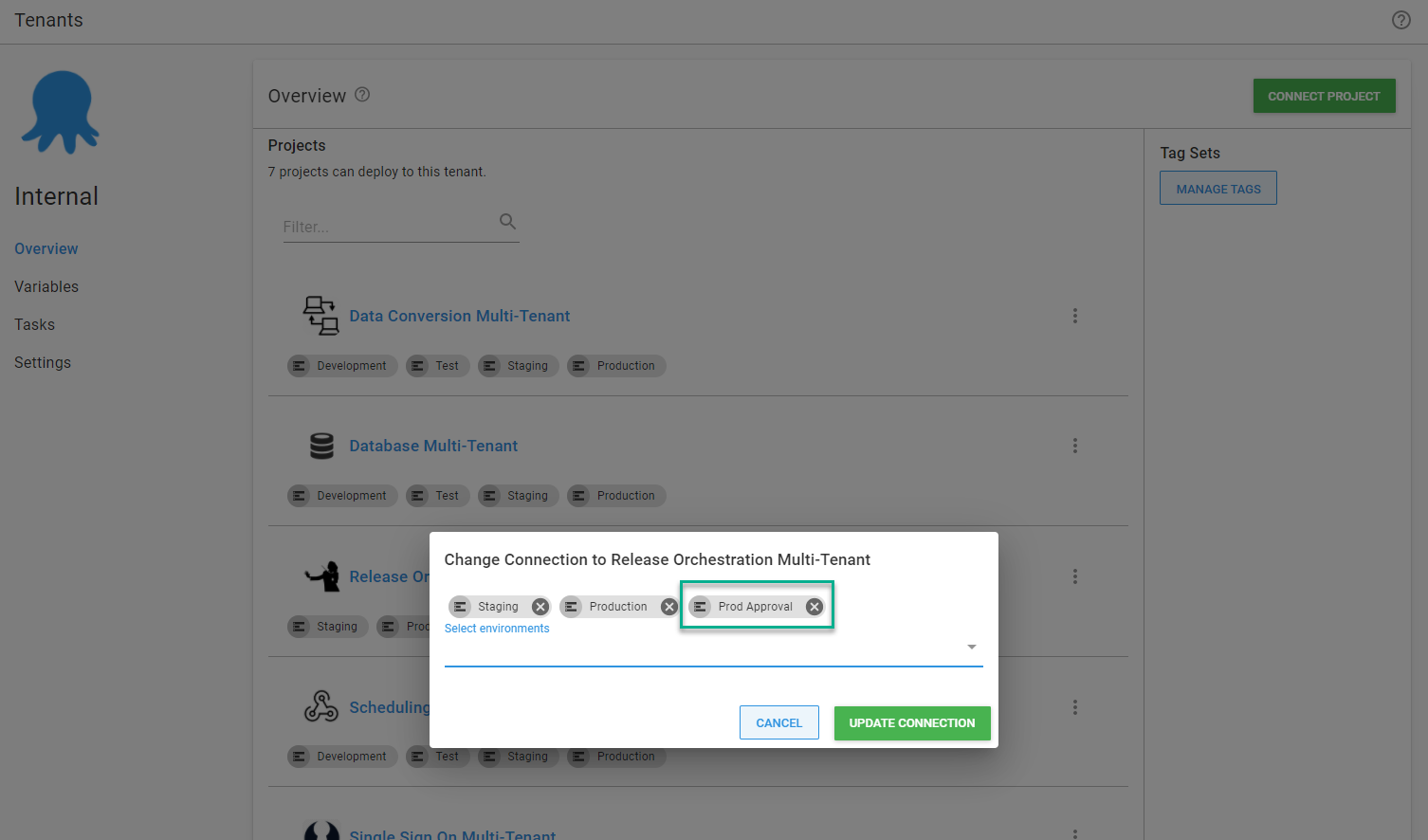 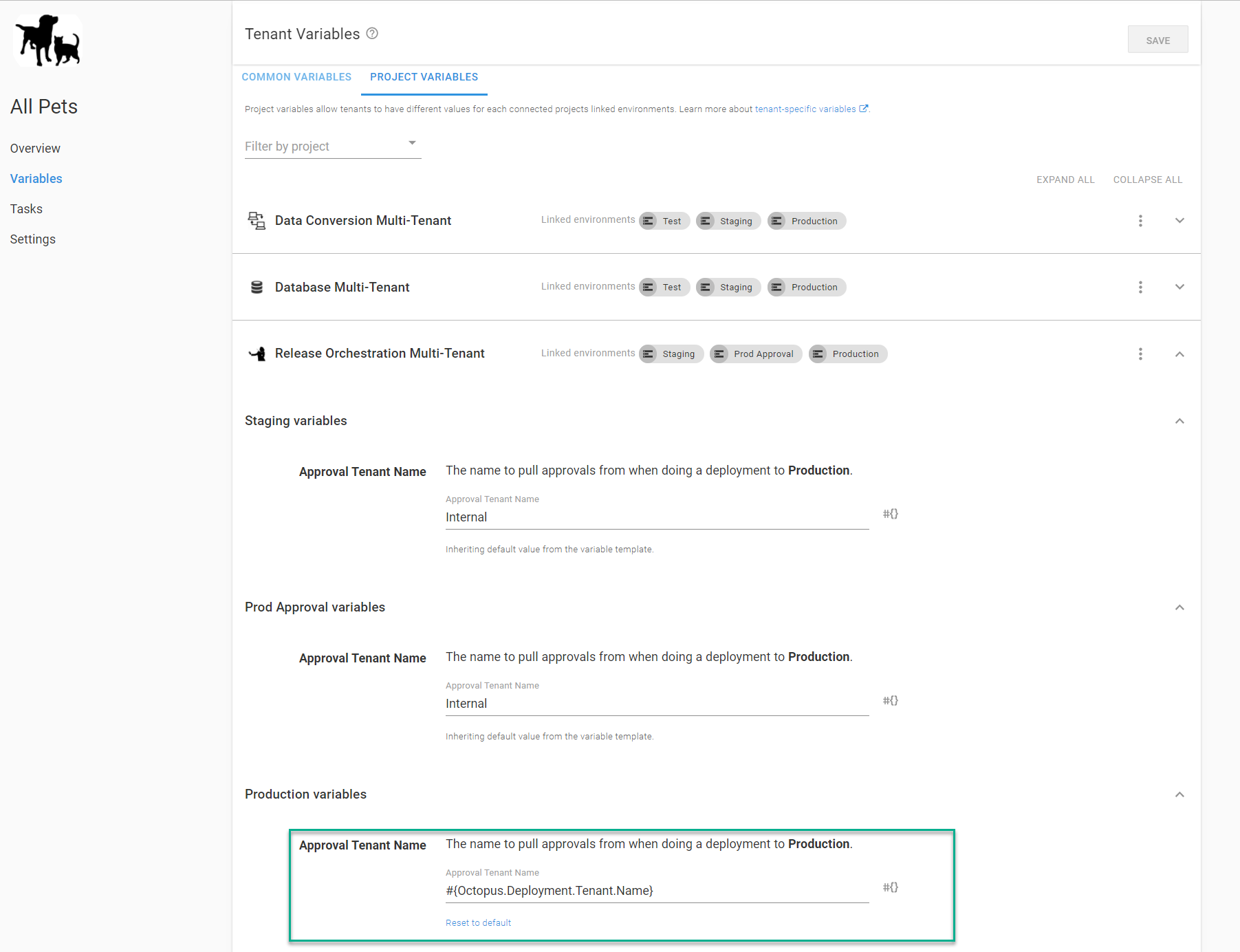 For each of the "non-whatif" steps, set the approval tenant to the variable created earlier.

The approval screen will show Pet Life and Dogs Only don't run on the Prod Approval environment. All the other tenants do.

Let's see this all in action. First, let's deploy the Internal through Staging and onto Prod Approval. Only the what if steps and approval steps will run in the Prod Approval environment. 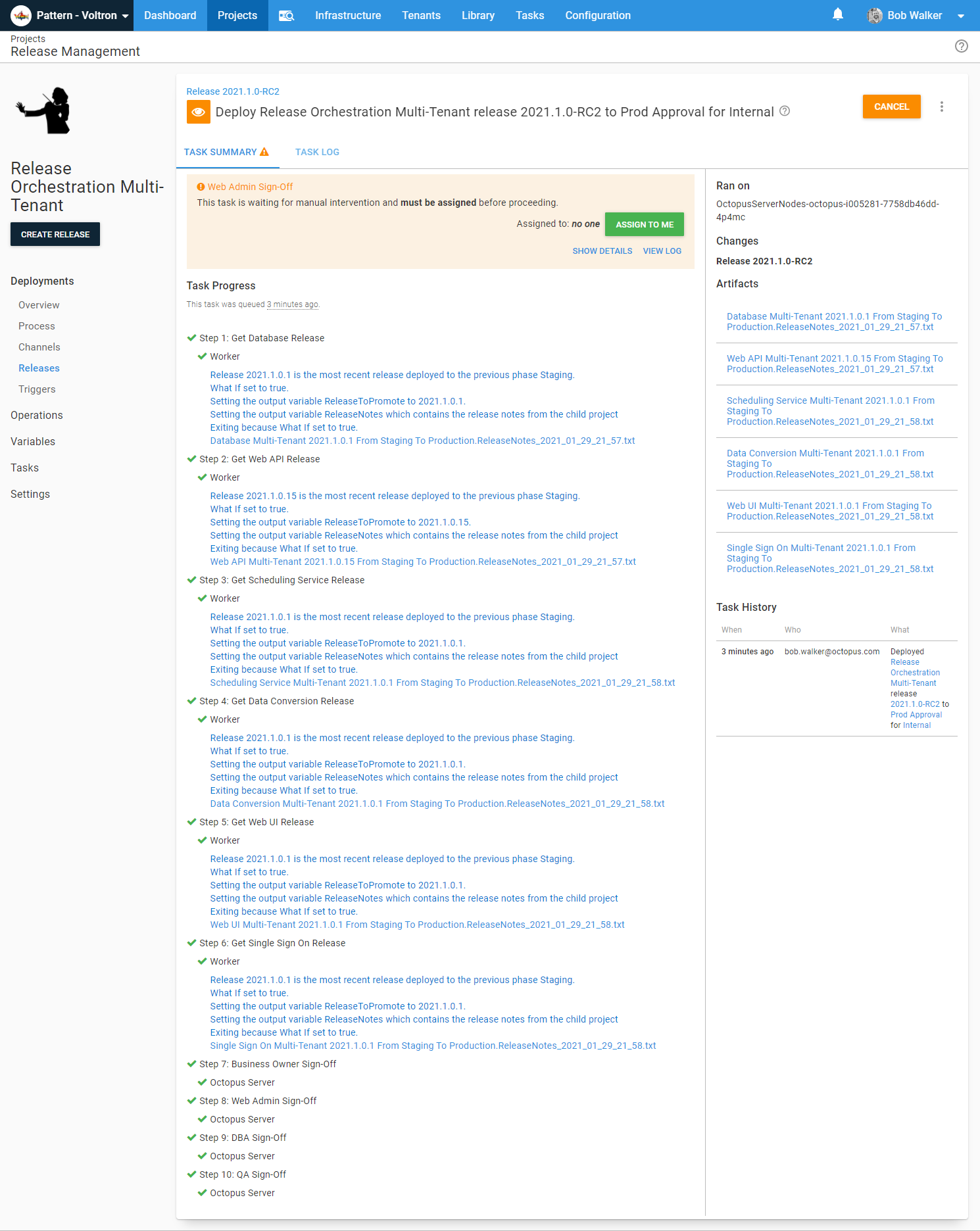 Now promote that release to Production for Internal. The approvals are picked up from the Prod Approval environment for the Internal tenant.

After Internal has been promoted through Prod Approval, we can move onto Pet Life and Dogs Only. Promoting the release through Staging and onto Production shows the Internal tenant's approval. 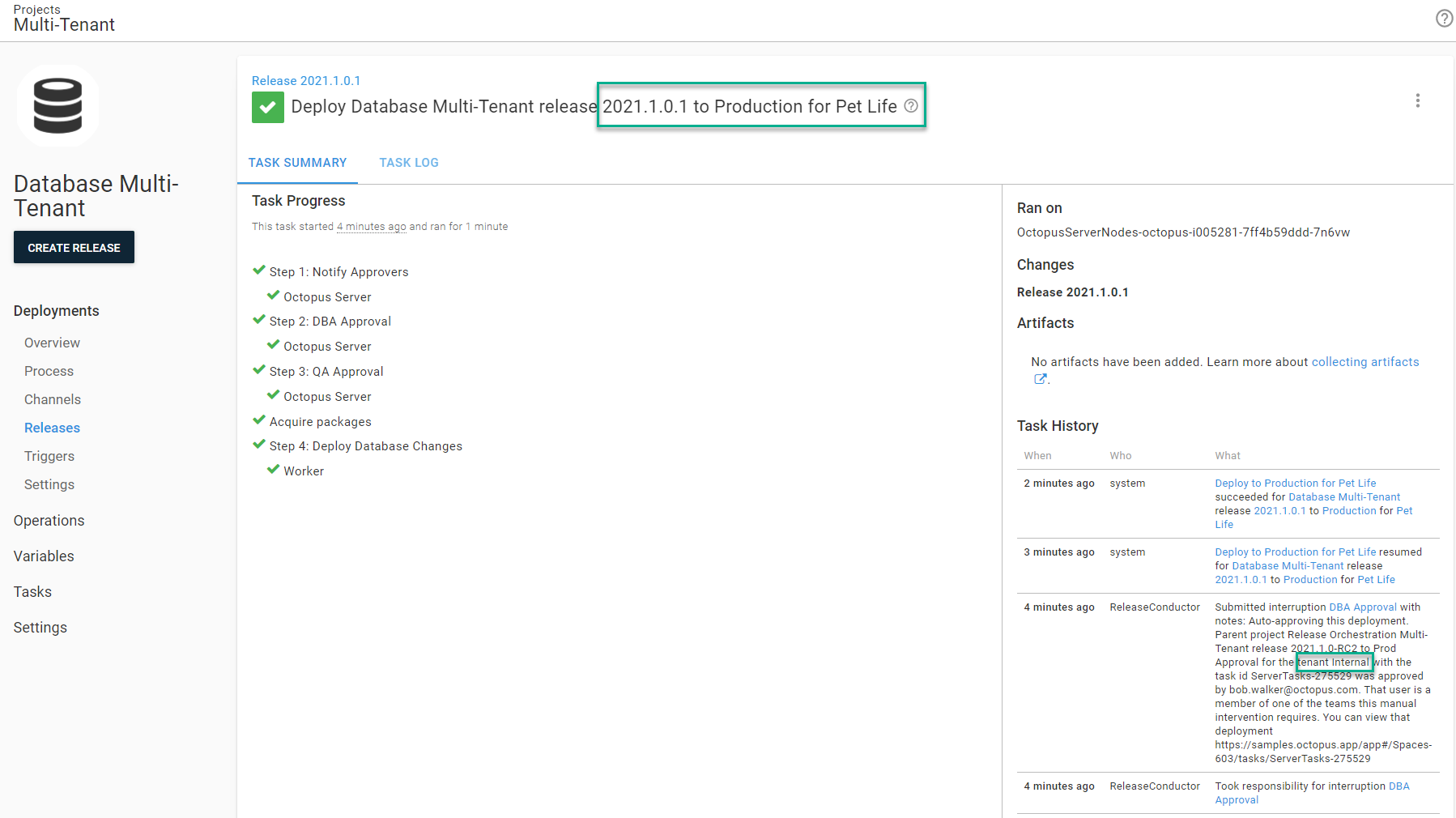 When the same release is deployed to Production for All Pets, we see the approvals come from the All Pets tenant. 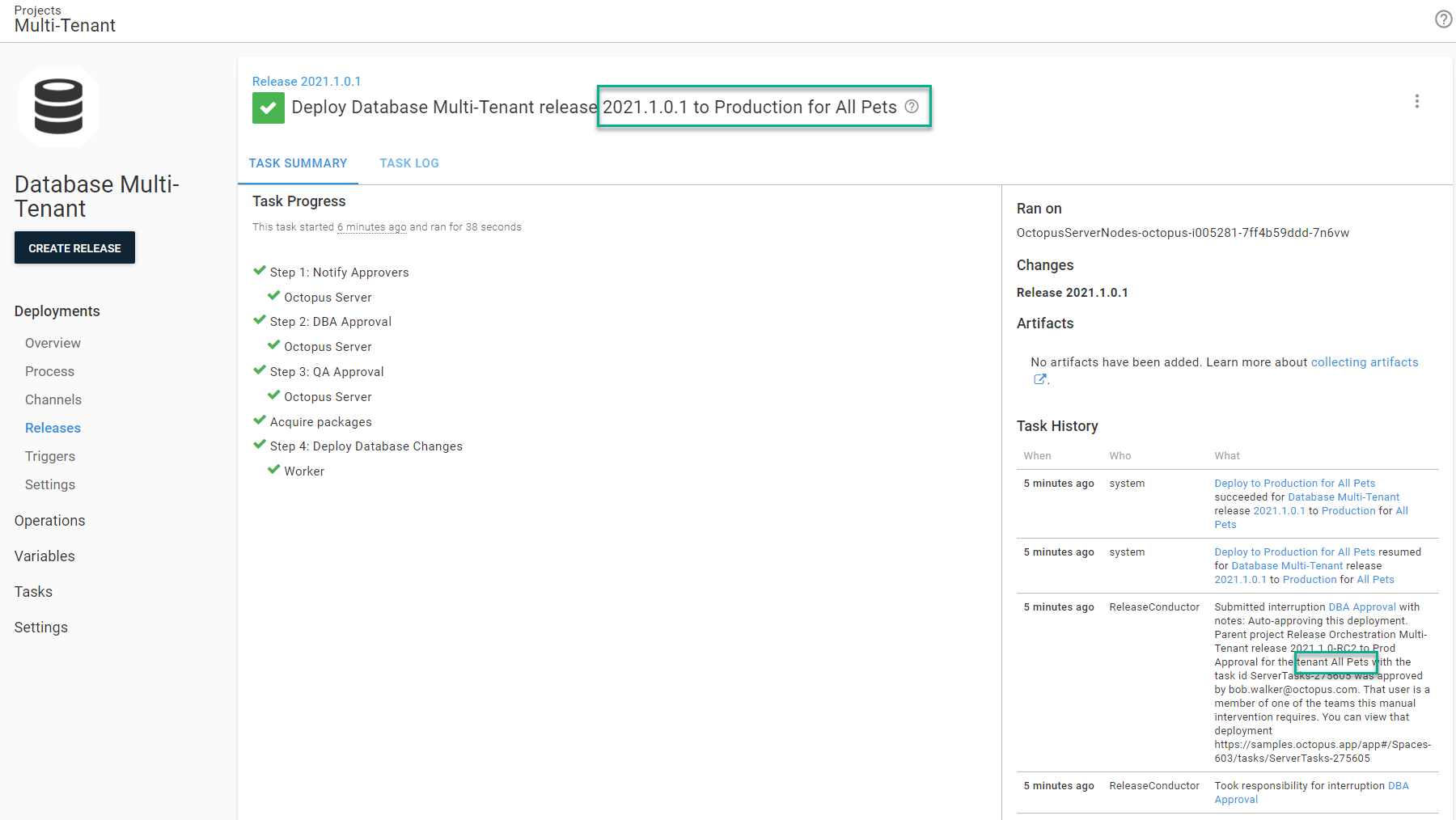 The step template looks for approvals for the current release only. Creating a new release will require another round of approvals, even for a patch release, such as 2021.1.1.

This post covered some of the multi-tenancy scenarios for the Deploy Child Octopus Deploy Project step template. You can see more scenarios in my previous post.

Octopus Deploy's multi-tenancy feature was designed to help companies who install software on distinct infrastructure. I see and hear the various quirks customers run into with that model and they were my motivation for writing this step template. I want to help customers avoid errors in manual processes and remove as much psychological weight as possible from multi-tenant deployments.

I hope you find this step template useful for your multi-tenancy projects.

The final guide in this three-part series is: