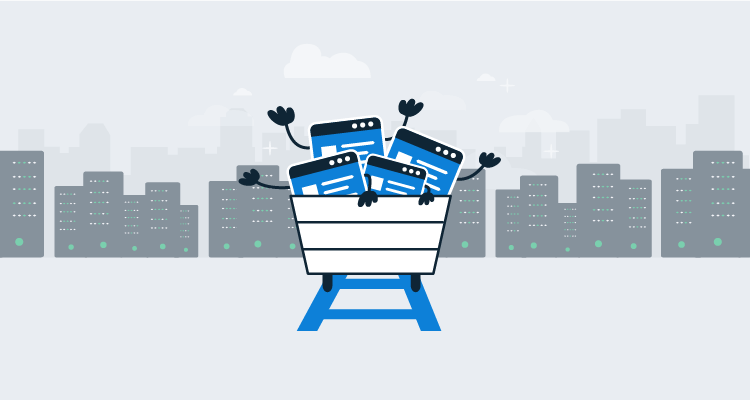 In this post, I talk about release management with dynamic infrastructure and demonstrate how to use the Deploy Child Octopus Deploy Project step template.

This is the third post in a series about release management. The previous posts are:

After reading my first post, a customer asked how to use my step to redeploy a suite of application components, not promote from one environment to another. I hadn't considered that as a use case when writing the step template, but I should have.

The customer was rebuilding their test servers periodically, and after some discussion, we landed on these requirements:

Not all applications are hosted on a single deployment target. Consider this example for staging:

One objective with the Deploy Child Octopus Deploy Project step template is that it will just work. I want to remove as much psychological weight as possible when promoting/deploying an application suite.

That objective applies to this scenario. When the parent/release orchestration project is given a specific set of machines to deploy, it will compare that list with the machines the child project can deploy to. Using the same scenario:

The step template has been updated to support two deployment modes:

Although I didn't want to add another parameter, I couldn't find another solution. There are too many edge cases. It made more sense to let you choose the mode.

This functionality is also multi-tenant aware; if you're redeploying a multi-tenant project, it finds the most recent successful release for that tenant in the destination environment.

I recommend setting this to a prompted variable with the default set to Promote. This lets you change the behavior of the parent/release orchestration project on the fly.

For this post, I will convert the project I created in the first post of this series. When complete, the project will:

When we finished the first post, we had a release orchestration project that deployed to Staging, Prod Approval, and Production.

The deployment process will: 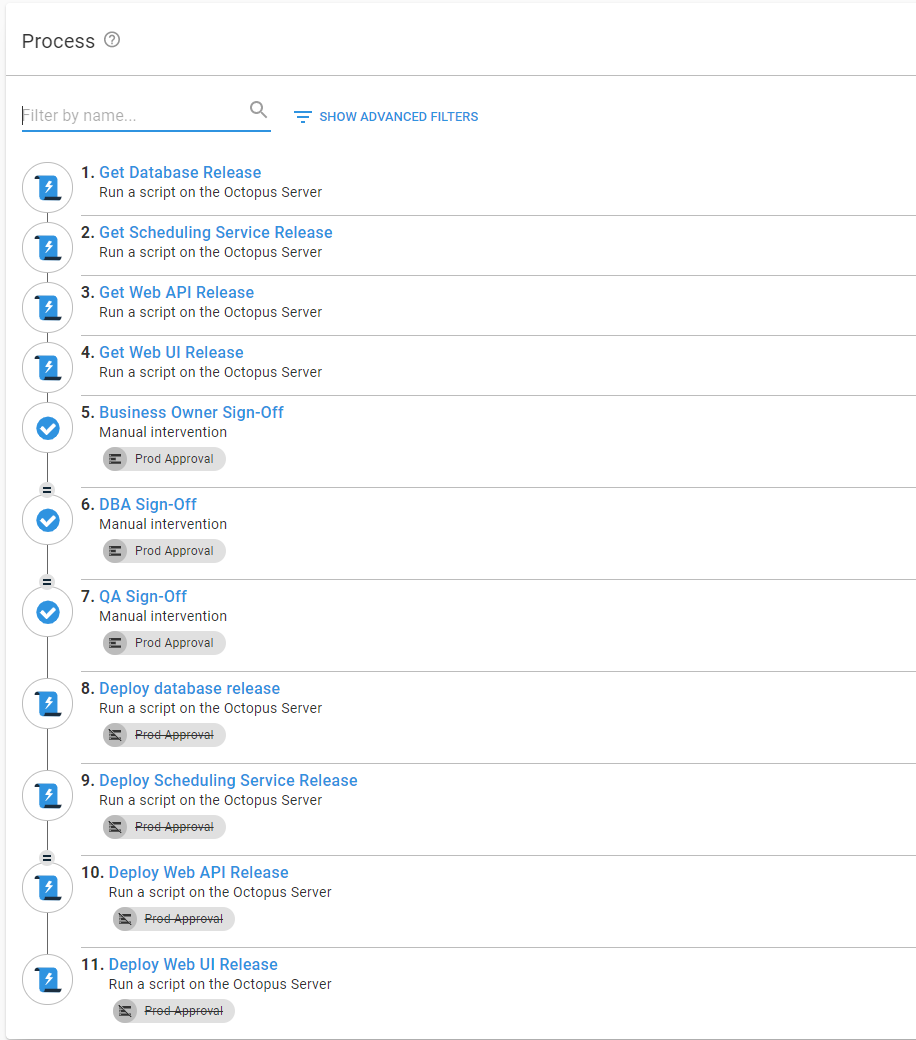 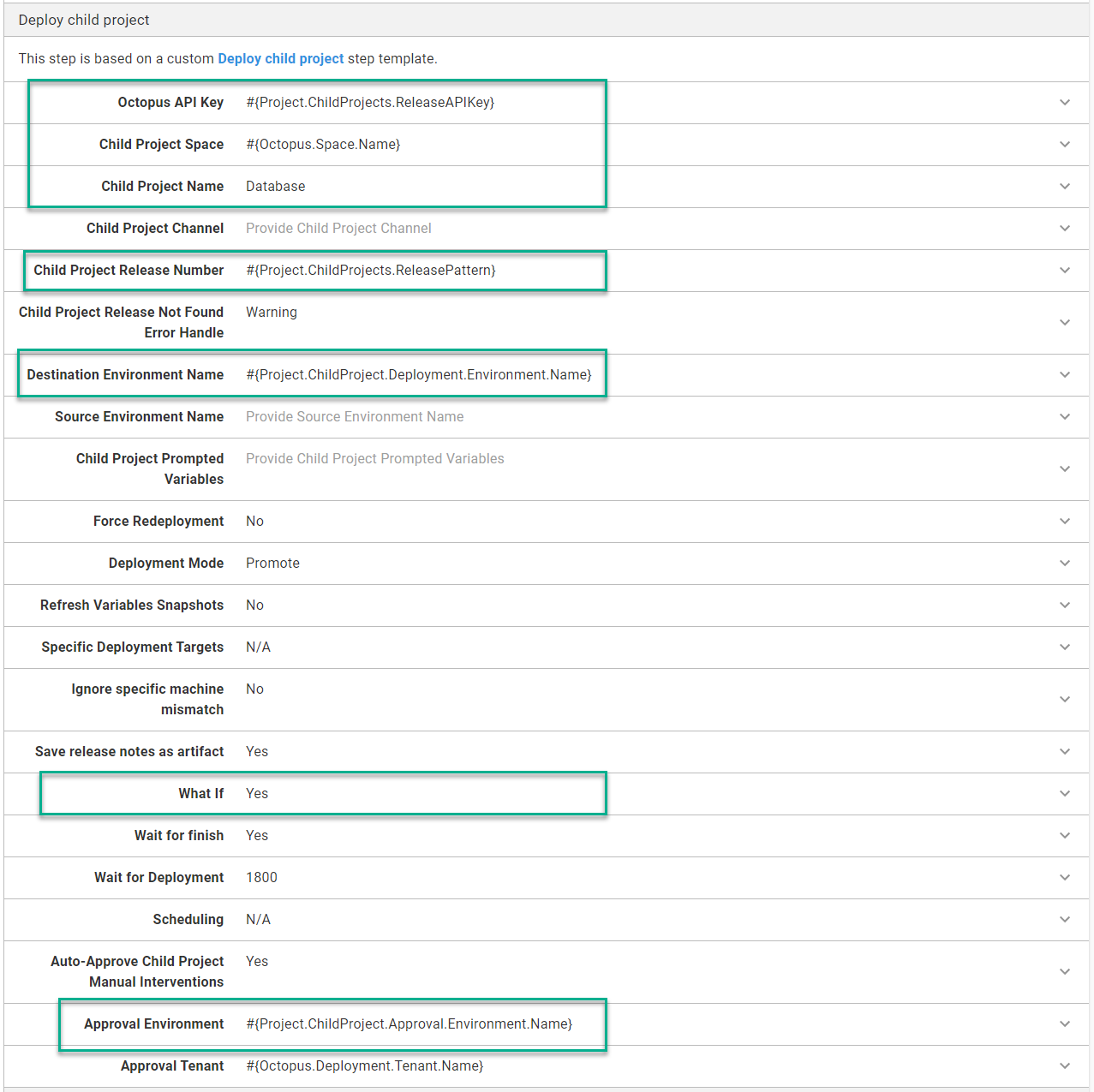 The only difference between each step is:

As you can see, this process makes heavy use of variables. Those variable definitions are:

A release usually promotes from Test to Staging, or Staging to Production. In some scenarios though, it also makes sense to redeploy what is in Staging or in Production.

I am going to update my variables so that the process: 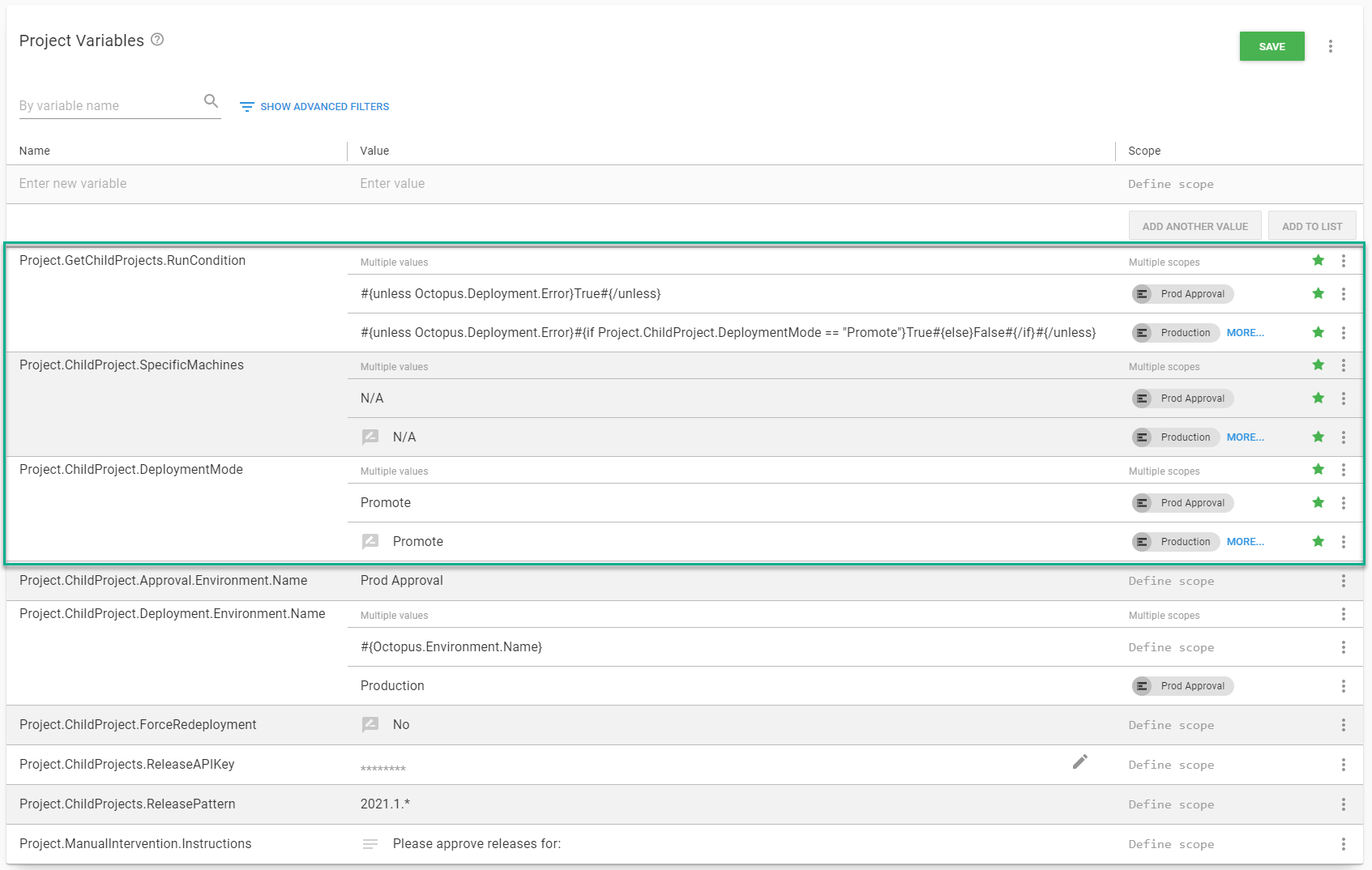 In all the Get [component] release steps, I update the deployment mode, specific machines, and run conditions to use the new variables created. 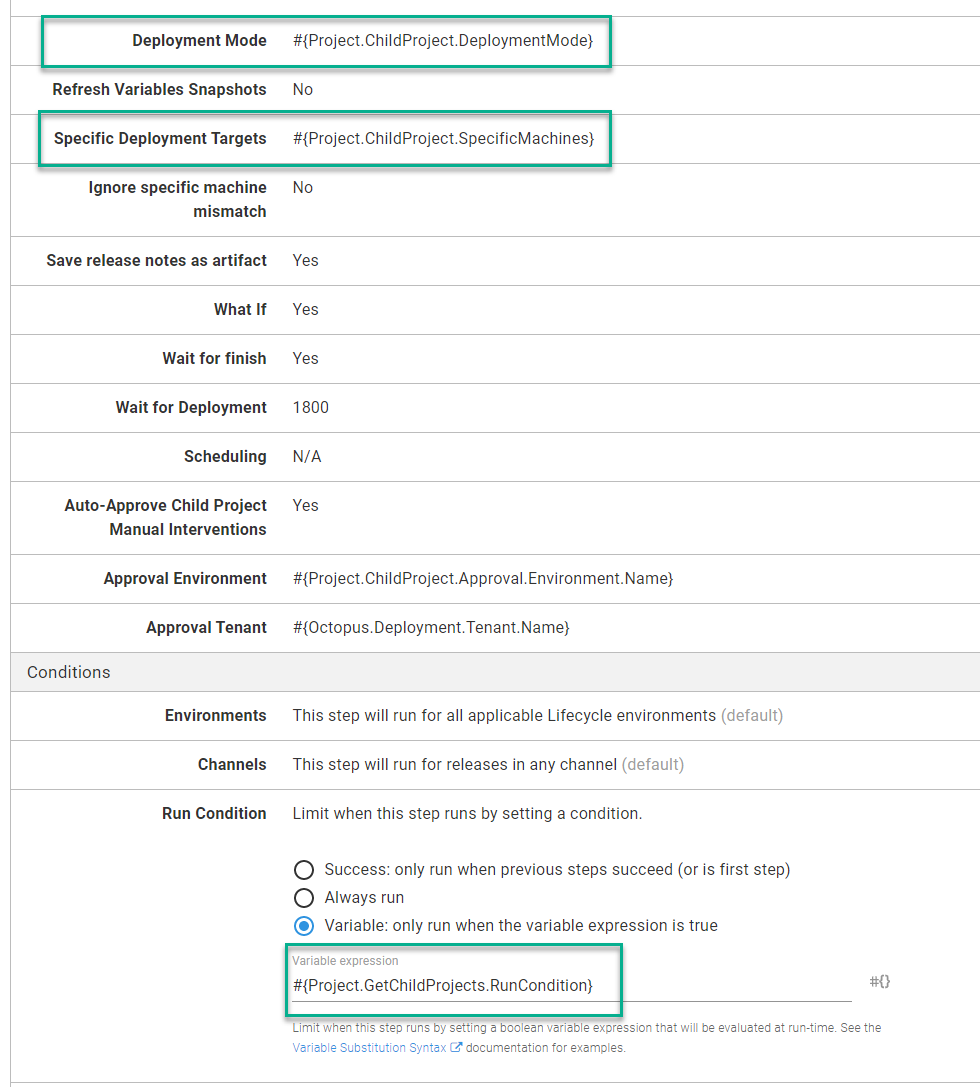 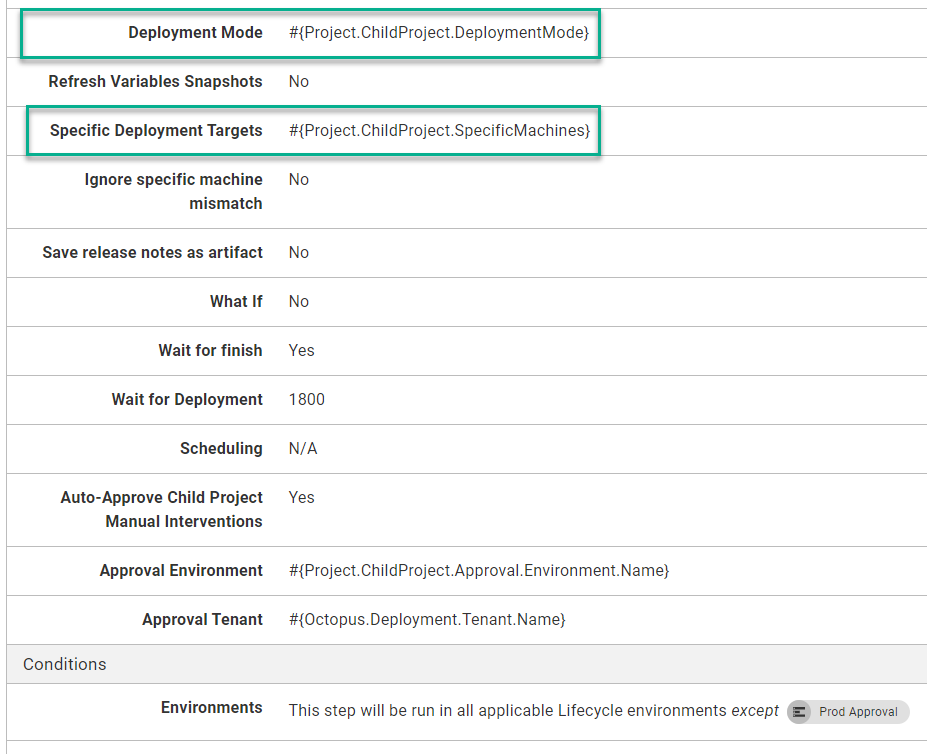 Creating a release to Staging, Prod Approval, and Production is the same as before.

Most of the time, users will leave the prompted variables as they are and run a promotion. 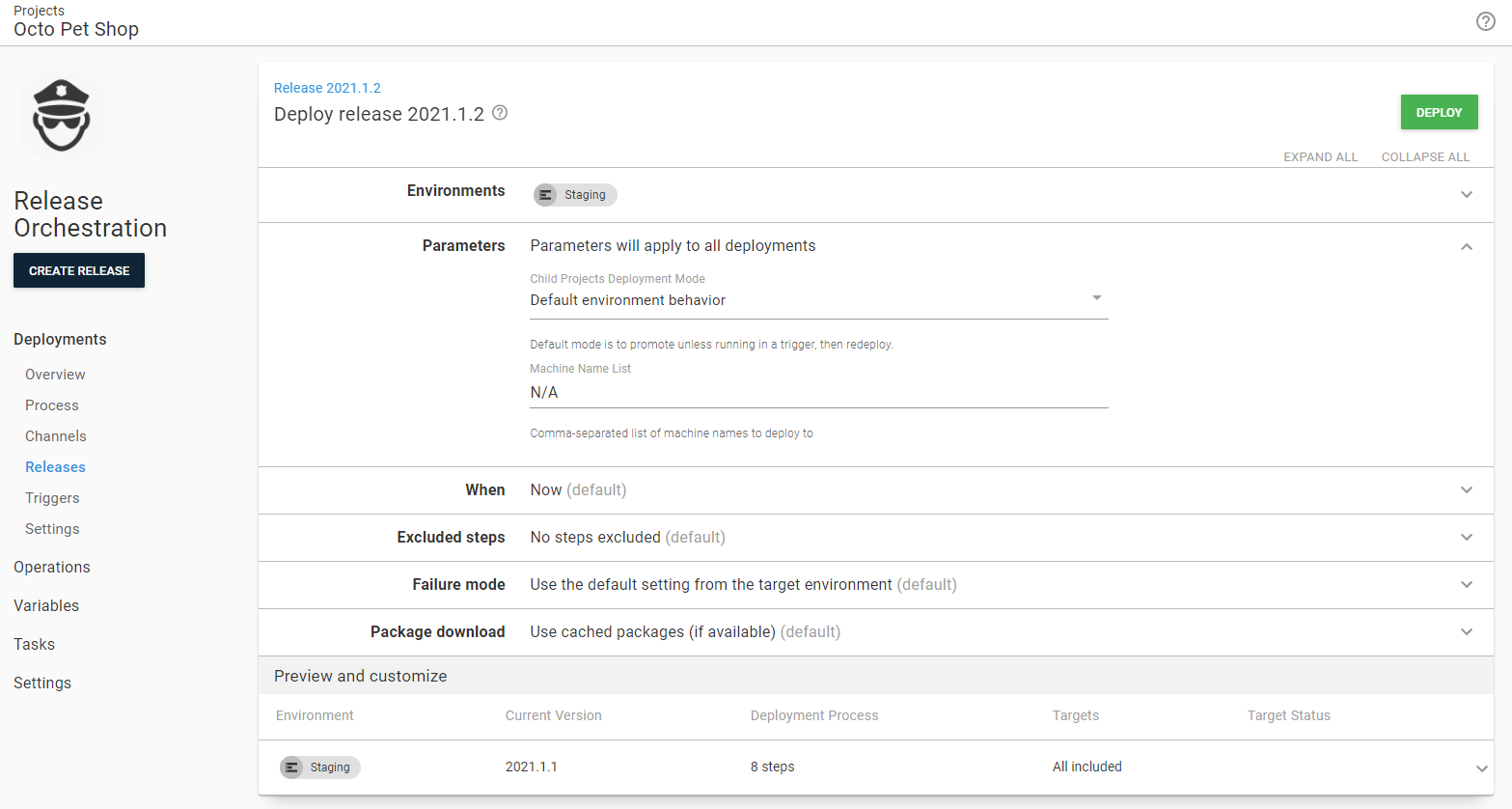 That will continue to function as it always has. 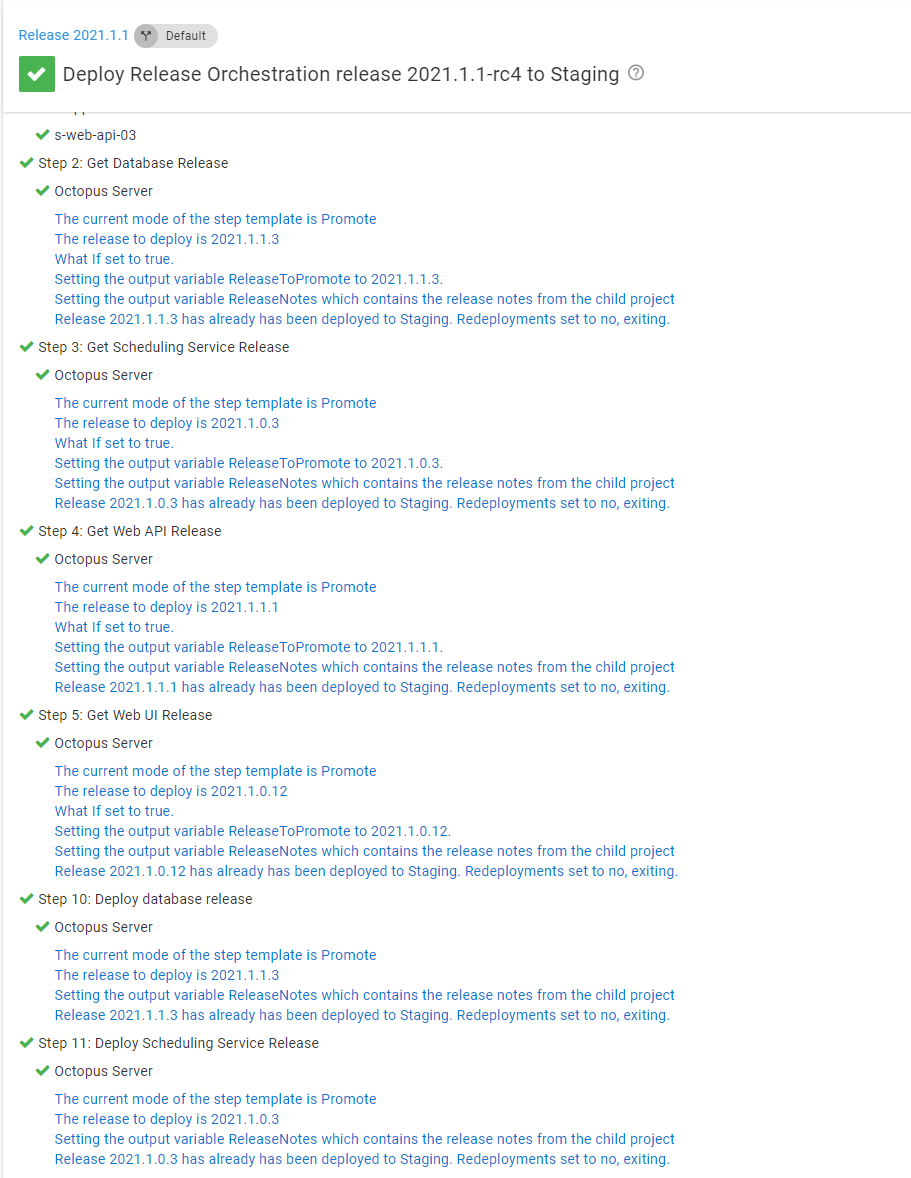 You can also opt to do a redeployment by changing the prompted variable to redeploy. 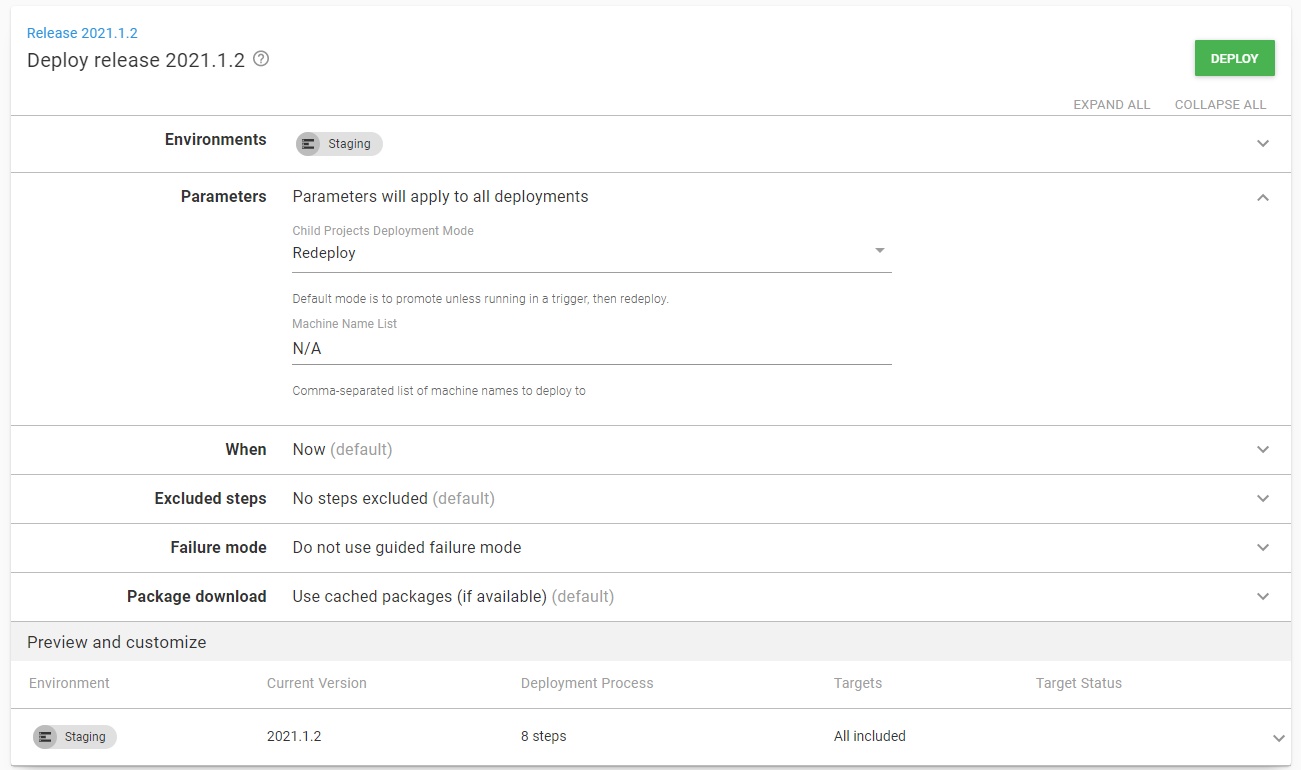 That triggers a redeployment of releases in Staging or Production. 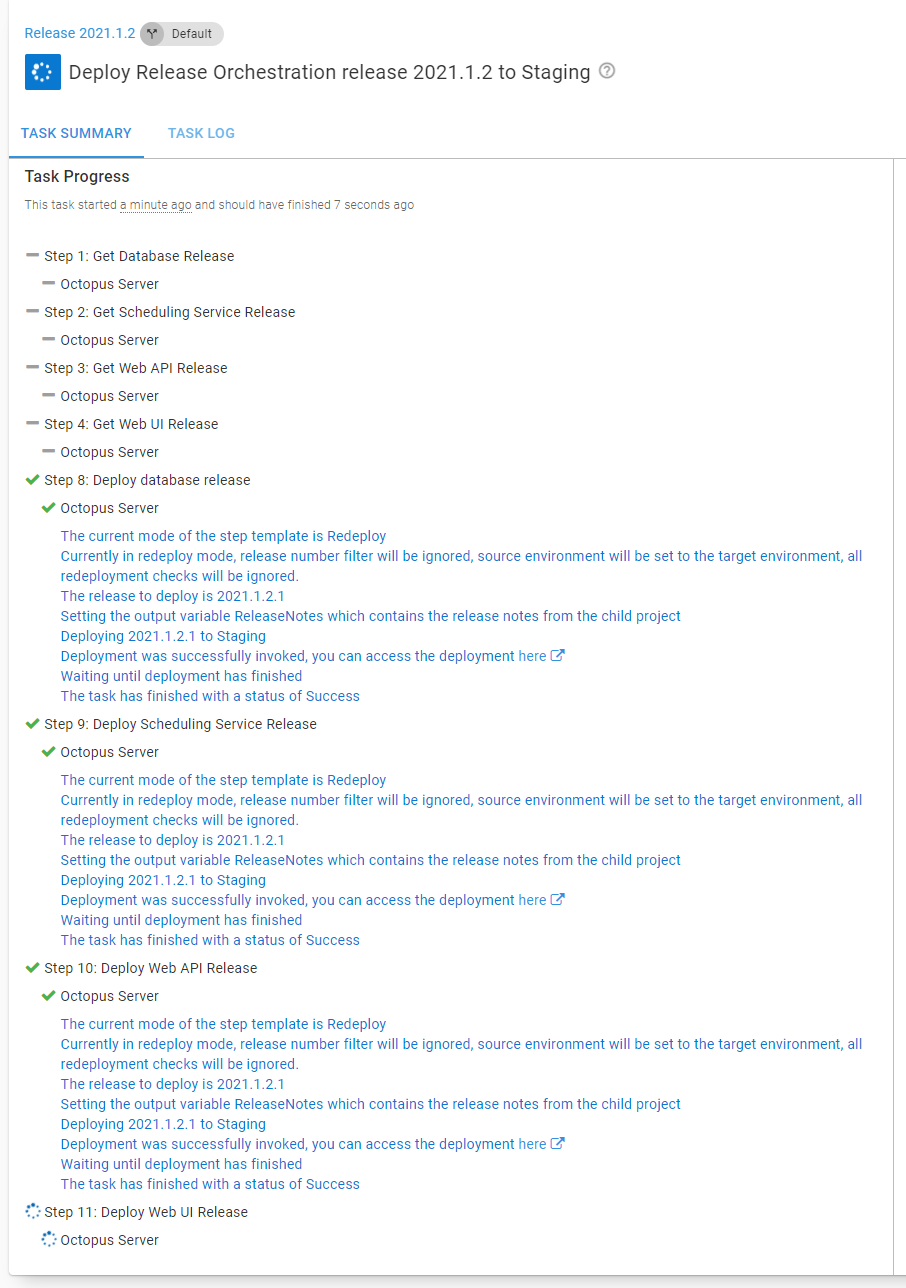 If that release has already been deployed to a specific environment, you can click the overflow menu (three vertical ellipsis points) in the top-right menu and select Re-deploy....

Redeploying to a specific machine

You can also opt to redeploy to a specific machine. 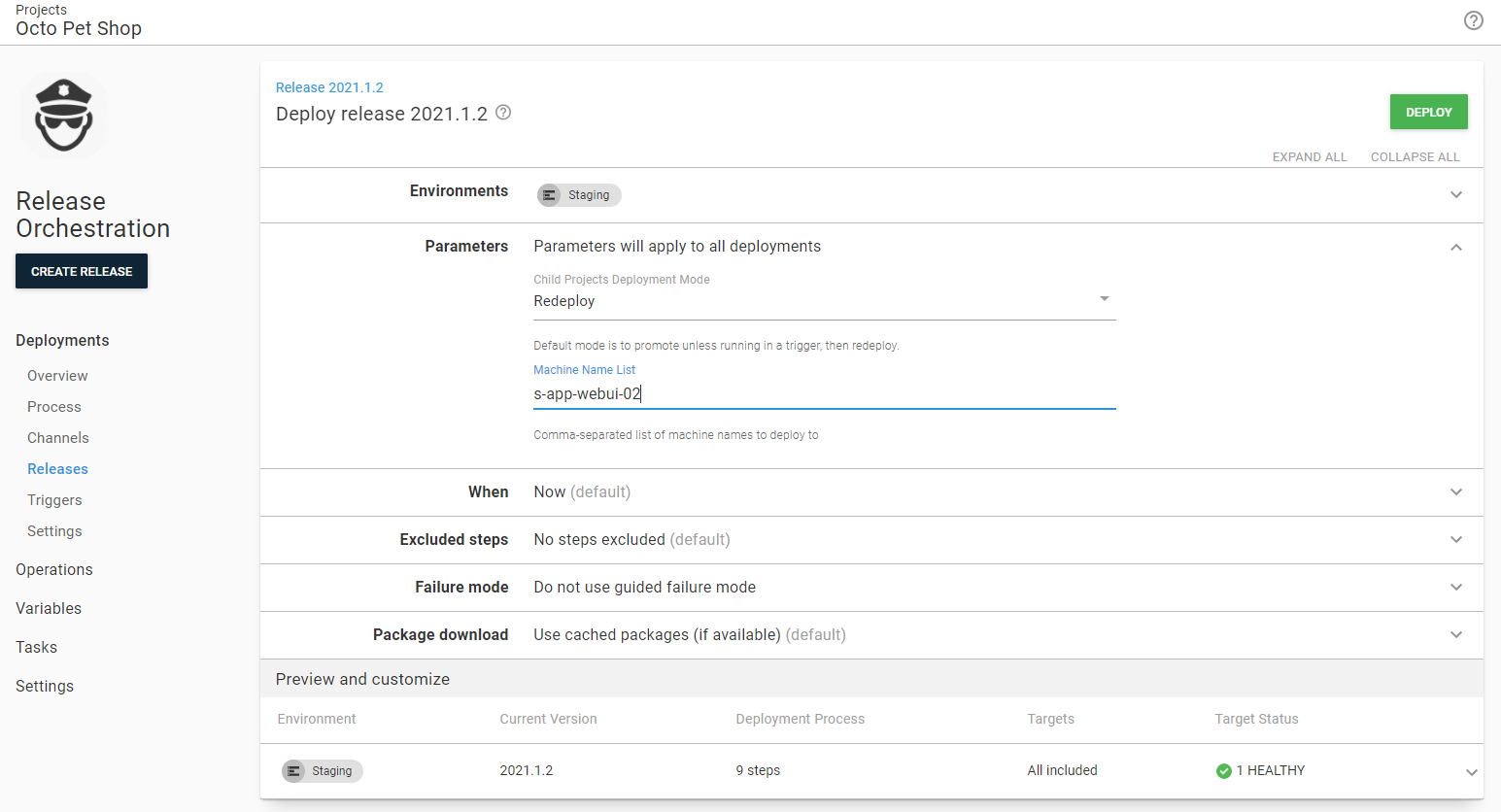 When the deployment runs, the step template will skip any projects not associated with the selected machine. 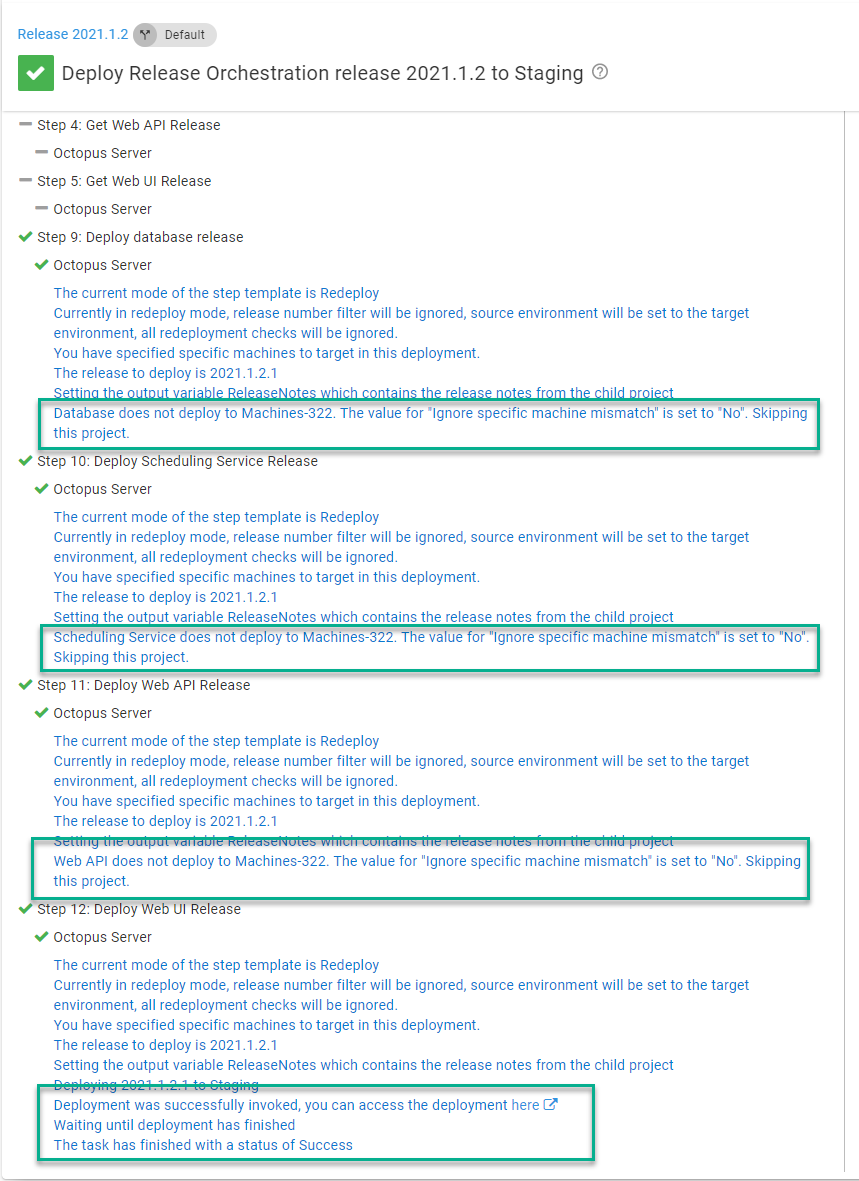 Scenario #2: Automatic redeployments when scaling out

When a new deployment target is created, you can automatically deploy everything associated with that target. To do this, we need to make a minor modification to the variables and deployment process.

In my scenario, I want to support both manual and automatic redeployments. Supporting both modes still requires a prompted variable, however the default value will change to: 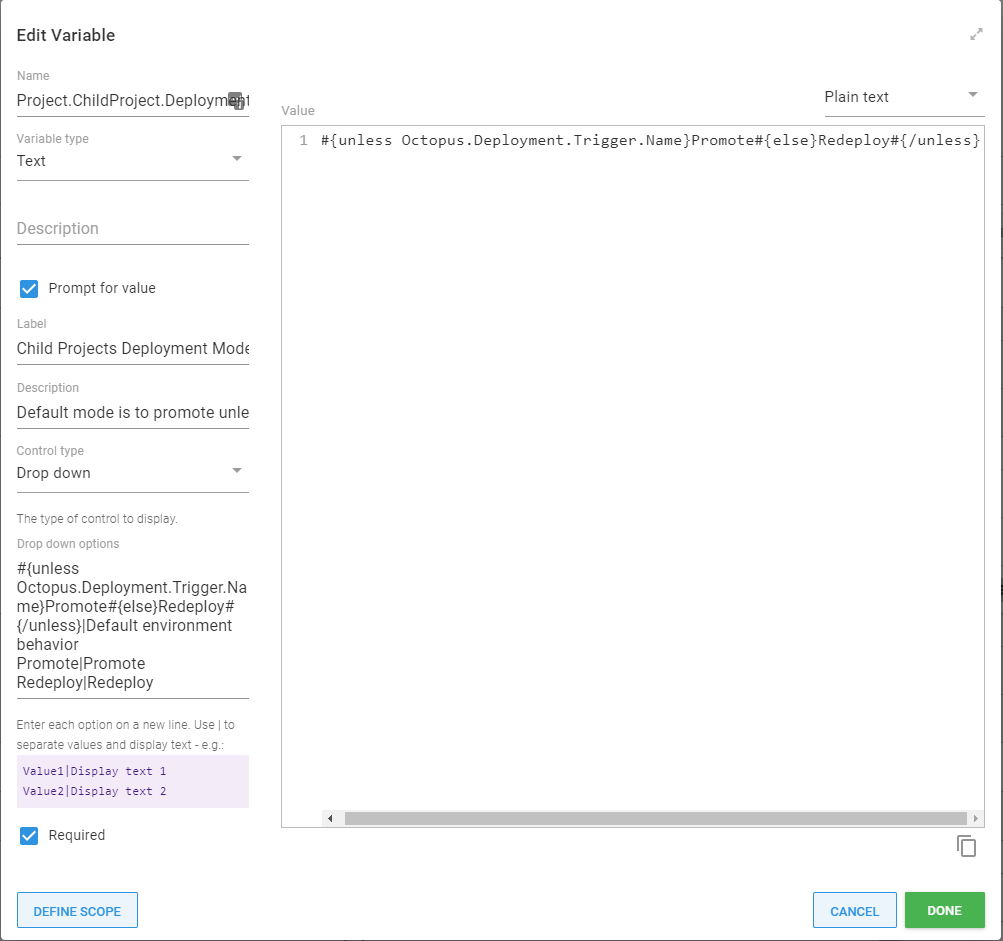 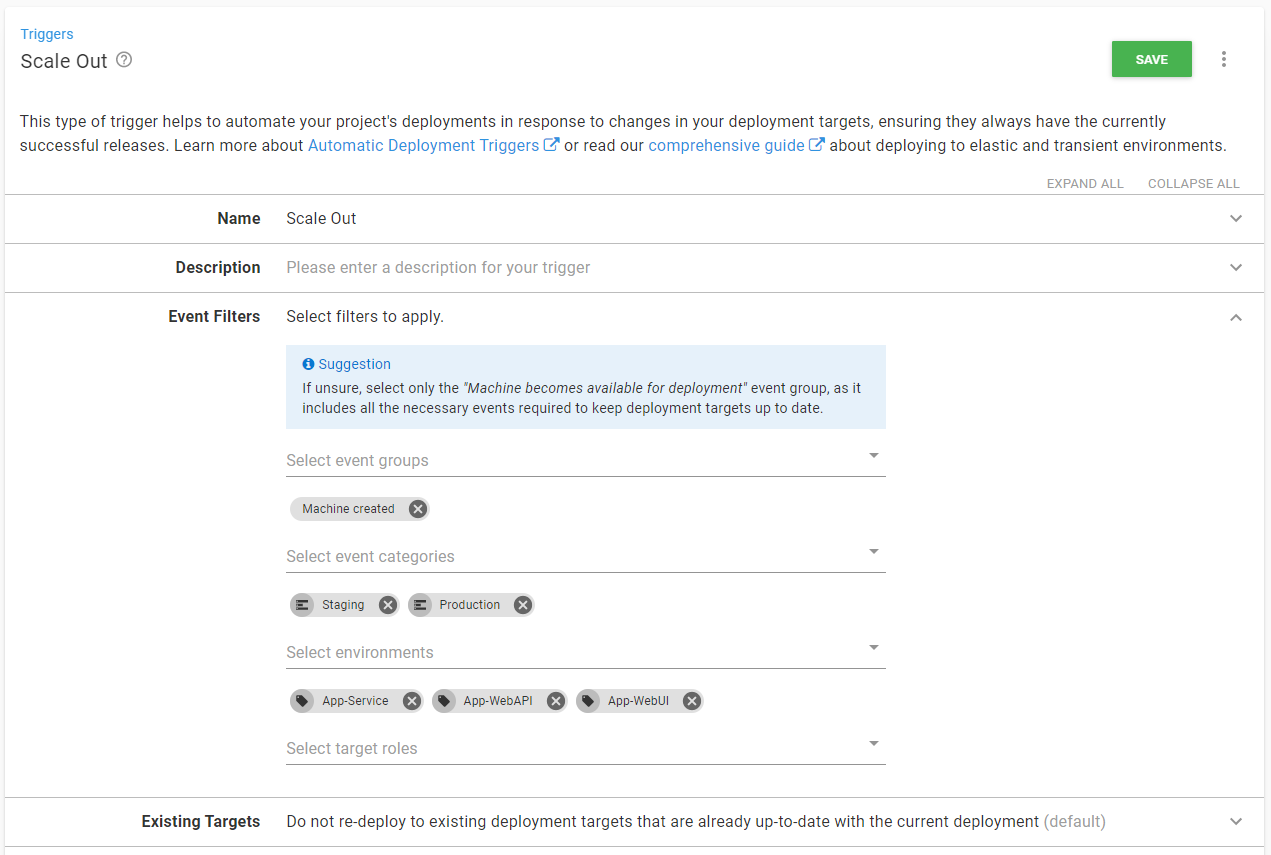 There is one problem with the trigger and the existing deployment process, which I'll explain. I also demonstrate how to avoid the problem.

First, I add a new target for one of those roles in Staging. 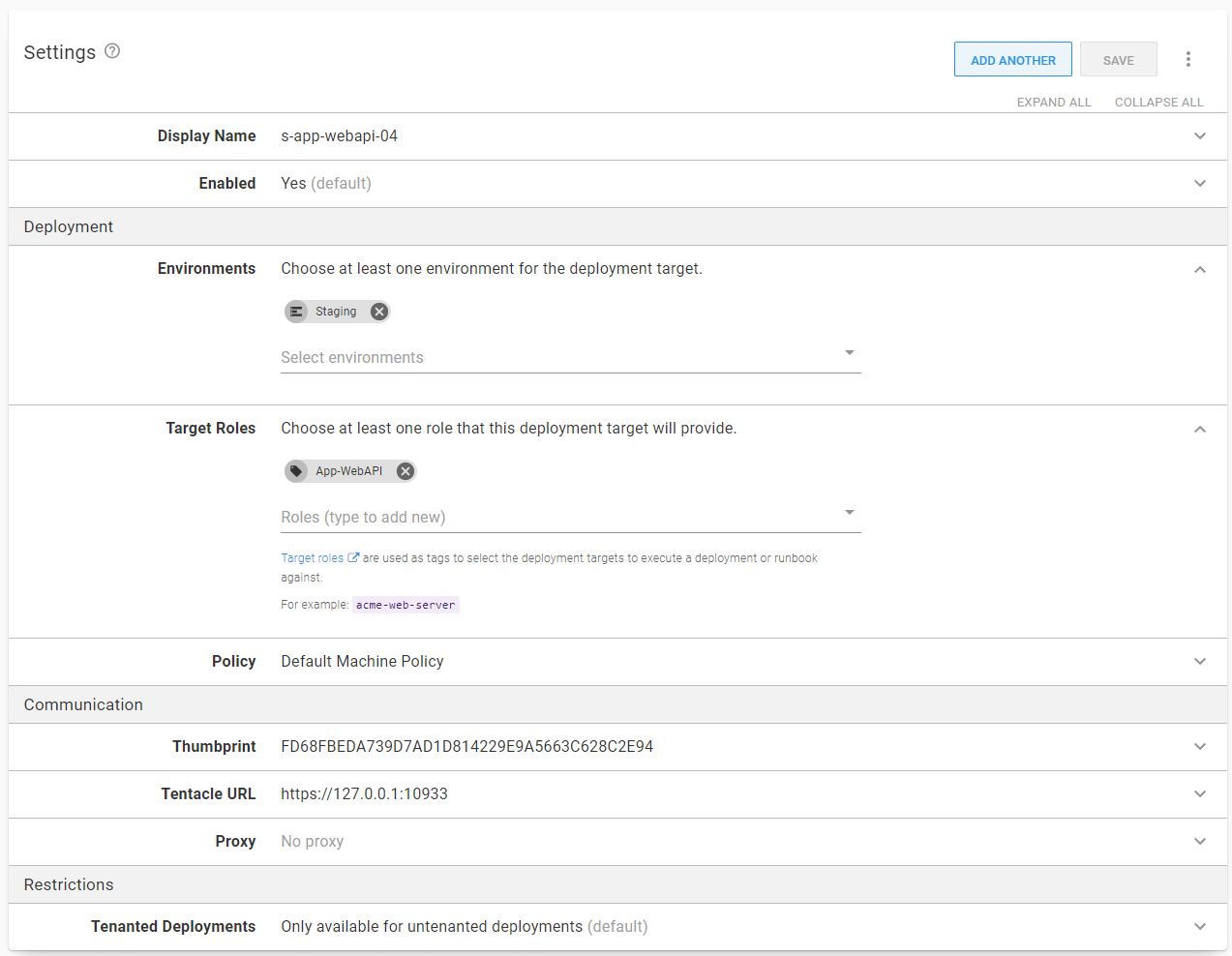 The trigger will never fire because the release orchestration project doesn't have any steps that specifically target those roles. You can see it on the deployment screen. There are no targets. 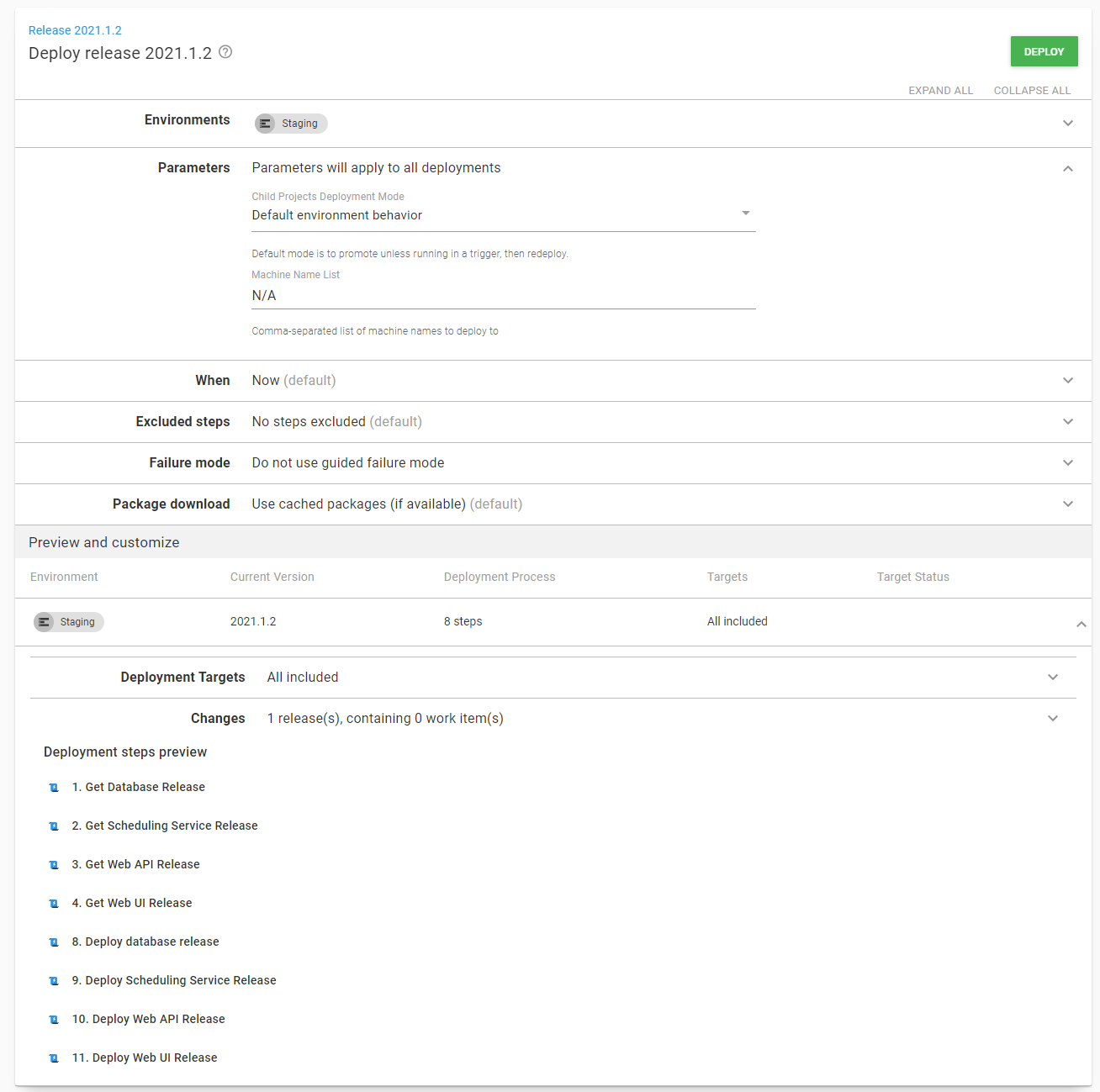 The solution is adding a simple script step that targets all those roles. 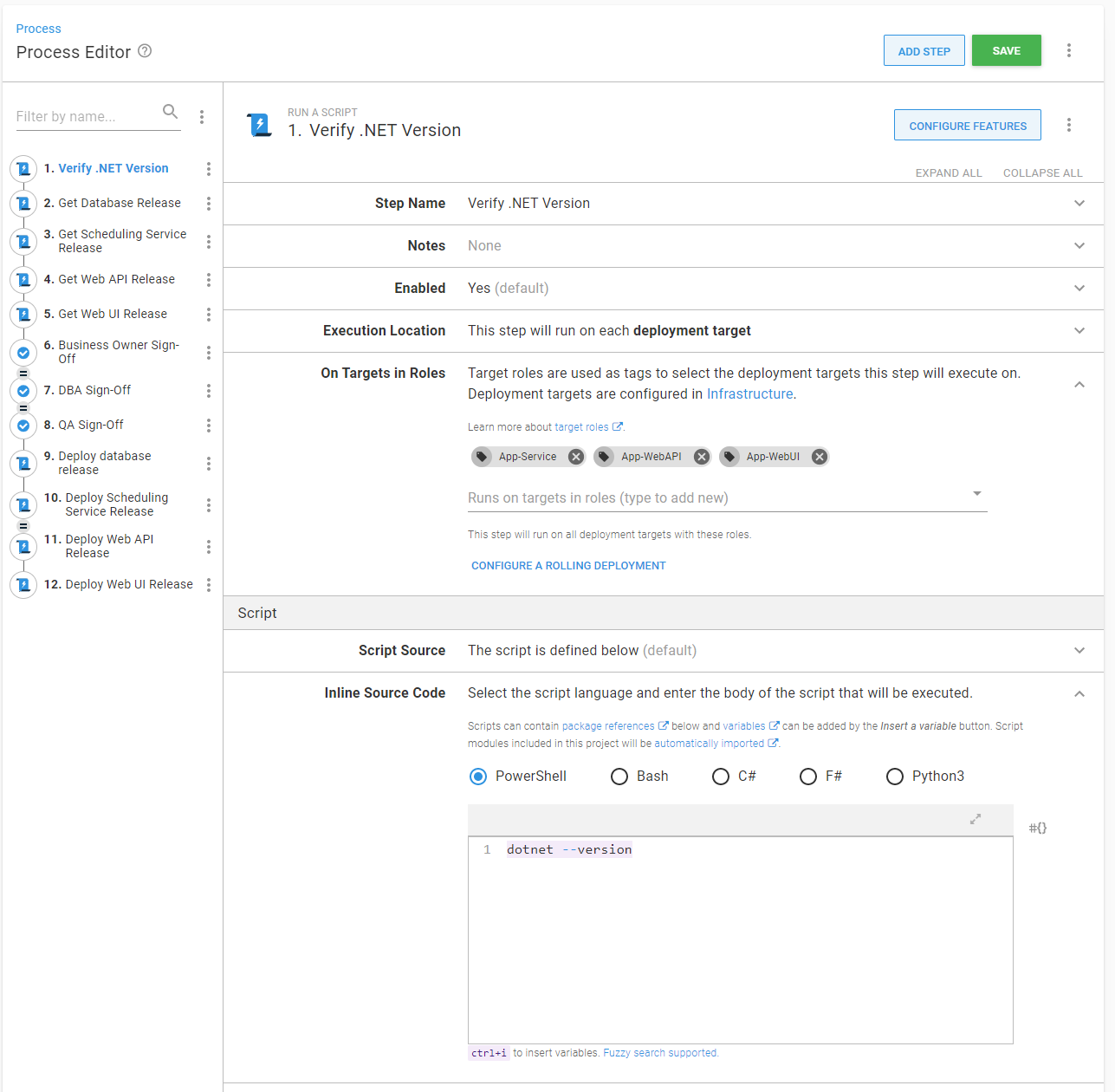 Now when we're ready to deploy a release, we can see all the deployment targets the script will run on. 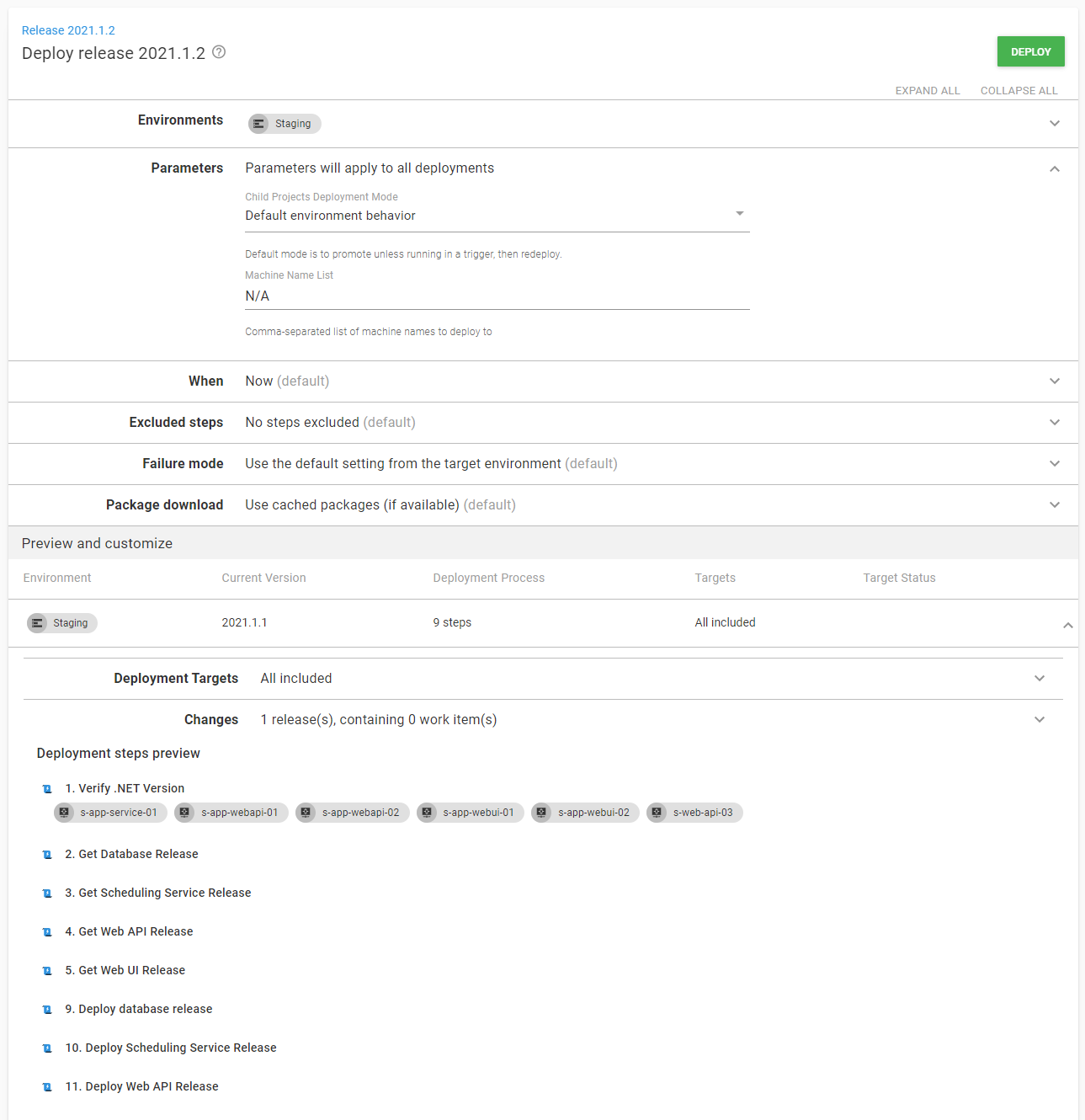 When I add a new machine to staging, the trigger will fire. It will skip over projects the new machine won't deploy to, like when we manually selected a deployment target. 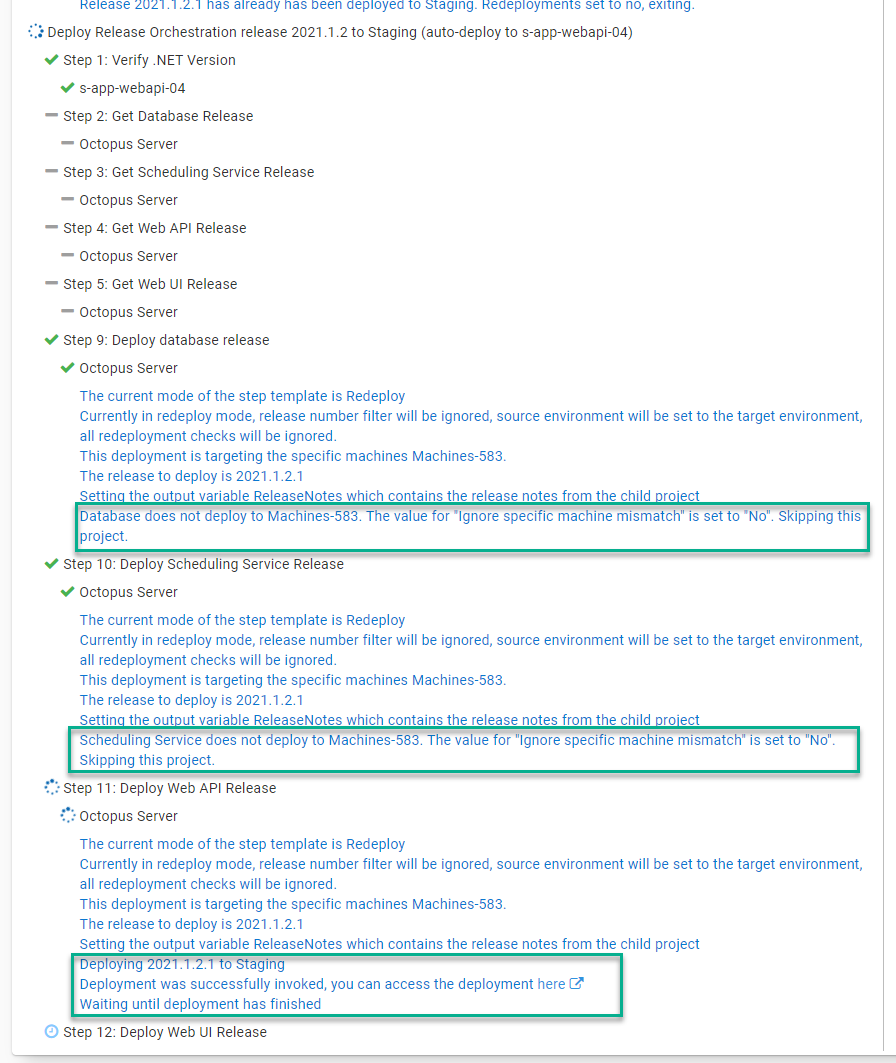 It will also only send in that specific machine to the component project. 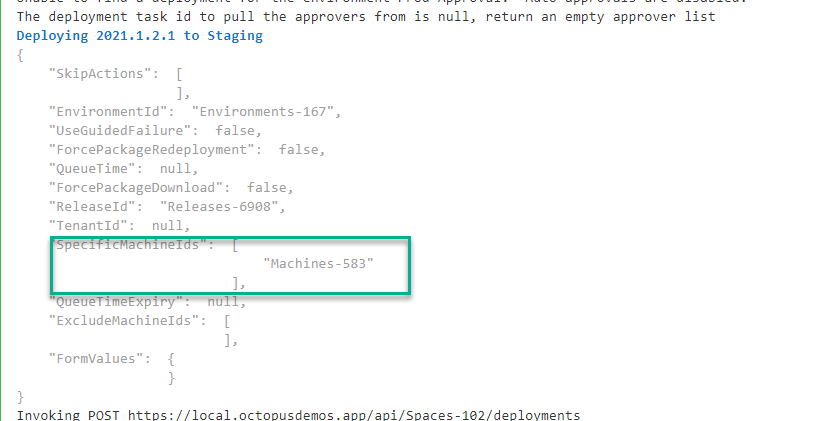 The final scenario is when external tools, such as a build server, trigger the deployments to all the component projects.

In this example, the build server automatically triggers deployments to Development and Test. While this works for code changes, it has limitations when a new server comes online:

We don't want to change the build server integration. Instead, we update the existing process to allow for redeployment only releases for Development and Test.

The current lifecycle in the project only allows deployments to Staging, Prod Approval, and Production. In this scenario, I want to keep that lifecycle and create a new lifecycle.

The release orchestration project will be used to promote from Test to Staging and Staging to Production the majority of the time. The redeployments to Development and Test are the exception, rather than the norm.

You might find it easier to add Development and Test to your lifecycle and mark them as optional.

Now create that new lifecycle and configure it to deploy to Development and Test: 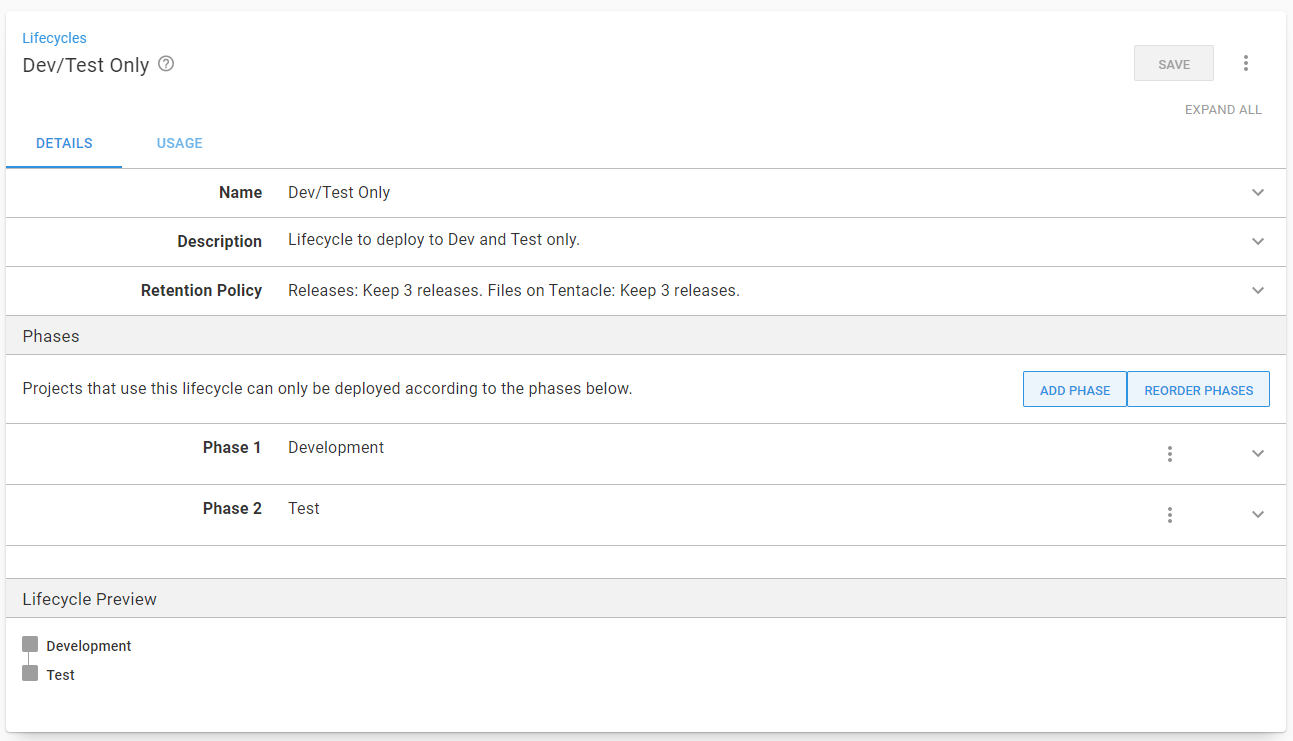 After the lifecycle has been created, we can add a channel to the project: 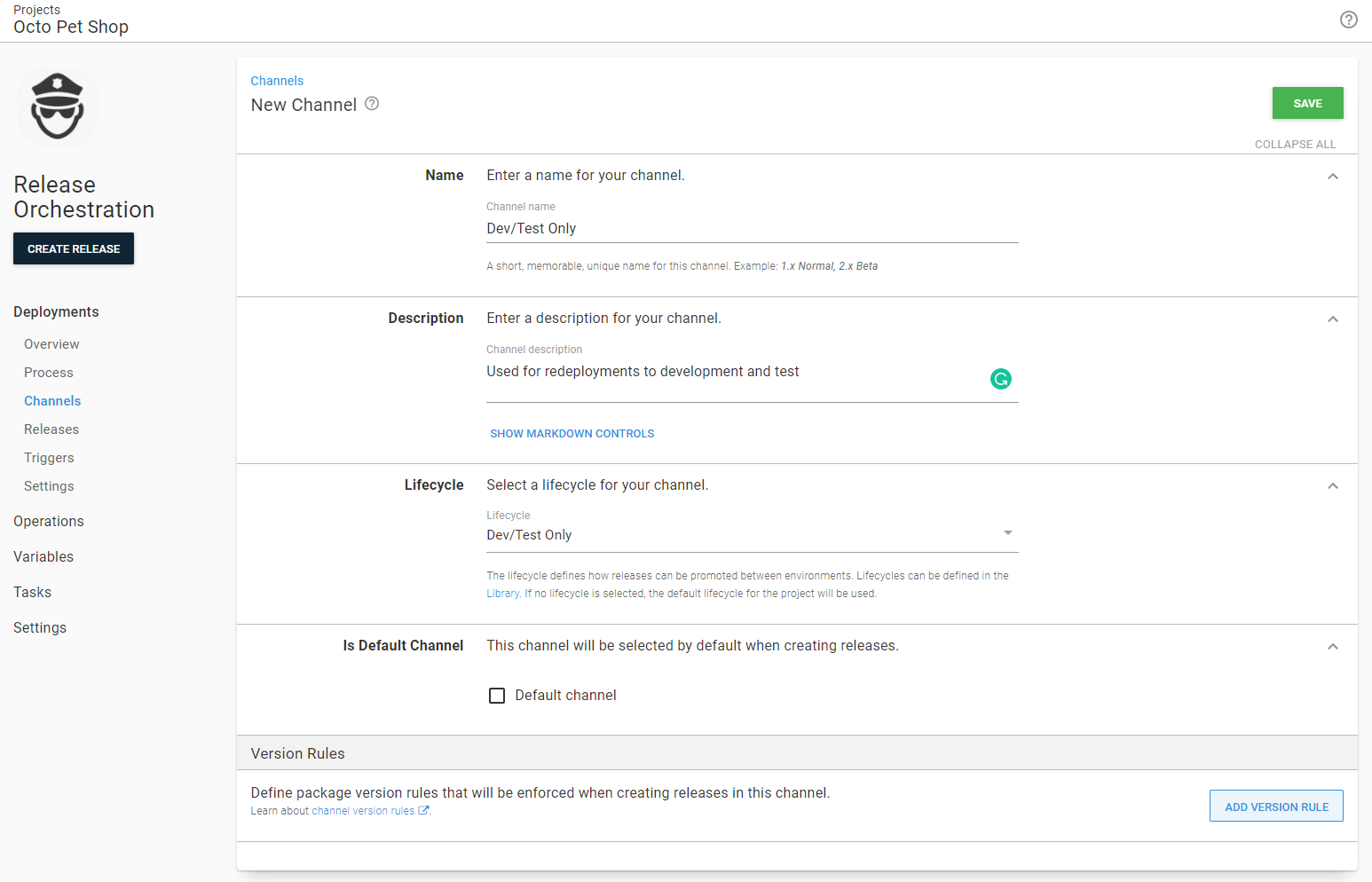 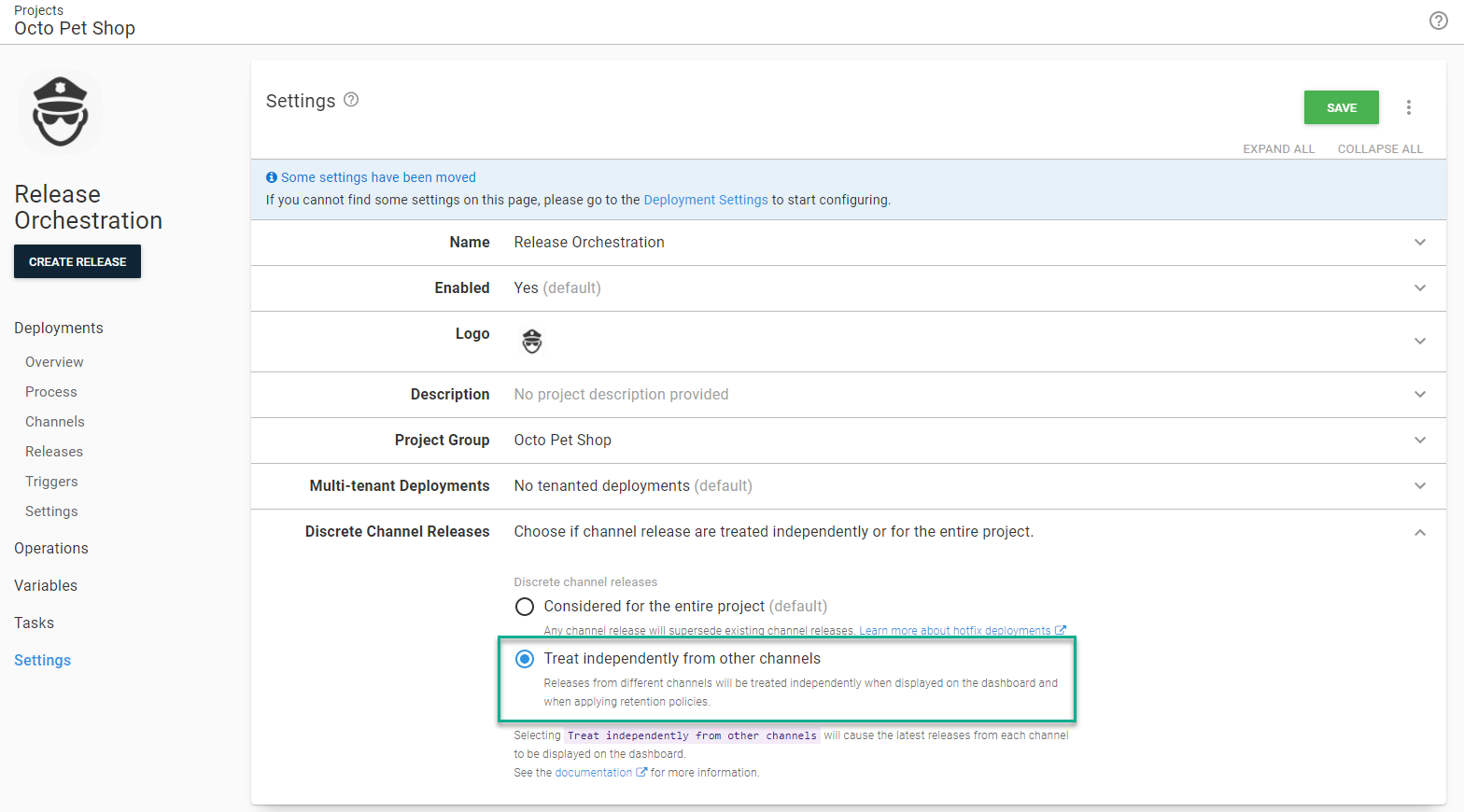 I update my variables to: 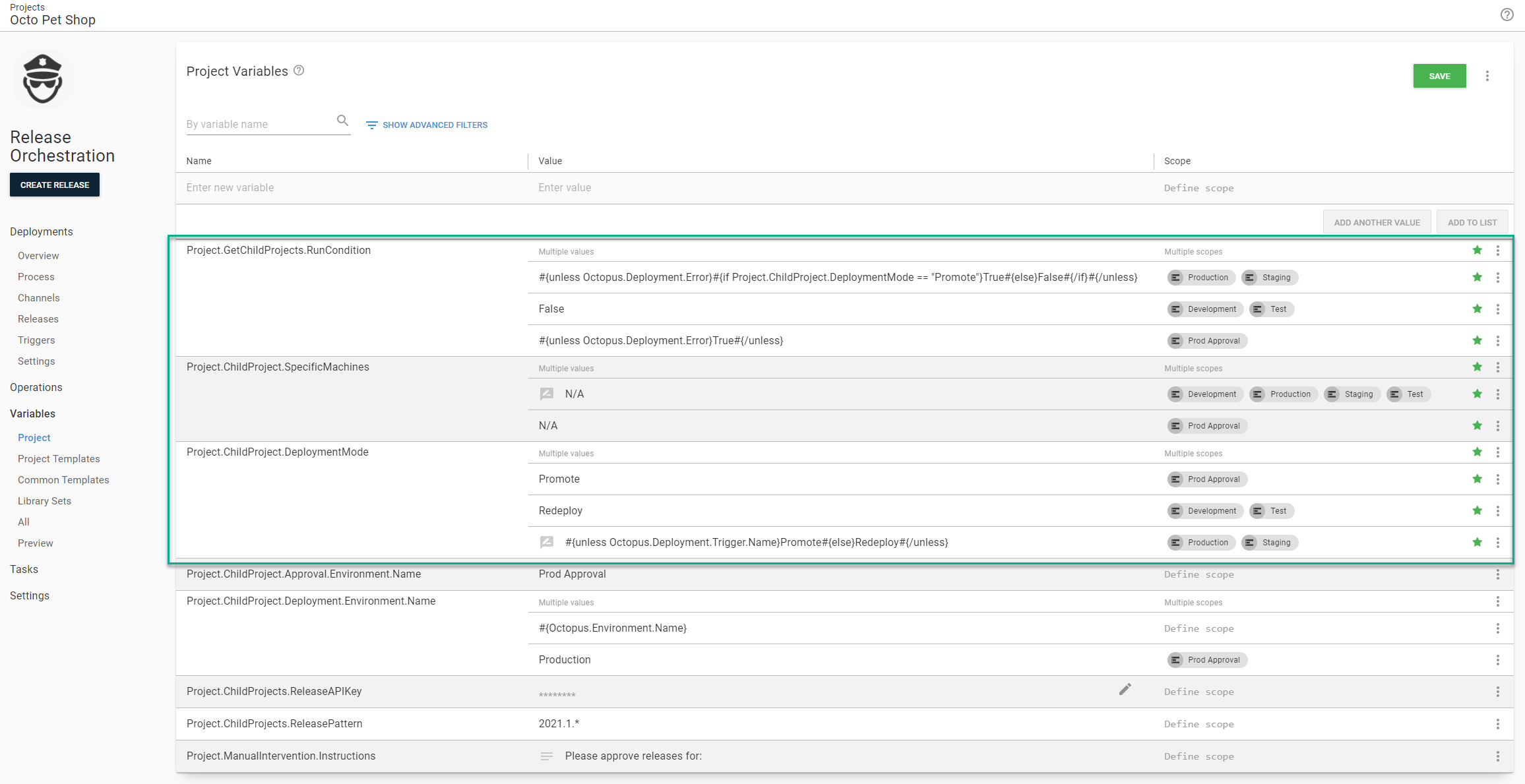 Release for redeployment only

For Development and Test environments, I create a redeploy only release. The step template ignores the version filter and redeploys the latest release. This means I can enter any release number I want.

Deploying the redeployment only release

When I specify a machine name in my prompted variable, as per the screenshot below, the step template translates that into the appropriate Octopus ID and then ensures the child project can deploy to any specified machines. 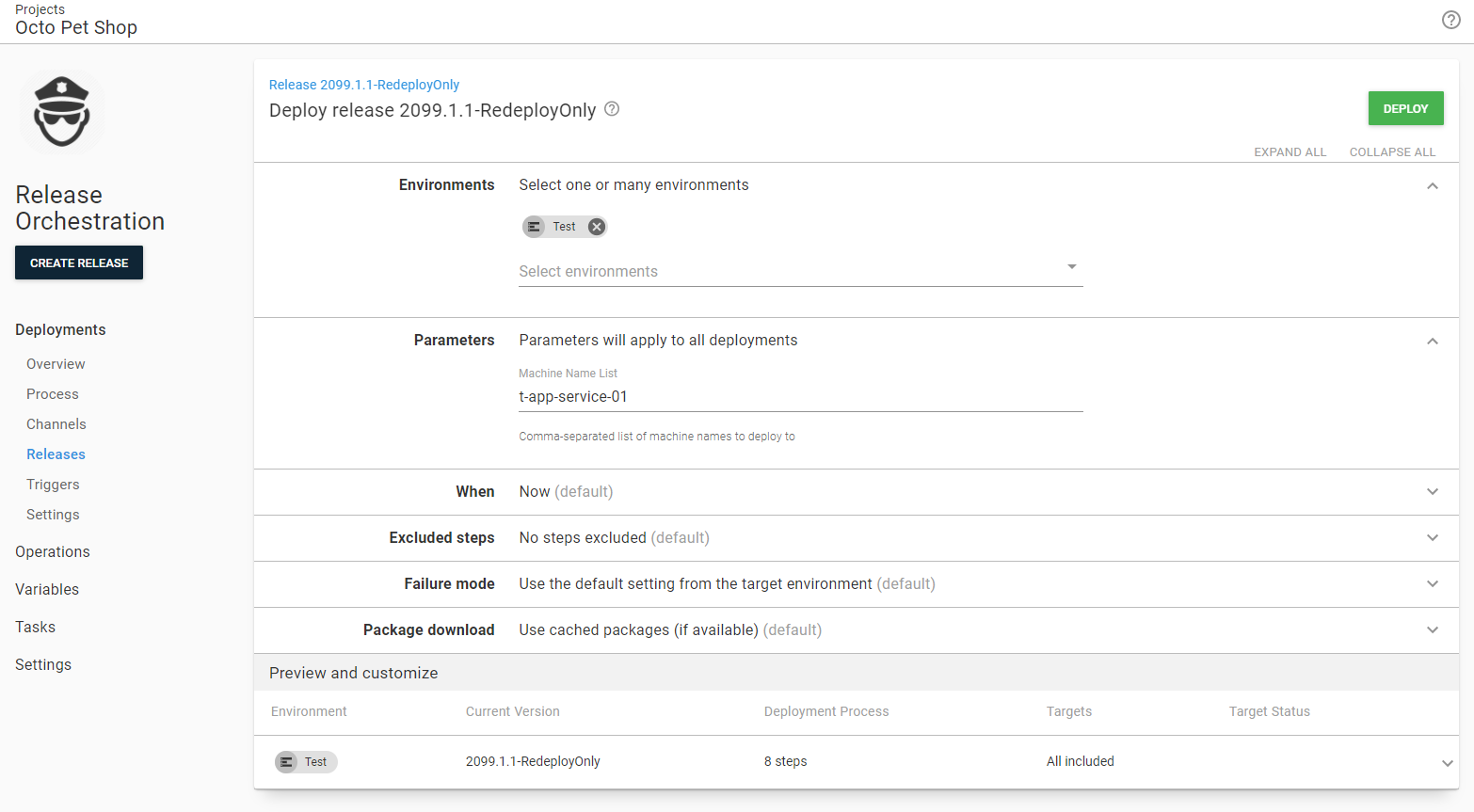 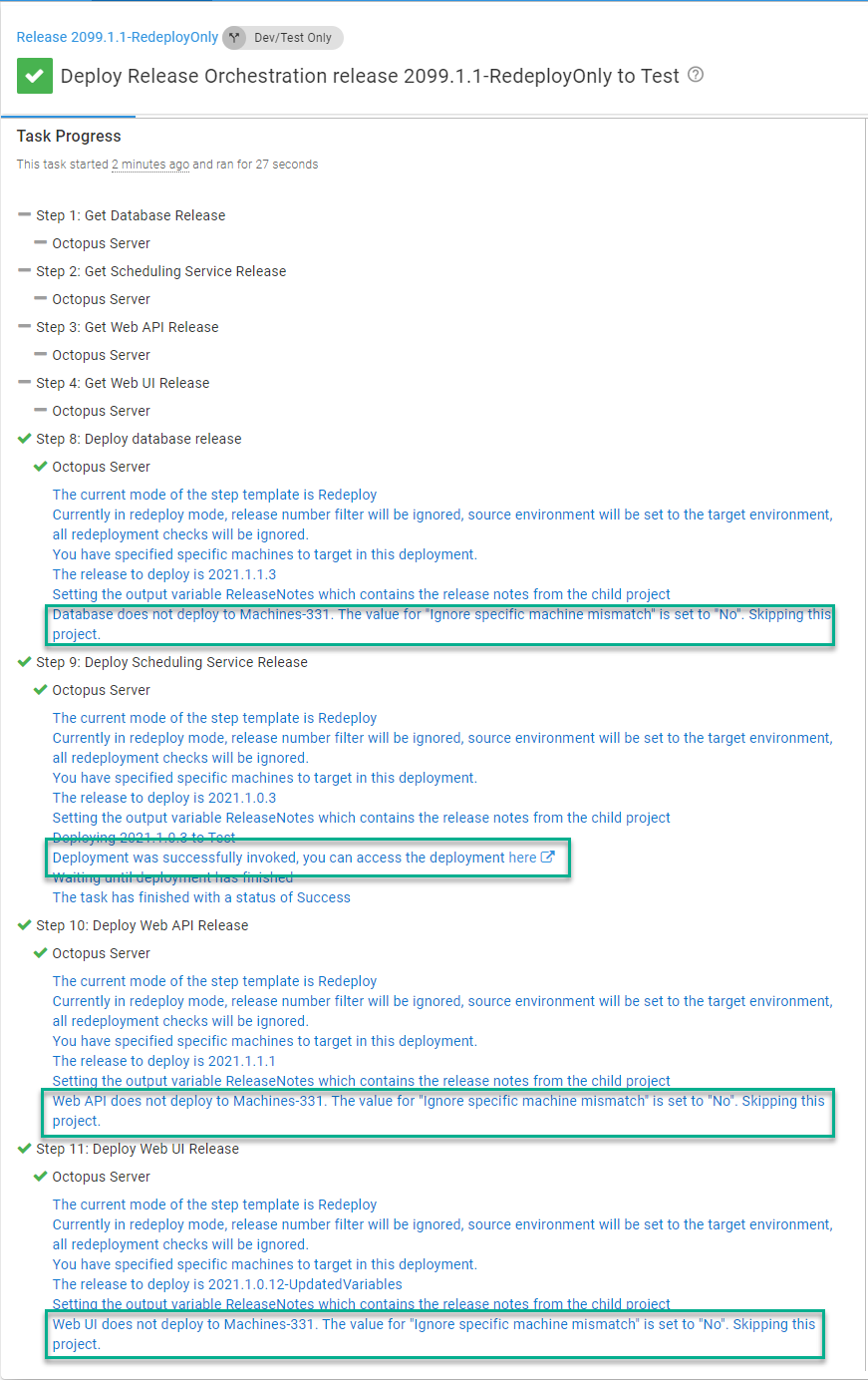 If I don't specify a machine, the redeployment will deploy to all machines for the child projects in that environment. 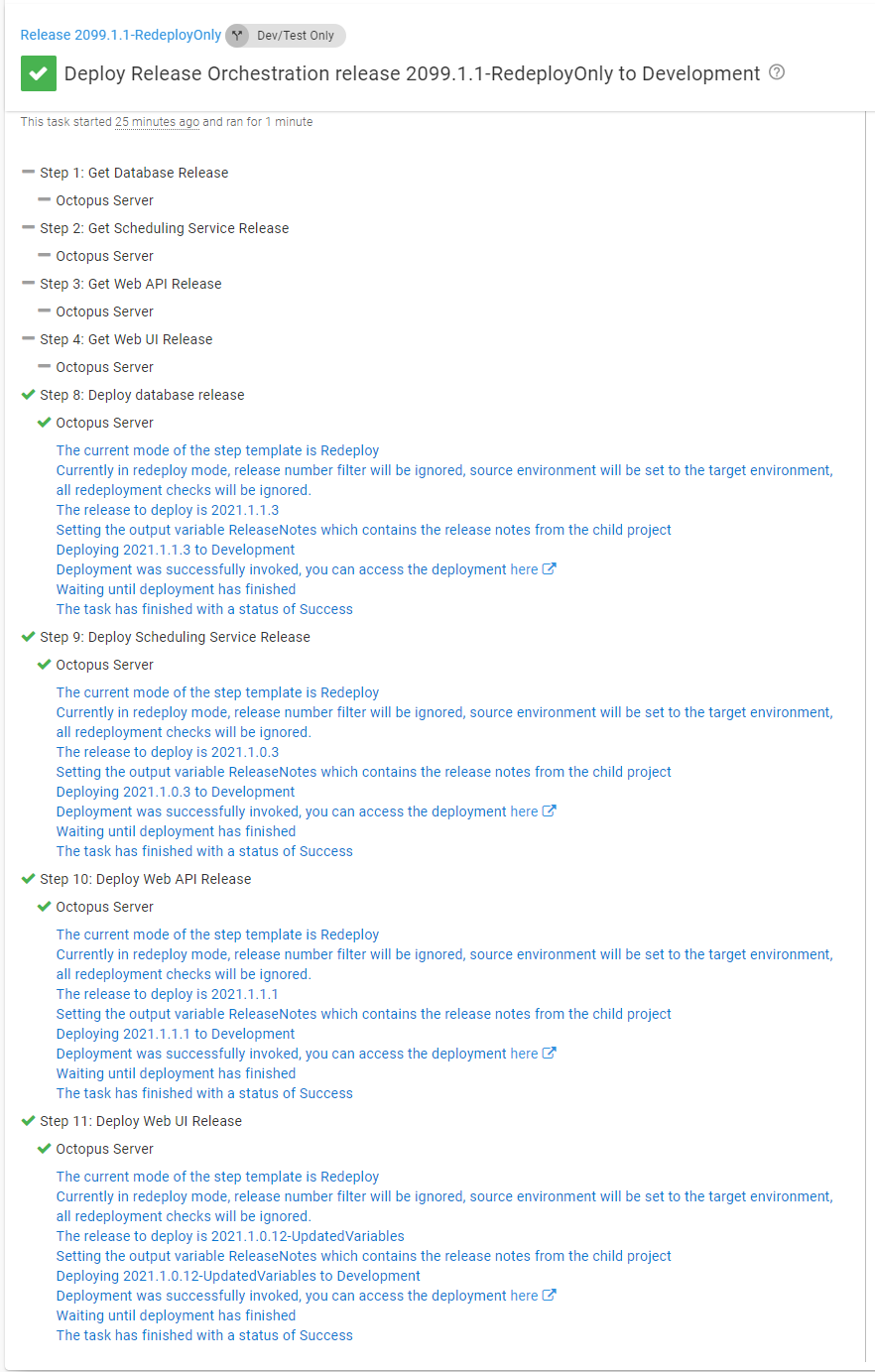 When I started writing the step template, Deploy Child Octopus Deploy Project, my goal was to help with promoting from one environment to another. After receiving feedback though, I realized that supporting redeployments for a suite of application components was useful too.

I hope that with a few modifications to your deployment process, you can take advantage of this redeploy functionality.