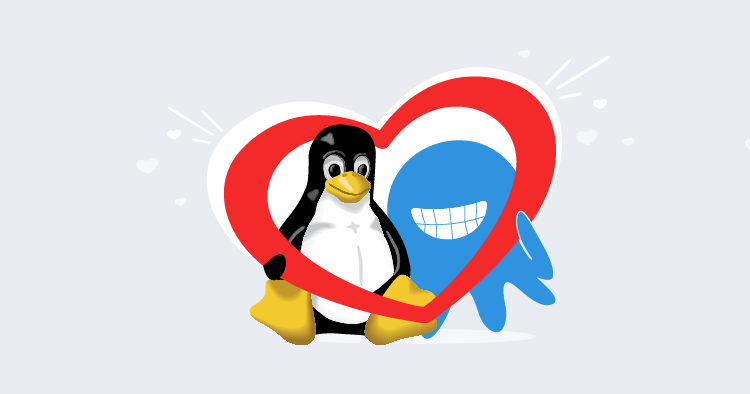 Chances are you are familiar with the features Octopus provides to manage and deploy your code. These days cloud services like AWS and tools like Ansible turn your infrastructure into code too, so why not deploy your Ansible, Chef or Puppet scripts with Octopus?

In this blog post I'll run you through the process of creating a simple Windows instance in AWS using Ansible and Octopus Deploy.

Why Use Octopus with Ansible?

Before we get into the details of running Ansible scripts in Octopus, a natural question is why would you do this? There are a couple of benefits to using Octopus for infrastructure deployments.

Getting the Source Code

The Ansible code used in this blog post can be found in GitHub.

While Ansible has support for configuring Windows targets, it is not designed to be run from a Windows host. The documentation says that:

Running Ansible from a Windows control machine directly is not a goal of the project.

This means we need to create a Linux instance that will run the Ansible scripts on behalf of Octopus.

Of course we can use Ansible to create this Linux host!

But before we start creating instances, we first need an IAM role called AnsibleWorker that we can assign to EC2 instances that will be running Ansible on our behalf.

This role will need the ability to create, query and destroy EC2 instances. In this case we are only working in the us-east-1 region, so we'll only give the role permissions in that region. This IAM policy will grant these permissions.

Something that always trips me up with these IAM policies is when to use "Resource": "*" and when to use an ARN.

We'll also need to allow this role to assume itself using the AWS Security Token Service. We'll make use of STS in Ansible to generate the tokens (i.e. the access token, secret token and session token) that Ansible AWS steps require to function.

Finally the role will need to trust itself in order for the STS tokens to be generated. You can configure this trust via the AWS web console by clicking the Trust relationships tab in the IAM role and allowing the role trust itself to run the sts:AssumeRole action.

To work around this we will be running the Ansible script that creates the Ansible worker locally. So you will need a Linux instance to run this initial Ansible playbook. See the Ansible Installation docs to get your local environment up and running.

Although the Windows Linux Subsystem (i.e. Bash on Windows) is not officially supported by either Microsoft or Ansible, I have used it pretty extensively with Ansible without any issues.

You will also need to install the AWS CLI tools.

Ensure that you have configured your AWS credentials with an account that has permissions to create EC2 instances using the command:

The Ansible YML file shown below defines the tasks run by a role that will create a Centos 7 EC2 instance in AWS and configure it with everything we need to run Ansible scripts.

In this example I am placing the EC2 instance into the default VPC. If you have a custom VPC, you'll need to set the vpc_subnet_id option, and maybe also add the assign_public_ip option.

I got the AMI ID from the list from https://wiki.centos.org/Cloud/AWS.

Some EC2 instance types are only available inside a VPC. See this documentation for a list that require a VPC.

Once the Centos instance is up and running, we then need to install the packages required by Octopus and Ansible.

You will notice that this role adds a SSH key called ansible_rsa.pub. You can generate this file using the command:

Keep both the ansible_rsa and ansible_rsa.pub files, because we'll need them later on.

The example GIT repo includes the ansible_rsa.pub file, but you won't actually be able to use this public key as doesn't include the ansible_rsa private key file. You'll need to generate your own key pair and replace the public key to log into the Linux instance.

To actually communicate with the new Linux instance, Ansible needs to know what SSH private key file to use. This is defined in the group_vars\centos_server.yml file. You'll need to point the ansible_ssh_private_key_file setting to the location of the PEM file that matches the key_name that was defined in the roles\centos-7-server-instance\tasks\main.yml file.

We then need to run both these roles from a playbook.

Run the playbook with the command:

The end result of this Ansible script will be an EC2 instance running Centos that has Mono and Ansible installed ready to be used as a worker in Octopus.

For the purposes of this demo we will use Octopus and Ansible to construct a Windows 2016 server EC2 instance.

The process here is much the same as creating a Centos EC2 instance, but the user data has some interesting steps that make using the Windows instance easier.

You can find more details about the preparation of a Windows system for Anisble here.

Change TheWindowsPassword to something that conforms to the required password complexity rules. If you leave the password as this default, the Powershell script won't work as expected.

There are some additional group variables that need to be defined to allow Ansible to interact with the newly created Windows instance. These are defined in the group_vars\windows_server.yml file.

We'll install Chrome onto this server, because I really hate trying to get anything done in IE on a fresh Windows Server install.

This role is run with the windows-server.yml playbook.

This playbook can be run with the command:

Now that we have our Ansible scripts in place, we can create a versioned package that can be pushed to Octopus Deploy.

Because these scripts are hosted in GIT, we can use GIT to create a ZIP file. This has the benefit of not including the .git directory, as well as excluding any files not tracked by GIT.

This package can then be pushed to Octopus using the CLI tool.

The EC2 instance we created at the start of the blog now needs to be configured in Octopus. We'll add it as a SSH target, using the ansible_rsa private key to establish a connection. 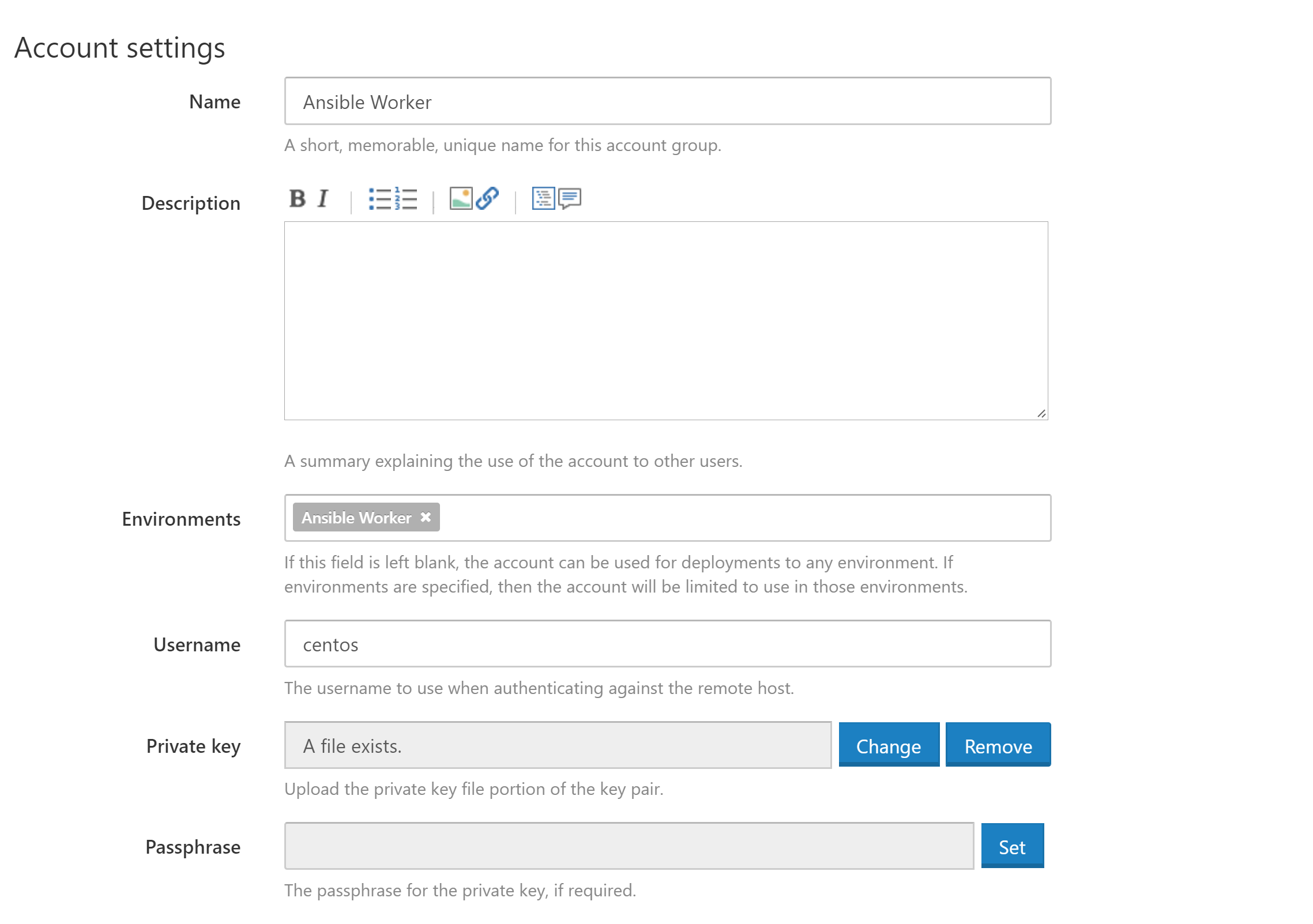 With a CI server like Bamboo you would typically have a pool of workers, and a job could be sent to any free worker instance. So one unit of work (usually an application build in Bamboo) is assigned to one worker.

Being primarily concerned with deployments, Octopus will take a package and install it on all targets. So one unit of work (a deployment in Octopus) is assigned to all targets.

Here we are creating a Octopus target and calling it a "worker". This works because we have one target, and Octopus will queue up deployments (or executions of Ansible playbooks in this case) to this one target.

Today Octopus doesn't have the notion of a pool of workers, one of which can be selected to run an individual unit of work. But if we only have one "worker" target then jobs will be queued as we expect.

Running the Ansible playbook is a 2 step process.

First we extract the package that contains the Ansible code that was pushed to Octopus in a previous step. This is done via the Deploy a package step, where the Ansible package is extracted into the /var/octopus/scripts directory on the worker. 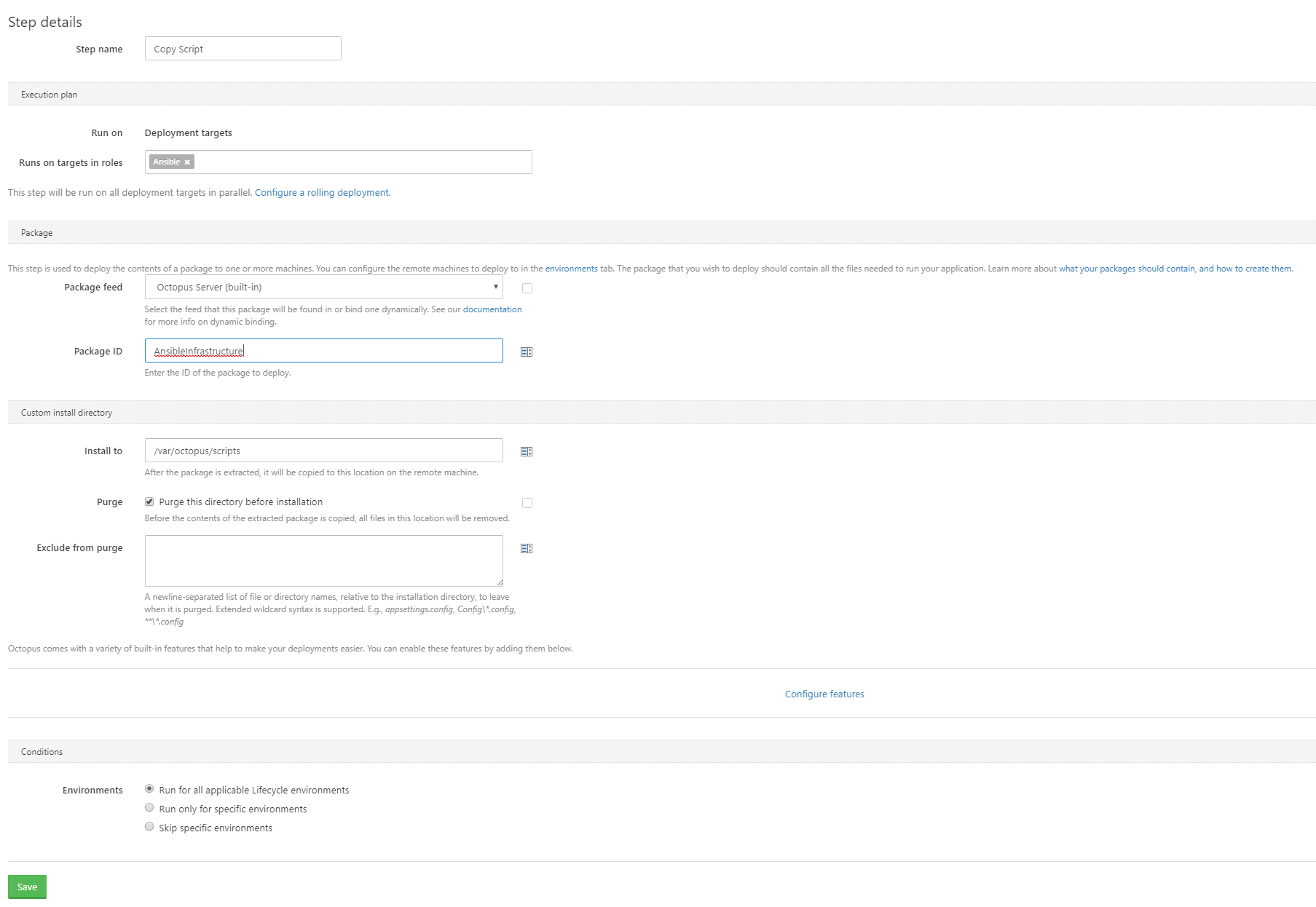 Next we run the Ansible playbook. This is done via a Run a Script step.

ANSIBLE_HOST_KEY_CHECKING=False is used to prevent SSH from prompting to trust the SSL target. It is not actually used with a Windows target, but you'll want to use it with Linux targets.

The end result of this process is a EC2 "worker" instance that can be used to run Ansible scripts on behalf of Octopus, and an example of an Ansible script that deploys a Windows server instance.

I hope you can see how easy it is to deploy your infrastructure as code, and how you can then build on this to take advantage of all the management features in Octopus that developers take for granted.