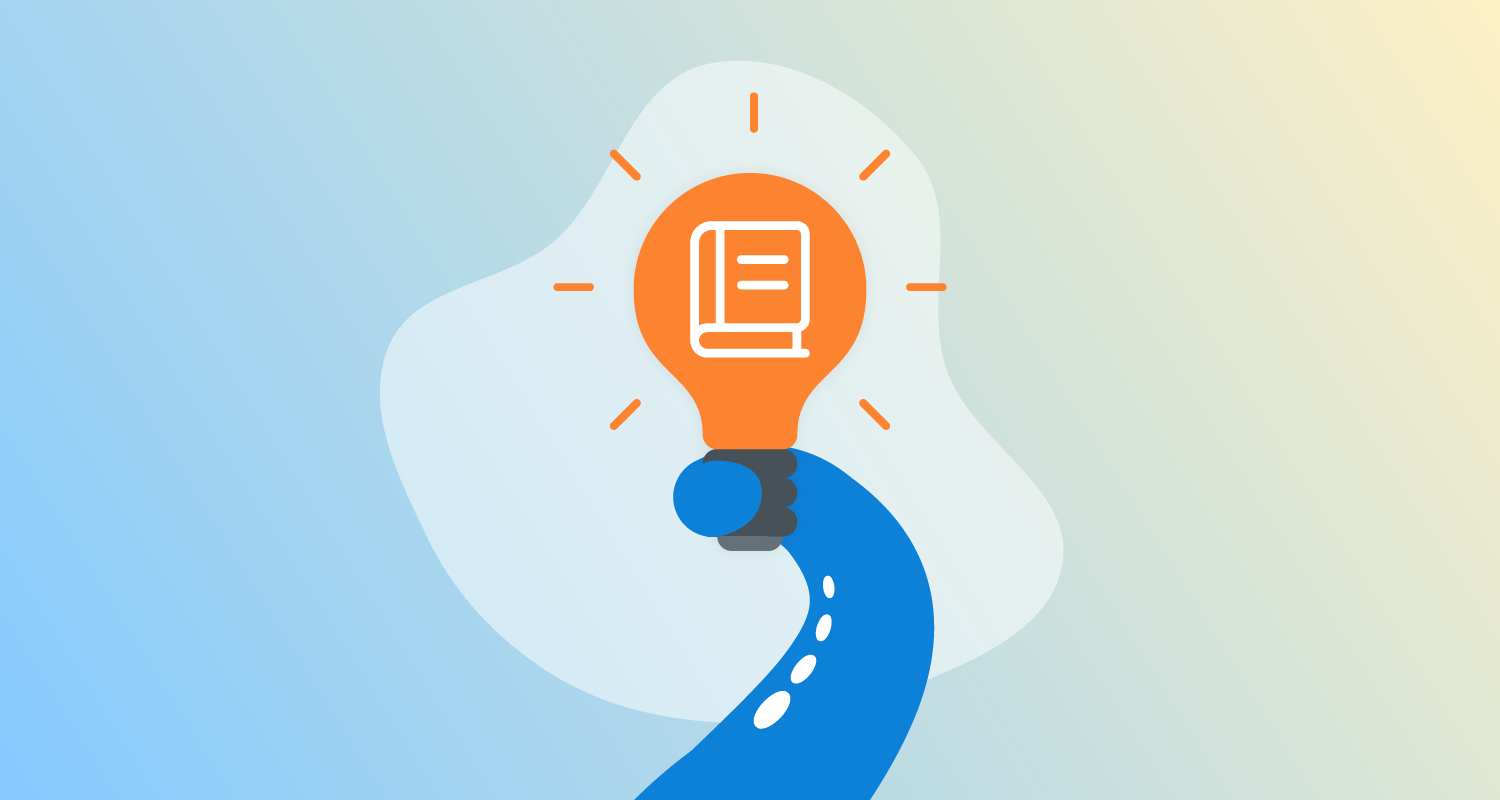 When we first released Runbooks, I had the chance to create a number of them and I learned some lessons you might find helpful.

Defining the problem to solve

At Octopus, we use AWS and Azure for our infrastructure. In fact, at the time of writing (this post was originally published in November 2020), the only infrastructure in Brisbane’s home office is a WiFi router and a network switch. Despite being heavy cloud users, many of us run a hypervisor in our home offices. It lets us configure and run permanent VMs such as domain controllers and SQL Servers to use with Octopus Deploy. It’s one thing to have someone set it up for you, but it’s entirely different to set it up from scratch.

The problem to solve: I have a couple of SQL Servers running and I want to back up several databases on each server to my NAS.

Defining the problem is the first step. Then, my default next step is to add script steps to Octopus Deploy. That's backfired on me many times, so first, I answer these questions:

Use cases, gotchas, and requirements

I’ve used Octopus Deploy to backup databases to my NAS before with the library step template, SQL - Backup Database. It worked okay; the main problem was the library step only supports one database. Backing up multiple databases required multiple steps, and the process required constant tweaking. It also uses SQL Management Objects (SMO), which meant I had to install additional software.

Based on that experience, my requirements are:

Before moving on, let’s quickly examine the script this runbook will run. To solve a number of requirements, I need to store configuration options. A little known feature of Octopus Deploy is the ability to store multiple line variable values, such as JSON. Storing data like JSON lets me define an object for my script to use. You can do something similar in your instance by clicking the Open Editor link. 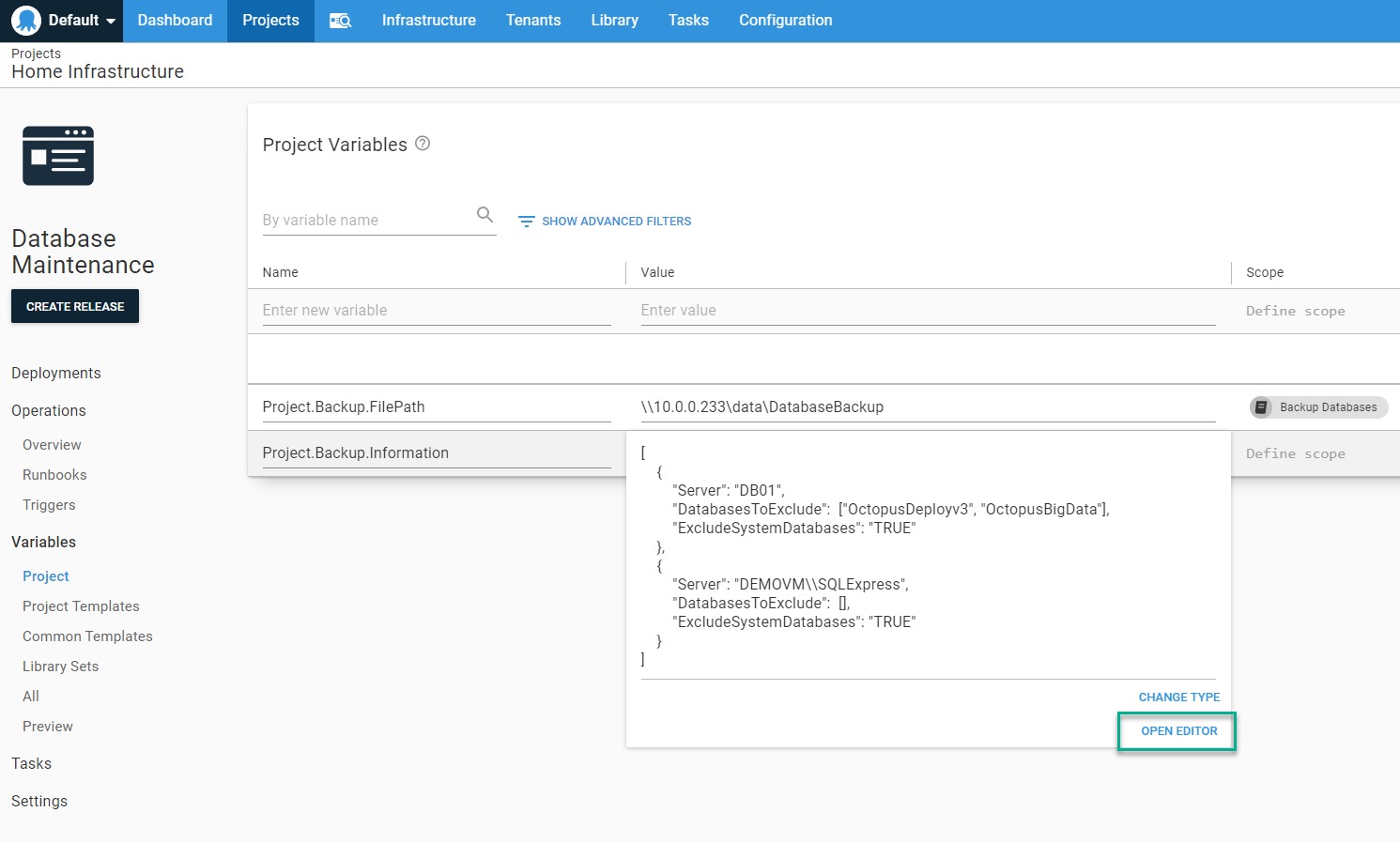 The editor modal window lets you select the type of text in the top right corner. Choosing the type of text adds syntax highlighting to the value window, making it easier to see if the JSON is syntactically correct.

The script itself isn’t complex. For each object in the array, it will:

Where should the runbook run?

The runbook will invoke t-sql commands over port 1433 to back up the database. The good news is Tentacles don’t have to be installed directly on the SQL Server (and our documentation about installing Tentacles and Workers for database deployments recommends you don't install a Tentacle on the same server as SQL Server).

One requirement is the user performing the backup should only have permission to do the backup. Also, several requirements indicate this process should be easy to use and trivial to maintain. Those requirements are solved by running the Tentacle as a domain account. That domain account will be assigned db_backupoperator and db_datareader roles.

And like our docs recommend, the Tentacle is registered as a Worker in Octopus Deploy. I create a new Worker Pool Database Backup Worker Pool to isolate these Workers from other database deployment Workers.

I don’t want to think about backups; they should happen automatically via a trigger. What does require thinking is what environment the runbook should run in. I want this runbook to run across all environments at the same time. For simplicity, I create a new environment called Maintenance for this runbook. I could use Production, but that would be confusing as it connects to a SQL Server in the Test environment.

Recommendation: A maintenance environment can be handy for other cross-cutting runbooks. However, this means there's a process to touch both Test and Production environments. Do a security review of the process to make sure you're not accidentally exposing yourself to additional risk.

Although a hands-off process, I want to know when an error occurs. The process always sends out an email when it's finished, even if it fails. Setting the run condition to be Always Run achieves this requirement. 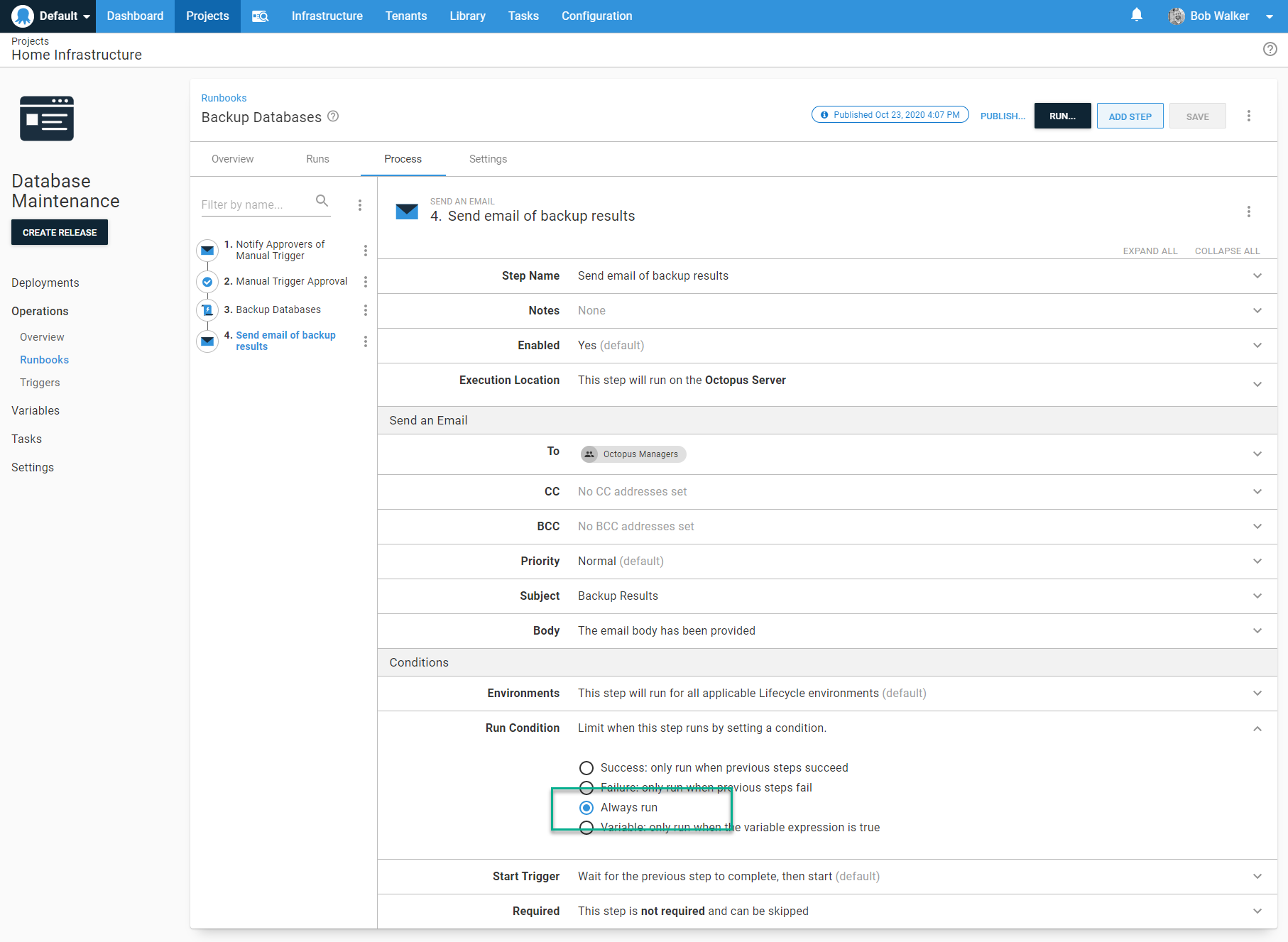 Although it's hands-off, it makes sense to require approval if a person triggers the runbook in a real-world use case. Thankfully, approvals can be conditional in Octopus using variable run conditions. The syntax to trigger a manual intervention when a person invokes the runbook is #{unless Octopus.Deployment.Trigger.Name}True#{/unless}. The variable says that unless a trigger triggers this, then run this step. 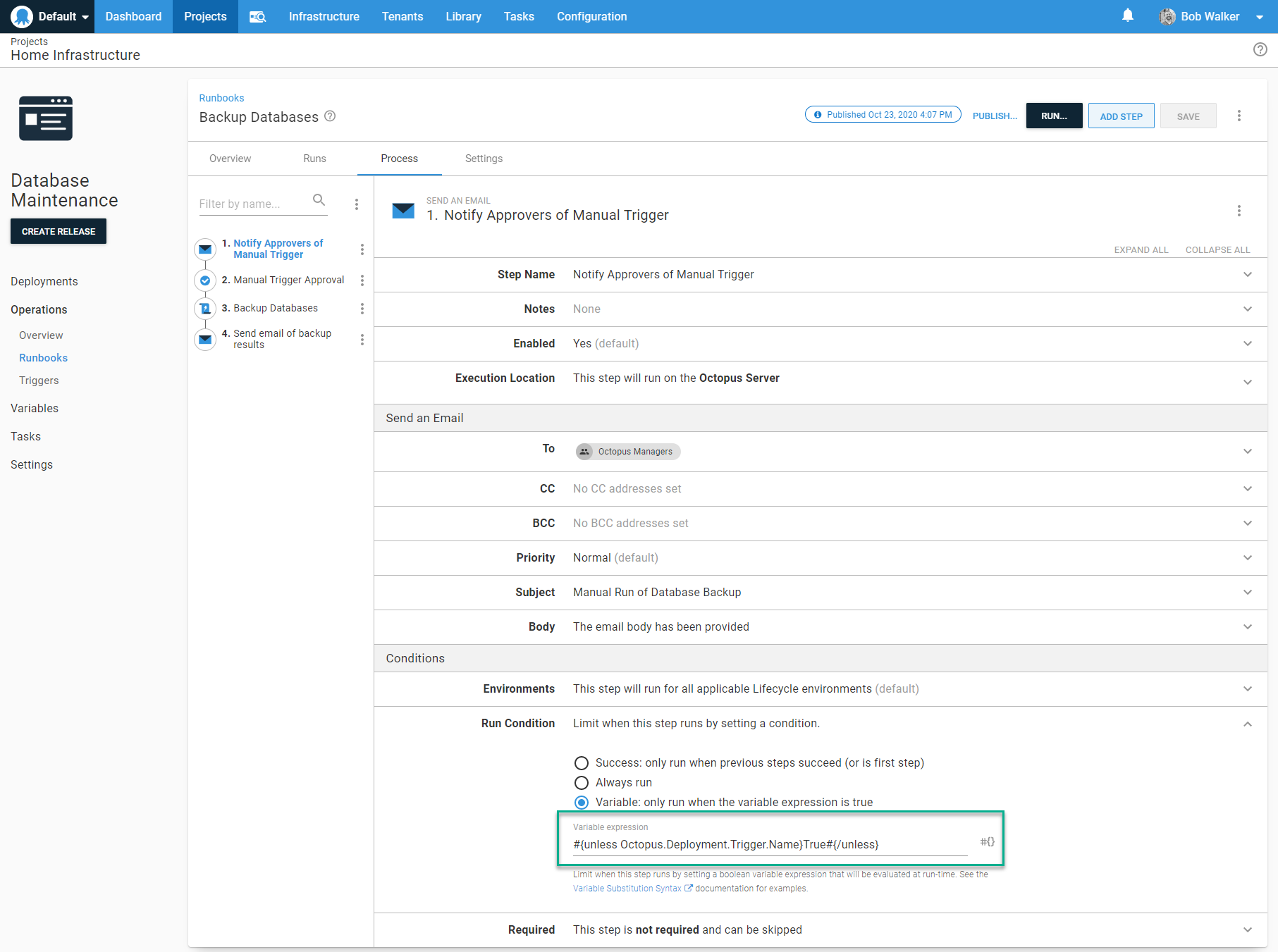 You might notice the script is capturing logs and setting an output variable. The contents of that output variable are sent in the results email. It also uses write-highlight to add text to the task summary. 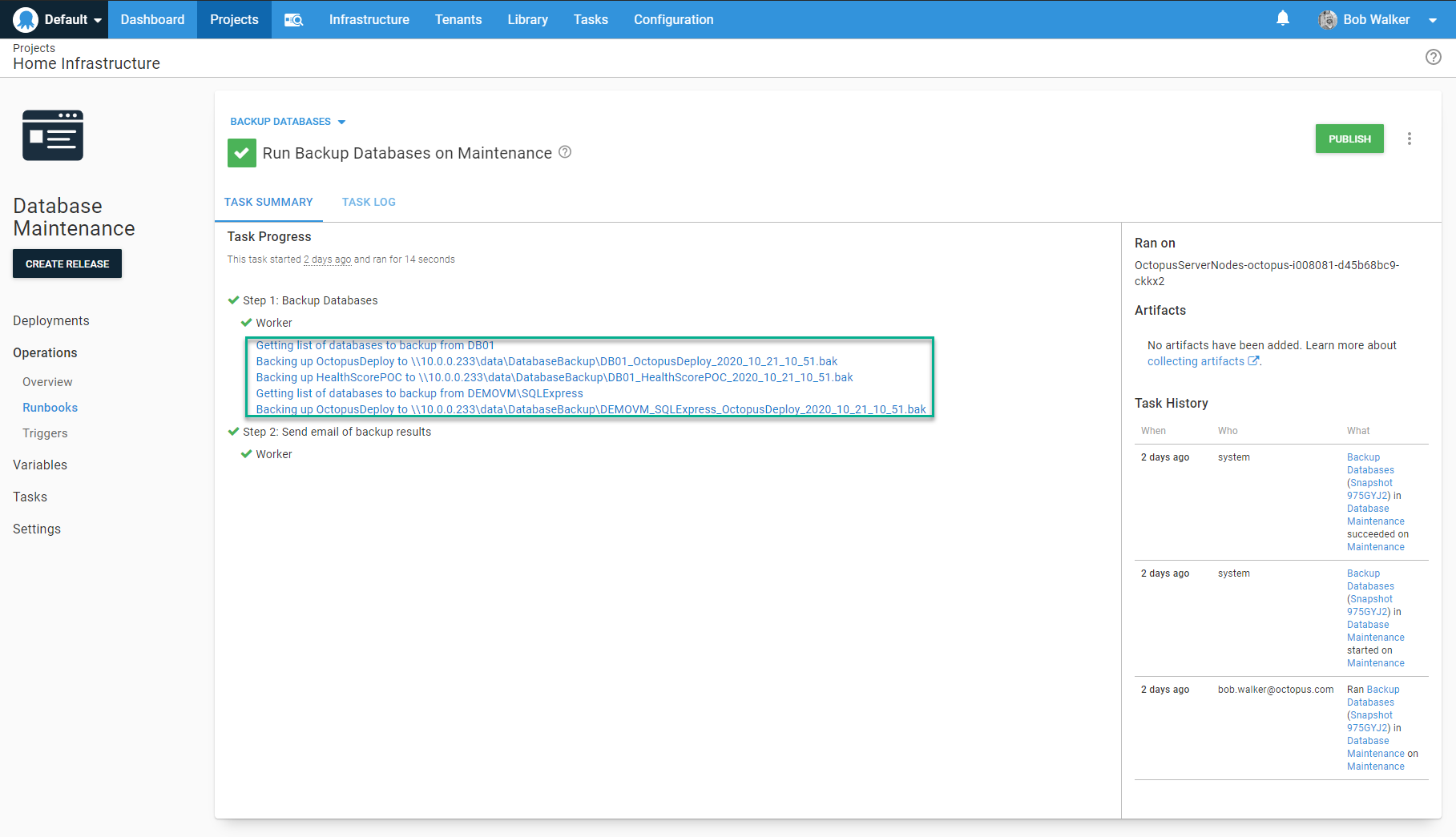 For my use case, this is all the logging and retention policy I need. As this backup is happening each day, I don’t need to keep these logs around for long. I reduced the retention policy from the default of 100 to 10.

Retention policies delete the run but not the task in the audit log. To look at the run history, I go to the audit log and find it using advanced filters and date filters. 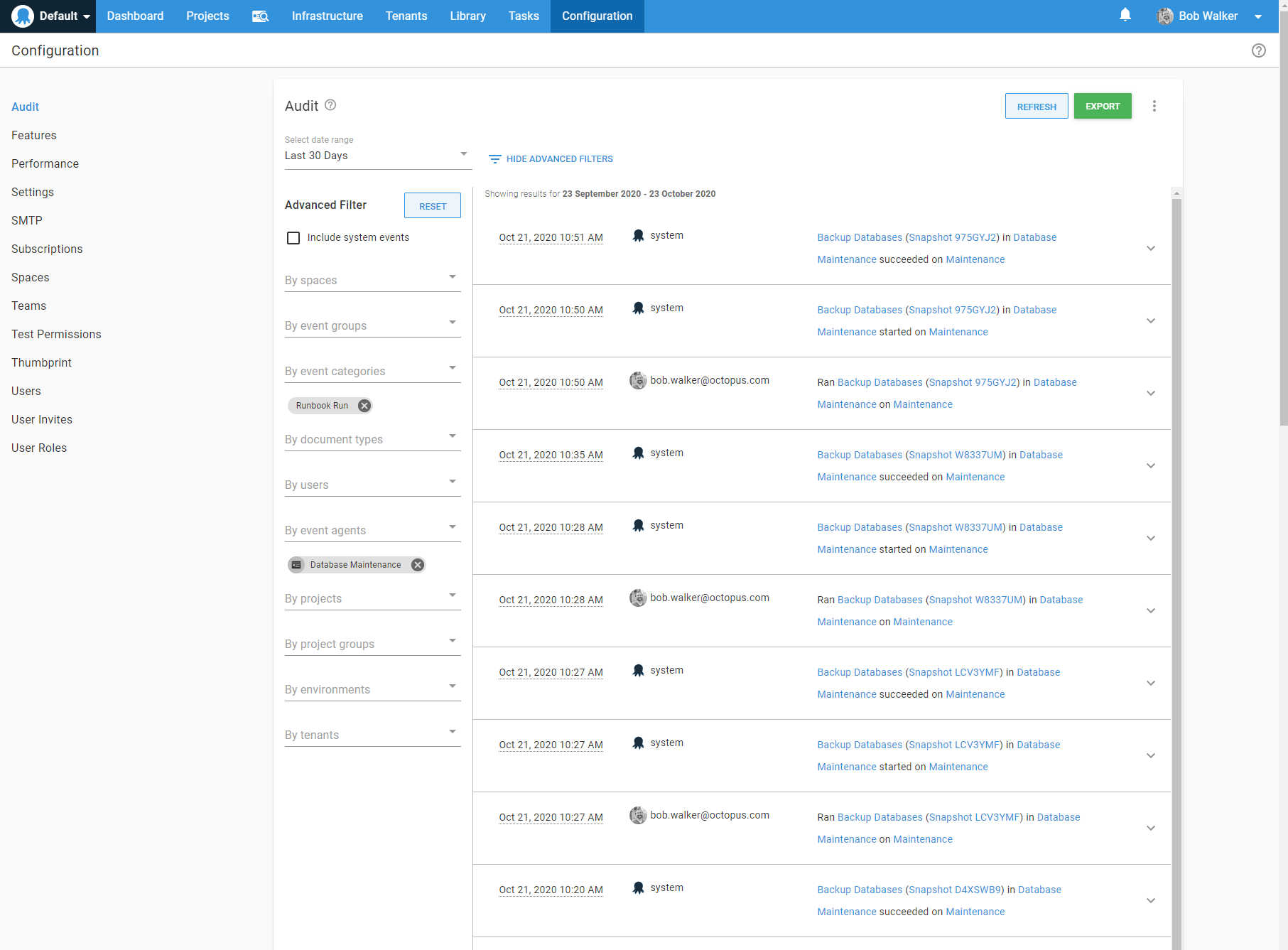 Recommendation: Retention policies are configured per runbook. Double-check your company’s audit policy to ensure Octopus Deploy doesn’t clean up a run before it's supposed to.

Runbooks are a great tool to enable self-service DevOps. Like any tool, though, it's possible to misuse it. I hope these recommendations help you design runbooks you can use in your Octopus Deploy instance.

A final recommendation: don’t design runbooks in a silo. If you're a developer, collaborate with the appropriate operations person (or vice versa). Start collaborating during the design phase. Collaboration helps flesh out requirements, and you end up with a process everyone is comfortable supporting.